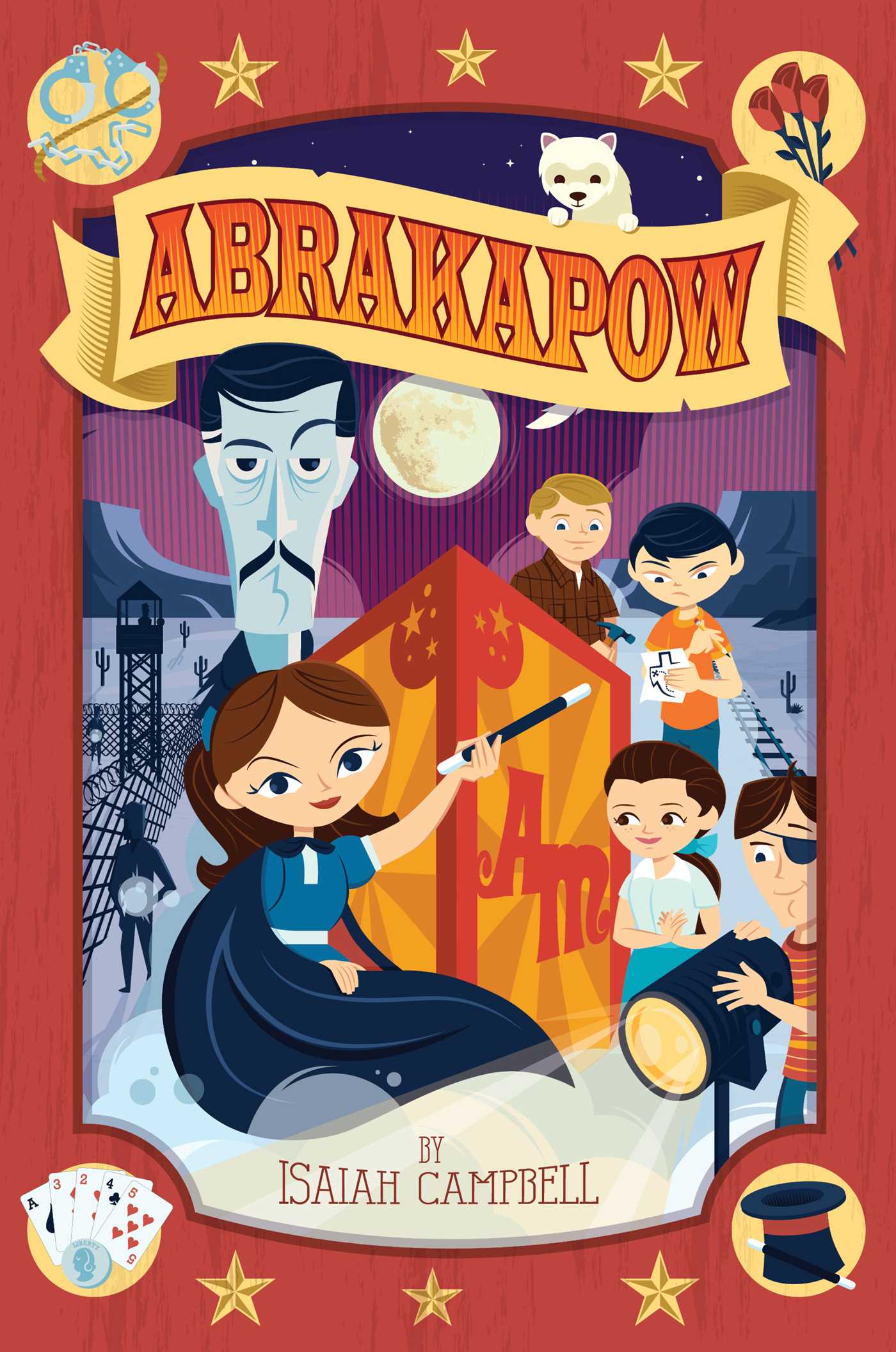 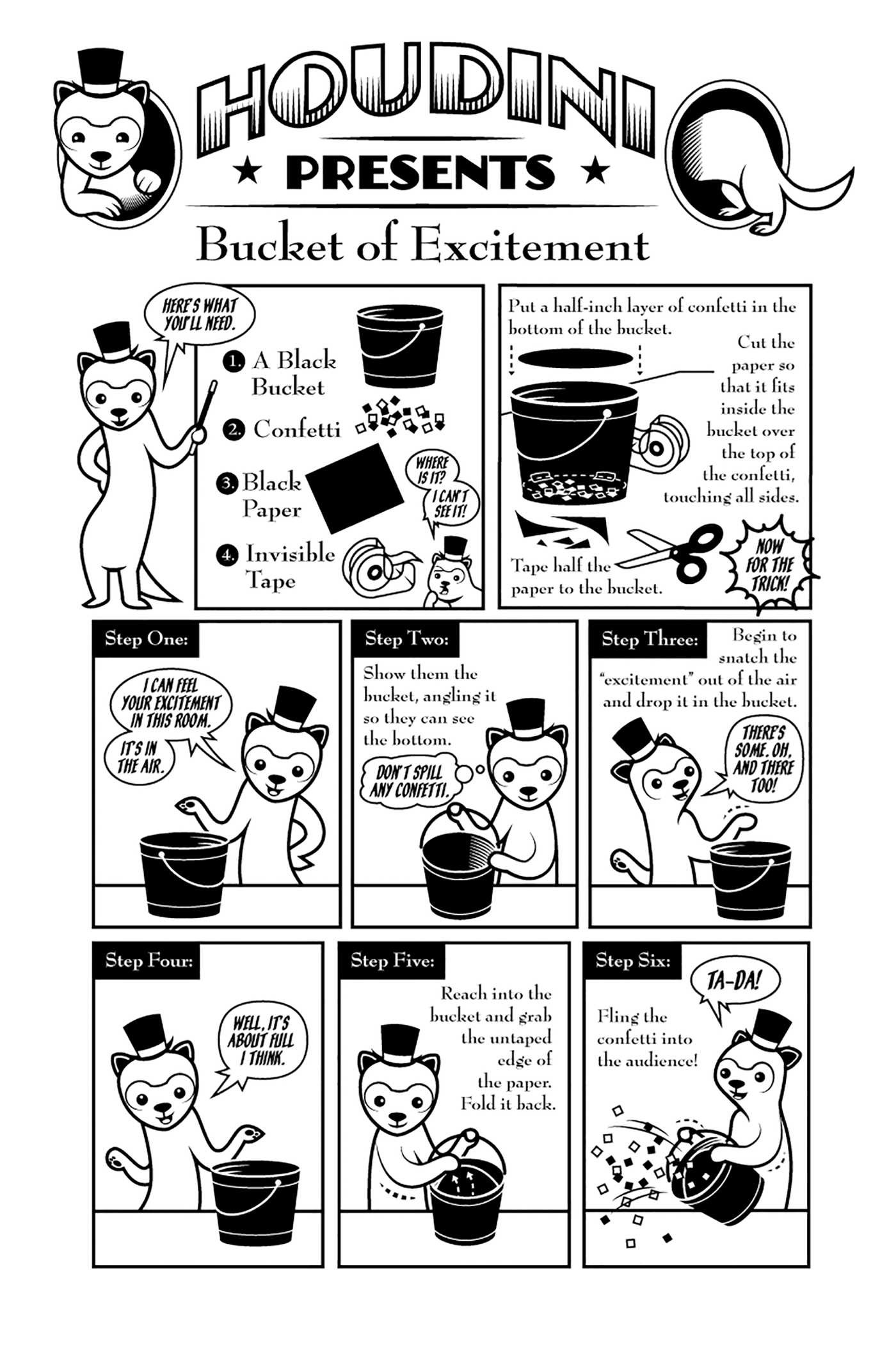 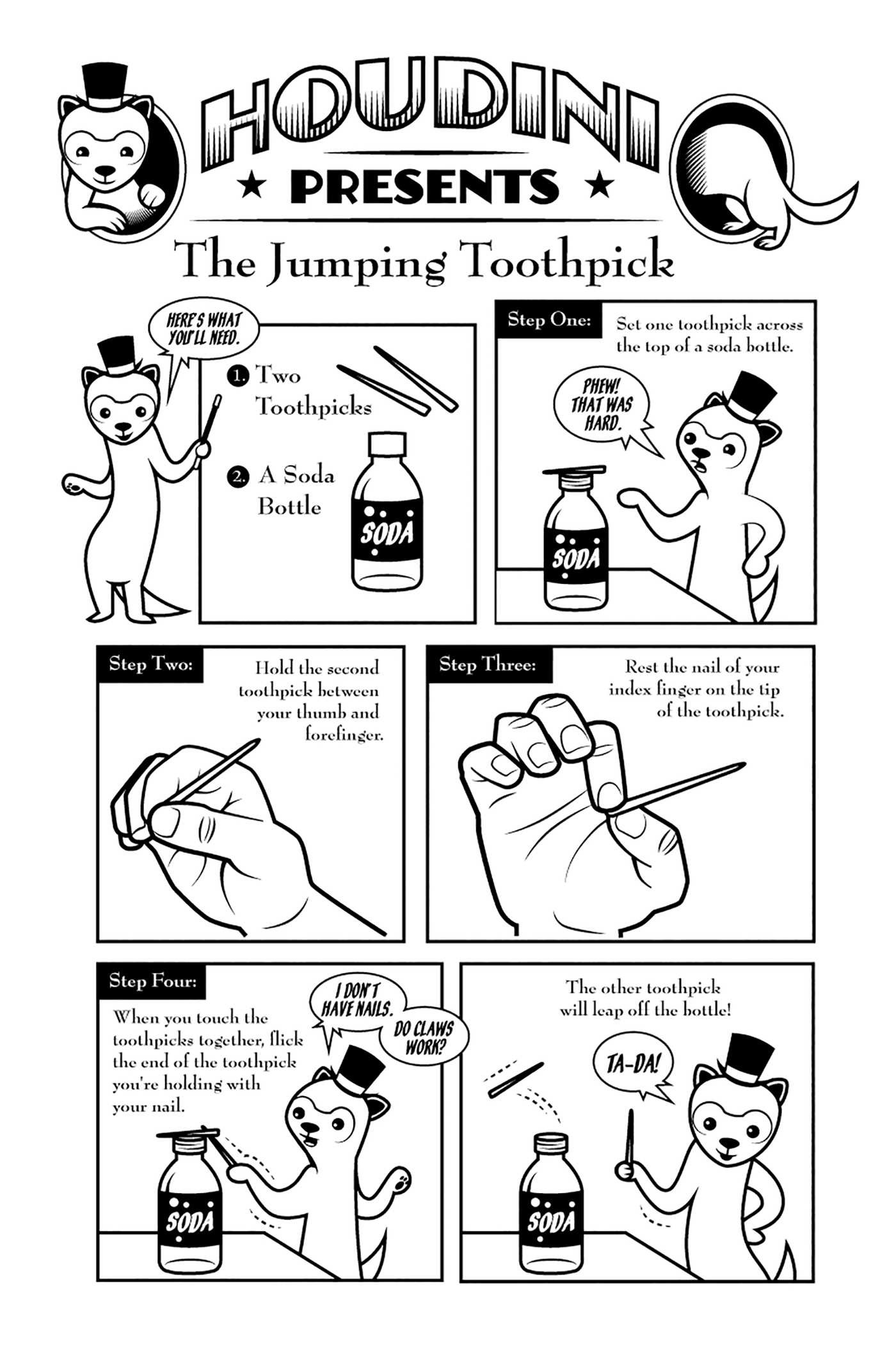 Based on a true World War II story, Isaiah Campbell tells a charming mystery about a mishap at a magic show at a POW camp—featuring magic how-to diagrams throughout.

Try as she might, cheeky middle schooler Maxine Larousse (you may call her Max “La Roo” or The Amazing Max, if you’d like) has yet to learn the one magic trick she needs the most: how to reappear in New York City. That is where she used to live with her parents before her father, Major Larousse, was put in charge of a Nazi POW camp in Abilene, Texas. At least in this desolate wasteland she’ll have plenty of time to practice her illusions, even if the only audience member is her ferret Houdini.

When she’s tasked with entertaining the Nazi prisoners with a magic show, the pressure may be too much. But with the help of some classmates and an unexpected magic expert, the performance is a hit—until twelve Nazis escape during her final act. Will she be able to track them down before her reputation as a magician is destroyed forever?

AbrakaPOW Chapter One
“Why, oh why, oh why did we move here?”

Maxine Larousse climbed over the boxes in the moving truck, searching for the three boxes she had specifically labeled were only to be touched by her hands. Even as she looked, she knew she wouldn’t find them. Her mother had selective illiteracy, and the GIs that were helping them move, well, they were GIs after all, far more interested in shooting at Nazis than ensuring an eleven-year-old’s meticulously written instructions were followed to the letter.

“Hey, Buck! Lookie here, I got a magic wand!” one of the GIs yelled from just outside the truck.

Oh gosh, that’s box number two, Max thought with a groan. She stumbled over the walls of cardboard as she rushed off the truck. The blond GI, who she remembered had said his name was Gil, waved her wand around in the air. “Somebody get me a sorcerer’s hat so I can be Mickey Mouse!”

Max fought the horror in her throat and scrambled to snatch the wand from his hand. “Can’t you read, you big gorilla?” she asked and pointed at the box from which the wand had come.

UNAUTHORIZED OPENERS WILL BE IN VIOLATION OF THE

YOU HAVE BEEN WARNED!

Gil scrunched up his forehead as he read the label.

I probably should have made it shorter to account for limited attention spans, Max thought.

He grinned as he finished. “So you’re a magician? That explains your weird-looking bunny.”

She rolled her eyes. “It’s a ferret.”

She ignored his question and carefully placed the wand back in the box.

Buck, the brown-haired GI, came over to try to peek inside. Max slammed the flaps shut.

“You should show us a trick real fast,” Buck said.

“I’m trying,” she said. “I’m making all these boxes disappear.”

“Aw, come on, Squirt,” Gil said and poked her in the ribs. “We’ve been doing all the work here. The least you could do is give us a magic show.”

At what age do boys stop acting like chimpanzees? she wondered.

Mrs. Larousse came out of their new home carrying a pitcher of lemonade on a tray with some glasses. “What’s all this racket I hear?” she said with an air of charm she’d never used back in Brooklyn. The GIs instinctively straightened up, as though the wife of a major deserved a salute like her husband.

“They want me to put on a magic show,” Max said.

Mrs. Larousse placed the tray in the truck’s cargo area and poured lemonade into the glasses. She handed them to the boys. “And? Why don’t you?”

“This isn’t really the place.”

Mrs. Larousse sat next to her tray, her legs dangling off the end of the truck, and straightened out her skirt under her apron. She gave Max the smile that was code for “do this or die” and took a sip from the glass Max had assumed was for her. “Oh, I don’t know. This seems like a magical moment to me.”

Max looked at their yard, with its brown grass and anthills and literally nothing else, and felt the breeze bringing the hot air of Abilene, Texas, wafting across her forehead. This is magic? Then I’ve been doing it wrong. She sighed and wondered if this was finally the time to become the second woman in history—after only the great Madame Adelaide Herrmann—to attempt the BULLET CATCH TRICK. She decided her mother didn’t have the stomach for it and opened the box back up. She found a jar of coins and picked out a quarter.

“Here, take this and examine it closely.” She handed it to Gil.

“You could at least pull it from my ear,” he said. She didn’t laugh. He looked at the front. “Okay, so it’s got the standing liberty on the front, eagle on the back. Hey, it’s 1925. That’s the year I was born!”

“Good, good,” Max said. She tried her best to channel her stage persona, THE AMAZING MAX, even though there was literally nothing bedazzling about this venue. “Now, would you say you would recognize it if I showed it to you again?”

“So, if I had a group of, say, three quarters, could you pick out this exact one?” She took the quarter from his hand and held it up.

“What if there were four? How about then?”

“Even if there were five?” she asked.

“Even if there were twenty-five, I could pick out that quarter.”

“Okay, so you’re pretty smart. In fact, I’ll bet,” she waved her hand over the quarter, and it vanished “even if there were no quarters, you could still pick out that quarter.”

Gil and Buck both stared at her hand in silence. Then they looked at the ground. Then they walked around her to see if she was hiding the quarter behind her back. They made her move to check under her shoe. She even showed them both her hands to prove it was gone.

“Sure, thanks,” Max said. “But what do you say? Could you pick out that quarter even if there were no quarters?”

Gil shook his head. “No, of course not. There aren’t any quarters to pick from.”

“Check your back pocket,” she said.

He slipped his hand into his pants pocket, and then he got the look on his face like a man who had just discovered oil in his backyard. He slowly brought his fingers out to reveal a quarter—liberty standing on the front, eagle on the back, and the year that was so familiar, because it was his birth year, emblazoned on the bottom.

“I knew you could pick it out,” she said. And then she let THE AMAZING MAX go back to sleep. “Mom, seriously, why are you drinking my lemonade?” Her mother begrudgingly handed her the glass.

Gil and Buck started applauding. “Wow, that was amazing! How did you do it?”

She shrugged, swallowed her lemonade, and carried her box into the house. The trick was so simple she was pretty sure it wasn’t covered by the magician’s code, but she wouldn’t give those oafs the satisfaction of an answer.

Besides, that would mean admitting that she had slipped one of her 1925 quarters into Gil’s back pocket thirty minutes earlier, just in case such an illusion proved necessary, and the fact that her hand had been close to his back pocket was a secret she would take to her grave. Other than that detail, though, the trick was a simple matter of palming the other quarter until they were looking on the ground, then slipping it into her own pocket so she could show her empty hands. Way, way too easy.

Max went into her room and set the box on her bed. She barely noticed the rat-tat-tat of Houdini trying to find a way out of his cage over in the corner. Which meant he wasn’t really trying. That little white ferret had earned his name probably a thousand times.

Whoops, make that a thousand and one.

Max plucked Houdini off the floor just as he was scurrying to steal her freshly unpacked shoes. She nuzzled his nose and kissed his stinky head, then she let him go on the floor again and watched him drag the dress shoes that she hoped she’d never wear again under her bed.

He licked his lips and pushed her shoe with his nose. She plopped down next to him and stared in his eyes. “Did you see what I did there, Houdini? I made you believe that I had friends.” She took the shoe and tossed it on top of her dresser. “THE AMAZING MAX strikes again. Ta-da!”

Houdini was far less frustrated with the verbal trick she’d just pulled on him as he was with the fact that her shoe was now out of his reach. He shuffled over under her bed in search of some other item worthy of his thieving efforts.

She got up and plopped on top of her bed. “Oh well, whatever. I have you. And I’ll probably make friends, right? I mean, boring west Texas friends who say ‘y’all’ and ride horses, but friends nonetheless.”

She could hear Buck and Gil outside, mumbling some ignorant version of a magical spell. They must have found box number three. She groaned and got back up. “And maybe, if I’m really lucky, one of those friends could be a capable assistant and we’ll put on the magic show of the century.”

But probably not, she thought to herself, not even wanting to say that last part to Houdini. Finding a kindred spirit here in cowboy land would be a magic trick even I wouldn’t believe.

She hurried out before the GI movers could violate the plainly written instructions and incur a well-deserved dismembering, regardless of how much she secretly would have loved to see that happen. 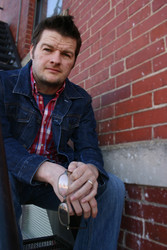 Isaiah Campbell was born and bred in Texas, and spent his childhood reading a blend of Dickens, Dumas, and Stan Lee. He dreamed his whole life of becoming a writer. And also of being bitten by a radioactive spider. Unfortunately, only one dream has panned out. For fifteen years he taught and coached students in writing and the arts before he finally took his own advice and wrote The Troubles of Johnny Cannon and The Struggles of Johnny Cannon. He lives in Philadelphia with his wife, three children, and his sanity, although that may be moving out soon. He occasionally searches the classifieds for the bulk sale of spiders and uranium but hasn’t had any luck yet. Find him online at IsaiahCampbell.com.