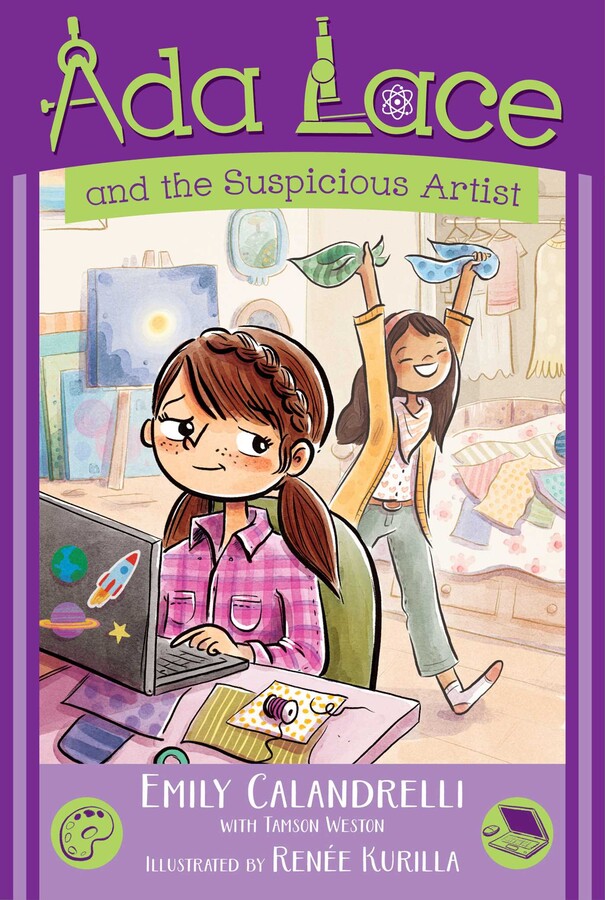 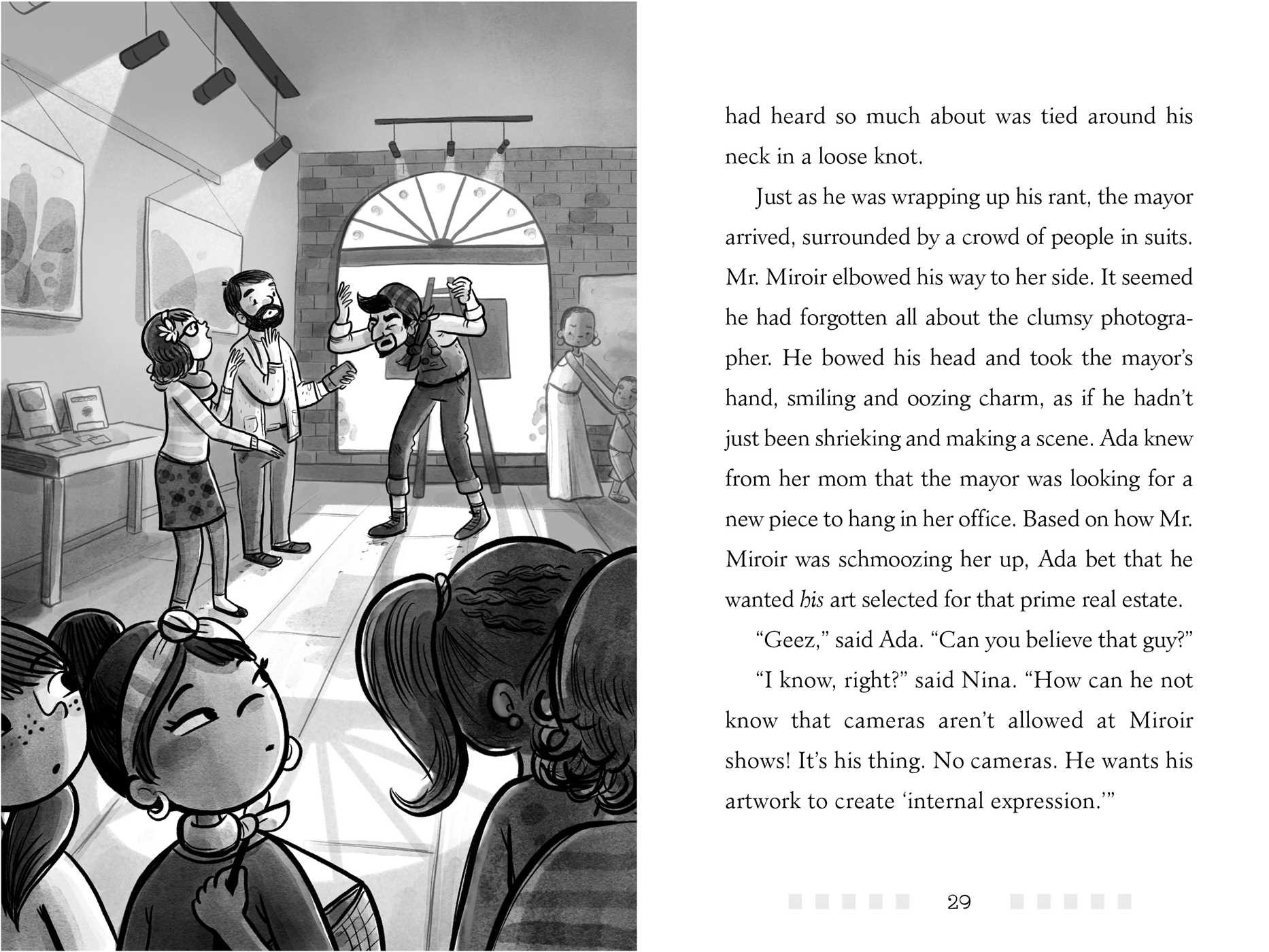 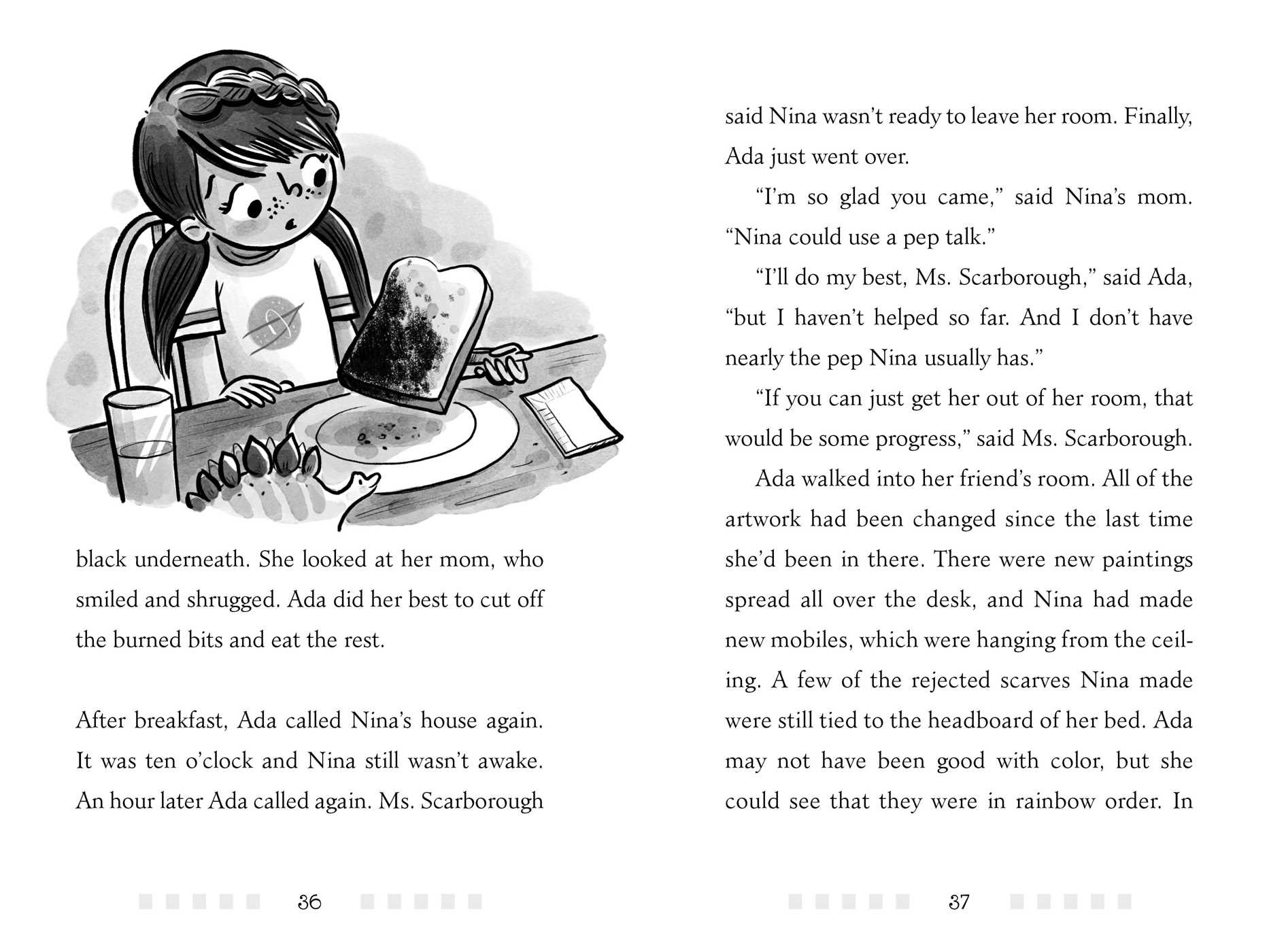 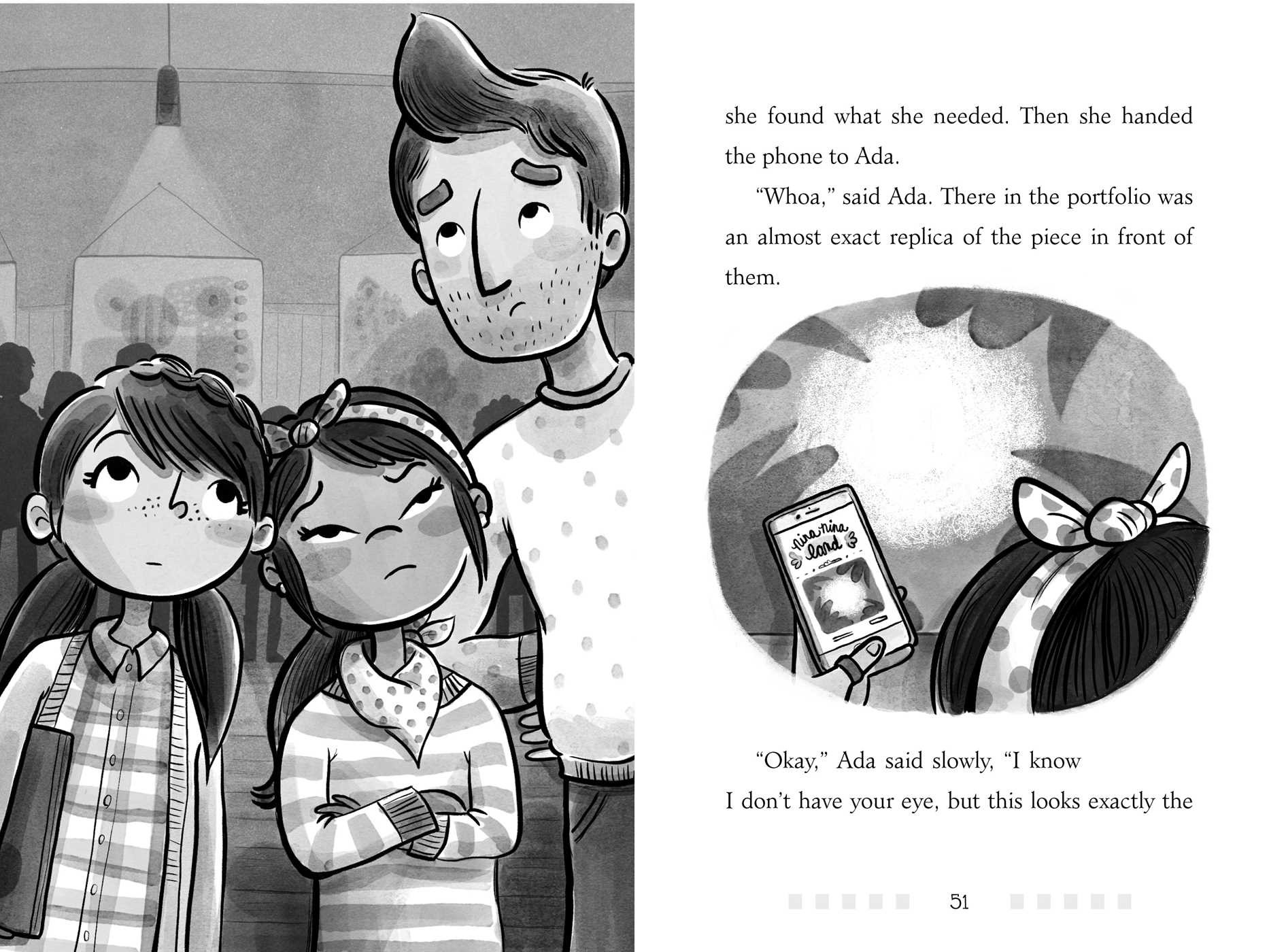 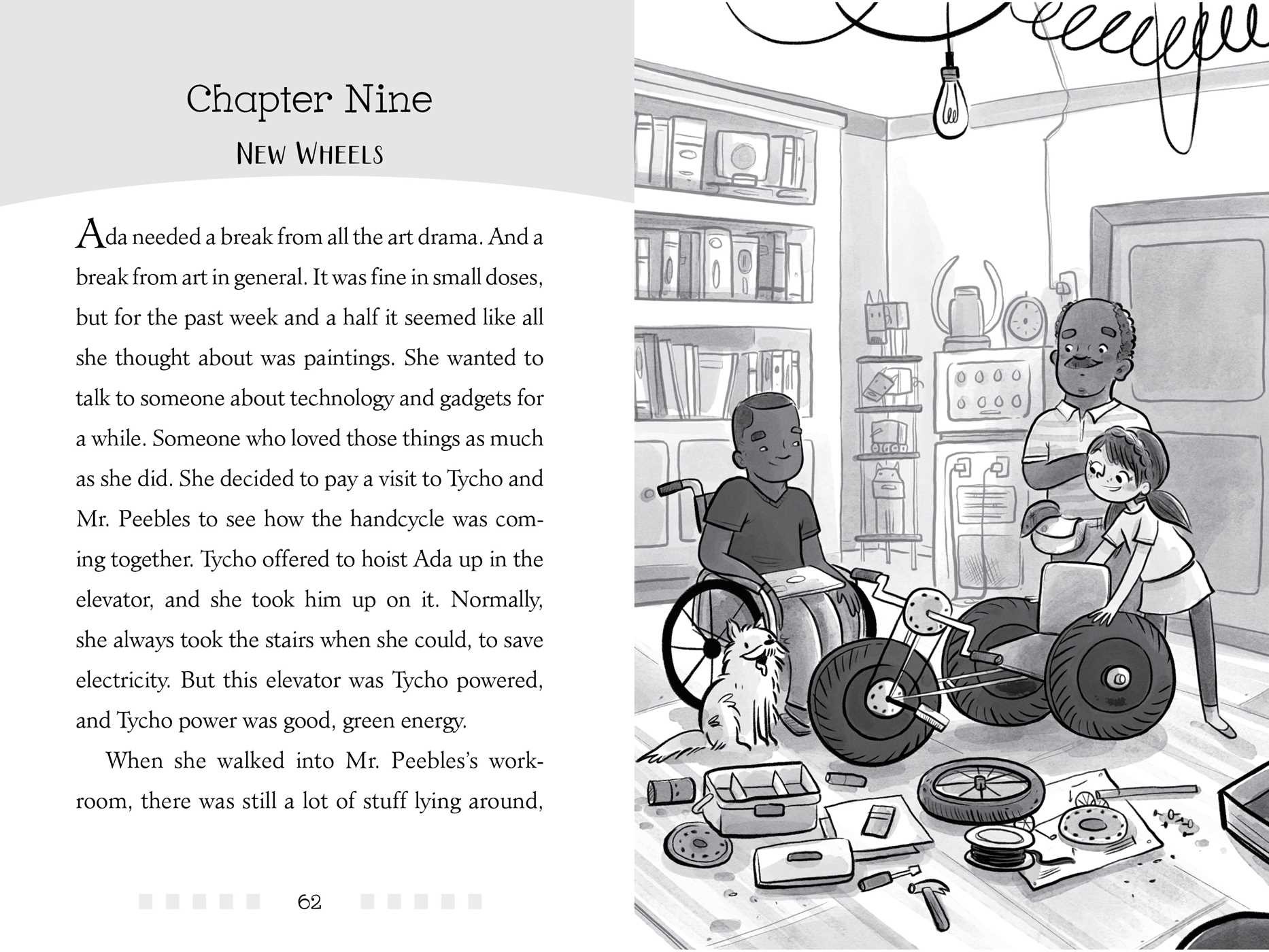 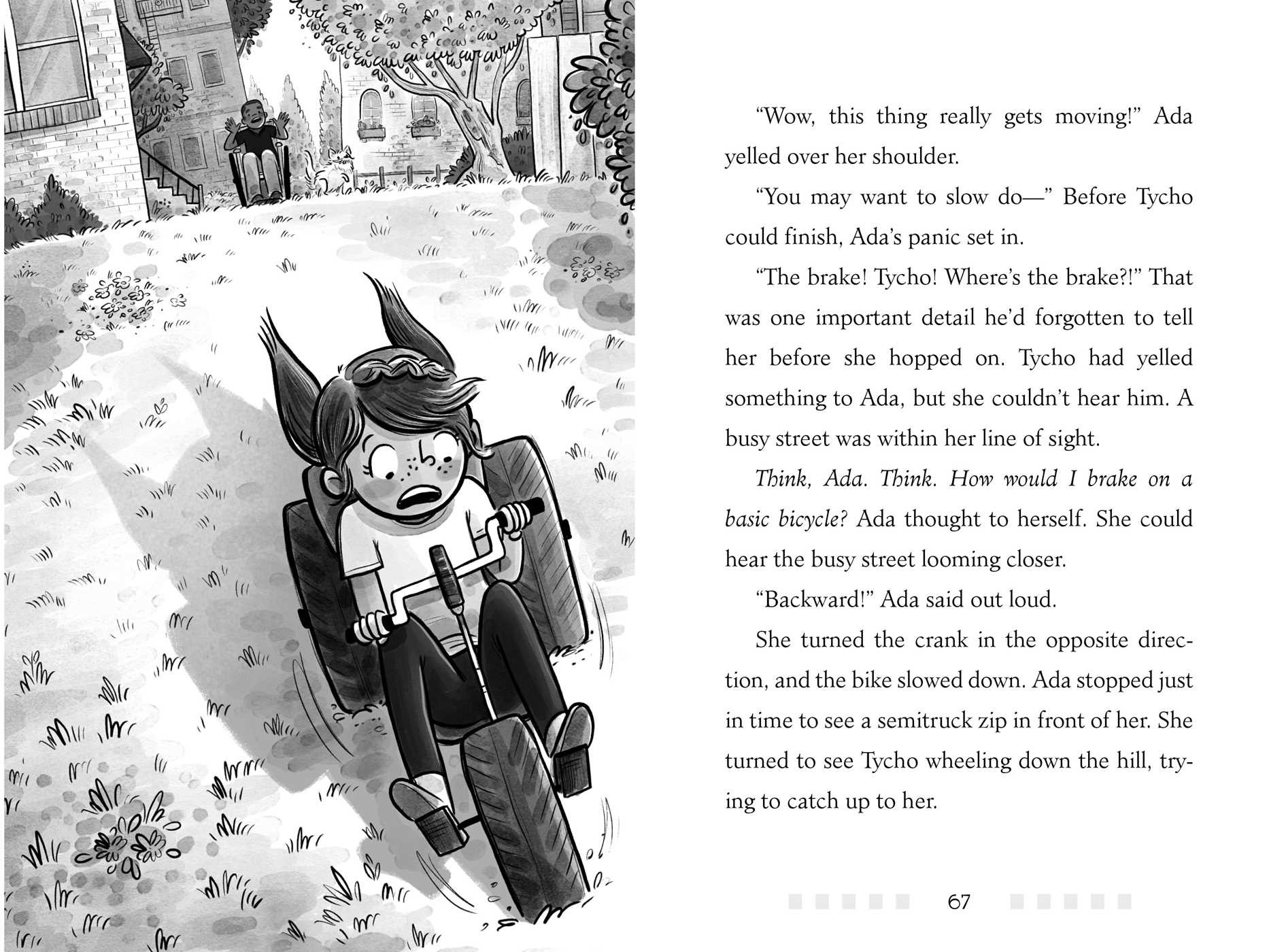 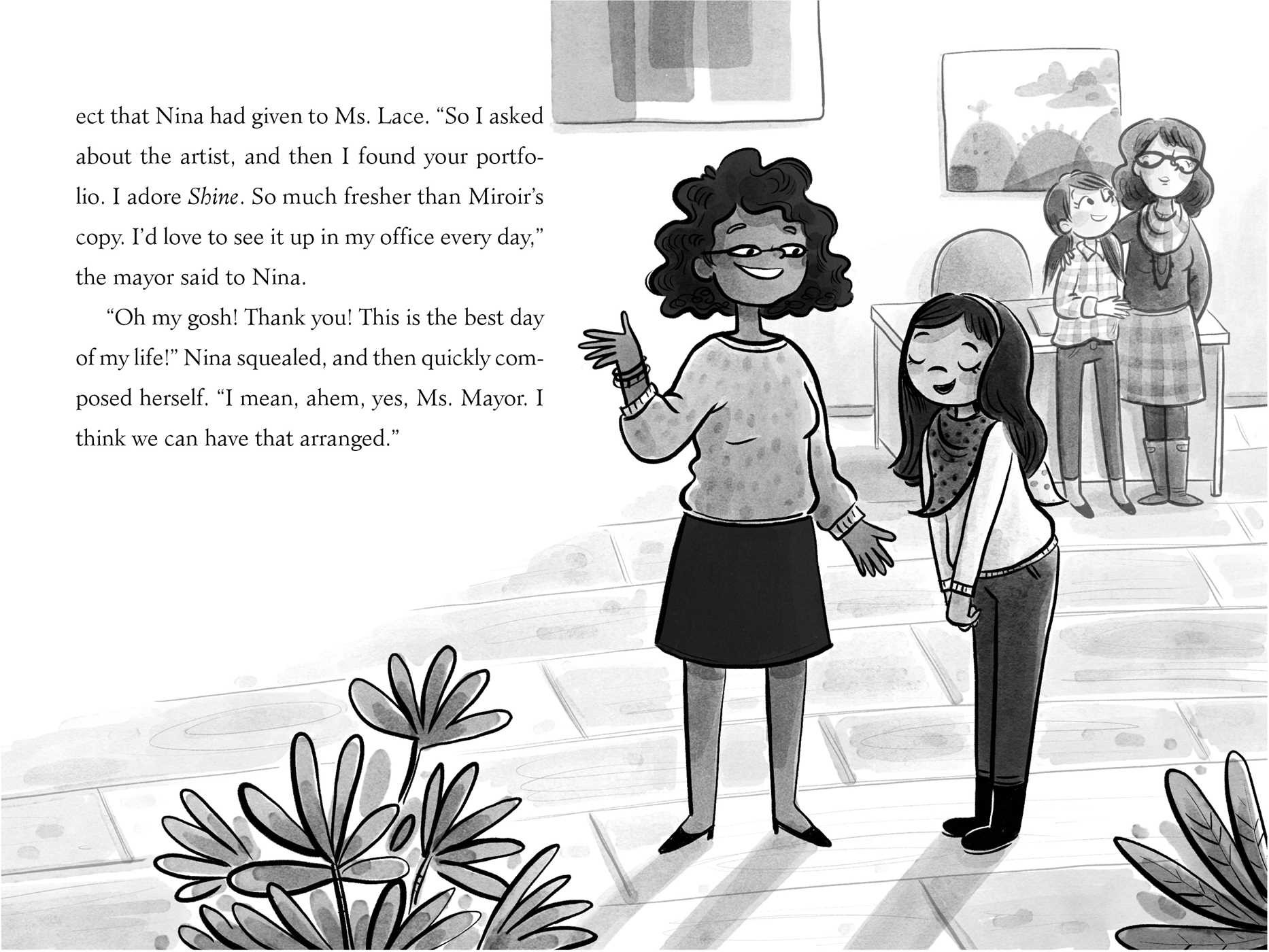 Ada Lace and the Suspicious Artist

From Emily Calandrelli—Emmy-nominated host of Xploration Outer Space, correspondent on Bill Nye Saves the World, and graduate of MIT—comes the fifth novel in a fun illustrated chapter book series about an eight-year-old girl with a knack for science, math, and solving mysteries with technology.

Third grader and inventor extraordinaire Ada Lace is on spring break. But it’s just a little less relaxing than she’d imagined. Nina is beside herself with excitement about meeting her favorite artist and enlists Ada and Mr. Peebles’s coding-whiz nephew to help revamp her online portfolio.

When Nina finally meets Miroir, he snubs her, and her confidence is shaken—but not enough to miss the art show opening. While there, Ada spots a suspiciously familiar painting that may mean Miroir isn’t the original he claims to be.

Will the friends be able to reveal the artist’s true nature, before he fools someone else?

Okay. A tick to the right,” said Nina.

“I moved it to the right before, and you said to move it back,” said Ada.

“Okay! Sorry! Wait a minute. Now I don’t know if that background looks good with these pieces. Maybe we should start over.”

Ada was helping Nina build an online portfolio. It was the best way to introduce her creative energy to the universe, Nina had said. They had been at it all day, and patience was wearing thin. Ada had some of the coding skills, and Nina had a vision in her mind’s eye, but making those two things meet in the middle was harder than they thought. All the numbers, letters, tags, and brackets were starting to blur together. They had already spent an hour trying to add a feature that would allow art lovers to position an image of the piece they were thinking of buying within a picture of their space so they could see what it would look like in context. Ada had learned a few different coding languages from working on George, but Web design was a different ball game. She couldn’t quite manage what Nina wanted. And since Ada couldn’t perfect the art placement feature, Nina seemed unhappy with everything.

That was the other problem. Ada was sick of this Miroir character. Her mom had been preparing for his show all week, and Ada had never seen her so stressed out. Between Ms. Lace and Nina, it seemed like Miroir was the only important person in the world. She looked forward to having her friend and her mom back.

In the middle of it all Elliott burst into Ada’s room with socks on his hands and started rubbing the corner of her desk, her bookshelf, and the head of her bed.

“What are you doing, Elliott?” asked Ada.

Mr. Lace popped his head in. “Elliott. You’re supposed to be cleaning your room.”

Elliott stomped out of Ada’s room.

“I don’t know how much more I can do,” said Ada. “At least right now. This is beyond my skill level.”

“Fine,” said Nina. “I’m going to go home for a bit and see if I can come up with something a little simpler, I guess.”

Ms. Lace was at the gallery late again, so it was just Ada, Elliott, and Mr. Lace for dinner. Elliott insisted on cooking. It was his latest kick. Ada did not have high hopes. If she and Nina hadn’t spent so much time together already, she would have gone to Nina’s for dinner.

The table was set as only Elliott could set it—with a dinosaur in front of each plate. Ada sat in her usual seat.

“No, ADA! That’s not your spot!” said Elliott. He was wearing a big poufy chef’s hat and a gray apron that reached his toes.

“What do you mean? This is always my spot,” said Ada.

“No, you’re the Stegosaurus, obviously. Dad’s the Brachiosaurus.”

That did make sense somehow.

“But Dad’s seat is always at the end,” said Ada.

“Did you make dinner?” Elliott asked.

Ada sat behind the Stegosaurus. Elliott retreated into the kitchen. He came back out grasping a saucepan in two oversized, dirty yellow oven mitts. Just as he was about to reach Ada’s seat, he tripped over one of the apron’s ties and tossed franks and beans over the whole table. Ada escaped almost unscathed, but for a few beans on her sweater. It was the perfect ending to a perfect day.

“OH NO!” yelled Elliott. “My masterpiece!”

Mr. Lace poked his head in and sighed.

“Mom just texted that she was on her way home,” he said. “I’ll tell her to bring a pizza from Donello’s.”

“We’ll try breakfast this weekend, Ell. And maybe we’ll get you a better fitting apron.”

An hour later they were seated around the pizza. Ms. Lace looked frazzled.

“Well, it was challenging. Guy Miroir . . . needs a lot of things. He didn’t like any of the hotels in the city, so we had to put him up in Napa Valley. He’s very . . . particular. You know how these artists can be.”

“Tell me about it,” said Ada, thinking of Nina. 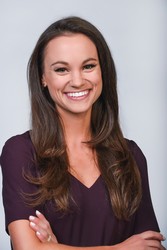 Ada Lace and the Suspicious Artist