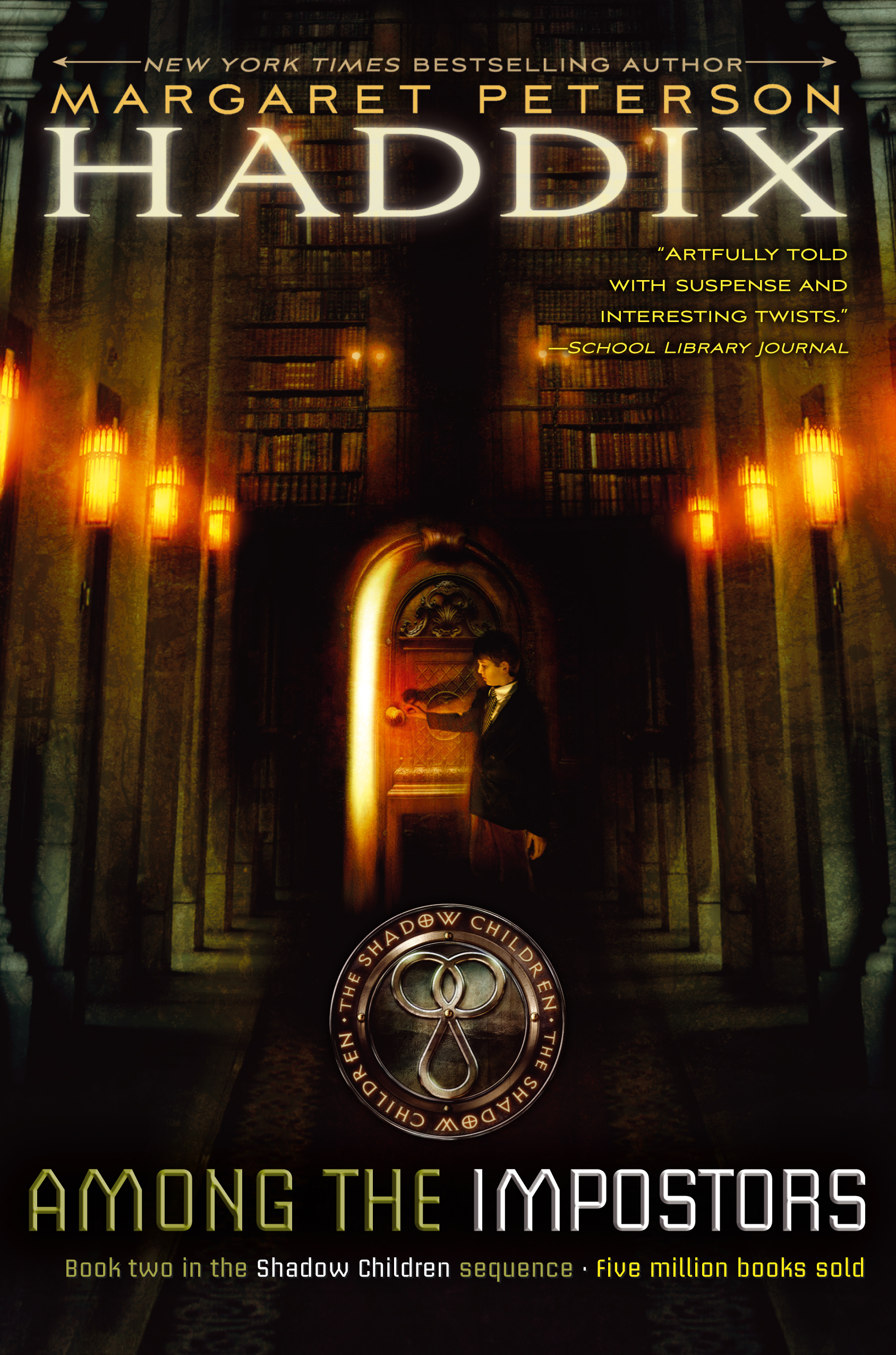 It was awful. All those eyes, all looking at him. It was straight out of Luke's worst nightmares. Panic rooted him to the spot, but every muscle in his body was screaming for him to run, to hide anywhere he could. For twelve years his entire life he'd had to hide. To be seen was death. "Don't!" he wanted to scream. "Don't look at me! Don't report me! Please!" But the muscles that controlled his mouth were as frozen as the rest of him. The tiny part of his mind that wasn't flooded with panic knew that that was good -- now that he had a fake I.D., the last thing he should do was act like a boy who's had to hide. But to act normal, he needed to move, to obey the man at the front and sit down. And he couldn't make his body do that, either. -- from Among the Impostors

Luke Garner is terrified.
Out of hiding for the first time in his life, he knows that any minute one of his new classmates at Hendricks School for Boys could discover his secret: that he's a third child passing as the recently deceased Lee Grant. And in a society where it's illegal for families to have more than two children, being a third child means certain death at the hands of the dreaded Population Police.
His first experience outside the safety of his home is bewildering. There's not a single window anywhere in the school; Luke can't tell his classmates apart (even as they subject him to brutal hazing); and the teachers seem oblivious to it all.
Desperate to fit in, Luke endures the confusion and teasing until he discovers an unlocked door to the outside, and a chance to understand what is really going on. But to take this chance -- to find out the secrets of Hendricks -- Luke will need to put aside his fears and discover a courage that a lifetime in hiding couldn't thwart.
Once again, best-selling author Margaret Peterson Haddix delights her fans with this spine-tingling account of an all-too-possible future. Among the Impostors is a worthy companion to Among the Hidden and a heart-stopping thriller in its own right.

Sometimes he whispered his real name in the dark, in the middle of the night.

He was sure no one could hear. His roommates were all asleep, and even if they weren't, there was no way the sound of his name could travel even the short distance to the bed above or beside him. He was fairly certain there were no bugs on him or in his room. He'd looked. But even if he'd missed seeing a microphone hidden in a mattress button or carved into the headboard, how could a microphone pick up a whisper he could barely hear himself?

He was safe now. Lying in bed, wide awake while everyone else slept, he reassured himself of that fact constantly. But his heart pounded and his face went clammy with fear every time he rounded his lips for that "u" sound -- instead of the fake smile of the double "e" in Lee, the name he had to force himself to answer to now.

It was better to forget, to never speak his real name again.

But he'd lost everything else. Even just mouthing his name was a comfort. It seemed like his only link now to his past, to his parents, his brothers.

By day, he kept his mouth shut.

He couldn't help it.

That first day, walking up the stairs of the Hendricks School for Boys with Jen's father, Luke had felt his jaw clench tighter and tighter the closer he got to the front door.

"Oh, don't look like that," Mr. Talbot had said, pretending to be jolly. "It's not reform school or anything."

Jen's father stood with his hand on the ornate doorknob, waiting for a reply. But Luke couldn't have said a word if his life depended on it.

Jen's father hesitated, then pulled on the heavy door. They walked down a long hallway. The ceiling was so far away, Luke thought he could have stood his entire family on his shoulders -- one on top of the other, Dad and Mother and Matthew and Mark -- and the highest one still would barely touch. The walls were lined, floor to ceiling, with old paintings of people in costumes Luke had never seen outside of books.

Of course, there was very little he'd ever seen outside of books.

He tried not to stare, because if he really were Lee, surely everything would look familiar and ordinary. But that was hard to remember. They passed a classroom where dozens of boys sat in orderly rows, everyone facing away from the door. Luke gawked for so long that he practically began walking backwards. He'd known there were a lot of people in the world, but he'd never been able to imagine so many all in one place at the same time. Were any of them shadow children with fake identities, like Luke?

Jen's father clapped a hand on his shoulder, turning him around.

"Ah, here's the headmaster's office," Mr. Talbot said heartily. "Just what we were looking for."

Luke nodded, still mute, and followed him through a tall doorway.

A woman sitting behind a mammoth wood desk turned their way. She took one look at Luke and asked, "New boy?"

"Lee Grant," Jen's father said. "I spoke with the master about him last night."

"It's the middle of the semester, you know," she said warningly. "Unless he's very well prepared, he shan't catch up, and might have to repeat -- "

"That won't be a problem," Mr. Talbot assured her. Luke was glad he didn't have to speak for himself. He knew he wasn't well prepared. He wasn't prepared for anything.

The woman was already reaching for files and papers.

"His parents faxed in his medical information and his insurance standing and his academic records last night," she said. "But someone needs to sign these -- "

Jen's father took the stack of papers as if he autographed other people's documents all the time.

Luke watched Mr. Talbot flip through the papers, scrawling his name here, crossing out a word or a phrase or a whole paragraph there. Luke was sure Jen's father was going too fast to actually read any of it.

And that was when the homesickness hit Luke for the first time. He could just picture his own father peering cautiously at important papers, reading them over and over before he even picked up a pen. Luke could see his father's rheumy eyes squinted in concentration, his brow furrowed with anxiety.

He was always so afraid of being tricked.

Luke had to swallow hard then. He made a gulping noise, and the woman looked at him. Luke couldn't read her expression. Curiosity? Contempt? Indifference?

He didn't think it was sympathy.

Jen's father finished then, handing the papers back to the woman with a flourish.

"I'll call a boy to show you your room," the woman said to Luke.

Luke nodded. The woman leaned over a box on her desk and said, "Mr. Dirk, could you send Rolly Sturgeon to the office?"

Luke heard a roar along with the man's reply, "Yes, Ms. Hawkins," as if all the boys in the school were laughing and cheering and hissing at once. Luke felt his legs go weak with fear. When this Rolly Sturgeon showed up, Luke wasn't sure he'd be able to walk.

He stuck out his hand and after a moment Luke realized he was supposed to shake it. But he'd never shaken hands with anyone before, so he put out the wrong hand first. Jen's father frowned, moving his head violently side to side, and glaring pointedly at the woman behind the desk. Fortunately, she wasn't watching. Luke recovered. He clumsily touched his hand to Jen's father's.

"Good luck," Jen's father said, bringing his other hand up to Luke's, too.

Only when Mr. Talbot had pulled both hands away did Luke realize he'd placed a tiny scrap of paper between Luke's fingers. Luke held it there until the woman turned her back. Then he slid it into his pocket.

"Keep those grades up," he said. "And no running away this time, you hear?"

Luke gulped again, and nodded. And then Jen's father left without a backward glance.

A Guide for Reading Groups

Sometimes in this world it's hard to know who is telling the truth, who isn't, and what can be done about all the things that are wrong. The government claims that there isn't enough food for everyone in the world, and so they have made it illegal for any family to have more than two children. Yet hundreds of these illegal shadow children exist, and they want desperately to find a place for themselves in society. But these are children who have been forced to hide their entire lives, and who are only allowed to venture out with fake IDs in their hands and fear in their hearts. How can they sort through the conflicting information about shadow children and find out where they belong? And will they be able to find the courage to defy the government and stop hiding?

"Haddix successfully builds the tension and excitement in this quick-moving, easy-to-read sequel to Among the Hidden."

"In the end, Haddix leaves readers longing for more about Luke Garner."

"Luke and his experiences are believable in this appealing, simple futuristic story. Kids who've read the first book will welcome this one."