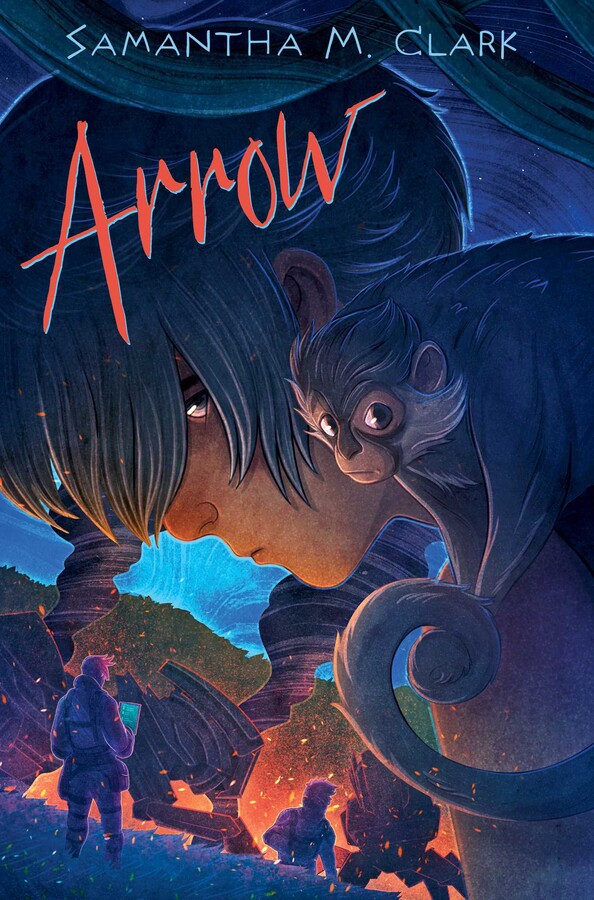 From the author of The Boy, the Boat, and the Beast comes a “richly imagined fable” (Susan Fletcher, author of Journey of the Pale Bear, a Golden Kite Honor Book) about a boy who’s grown up as the only human in an enchanted rainforest and what happens when people from the outside world discover his home.

For the first twelve years of Arrow’s life, he grew up as the only human in a lush, magical rainforest that’s closed off from the rest of the world. He was raised by the Guardian Tree, the protector of the forest, which uses the earth’s magic to keep it hidden from those who have sought to exploit and kill it. But now the magic veil is deteriorating, the forest is dying, and Arrow may be the only one who can save it.

Arrow never saw another human until one day, a man in a small airplane crash-lands in the forest. Then, a group of children finds their way in, escaping from their brutal, arid world where the rich live in luxurious, walled-off cities and the poor struggle for survival.

The Guardian Tree urges Arrow to convince the trespassers to leave by any means necessary. Arrow is curious about these newcomers, but their arrival sets off a chain of events that leave him with a devastating choice: be accepted by his own kind or fight to save the forest that is his home.

1
MY END BEGAN THE DAY THE SKY TURNED RED.

WE SHOOK. WE TREMBLED. WE STARTED TO BLEED. BUT THIS WOULD BE ONLY THE START, A SMALL TASTE OF THE BATTLE TO COME. OUR QUIET WORLD HAD BEEN CHANGING, AND I COULD ONLY HOPE SOME WOULD SURVIVE.

Arrow was high above the ground when the boom sounded. Stretched out along a branch, he peered at the gecko perched on his wrist. He had been watching, narrow-eyed, as the gecko’s neck billowed then shrunk, billowed, then shrunk, its mouth wide open, waiting for its next meal to fly by. Arrow had been about to shift—a small, almost imperceptible movement—to coax the gecko’s webbed feet to scurry across his skin, over his shoulders, and down his other arm to his waiting hand. He had played the game many times before; he was good at it.

But the gecko wouldn’t be captured that day.

It silenced the forest. Focused attention. Arrow snapped taut, and the gecko jumped away, but Arrow didn’t follow. His eyes were on the glimmer of blue between the treetops and the line of black fracturing its calm.

The forest shook. Arrow lost his footing. His hand caught a branch, his elbow hooked a tree limb. His breath shallowed.

“Sit down,” I told him, as he leaned forward, peering into the brush.

“But what can make those noises?”

His weight shifted; his feet scrambled to the next branch down.

Lives had already flickered out. The losses had been etched in the soil. It had been quick for some; others had passed on what little they knew before their voices had disappeared.

Another boom, and great clouds of gray and red belched into the sky.

Arrow faltered. The clamor of his heart hammered through the soles of his feet.

“Stay here,” I said, sensing his itch to follow the roar, to find the source.

He listened for the intrusion, craning his neck to pluck more information out of the air. Then he lifted his heels. “I won’t be long.”

But his soles pounded across the earth, up the tree trunk, through the branches, along the lianas. Down. Up. Down. Cautious but driven forward. Until he stopped short.

The vision had already been laid out for me. South, near the mouth of the river, where the water plunged over the cliff, a flaming metal bird had crashed, punching a crater into the ground. Red-and-orange tongues twisted into the sky, trying to escape cloaks of black. The broken bird crackled and spit as the fire devoured it.

I wished he would return. That was not a place for a boy of only twelve rings. And I knew he wasn’t alone.

Another thud had followed the first—a smaller one, a man. He had landed hard on the scorched ground farther back from the river’s edge, a windcatcher dragging behind him. He wasn’t far from the blaze, though, and hadn’t stood since his body had crumpled onto the dirt. Most likely he’d been unconscious as he had descended. He should’ve been thankful he hadn’t gone over the edge, down with the water, onto the froth at the rocky base of the mountain. Instead he lay still, his slowed heartbeat pulsating into the soil.

The man’s arm moved, shoulder twitching against the ground.

Arrow’s toes dug beneath the forest’s carpet of leaves as he leaned forward for a closer look. He took in the burning bird, the sleeping man, and the ribbon of thick, rainbow-tinged liquid between them. Arrow had never seen the colorful liquid before, but he could see how the flames sought it out, lapped it up, hungered for its taste.

A gust blew in, and the giant red windcatcher lying near the bird bloated with air. Its bottom edge grazed the ground, soaking up the liquid, as the wind raced across the cliff. Flames picked up the scent, lunged, and caught the end of the windcatcher. The fire bit at the red fabric, swallowed inch after inch, spit out black ash as the windcatcher drifted closer to the man.

Arrow’s feet lifted, and I wanted to plead for him to stay, but I knew my words would be lost to him this far away.

Thud, thud, thud, and Arrow was next to the man. His hand grabbed the back of the man’s shirt; his arm hooked under the man’s armpit. He pulled, pulled, heels digging into the dirt. The man was heavy, his body a sloth. A tug, and the man moved—but the flaming windcatcher followed. It was still tethered to his back.

Arrow’s pulse quickened. He tugged on the ropes, and one came loose. A metal claw at its end had opened and set it free. Arrow found a lever that opened the other claw, then threw the ropes to the side. He heaved harder, all his weight pushing down on the earth until he gained traction. Finally he pulled the man away. The windcatcher writhed and twisted in the air as the flames devoured it, until all that was left was black dust.

With the man out of danger, Arrow laid him on the ground. The man stirred, a groan rising up from his throat.

Arrow raced back, back, back to the safety of the trees as I whispered a thank-you.

The man started to wake, pushing himself up. But his shoulders slumped, and he collapsed again.

I wished for Arrow to leave, to come home, but he waited, heart drumming onto the silt. He peered from around a trunk, watching the man, willing him to stand, to walk away from the waves of heat radiating off the still-burning metal bird.

Until the fire jumped.

Arrow saw flames inch closer across the thin line of rainbow-tinged liquid. Saw them reach for the man. Saw them leap.

He called out, but it was too late.

The man’s scream echoed into the blackened clouds above. He jumped up, swatting at the flames tearing at his boot. His eyes caught the river and he ran for the bank, swung his legs into the fast-rushing water. The fire was doused in the fray, but the man had to pull himself out of the river before he was swept away.

Cradling his burnt foot, the man squinted at his metal bird as the bones sighed into the crater. His eyes narrowed at the ropes unclasped from his back and lying scorched on the ground.

He glanced around quickly, and Arrow slunk out of sight, finally retreating back, back, back to me.

Night had begun to descend by the time he got home. Heart wild, Arrow breathed deeply as he climbed to his nest of palm leaves tied between my branches. “He’s like me,” he whispered. “But bigger. Much bigger.”

“A man,” Arrow repeated. “Where did he come from?”

“I felt his machine from the north,” I said. “The outside world.”

“What’s he doing here?” Arrow’s breath was quick as he settled on the branches but not from his climb.

“You should sleep, Arrow.”

“Sleep? How can I sleep now?” His voice was exasperated. “There’s another one like me in the forest.”

Cradling his chin in his right hand and the tip of his arrow arm, where it ended at his wrist, he gazed at the star starting to blink above and smiled. 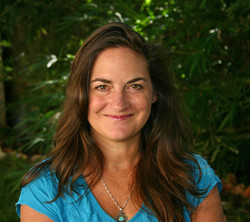 Samantha M. Clark loves stories about ordinary people in extraordinary circumstances because if four ordinary brothers and sisters can find a magical world at the back of a wardrobe, why can’t she? Until she finds her own real-life Narnia, she writes about other ordinary children and teens who’ve stumbled into a wardrobe of their own. She grew up in different countries around the world and now lives with her husband and two funny dogs in Austin, Texas. Samantha is the regional advisor for the Austin chapter of the Society of Children’s Book Writers & Illustrators and she explores wardrobes every chance she gets. Her debut novel, The Boy, the Boat, and the Beast, was lauded as “an unforgettable, life-affirming tale” by Booklist. She is also the author of Arrow. Visit her online at SamanthaMClark.com.

"Narrated by an ancient tree who counts years as rings and feels the emotions of forest creatures in her roots, Arrow is a richly-imagined fable about the need to connect with people of divergent tribes…and thereby heal a wounded planet.  Clark blends fantasy and science into a lush and timely tapestry that enlightens and enchants."

Guide to Using Environmental Fiction and Nonfiction in the Classroom (pdf)