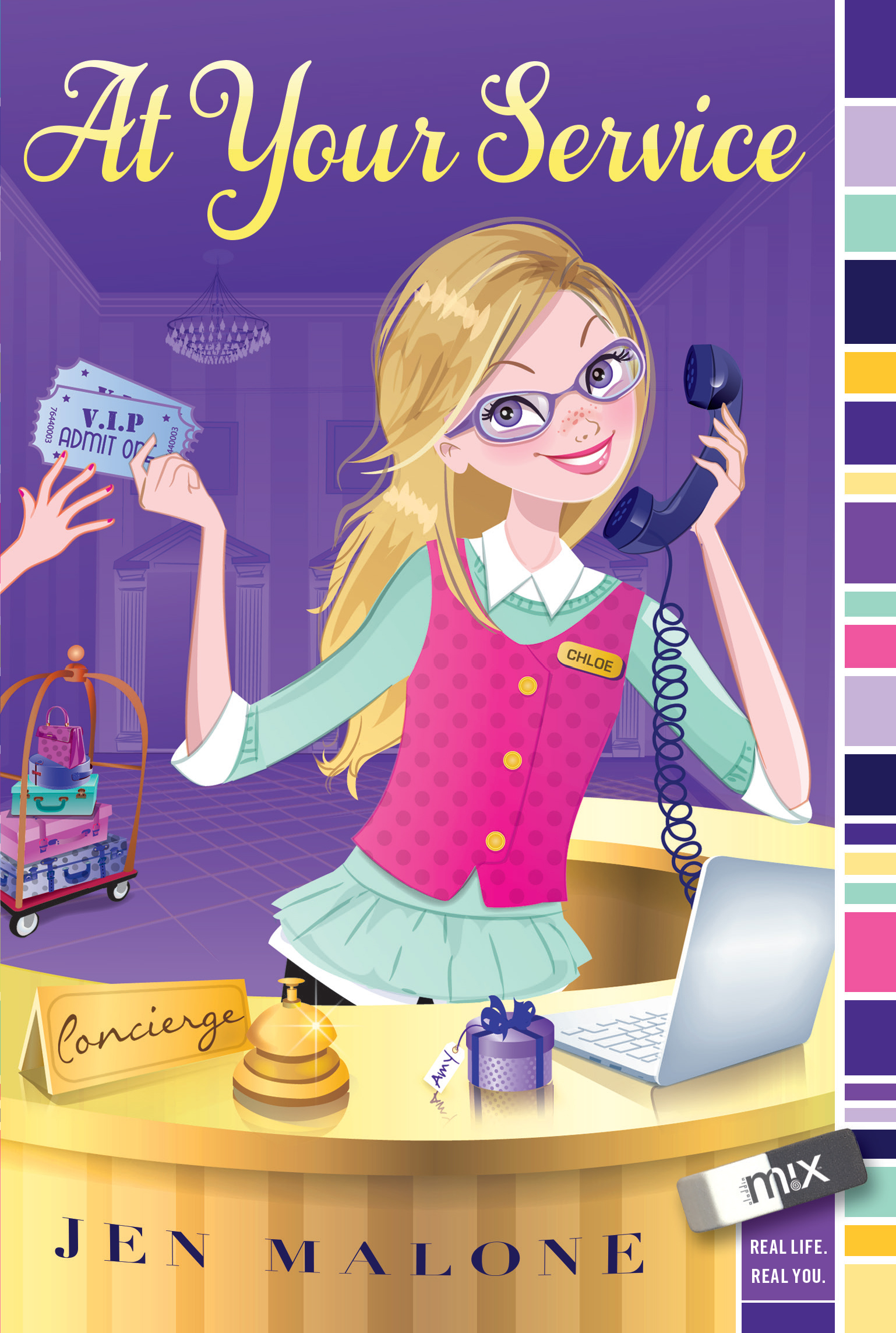 Chloe loves working as a junior concierge at an exclusive NYC hotel—but when three royal kids come to stay, her hospitality is put to the ultimate test!

Chloe Turner has pretty much the BEST life. She gets to live in the super fancy Hotel St. Michele. New York City is her hometown. And her dad, Mitchell Turner, concierge extraordinaire, is teaching her all the secrets of the business so she can follow in his footsteps. After helping him out with a particularly difficult kid client, Chloe is appointed the official junior concierge, tending to the hotel’s smallest, though sometimes most demanding, guests.

Her new position comes with tons of perks like cupcake parties, backstage passes to concerts, and even private fittings with the hippest clothing designers. But Chloe hasn’t faced her toughest challenge yet. When three young royals (including a real-life PRINCE!) come to stay, Chloe’s determined to prove once and for all just how good she is at her job. Except the trip is a total disaster—especially when the youngest royal disappears. Now it’s up to Chloe to save the day. Can she find the missing princess before it becomes international news?

At Your Service Chapter One
Oh. Holy. Yikes.

Pygmy elephants sound like they’d be adorable, but when they look ready to charge at you? Mmm . . . not so much.

I crouch low in the tall African grasses, the stalks tickling my bare calves below my skirt, and try to hold as still as possible. News flash: not super easy in heels. Even the really short kind, which is all Dad lets me wear. The narrow beam from my flashlight wobbles, and I have to clamp one hand on top of the other to steady it.

I point the light near the face of the motionless tribesman, not particularly wanting to linger on the elaborately painted designs covering his bare chest or on the spear in his hand, poised to release. Let’s not discuss the skimpiness of his clothing (if you can even call a loincloth “clothing”). Eww.

“Aaaaaand . . . got it. Goodness, this is frightfully awkward. I might need a hand with this.” Professor Mosley, the museum curator, gestures with a chin jerk for me to move beside him in the glassed-in exhibit as he struggles with the decorated headdress of an eighteenth-century African Irigwe dodo dancer.

“I have to admit, this is not precisely what I had in mind for my Friday night,” he says with a sigh, in a British accent that might sound snooty if you didn’t know he’s actually really nice.

I stretch my arms up to help him lower the ceremonial costume from the head of the mannequin tribesman, careful not to disturb any of the banana fronds along its edges.

“Kinda heard that one before, Professor . . . ,” I grunt as the weight of the headdress hits me. How on earth did people wear these things?

We tiptoe around the grass hut toward the exit at the back of the glass case, which is:

A. Again, not so easy in heels. Even mini ones.

B. Even less easy carrying something that probably weighs more than the remarkably realistic-looking elephant we have to maneuver past.

C. No C, actually. But lists with only A and B look sort of lonely.

A night guard nods to us as we step out. He hangs an EXHIBIT CLOSED sign on the velvet ropes he’d set up along the front of the display.

Professor Mosley tells him, “No need for concern, we’ll have the display sorted out before opening time tomorrow.”

“And aren’t I cursing that fact tonight,” Professor Mosley mutters, then turns to me. “Only for your father, young lady. Truly, I cannot imagine anyone else I would open the museum for after closing time to sneak out an African headdress. And just so that one of your hotel guests can have an impromptu wedding ceremony performed in traditional garb.”

It’s true, people will do practically anything for my dad. It probably also doesn’t hurt that Professor Mosley knows Dad will be sure to send an insane number of guests to visit the American Museum of Natural History’s new exhibit this week. Concierges rely on favors, but we always try to return them quickly.

I say “we,” but really it’s Dad who’s the concierge. For now, at least. Someday my name will be whispered in the same worshiping tones he commands from everyone in the hotel industry. At least I hope.

If you’ve ever stayed in a fancy hotel, you’ve probably seen a concierge, tucked away at a podium or in an alcove to the side of the check-in desk. If your parents needed theater tickets or a dinner reservation or something just a tiny bit weirder, like an incubator to keep the peacock eggs they’re traveling with warm, they probably went straight to the concierge. And if he (or she) was anything like my dad, he (or she!) got it for them. Even the incubator. Dad likes to say there’s no such thing as an outrageous request.

I don’t know about that, since I’ve heard guests ask for some pretty crazy things (hello, if you need to sleep in a hyperbaric chamber, you should probably just stay home), but I do know Dad never disappoints.

“At your service,” he says with a smile to every guest who approaches him at the St. Michèle, the very best (in my honest opinion) hotel in New York City.

Basically, if my dad can’t get it for you, it doesn’t exist.

At the moment I’m sort of wishing this headdress didn’t exist, because it’s really awkward to carry. It’s taking all my effort to keep it from scraping the floor and that’s with Professor Mosley holding up his end and most of the middle part.

We maneuver our borrowed treasure down the deserted, dimly lit hallways of the museum, our footsteps echoing. I’m glad when Professor Mosley starts making conversation. It helps take my mind off the fact that if I drop this, I’ve pretty much destroyed a priceless and irreplaceable museum artifact, along with any hopes of following in Dad’s footsteps.

“Well, regardless of the circumstances, it’s always delightful to see you, Chloe. Not only are you the spitting image of your father, but you’re just like him when it comes to handling the impossible.”

Okay, so there are a whole bunch of things wrong with what he just said. First, even in his baby pictures, my dad never had the little cluster of freckles that cover the top of my nose and cheeks (which I either love or hate, mostly depending on the day), and second, Dad’s hair is dark brown, like an éclair from La Maison du Chocolat on Madison Avenue, while mine is more the blondish color of the wet sand at Rockaway Beach. Plus PLUS, mine’s wavy, not straight, and I wear glasses.

But the part about my skills being like his makes me squirm, half out of embarrassment and half out of pride. I know they’re not. Yet. But they will be if I have anything to say in the matter. I can’t think of any job that is more challenging but also totally rewarding. Making people happy—even if it’s only for the length of their vacation—is like having a superpower.

Professor Mosley lets loose with a giant sigh as we shuffle along. “Truly, I am going to need a stiff brandy by the time this night is over. Tell me, do they let eleven-year-olds into bars these days?”

“I’m almost thirteen, but no, sir. It’s strictly Shirley Temples for me.”

He grunts, shifting the weight of the headdress slightly. I have to do a quick sashay-step to avoid tripping. I really don’t envy the bride who’s going to have this thing on her head. Now I get why the ceremony is seated.

Professor Mosley catches his breath for a second, then asks, “So, this wedding . . . Am I to understand this guest already had a million-dollar church ceremony a few days ago? Was that one not elaborate enough?”

“Apparently the bride’s mother decided at the last minute she couldn’t give her blessing to the marriage until a traditional tribal wedding is performed. Since the tribe is in Nigeria and we’re in Manhattan, we’re improvising. All we want at this point is for the bride to stop crying and start enjoying her honeymoon. The other guests are starting to complain about the sobbing noises.”

“And your dear father was able to find a Nigerian fellow in New York who knows the ritual? Amazing!”

I can see the door—and salvation—steps away. Yahoo. My fingers cramp a little, and I try to wiggle them without losing my grip.

“Dad’s still back at the hotel working out the details, but he’s found someone.”

Pushing the emergency-exit door open with his back, Professor Mosley guides us down a ramp and over to a limousine parked behind the loading dock. My driver, Bill (well, really the Hotel St. Michèle’s driver, on loan for official hotel business), is waiting with the car doors open. He rushes over to take the weight off my hands. Gotta love Bill. Together the two men slide the headdress gingerly across the backseat of the limo.

When it’s safely in place, I finally let all the air out of my lungs.

Reaching into the front seat for my sequined purse, I pull out a neatly numbered to-do list and a pencil topped with a fluffy yellow pom-pom that perfectly matches my canary-colored sweater set. It’s kind of a thing with me. Every day I pick out the pen that matches my outfit and tuck it into my purse. This is the kind of attention to details that hotel staffers at ultrafancy hotels need to be very good at, so I figure I should get in the habit as soon as possible.

I consult my list. Okay, so all we need now is some face paint to stand in for colored clay, a wooden drum, and a bunch of noise-canceling headphones for the guests in the adjoining rooms. Easy peasy.

I make a million and twelve promises to the professor that I will guard the headdress with my very life, then scoot into the front seat next to Bill.

“Where to, Sunshine?” he asks.

As Bill slides the limousine into a swarm of yellow taxicabs, I unlock my smartphone and begin punching buttons, working off a list of numbers for instrument rental shops on the Upper West Side.

Yup, just another day in the life of a concierge at New York City’s finest hotel (well, technically in the life of the concierge’s daughter, but still . . .). And if things continue to go this awesomely, I’m one step closer to earning my own spot among the legends in the hotel biz. 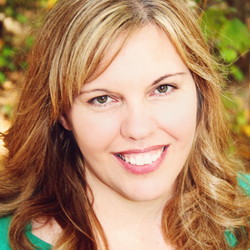 Jen Malone is a former Hollywood publicist who once spent a year traveling the world solo, met her husband on the highway (literally), and went into labor with her identical twins while on a rock star’s tour bus. These days she saves the drama for her books. Jen is also the author of the middle grade novels At Your Service and The Art of the Swap, coauthor of the You’re Invited series, and wrote the YA novels Map to the Stars and Wanderlost. You can visit her online at JenMaloneWrites.com.