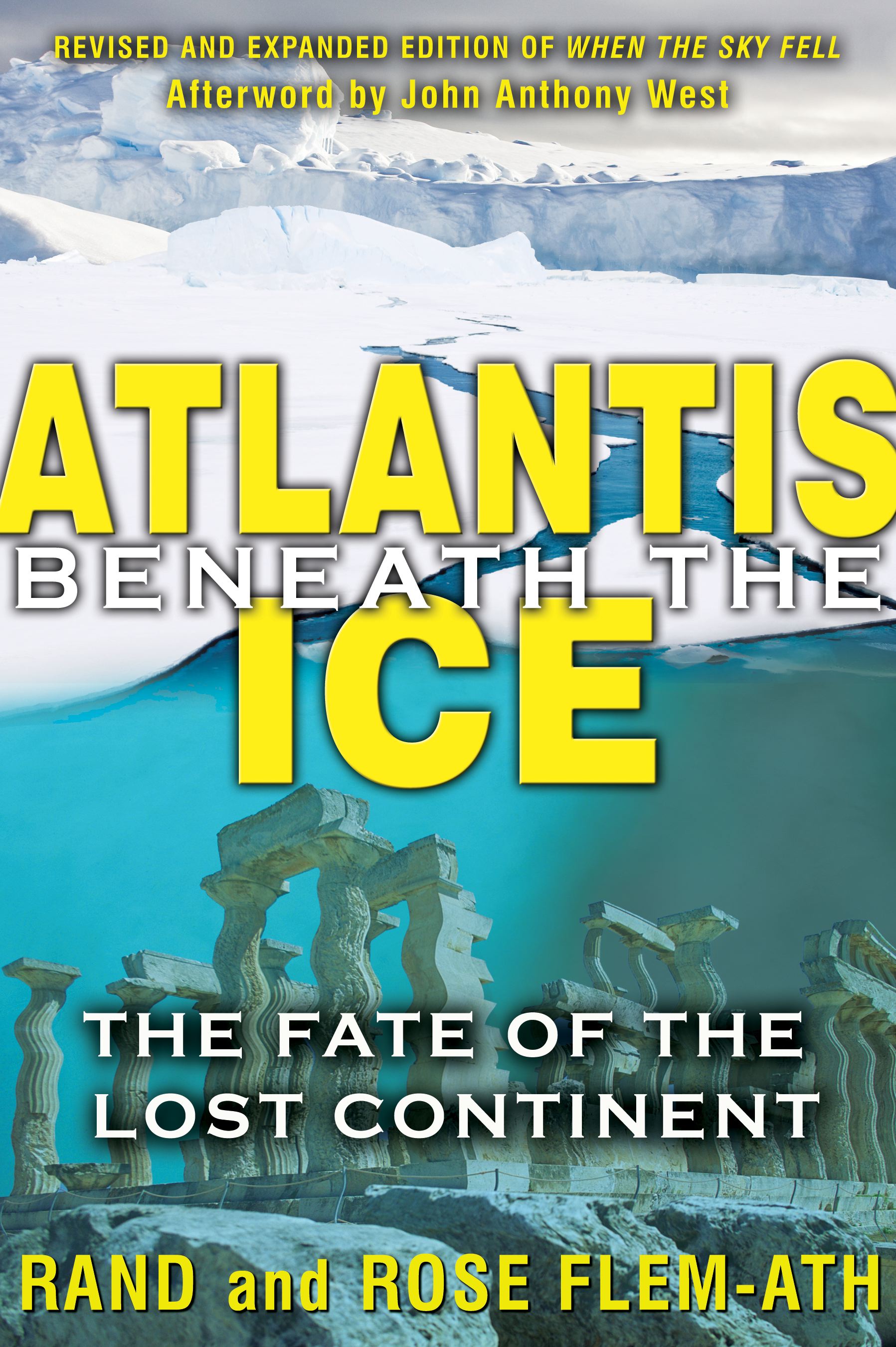 Atlantis beneath the Ice

The Fate of the Lost Continent

Scientific and mythological evidence that Antarctica was once Atlantis

• Reveals how the earth’s crust shifted in 9600 BCE, dragging Atlantis into the polar zone beneath miles of Antarctic ice

• Examines ancient yet highly accurate maps, including the Piri Reis map of 1513, which reveals a pre-glacial Antarctica

In this completely revised and expanded edition of When the Sky Fell, Rand and Rose Flem-Ath show that 12,000 years ago vast areas of Antarctica were free from ice and home to the kingdom of Atlantis, a proposition that also elegantly solves the mysteries of ice ages and mass extinctions, the simultaneous worldwide rise of agriculture, and the source of devastating prehistoric climate change. Expanding upon Charles Hapgood’s theory of earth crust displacement, which was championed by Albert Einstein, they examine ancient yet highly accurate world maps, including the Piri Reis map of 1513, and show how the earth’s crust shifted in 9600 BCE, dragging Atlantis into the polar zone where it now lies beneath miles of Antarctic ice. From the Cherokee, Haida, and Okanagan of North America to the earliest records of Egypt, Iran, Mexico, and Japan, they reveal that ancient myths of floods, lost island paradises, and visits from advanced godlike peoples from all corners of the globe all point to the same worldwide catastrophe that resulted in Atlantis’s demise. The authors explain how the remaining Atlanteans, amid massive earthquakes and epic floods, evacuated and spread throughout the world, resulting in the birth of the first known civilizations.

Including rare material from the archives of Charles Hapgood, Albert Einstein, and Dwight D. Eisenhower, the Flem-Aths explain how an earth crust displacement could happen again in the future, perhaps in correspondence with high solar activity. With new scientific, genetic, and linguistic evidence in support of Antarctica as the location of long-lost Atlantis, this updated edition convincingly shows that Atlantis was not swallowed by the sea but was entombed beneath miles of polar ice.

Introduction to the New Edition

It is good to see the word Atlantis prominently strutting its stuff in the title of this new and expanded edition of When the Sky Fell. This tarnished word has been maligned, misinterpreted, and tossed back and forth between timid suitors unsure whether to embrace or disdain it.

The theory of earth crust displacement, which proposes that the earth’s outer shell catastrophically shifts over the planet’s subterranean layers, forms the scaffolding of our quest for the lost civilization of Atlantis. Professor Charles Hapgood developed the theory, and in this new edition we detail our fresh research gleaned from three weeks of study at Hapgood’s long-neglected Yale archives. We delve in to his correspondence with President Dwight D. Eisenhower and visit the president’s archives in Abilene, Kansas. These forgotten documents reveal how Christopher Columbus may have possessed a world map drawn by the survivors of Atlantis. Fragments of the map incorporate astronomical clues pointing to the date it was originally drafted, 3800 BCE, a date that coincides with the dawn of Egyptian civilization.

We learn how Einstein urged that Hapgood be awarded a Guggenheim Foundation Grant because his earth crust displacement theory was “fascinating and important.”

A rare, debilitating genetic disease common to the Haida of British Columbia, on Canada’s western coast, is shown also to be suffered by the pharaohs of ancient Egypt, suggesting that the two vastly separated peoples may have had a common ancestor.

We follow the career of the seventeenth-century Jesuit priest Athanasius Kircher as he becomes the Einstein of his century and marvel at the lost Egyptian map of Atlantis that Kircher rediscovered.

Evidence is uncovered that demonstrates that intricate, advanced water-management systems were developed in the highlands of New Guinea immediately after the fall of Atlantis.

We reveal the existence of a shadowy cave where DNA samples taken from a young man’s remains point to the astonishing fact that he had traveled thousands of miles from the southern tip of South America to his death in Alaska. Nobody knows how or why.

And we celebrate a new generation of Latin American archaeologists who have come to the radical conclusion that South America was populated before North America.

Science is exploding, and the blast is providing more and more energy to drive the theory of earth crust displacement and the search for the lost continent.

A lot has changed since 1981, when we quit our jobs in Canada and packed up a trunk with all our worldly belongings, enough money to survive for three months, and presented ourselves at that mecca for librarians everywhere, the Reading Room of London’s British Museum. Under its robin-egg-blue dome, shutting out the great city’s roar, we devoured book after book. Some of them, like Charles Lyell’s 1830 Principles of Geology or James Hutton’s 1795 Theory of the Earth with Proofs and Illustrations, could only be accessed from the Rare Book Room. Books that took months to receive back home were presented to us in the Reading Room within hours. Five years later, our London adventure resulted in plenty of raw material for our own contributions to the library.

It’s no longer necessary for any writer to go to such lengths to find the intellectual spring of his or her subject matter. The Internet delivers any text we want to our eager eyes within seconds. Has to be a good thing, right? You’d think so. And for most of us it probably is. But don’t hold your breath thinking it will result in any paradigm-busting breakthroughs in the places where ideas are supposed to rule.

The Internet offers a potential gold mine of knowledge, bringing together more material than any individual could possibly explore in a lifetime. But it’s not well known that the search engines used to access this wealth of information direct researchers primarily to articles that espouse the conventional streams of current thought. Good enough, perhaps, to access the latest trend in scientific pronouncements, but far less effective for challenging hallowed assumptions and developing alternative theories. In fact, contrary to expectations, between 1945 and 2005, as millions of scholarly articles went online, researchers increasingly began to cite fewer and fewer articles. Rather than expanding the parameters within their fields of research, online access has unexpectedly resulted in a troubling narrowing of science and scholarship.

In contrast with how the Internet has narrowed the world of some researchers, it has also opened the door for Atlantis to shine again. Brushed up and polished to be presented to a new audience--whether skeptical or keen, inspired artist or naysayer, geographer or psychologist--Atlantis can step out and be judged in the light of a new age of information.

The remnants of the lost continent surface in intriguing places. In this book we delve in to the records of people from around the globe who fled the rising ocean and scrambled to safety in the mountains where, in a bid to survive, they began the sophisticated task of domesticating native plants. This sudden, global rise of the finely tuned art and science of agriculture in the highlands starts mysteriously at the precise time that Atlantis fell, suggesting a forgotten past unexplored by traditional archaeology.

The chronicle of Atlantis is properly called a legend, not a myth. A legend tells of events that took place in the real world at a specific time involving human beings. A myth, in contrast, is enacted on a supernatural stage where events are controlled by all-powerful gods and goddesses. Plato, the source of the Atlantis legend, tells us that the island continent perished at a specific time, some 11,600 years ago. He says that the vast island was located in a “real ocean” and was destroyed by earthquakes and floods of extraordinary violence. Gods don’t determine the unfolding events in this legend. Instead, it is the palpable forces of nature that prevail against Atlantis and end its rule. Atlantis is a legendary, but real, place that can be found.
Rand Flem-Ath

Rand Flem-Ath is a librarian and coauthor of The Atlantis Blueprint. He has appeared on the History Channel, the Discovery Channel, NBC, CBC, and the BBC as well as on numerous radio shows. He lives on Vancouver Island in British Columbia.

Rose Flem-Ath is a novelist, non-fiction writer, and two-time winner of the prestigious Canada Arts Council Grant for fiction. She lives on Vancouver Island in British Columbia.

“An excellent book that is not only beautifully researched but also extremely entertaining to read. The Flem-Aths’ theory on Atlantis will go down in the annals of this subject as one of the most convincing and imaginative. Well done for the first-class tour de force.”

– Robert Bauval, author of Black Genesis and The Orion Mystery

“Rand and Rose Flem–Ath’s Atlantis Beneath the Ice is a fascinating and compelling read. Piling tantalising amounts of ancient history, along with modern scientific theories, into the mix with the ancient idea of Atlantis, is sure to draw in the new reader–and the Atlantis know–it–alls will come away with a few surprises. The melding of myth, science and the endearing legend of Atlantis, proves to be one tasty brew for the mind and the soul.”

Atlantis beneath the Ice

The Fate of the Lost Continent