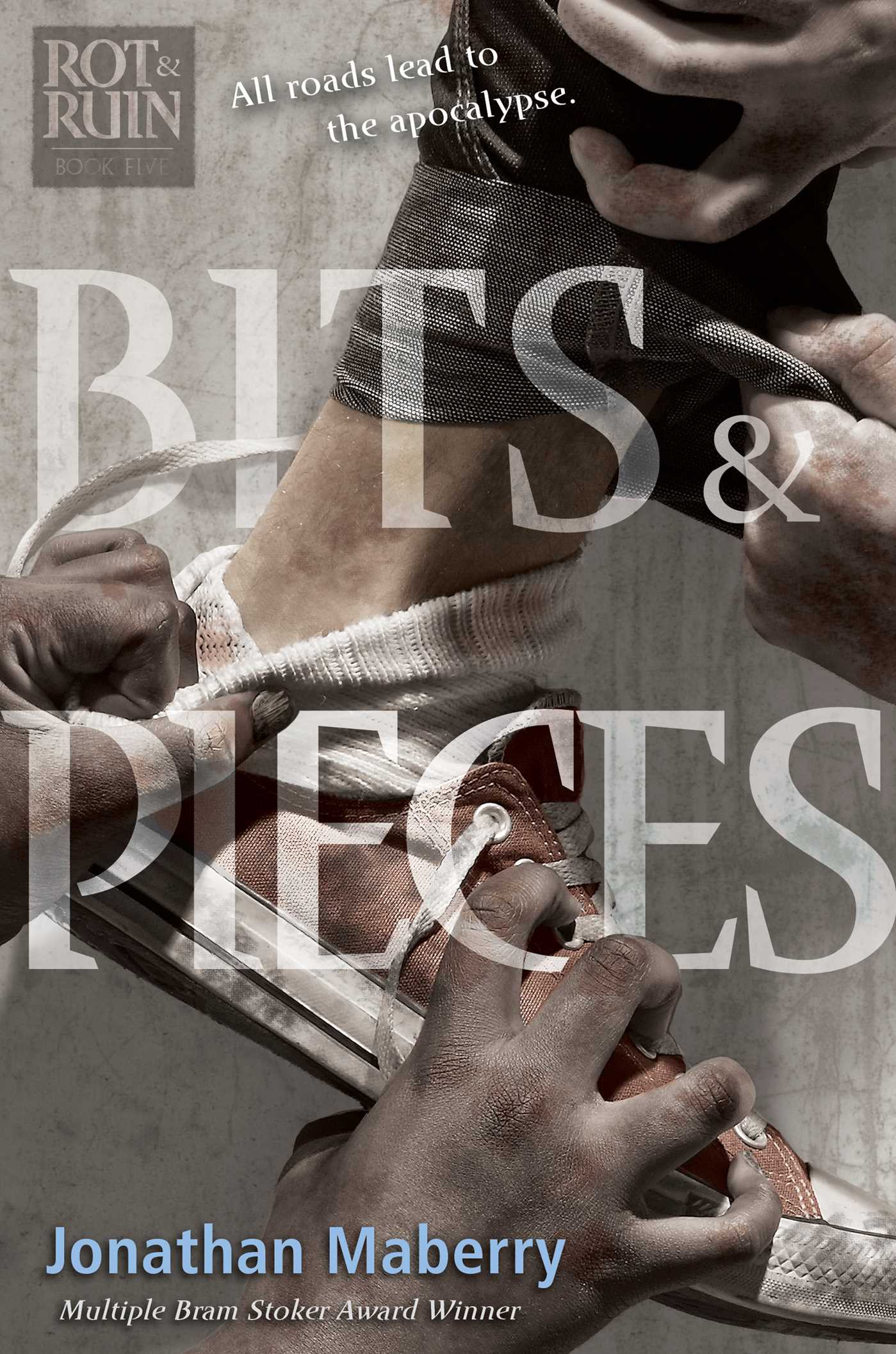 Return to the zombie apocalypse wasteland that is the Rot & Ruin in this short story collection from Jonathan Maberry.

Benny Imura’s zombie-infested adventures are well-chronicled in the gripping novels Rot & Ruin, Dust & Decay, Flesh & Bone, and Fire & Ash. But what else was happening while he was on his quest? Who were the others navigating the ravaged landscape full of zombies?

Bits & Pieces fills in the gaps about what we know about First Night, surviving the plague, and traveling the land of Rot & Ruin. Eleven all-new short stories from Nix’s journal and eleven previously published stories, including “Dead & Gone” and “Tooth & Nail,” are now together and in print for the first time, along with the first-ever script for the Rot & Ruin comic books.

Bits & Pieces FROM NIX’S JOURNAL ON FIRST NIGHT (PRIOR TO ROT & RUIN)
My name is Phoenix Riley. My friends call me Nix.

I was born right around the time the world died. A plague turned everyone into zombies. Actual living dead.

No one knows where it started. Or how. Or why.

It spread fast, though. By the time people realized that there was a problem, the problem was biting them. Then everything went crazy. There was a day the survivors call First Night. That was the point at which no one could ignore the problem. No one could say that it wasn’t really happening, or even if it was, it wasn’t happening here. It was happening everywhere.

The year I was born, the United States Census Bureau estimated that there were 6,922,000,000 people alive on planet Earth. My mom says that probably a billion people died on First Night. And over the next few days and weeks, nearly everybody died. They used to have something called the “Internet.” Before that went down, the estimates of the global death toll were at three billion and climbing. After that there were no more news reports. There was no one left to report it. And after the power grids failed, there was no way to report it.

The world went dark and it went silent.

Except for the sound the dead make. Moans. Like they’re hungry.

And they are hungry. All the time.

They want to eat people.

Animals, too. They’ll eat anything alive. That’s why the world’s so empty. The dead rose and they ate everyone.

Well, not everyone, I suppose. My teachers say that the dead killed enough people for everything to fall apart. My history teacher said the outbreak destroyed what he called “the infrastructure.” Which is police and government and hospitals and like that. My health class teacher says it was disease, malnutrition, and bad water that killed most of the others.

Problem is, no matter how someone dies, they come back to life as a zombie.

Which meant that the survivors kept having to run to find a safe place to hide. And to find food and stuff. To find medicine.

Mom ran. She took me with her.

I used to have a dad, and brothers. I never knew them. I was too little, and when Mom ran . . . she was running from them. Or from what they had become.

Mom doesn’t talk about that. I don’t think she can.

I grew up in Mountainside. It isn’t a real town, or at least it didn’t use to be. Before First Night it was a reservoir built against a mountain wall in Mariposa County in the Sierra Nevada Mountains of central California. Not too far from Yosemite National Park. A bunch of people who were on the run found it. The reservoir had a fence, and that kept the people alive. Then more and more people found it, and when the big panic started to settle down, the people sent out teams to raid local houses and towns and stores for building materials, food, beds, clothes, and all sorts of stuff. They found a construction supply company a few miles from here, and they brought back miles of chain-link fence. Pretty soon they had a kind of town.

That was fourteen years ago.

Since then people have built eight other towns along the Sierra Nevadas. At the New Year’s census, the total population of the nine towns here in central California is 28,261. Mom’s friend Tom Imura says that there are maybe five hundred to a thousand people living outside the towns. Out in the Rot and Ruin. Out where the zoms are. Loners, scavengers who raid towns for supplies, bounty hunters, and a bunch of crazy monks who live in old gas stations and who think the zoms are the meek who were supposed to inherit the earth. Add them to the people in the towns, and there are still fewer than thirty thousand people left.

Thirty thousand of us and nearly seven billion zoms.

I’ve never been outside the fence line. Neither have most of the people in town. People here hardly even talk about what’s out there. They talk about the other towns as if they’re in different countries. We get news from them, and once in a rare while a traveler goes from one town to another. But everything else is the Rot and Ruin.

My mom wants me to live here. To “be content” because I’m safe and alive.

Sometimes I think the fence isn’t just for keeping the zoms out. I think it’s to keep us in. We built it and we locked ourselves in.

But . . . I don’t know how to escape the cage when everything outside is the Ruin. Out there, everything wants to kill you. Everyone says that.

There has to be a way out.

There has to be.

Jonathan Maberry is a New York Times bestselling author, five-time Bram Stoker Award winner, and comic book writer. He writes in multiple genres including suspense, thriller, horror, science fiction, fantasy, and adventure; and he writes for adults, teens, and middle grade. His works include the Joe Ledger thrillers, Glimpse, the Rot & Ruin series, the Dead of Night series, The Wolfman, The X-Files Origins: Devil’s Advocate, Mars One, and many others. Several of his works are in development for film and TV, including V Wars, which is a Netflix original series. He is the editor of high-profile anthologies including the X-Files books, Aliens: Bug Hunt, Out of Tune, Hardboiled Horror, Baker Street Irregulars, Nights of the Living Dead, and others. He lives in Del Mar, California. Visit him at JonathanMaberry.com and on Twitter (@JonathanMaberry) and Facebook.

"[For] the zombie-apocalypse-intrigued reader, it is a welcome addition to the collection."

"An entertaining divergence from the solid series."