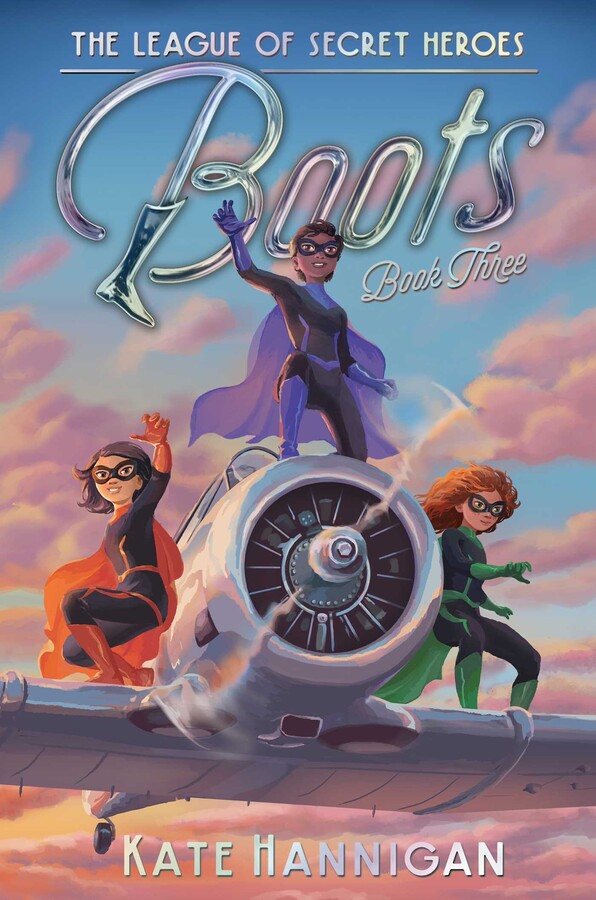 The League of Secret Heroes travel to Paris on their most critical mission yet in this third book in the action-packed, comics-inspired adventure series that’s Hidden Figures meets Wonder Woman!

When the Infinity Trinity hears of a Nazi spy plot that could bring danger to Chicago, Mae knows they must go to check on her beloved aunts, the daring World War II pilots Willa Brown and Janet Harmon.

Mae’s Granny Crumpler isn’t exactly thrilled about her granddaughter and her friends trying to get involved with something so dangerous—especially when she’s already worried about not hearing from Mae’s dad, who is serving in Europe and fighting for freedom on and off the battlefield.

But when Aunt Willa and Aunt Janet go missing, Mae knows that the sinister spy plot just got personal. They discover the evil Metallic Falcon has captured her aunts, and he is determined to thwart the Infinity Trinity’s ultimate quest to bring back Zenobia and all the missing superheroes safely.

With the help of the Women Airforce Service Pilots (WASPs) and Room Twelve, Mae, Josie, and Akiko must use all their powers and code-cracking smarts in a challenge that will take them on a high-flying loop from Chicago to Sweetwater, Texas, to a final showdown in Paris. Can the Infinity Trinity soar to new heights and complete the biggest mission of them all?

By clicking 'Sign me up' I acknowledge that I have read and agree to the privacy policy and terms of use. Free ebook offer available to NEW US subscribers only. Offer redeemable at Simon & Schuster's ebook fulfillment partner. Must redeem within 90 days. See full terms and conditions and this month's choices.
Reading Group Guide for

The League of Secret Heroes #3:

It’s time for the Infinity Trinity to face their most dangerous foe yet: the Metallic Falcon. The three girls travel from Chicago to Paris by way of Avenger Field in Texas. With World War II raging in Europe, Mae, Akiko, and Josie are eager to do their part, with the help of inspiring women aviators. They hitch a ride across the Atlantic with Jackie Cochran, the best known female pilot of her day. The three also team up with two amazing girls, British Golden Lion and French Parisian Light, who have superpowers. However, the Infinity Trinity is operating without their own superpowers, relying on their courage, brains, and ingenuity to try to save the day. Nonstop action and some of the coolest aviators ever will have readers cheering.

1. What is the central mission that the Infinity Trinity faces? Explain where their quest takes them and who their allies are. What enemies do they face? Why do they care so much about succeeding?

2. Why do the girls go to Chicago? What is Granny’s reaction to Mae coming home? How does Mae explain it? What are some locations and components of Chicago that appear in the story?

3. Discuss this statement about courage found near the beginning of the novel, and tie it to the girls’ actions in the rest of the story: “Bravery isn’t about battling back supervillains. Most of the time, being brave means looking at the things that scare us and pushing past them.”

4. In illustrations included early in the novel, Mae calls Aunt Janet and Aunt Willa her “guardian angels.” What does she mean? What do you learn about the aunts and their lives? How have they been important to Mae’s upbringing? What role do they play in the quest to reach the Eiffel Tower? Identify hints that they might be connected to Room Twelve.

5. Explain the observation that “Mae’s daddy says he’s fighting two wars: One is the war against Germany and Japan. And the other is the war against segregation at home.” Why does Granny call it the Double V campaign? Give some examples of racial bias shown in the novel and provided in the author’s note.

6. Discuss the injustices in the fact that black men risked their lives in the military during both world wars to protect the US, and then returned home to a country that treated them like second-class citizens.

7. Describe the Metallic Falcon and his abilities. When does he first appear? What does he do to the Infinity Trinity? Why does he want to destroy them? How does the author portray him as an effective villain?

8. When their superpowers are working, what can each girl do to contribute to the mission? How do their powers work well together and complement one another’s abilities? Who knows about their powers? Which important people in their lives don’t know about the superpowers, and why?

9. It’s a major problem when the girls lose the use of their superpowers. Yet Josie realizes at one point, “Maybe losing our superpowers wasn’t so bad.” What makes her say that? What are some of the girls’ strengths that don’t depend on magic? Give specific examples.

10. What are Nova the Suncatcher’s powers and abilities? What do the girls admire about her? How do they contact her? Describe their first meeting with her. Why does she say that the Infinity Trinity is “our best hope”? When else does she appear in the story?

11. Who were the WASPs, and what were their duties during World War II? How do the girls end up at Avenger Field, and what do they learn about it? Describe some of the WASPs they meet there and how the women help the Infinity Trinity.

12. The girls are pursued over Paris by a German Messerschmitt painted to look like a ferocious shark. How does Mae use her piloting skills to keep the plane from destroying them? How do her aunts help? Explain how the author creates suspense and drama in the scene.

14. “‘Just because we’re not adults like you all doesn’t mean we can’t help to fight this war,’” Mae says to Zenobia and the Palomino. What do the adults believe the girls should do, and why? What arguments do the girls make to convince the adults that they should be able to help?

15. Backed by her friends, including Golden Lion and Parisian Light, Josie tells the Palomino and Zenobia, “‘More than anyone, we want to make sure that good triumphs over evil. Because we’re the next to lead. We’re the ones to inherit this world, for good or bad.’” Relate this statement to the choices that the girls make.

16. The girls’ love of comic books is reflected in the graphic novel sections of the story. Why do you think the author chooses to add them? What do the illustrated sections add to your understanding of the story and characters? Do they affect your enjoyment of the novel? If so, how?

17. As the story and author’s note indicate, American women who wanted to be combat pilots were not allowed to do so; the Soviet Union did have female combat pilots during the war. Why did the military restrict women in this way? How did the women react? What has changed about this restriction in the years since World War II?

18. In her note, the author says that the books about the Infinity Trinity are “meant to entertain,” but “they’re also meant to inspire.” What does she mean by this? How can kids without superpowers help in times of war? What can kids do now to make the world a better place?

When Golden Lion and Parisian Light start talking about superpowers, Mae changes the subject to head off “any new back-and-forth superpower debates.” Have teams of two students choose a different superpower they consider to be one of the best, and prepare to defend it with specific reasons and examples. Then hold round-robin debates, having the class vote on the winner of each. Winners go on to the next round until an overall winner is chosen.

Boots pays tribute to the WASPs and other female aviators, with Jackie Cochran as a character and Bessie Coleman mentioned as an inspiration. The aunts are also drawn from the real fliers Willa Brown and Janet Harmon. Drawing from print and online resources, such as those in the author’s note and the websites below, have students write a paper about the WASPs, female pilots past and present, or other aspects of women aviators.

As Cold As a Milkshake

“Like an oversize Popsicle stick,” “as cold as a milkshake,” and “like a Ping-Pong ball” are just a few of the similes that enrich the narrative. Ask students to each find three more examples that appeal to them. For each example, students should brainstorm two similes that the author could have used instead.

The girls send a secret message to Nova the Sunchaser using a paper airplane. Ask students to use the rail-fence cipher to create a coded message about the novel. Have them print it on an 8 1/2 x 11 piece of paper and then fold the paper into a paper airplane. In a big area, have students launch their planes and then pick up another plane to decipher its message.

Up in the Sky

Many different World War II planes are mentioned in the narrative, including “the PT-19s, and the shiny silver AT-6 Texan,” the Mustangs, and the German Messerschmitt. Using the Smithsonian’s Air & Space magazine website, have students choose one of these or another World War II plane, and report at least five interesting facts about it to the class, sharing a photograph if possible. https://www.airspacemag.com/military-aviation/history-ww2-25-airplanes-180954056/

Guide written by Kathleen Odean, a youth librarian for seventeen years who chaired the 2002 Newberry Award Committee. She now gives all-day workshops on new books for children and teens. She tweets at @kathleenodean. 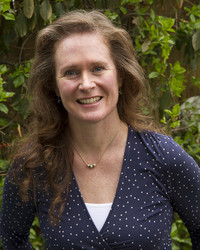 Kate Hannigan is a noted author with a special passion for stories that empower girls and women. Her picture book biography, A Lady Has the Floor, received four starred reviews and was named a Junior Library Guild Selection. In addition to the 2016 Golden Kite Award for Middle Grade Fiction, The Detective’s Assistant also received two starred reviews and was a Booklist Editor’s Choice, among many other accolades. Hannigan presented at NCTE on “Our Mighty Girls,” about girl power in middle grade fiction, and was a judge for 2018’s Golden Kite Awards. Between her active presence on social media (@KateChicago), her work as founder of the Hyde Park/South Side Chicago chapter of SCBWI, and as a busy conference speaker, Kate is an involved, vocal, and respected member of the kid lit community. Visit her online at KateHannigan.com.

Patrick Spaziante is an American comic book artist and children’s book illustrator known for his work for Archie Comics, in particular his interior pencil and cover work for Sonic the Hedgehog, Sonic X, and Sonic Universe.

More books in this series: The League of Secret Heroes