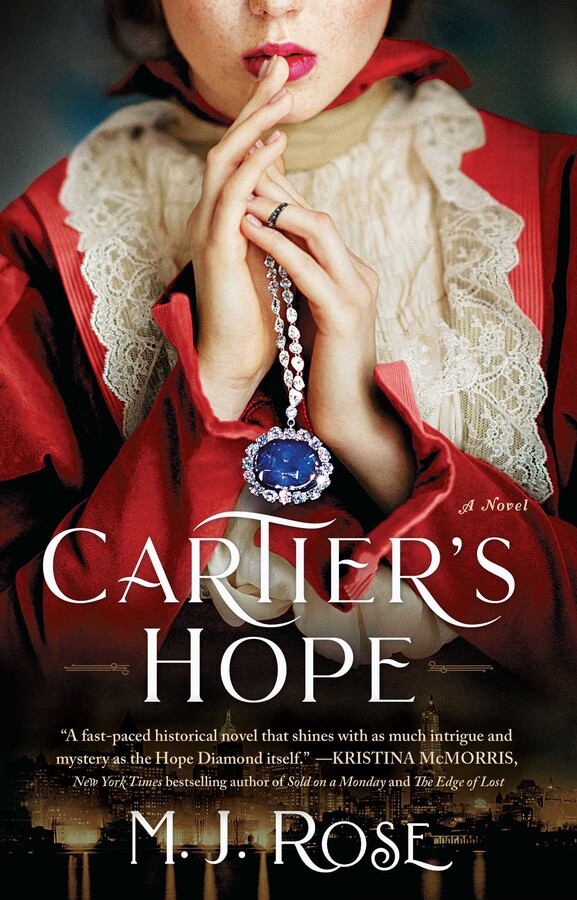 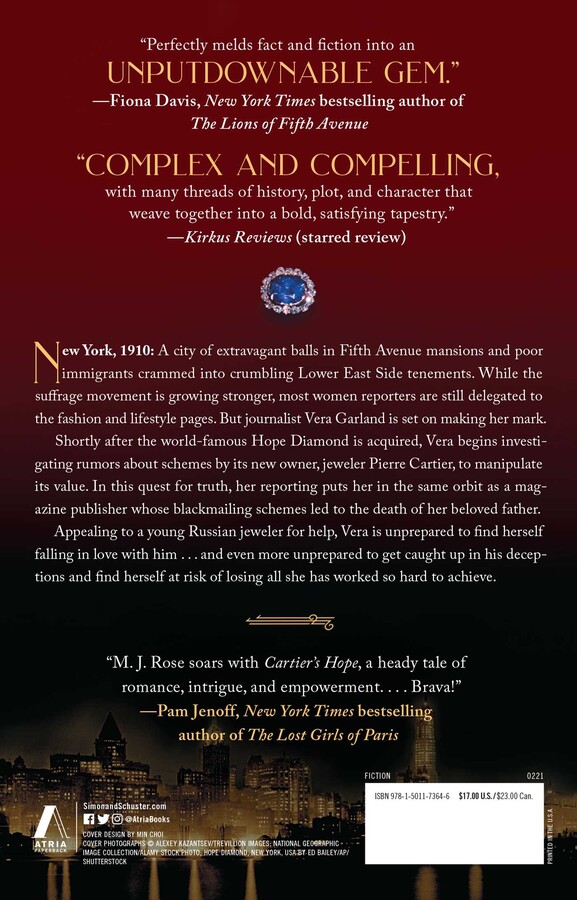 By M. J. Rose
PRICE MAY VARY BY RETAILER

New York, 1910: A city of extravagant balls in Fifth Avenue mansions and poor immigrants crammed into crumbling Lower East Side tenements. A city where the suffrage movement is growing stronger every day, but most women reporters are still delegated to the fashion and lifestyle pages. But Vera Garland is set on making her mark in a man’s world of serious journalism.

Shortly after the world-famous Hope Diamond is acquired for a record sum, Vera begins investigating rumors about schemes by its new owner, jeweler Pierre Cartier, to manipulate its value. Vera is determined to find the truth behind the notorious diamond and its mysterious curses, especially when her reporting puts her in the same orbit as a magazine publisher whose blackmailing schemes led to the death of her beloved father.

“Vivid…[and] memorable” (Publishers Weekly), Cartier’s Hope is “a twisting tale of greed, revenge, and masked identities that put love and lives at risk. A fast-paced historical novel that shines with as much intrigue and mystery as the Hope Diamond itself” (Beatriz Williams, New York Times bestselling author). 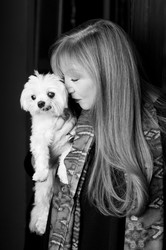 New York Times bestselling author M.J. Rose grew up in New York City exploring the labyrinthine galleries of the Metropolitan Museum and the dark tunnels and lush gardens of Central Park. She is the author of more than a dozen novels, the founder of the first marketing company for authors, AuthorBuzz.com and cofounder of 1001DarkNights.com She lives in Connecticut. Visit her online at MJRose.com.

"Rose's latest stand-alone is a Gilded Age gem highlighting social injustices and an ahead-of-her-time woman's resolve to make a difference. Rose's elegant narrative and timely dialog express her characters' humanity and inhumanities, while her research and attention to every detail occasionally make it difficult to separate facts from fiction. A must-read for lovers of atmospheric historical fiction." —Library Journal (Starred Review)

"MJ Rose’s latest encapsulates everything I love about historical fiction: a heroine whose journey is as timely today as it is in the 1910s, a glamorous setting that perfectly melds fact and fiction into an unputdownable tale, and at the sparkling center of it all: New York City. A true gem by an author at the top of her game." —Fiona Davis, nationally bestselling author of The Chelsea Girls

"M.J. Rose soars with Cartier’s Hope, a heady tale of romance, intrigue and empowerment. The contrasting poverty and wealth of turn of the century New York make for a vivid backdrop for the story of Vera, a journalist determined to go beyond the confines imposed on women in her field and learn the truth about the Hope Diamond while confronting her own dark past. Readers will root for journalist Vera on her page-turning quest for the truths that are both intimate and universal. Brava!" —Pam Jenoff, New York Times bestselling author of The Lost Girls of Paris

“From the very first page, Cartier’s Hope plunges the reader into the fascinating world of New York jewelers, journalists, and high society at the dawn of the Gilded Age. With her signature elegance and attention to detail, M.J. Rose weaves a twisting tale of greed, revenge, and masked identities that put love and lives at risk. A fast-paced historical novel that shines with as much intrigue and mystery as the Hope Diamond itself.” —Kristina McMorris, New York Times bestselling author of Sold on a Monday and The Edge of Lost

"A fast-paced tale of secret identities set against the glamorous backdrop of New York's high society, Cartier's Hope sparkles with intrigue, romance, and passion, and surprises with an inspiring journalist heroine whose desire to break free of society's constraints and shed light on injustice is timely, relevant, and sure to resonate with readers. Vera's quest for the truth leads the reader deep into the mysteries surrounding one of the world's most famous jewels--and ends with a shocking twist you won't see coming. Unputdownable!" --Laura Kamoie, New York Times bestselling author of My Dear Hamilton

“Nobody conjures up historical mystery like MJ Rose, and this brilliant, absorbing novel has it all. From its utterly convincing setting in early 20th-century New York City, to the determined, marvelously drawn journalist whose quest for justice sets the story in motion, to the page-turning mystery surrounding the legendary Hope Diamond, Cartier’s Hope immerses readers in an unforgettable world that beguiles to the final page. Rose proves once again that her superb storytelling and powerful prose are second to none." —Beatriz Williams, New York Times bestselling author of The Golden Hour

“Rose's newest title is complex and compelling, with many threads of history, plot, and character that weave together into a bold, satisfying tapestry. . . . Smart, fierce, lovely, and intricate.” —Kirkus (starred review)

“In M.J. Rose's hands, the period of time in which Pierre Cartier had ownership of this legendary diamond becomes a fascinating story about family secrets, a woman's place in the world, and what's really true. Cartier’s Hope will transport you to the Gilded Age of 1910s New York City and seduce you with its charm.” —POPSUGAR

“The mix of history with compelling characters both real and fictional is the true priceless treasure in this beautifully written novel.” —Associated Press

By M. J. Rose
PRICE MAY VARY BY RETAILER