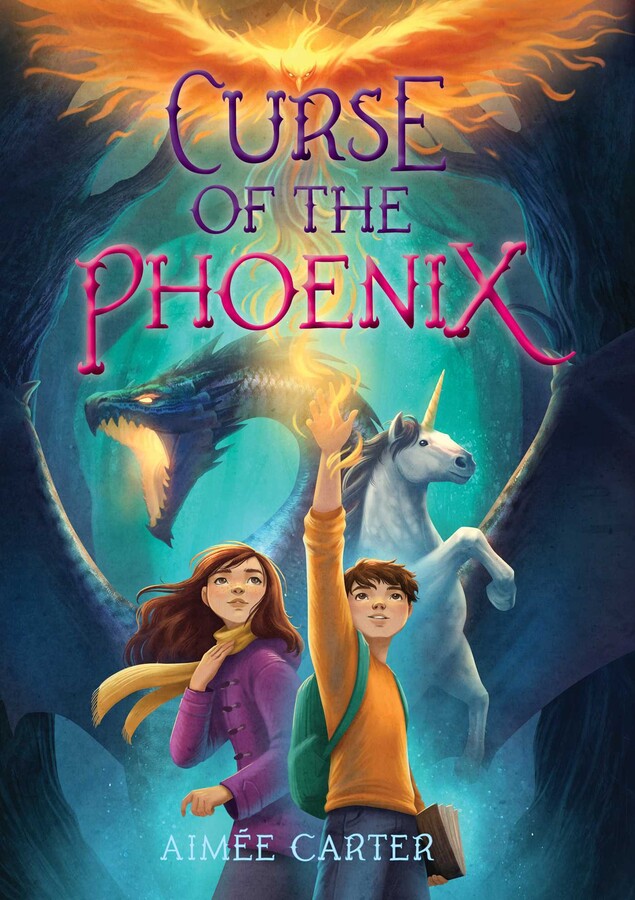 Curse of the Phoenix

By Aimée Carter
PRICE MAY VARY BY RETAILER

The creatures of legend are real—and it’s up to twins Zac and Lu to save them in this fun-filled middle grade adventure perfect for fans of Fablehaven and The Hotel Between.

Twins Zac and Lu grew up on their mother’s stories of the Wildewoods, an imaginary land where mythical beasts roam free. These creatures fill the pages of Zac’s sketchbooks and inspire Lu’s love of animals, and on most days, they’re the only thing the twins have in common.

When their mother dies, a heartbroken Lu and Zac are shipped off to England to spend the summer with relatives they’ve never met. But it doesn’t take the twins long to uncover the incredible secret tucked away in the forest behind their ancestral home: their mother’s wonderful tales about unicorns and dragons and centaurs weren’t make-believe after all. Their family serves as keepers of the Wildewoods, the last place on earth where these mythical creatures can live safe from human harm.

But there are also many dangers in these lands—as well as a terrible curse. When Zac and Lu fall victim to it, their only hope is finding the very last living phoenix left in the world. But will breaking the curse mean the end of the Wildewoods?

Chapter 1: Zac 1 ZAC
SOMETHING WAS WRONG WITH THE dragon’s tail.

Zac Hadley squinted at his drawing, tilting his head and holding it at arm’s length to try to gain some perspective. The unicorns in the valley looked okay, and he was pretty sure he’d nailed the shading in the mountains. But the longer he stared at the dragon that perched on the words THE WILDEWOODS SAGA written in block letters, the more distorted the image seemed, until it didn’t look like a dragon at all, but rather a puffy lizard with a tail that was too big for its body. It wasn’t right. Nothing he drew was right anymore.

Frustrated, he tossed his graphic novel onto the foot of his bed. A month ago, he would have already been erasing the tail, determined to start over. Maybe he would have shown it to his mother first and asked what she thought. But now…

His stomach rumbled. Glancing at his watch, he realized with a jolt that it was three o’clock. He’d missed lunch. No—his father hadn’t called him down for lunch in the first place.

Hungry and confused, Zac plodded across the hardwood floor and into the hallway. Pausing at the top of the stairs, he listened for the clacking of fingers on a keyboard as his father worked from home, the way he had for the past month, but Zac heard nothing. The entire house seemed quiet.

“Dad?” called Zac. His heart began to race as he scrambled down the steps, nearly slipping on the polished wood. “Dad? Where are you?”

He darted across the living room, narrowly missing a coffee table that was cluttered with pop cans and a greasy pizza box from the night before. The door to his father’s office was closed, and he skidded toward it, stopping half an inch from the knob as his chest began to tighten.

It wouldn’t happen again. His father was fine. Sleeping, maybe, or wearing headphones and distracted by his work. Everything would be okay.

“Dad?” His voice shook as he knocked on the door. Not waiting for an answer, he pushed it open, and in that split second, he imagined what he would see on the other side. His dad in his office chair, reading a book. Or leaned back with his mouth open as he snored. Or—

The image appeared in his mind before he could stop it. He’d been hungry that afternoon, too, and wondering if his mother had finished lunch yet. He hadn’t known then to be afraid of walking into quiet rooms that should have been noisy.

He’d expected to see her standing at the stove and stirring the contents of a pot, or maybe pulling plates out of the cabinet. Instead she had been lying on the floor, motionless.

For an instant, that was all Zac could see as he stood in the open doorway of his father’s office. He was cold now, and he could barely draw a breath, but none of that seemed to matter as he relived the worst moment of his life. It had been a month ago now—a month and four days—but Zac still couldn’t make himself walk into the kitchen.

“Zac?” His father’s voice cut through the fog, and Zac blinked as the present materialized around him again. The curtains in the office were drawn, and his father sat at his desk, a phone held up to his ear. “Is everything all right?”

“I—” Zac tried to swallow, but his throat was too tight now, and he couldn’t speak. Stars danced in front of him, and he clutched the knob for balance.

“Merle, I’ll call you back,” said his father urgently into the phone. Dropping it on his desk with a thud, he hurried toward Zac, hovering over him anxiously. “Are you okay? Do you need your inhaler? Where is it?” He looked around, as if expecting to find it on one of the side tables cluttered with old bottles and documents, but of course it wasn’t there.

Zac shook his head. Now that he could see his father and knew he was all right, the tightness was easing. He wouldn’t be running any races soon—or ever—but it wasn’t a normal asthma attack. This kind had been happening more and more lately, and Zac had a feeling that mentioning it to his father would only result in more trips to the doctor. “I just—didn’t hear you call for lunch,” he said, his voice hoarse.

“Oh,” said his father, and Zac noticed his eyes were swollen and rimmed with red. “Right. Lunch. I thought you had leftovers from last night.”

“Yeah, but you need to heat them up for me,” he said, sounding pathetic even to himself. His father frowned.

“You’re twelve years old, Zac,” he said gently. “You can heat up your own food.”

Zac pressed his lips together. It was pointless to argue—they both knew why he wouldn’t go into the kitchen. But no matter how many times his father urged him, he couldn’t do it. Not yet.

His father sighed, his shoulders hunched. “I’ll heat them up, but this is the last time, all right? Tomorrow, you make your own—”

“Help!” An ear-piercing cry echoed from the foyer as the front door slammed open, hitting the wall with a resounding crack. “Dad—help!”

Aimée Carter is a graduate of the University of Michigan and the author of over a dozen books. After two successful fantasy series for young adults, she turned her attention to middle grade readers with Simon Thorn, now a #1 internationally bestselling series under the name Animox. Visit her at AimeeCarter.com.

"A harmonious mix of lighter fantasy elements and the more somber portrayal of the family’s grieving process....An imaginative adventure with emotional depth."

Curse of the Phoenix

By Aimée Carter
PRICE MAY VARY BY RETAILER