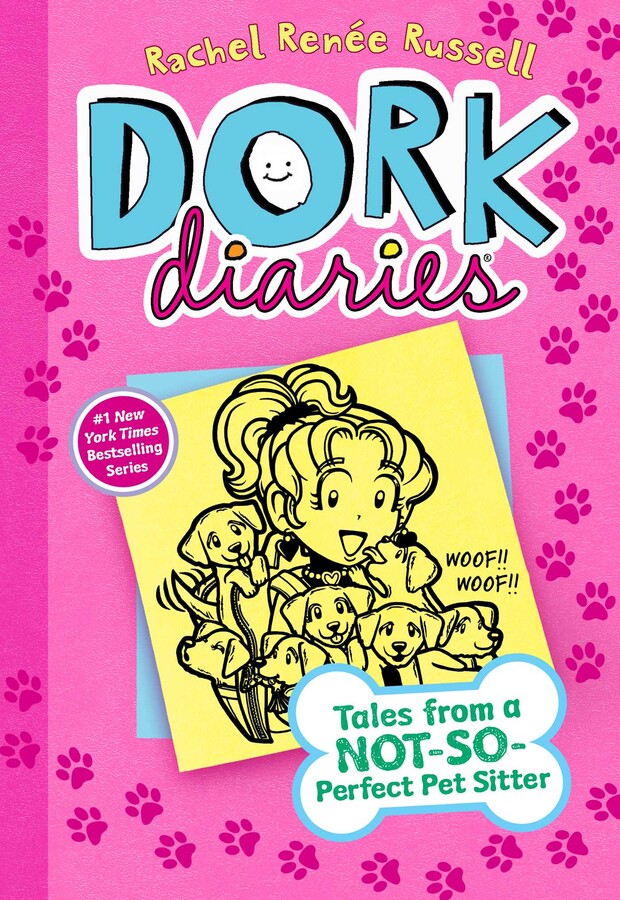 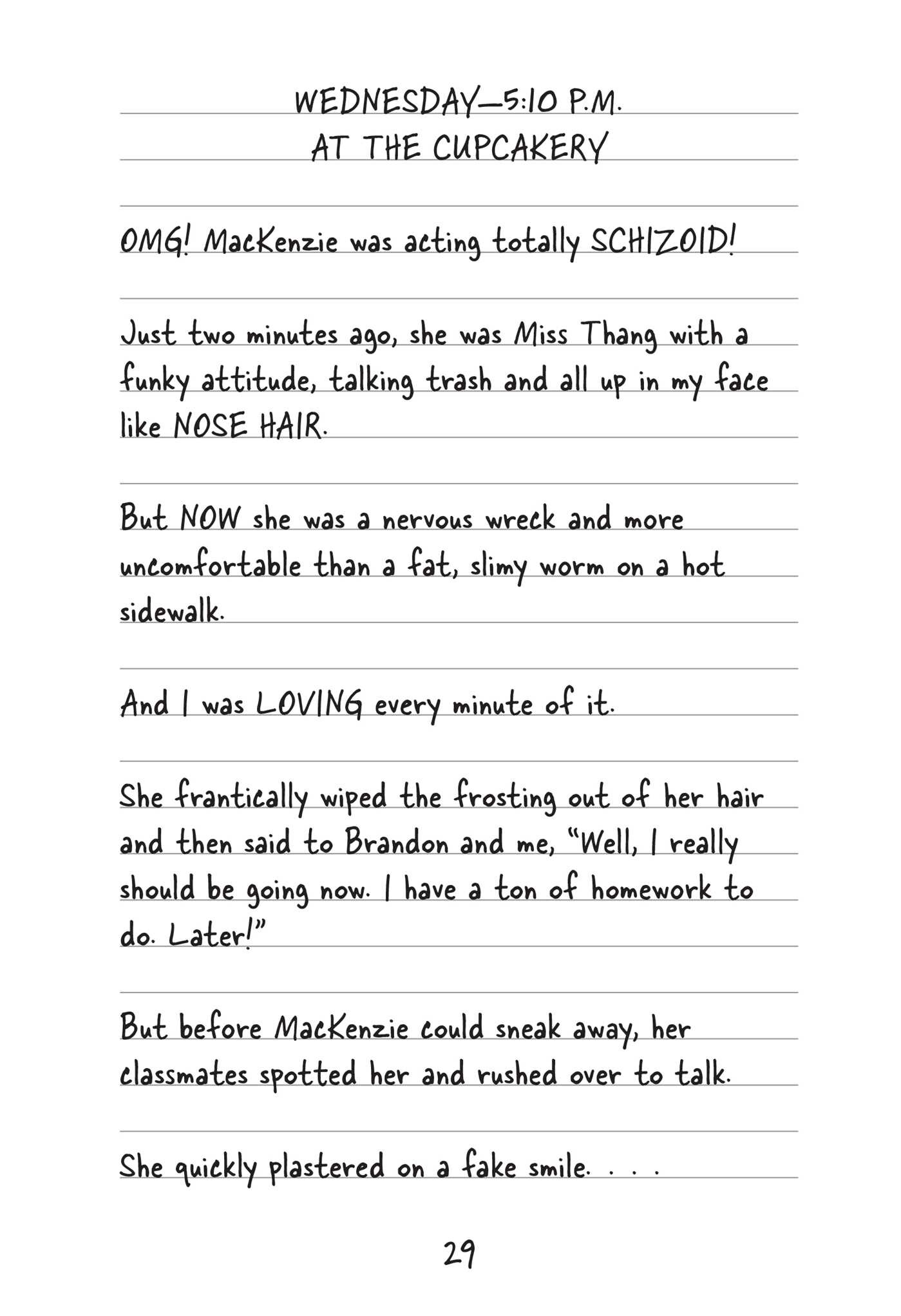 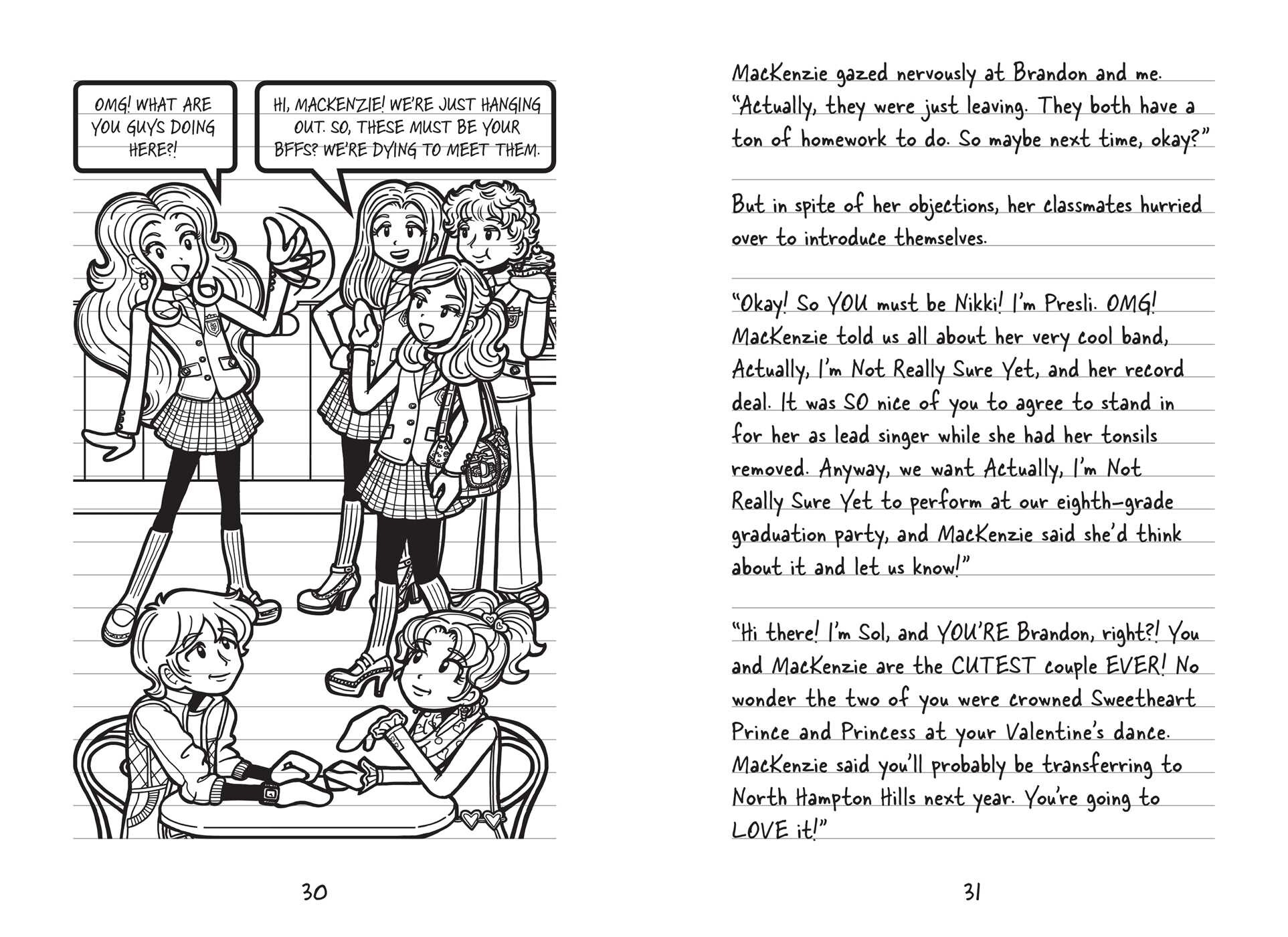 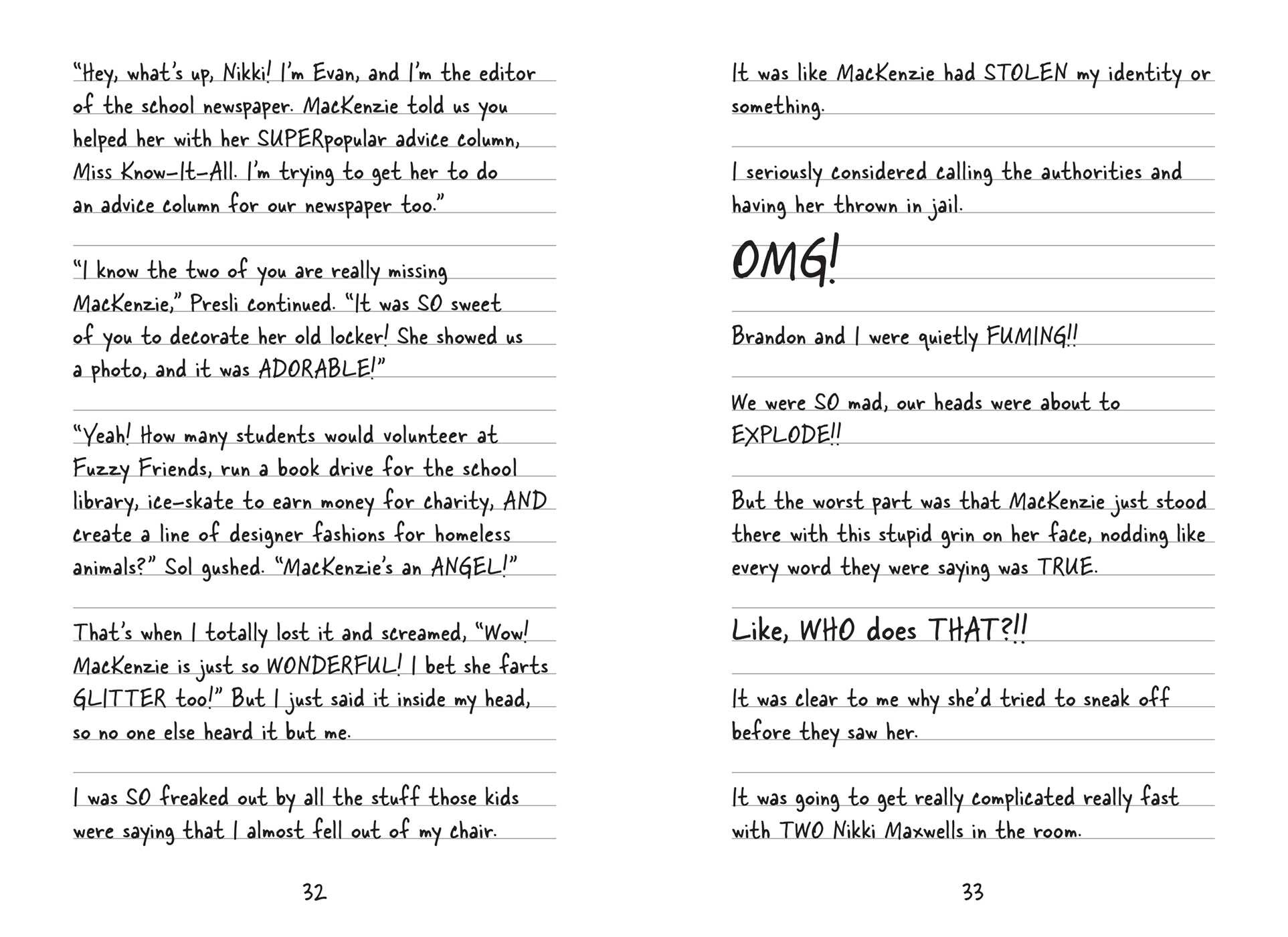 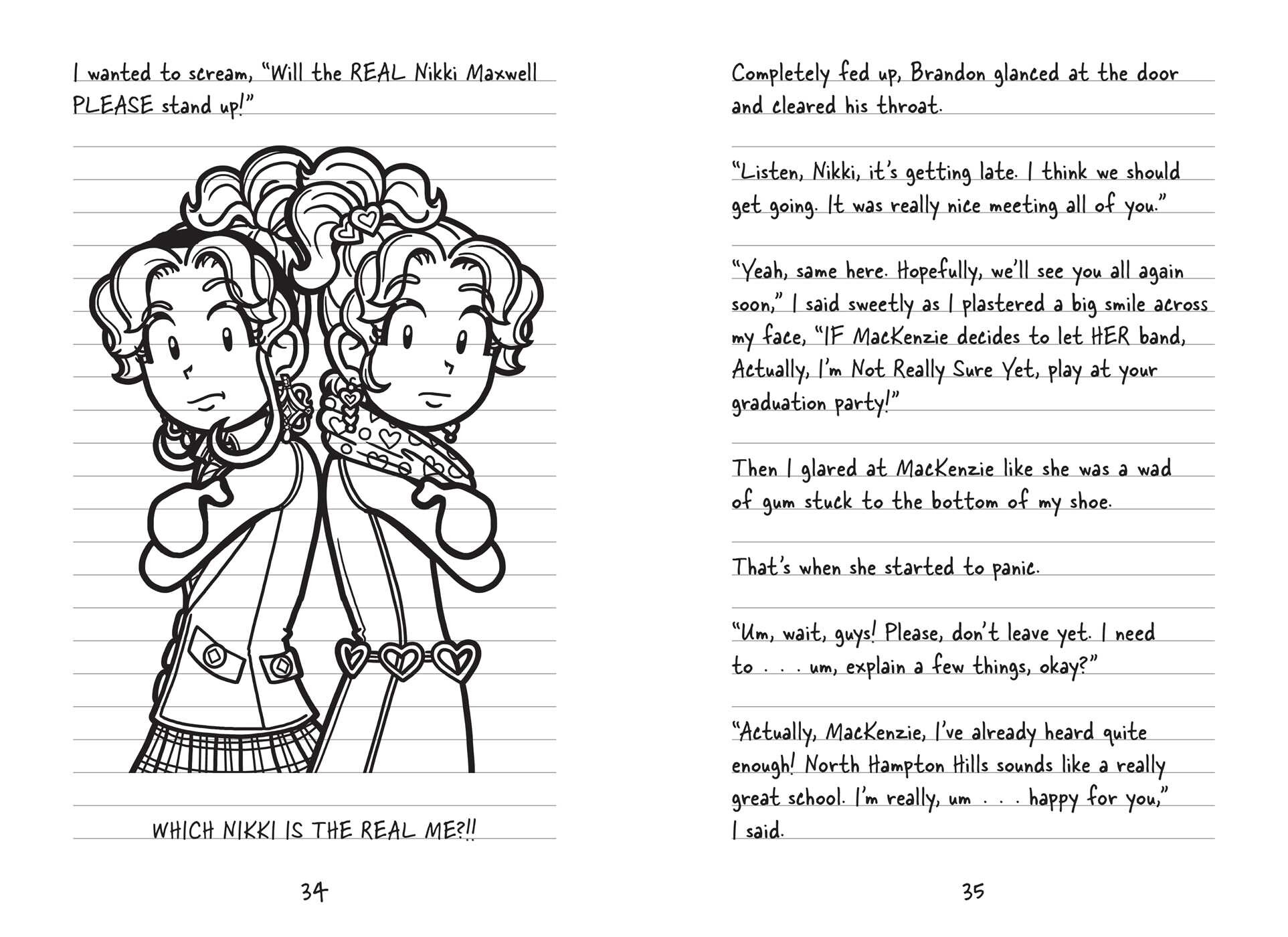 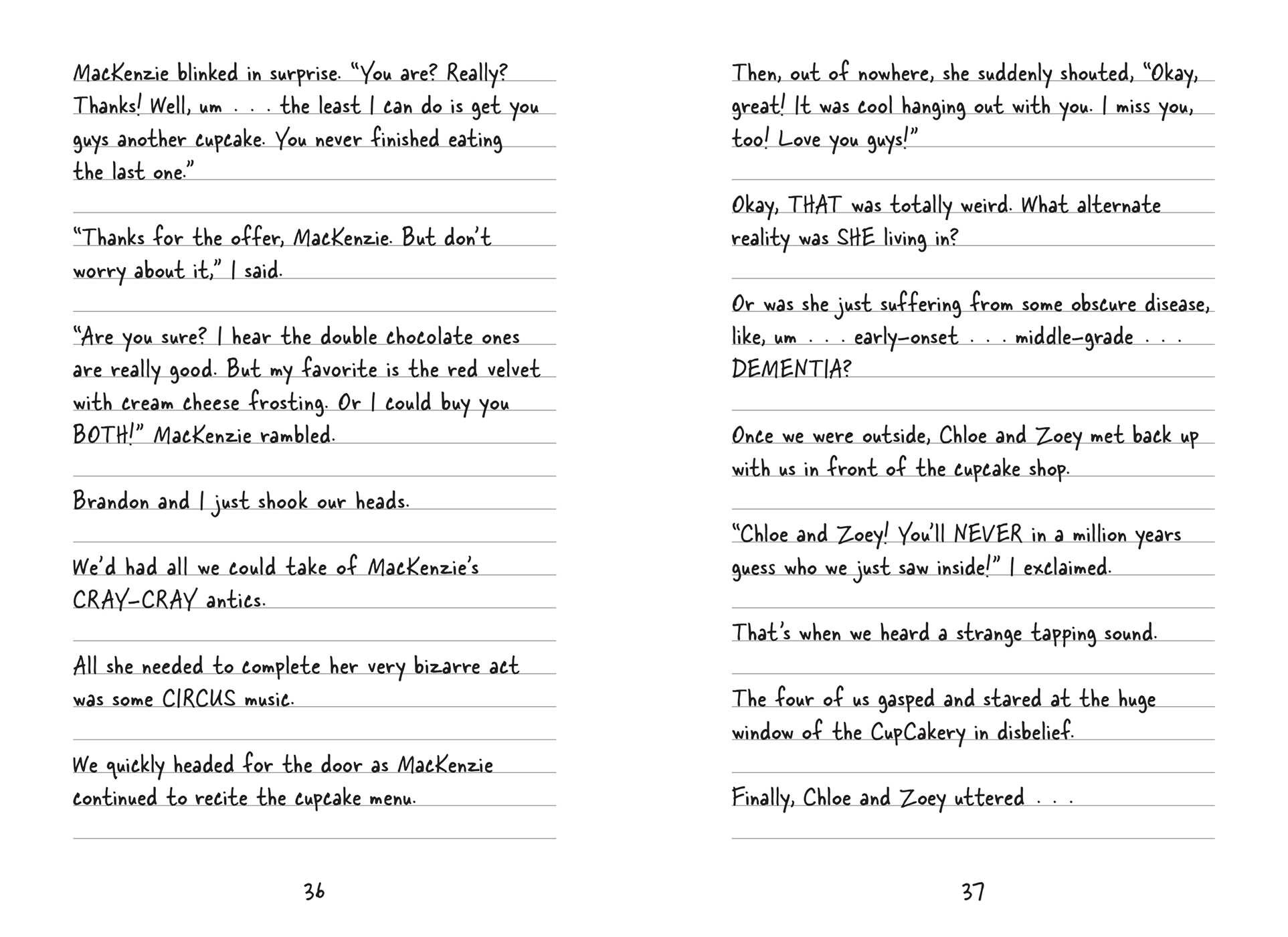 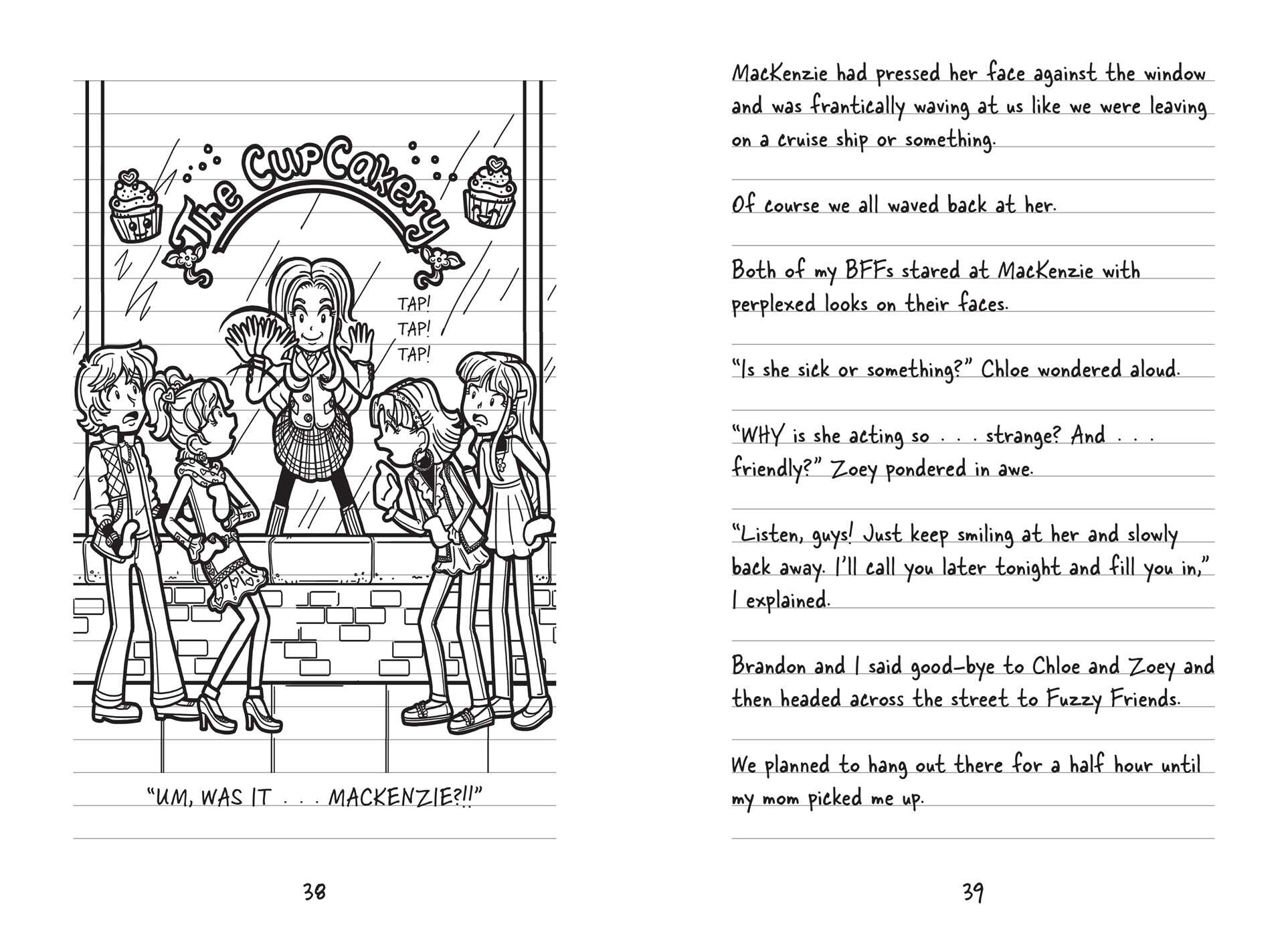 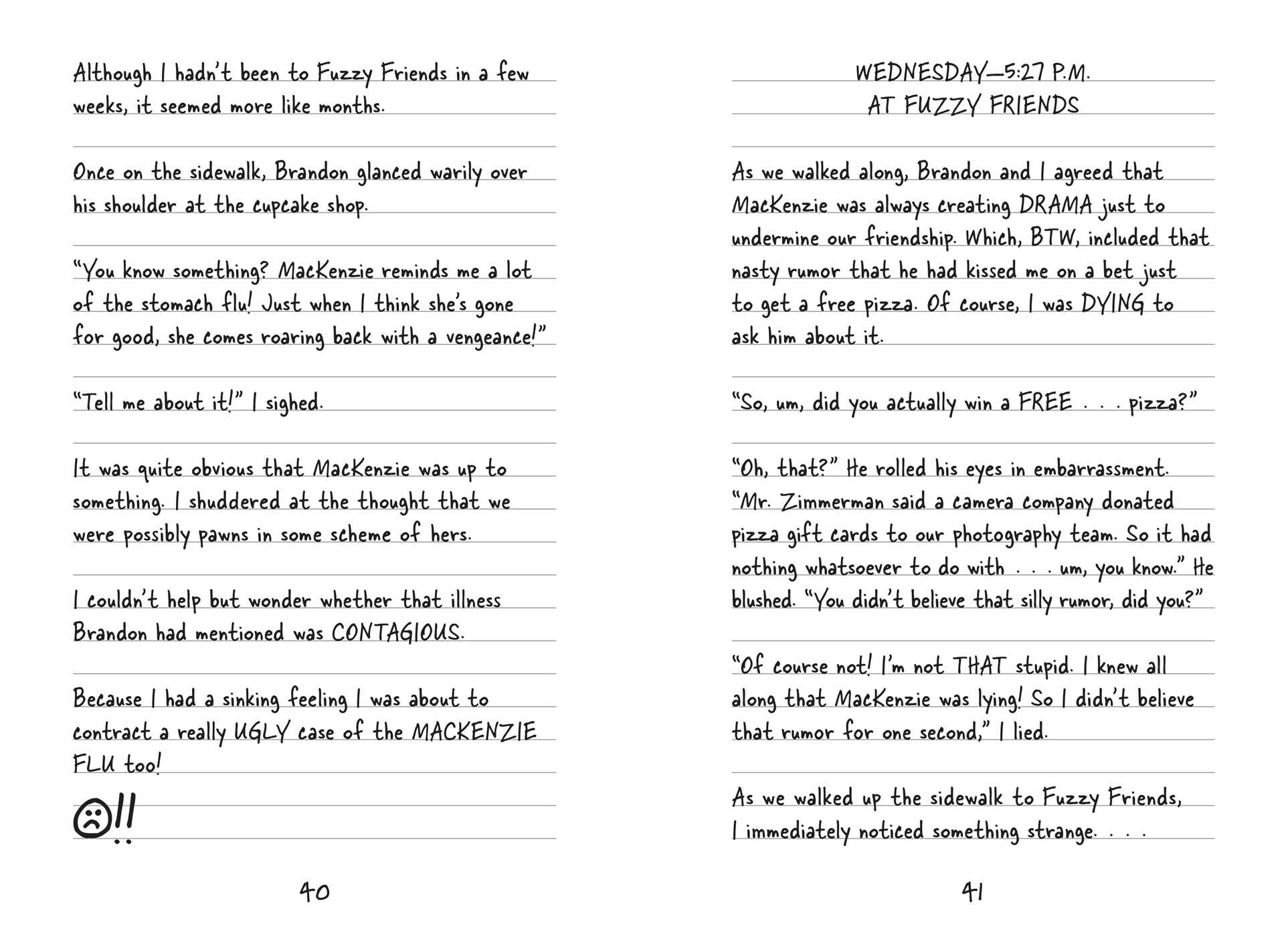 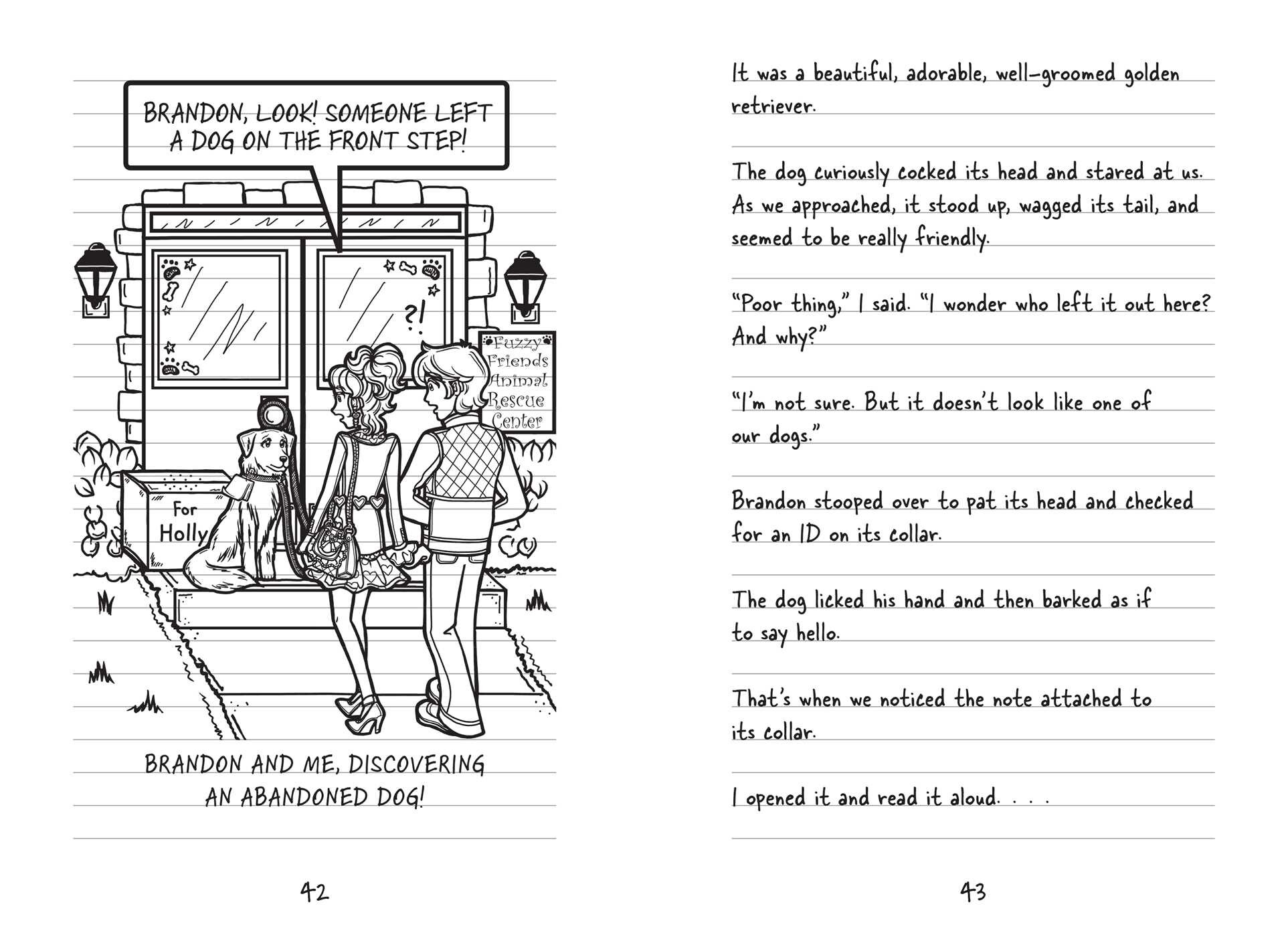 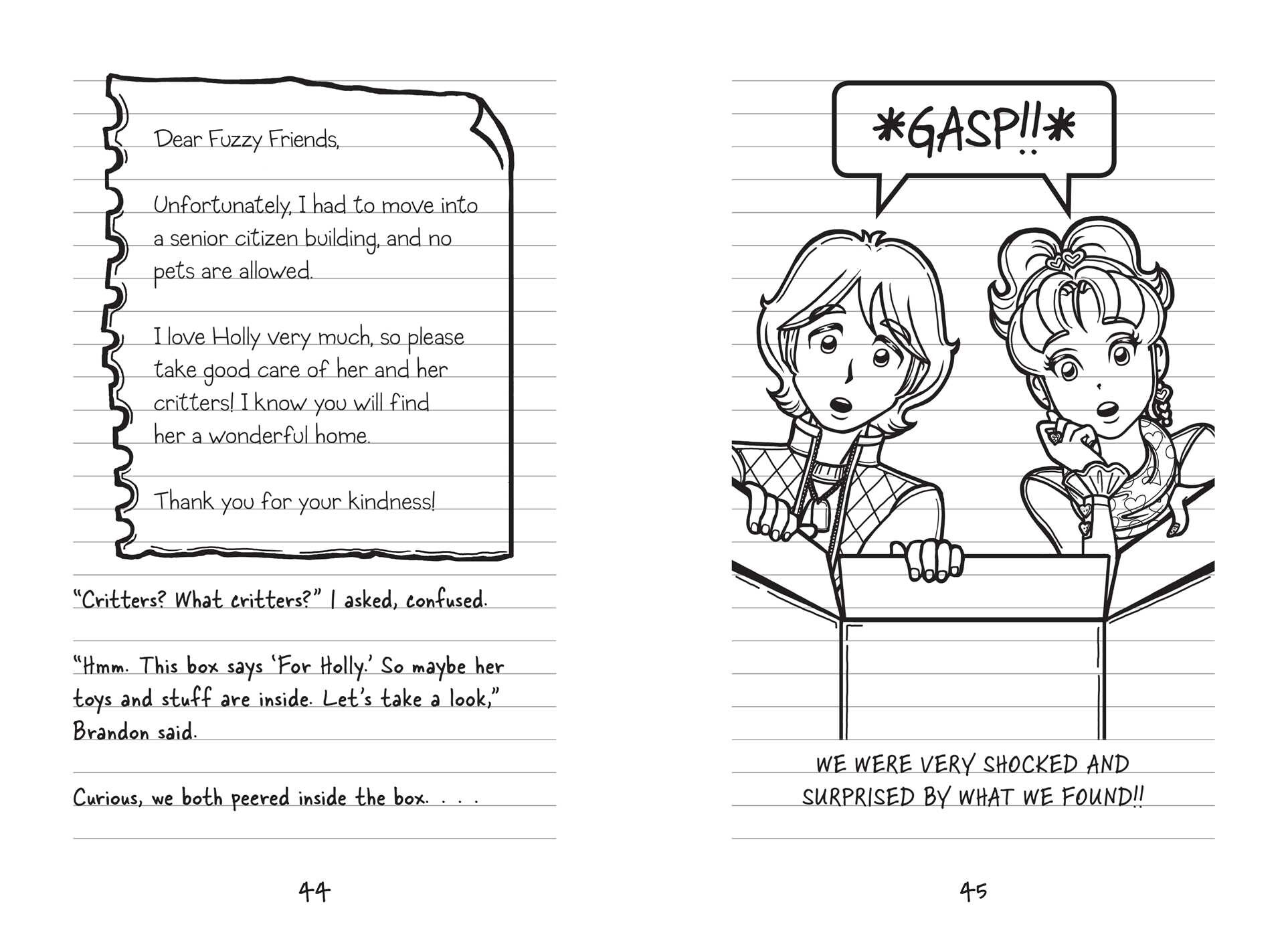 Tales from a Not-So-Perfect Pet Sitter

Nikki and her friends Brandon, Chloe, and Zoey are teamed up on an important mission in the tenth book in the #1 New York Times bestselling Dork Diaries series.

Nikki has to hide seven ADORKABLE puppies from two parents, one nosy little sister, an entire middle school, and…one mean girl out for revenge, MacKenzie Hollister. If anyone can do it, it’s Nikki…but not without some hilarious challenges along the way!

If I hear MacKenzie Hollister’s name one more time, I’m going to . . . SCREAM!!!

I can’t believe everyone at this school is STILL talking about her. It’s like they’re obsessed or something!

“If MacKenzie were here, she’d LOVE this!”

“If MacKenzie were here, she’d HATE that!”

“This school will never be the same without MacKenzie!”

“OMG! I miss MacKenzie SO much!”

ME, HAVING A COMPLETE NERVOUS BREAKDOWN BECAUSE I’M SO SICK OF EVERYONE TALKING ABOUT MACKENZIE!

Listen up, people! MacKenzie’s been GONE for an entire week, and she’s NOT coming back!!

So cry yourself a river, build a bridge, and get over it already!!

I was as shocked and surprised as everyone else when she left so abruptly.

But MacKenzie HATED MY GUTS and made my life totally MISERABLE.

And, to be honest, it seems like she’s STILL here.

I know this sounds weird, but it’s almost like I can FEEL her presence even now as I’m writing in my diary.

But that’s probably because the TACKY JUNK kids are leaving for her IS HOGGING UP ALL THE SPACE AT MY LOCKER !!!!

ME, TOTALLY DISGUSTED BY THE JUNK HOGGING UP MY SPACE !!

I’m sure she’s LOVING that her former ex-BFF, Jessica, turned her empty locker into a “We Miss You, MacKenzie!!” shrine, complete with its own Facebook page!

It’s obvious to me that MacKenzie is STILL manipulating students.

Especially after that very pathetic and overdramatic FAREWELL LETTER she e-mailed to our school newspaper this morning.

The editor actually published it online for the entire school to read.

OMG! MacKenzie went on and on about how she was tired of the needless suffering and had decided to end it all by moving on to a much better place.

I’m sure she said all that stuff to make everyone feel SORRY for her.

Just in case I decide to EXPOSE all the TERRIBLE things she did before she left.

Just thinking about all this is making me so ANGRY I could chew . . . ROCKS !!

I know I probably shouldn’t say this, because it’s kind of rude. MacKenzie reminds me of one of those disposable baby diapers!! Why?

THEY’RE BOTH PLASTIC, TOTALLY SELF-ABSORBED, AND FULL OF POOP!!

I STILL haven’t gotten over all the mean stuff MacKenzie did. Like stealing my diary, breaking into my Miss Know-It-All website, sending really mean fake advice letters to students, and spreading lies and nasty rumors.

And now SHE’S playing the victim just because of a silly video someone sent around of her freaking out over a bug in her hair?! Yeah, right!

Anyway, MacKenzie ended her so-called suffering at Westchester Country Day Middle School by moving on to a so-called better place. . . .

It’s a really posh prep school for the children of celebs, politicians, business tycoons, and royalty. Although, now that I think about it, MacKenzie just might fit in with the royalty at that school.

Because she’s the biggest DRAMA QUEEN in the history of the universe !! . . .

Everyone is also RAVING about her new school.

According to MacKenzie, it has a French chef, a Starbucks, riding stables, a spa, a helicopter landing pad, and a plaza of designer boutiques so kids can shop during lunch and after school hours.

And get this! She said her school has ATM machines in every hall, right next to drinking fountains that dispense seven different fruit-flavored waters.

But MacKenzie is such a pathological LIAR, I was starting to wonder if her FAB school even existed.

I wouldn’t have been a bit surprised if she’d completely made it up just to impress everyone, when she’s really being homeschooled.

So I googled the school and actually found its official website.

That place is AMAZING!!!

It reminds me a lot of Harry Potter’s school, Hogwarts.

I just hope MacKenzie is finally happy (assuming she actually even goes there).

Hmm . . . I wonder if North Hampton Hills would award a full scholarship to a very deserving student in exchange for BUG extermination services?

But hey, it wouldn’t be the first school to make a deal like that. RIGHT?!

Anyway, now that MacKenzie is gone, MY life is going to be PERFECT !

Well, I need to stop ranting writing and get going.

I’m supposed to meet Chloe, Zoey, and Brandon at the CupCakery in twenty minutes, and I STILL need to change into my favorite dress.

The cupcakes there are to DIE for!!

Tales from a Not-So-Perfect Pet Sitter