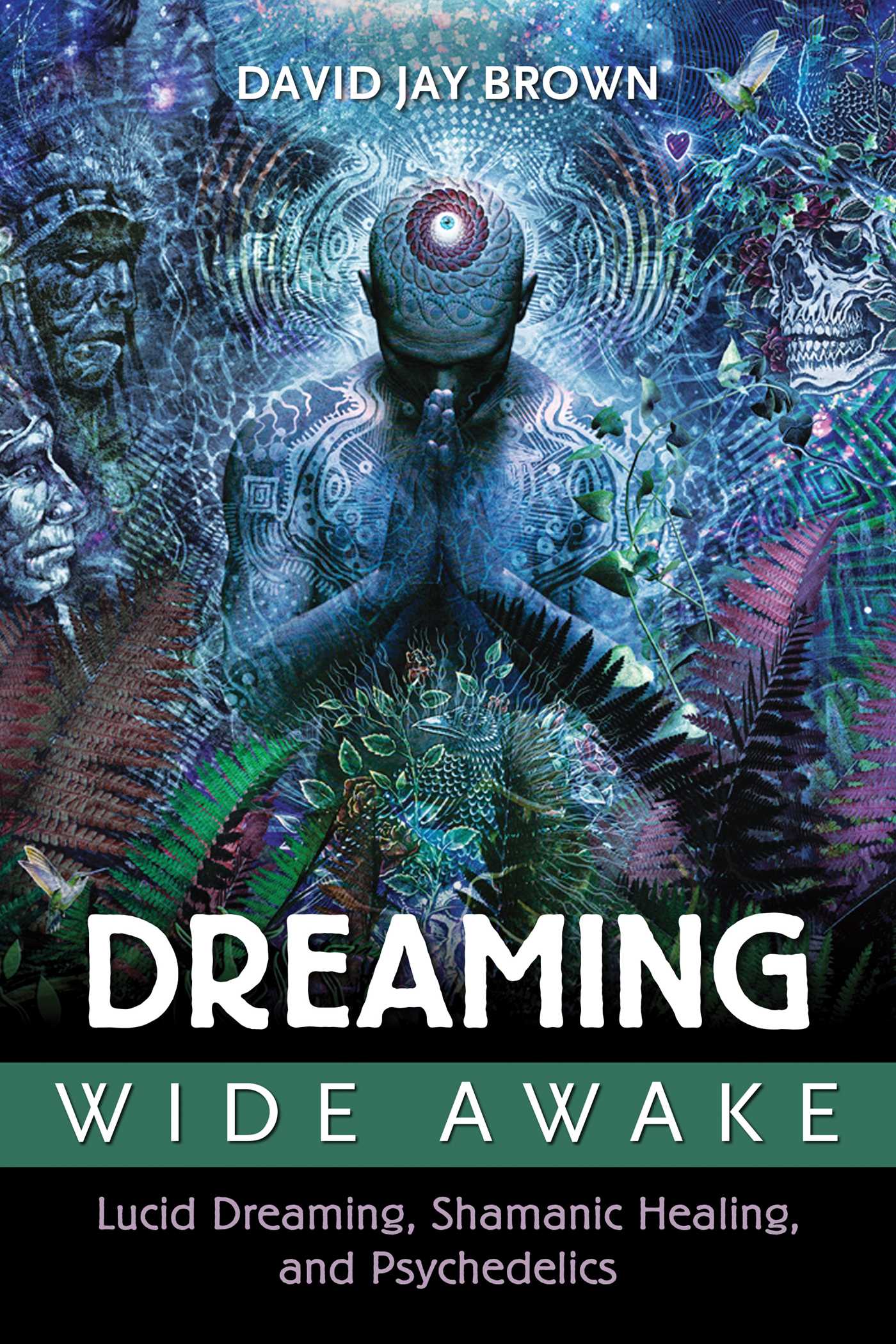 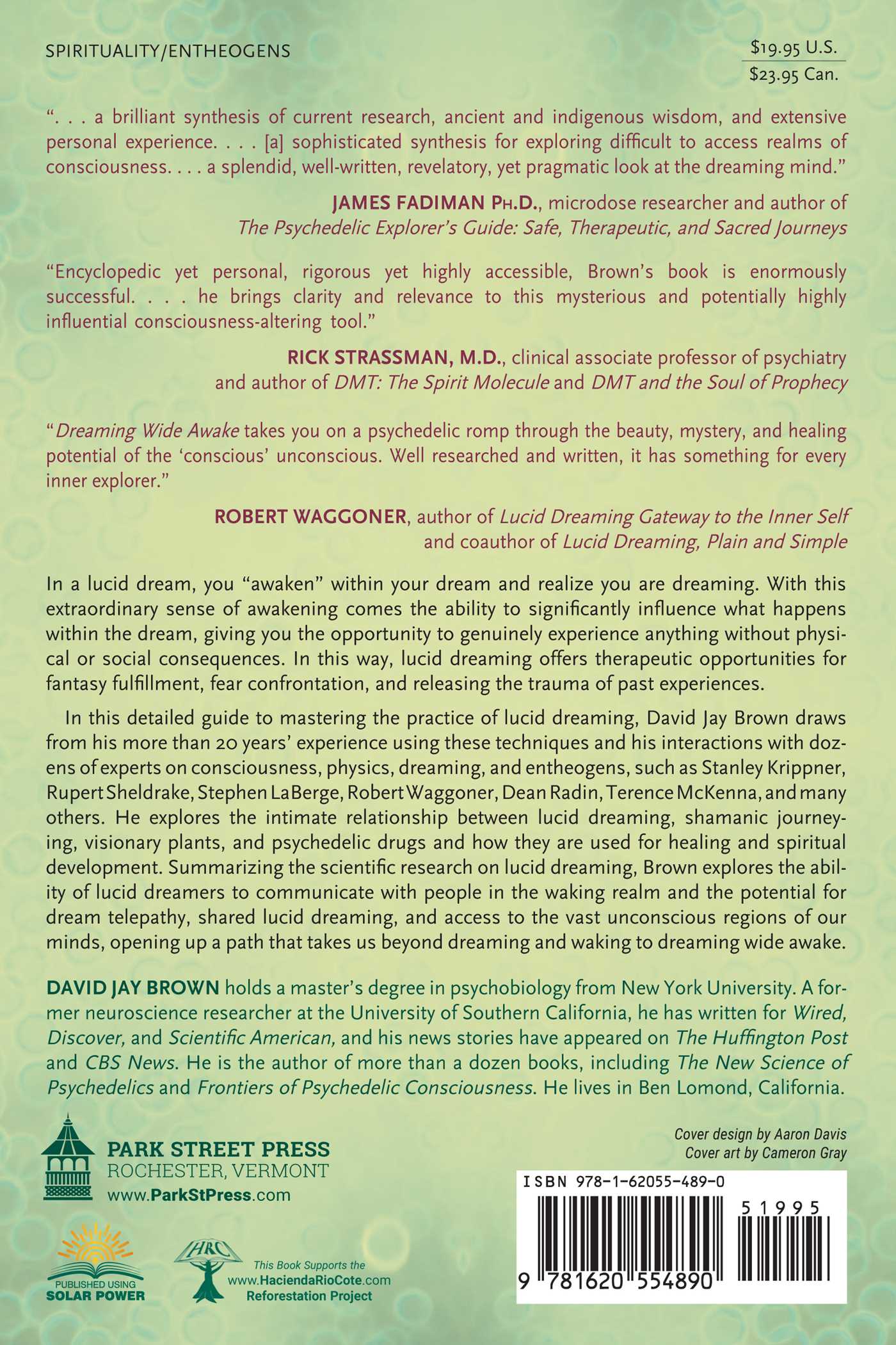 • Explains how to enhance dreaming with supplements, herbs, and psychedelics

In a lucid dream, you “awaken” within your dream and realize you are dreaming. With this extraordinary sense of awakening comes a clear perception of the continuity of self between waking and sleeping and the ability to significantly influence what happens within the dream, giving you the opportunity to genuinely experience anything without physical or social consequences. In this way, lucid dreaming offers therapeutic opportunities for fantasy fulfillment, fear confrontation, and releasing the trauma of past experiences. With development and practice, lucid dreaming can provide a powerful path to greater awareness, heightened creativity, spiritual awakening, and communication with the vast interconnected web of cosmic consciousness.

In this detailed guide to mastering the practice of lucid dreaming, David Jay Brown draws from his more than 20 years’ experience using these techniques and his interactions with dozens of experts on consciousness, physics, dreaming, and entheogens, such as Stanley Krippner, Rupert Sheldrake, Stephen LaBerge, Robert Waggoner, Dean Radin, Terence McKenna, and many others. He explores the intimate relationship between lucid dreaming, shamanic journeying, visionary plants, and psychedelic drugs and how they are used for healing and spiritual development. Offering methods for improving both lucid dreaming and shamanic journeying abilities, he explains how to enhance dreaming with oneirogens, supplements, herbs, and psychedelics and offers techniques for developing superpowers in the dream realm.

Summarizing the scientific research on lucid dreaming, Brown explores the ability of lucid dreamers to communicate with people in the waking realm and the potential for dream telepathy, shared lucid dreaming, and access to the vast unconscious regions of our minds, opening up a path that takes us beyond dreaming and waking to dreaming wide awake.

IMPROVING LUCID DREAMING AND DEVELOPING SUPERPOWERS IN THE DREAM REALM

One way to encourage lucid dreams is to practice the “critical reflection technique,” developed by the late psychologist Paul Tholey. To practice, get into the habit of routinely asking yourself, “Am I dreaming right now?”

The idea behind doing this regularly when we’re awake is that we’ll carry the habit into our dreams, where we will discover that we’re dreaming. However, to know if you’re dreaming it’s important that you test your environment by using one of the following methods.

Read Written Words, Look Away, Look Back, and Read Them Again

An easy test is to simply look at something written on paper, look away, and then look back and see if the same words are still there. In a dream environment, the words will almost always change. Although a dream environment can appear every bit as realistic as waking reality, its fluidity, mutability, and vulnerability to our personal psychic influence is substantial.

Look at Your Hands

There is an interesting connection between looking at one’s hands and achieving lucidity in one’s dreams. There are more neural connections between the hands and the eyes than between any other two parts of the body. It was a revelation for me when I realized that there’s nothing that I see more of in life than the backside of my own hands. I’ve also noticed that people who first try Virtual Reality or LSD often spend time initially just watching their hands and fingers move. It seems that one of the first things that we all do, upon entering a new state of consciousness, or a new level of reality, is to examine our hand-eye connection. More than a few people have mentioned to me that they became lucid after seeing the backside of their hand in dream, so try to let your hands be a constant reminder of dream lucidity.

HACKING REALITY AND TESTING OUT YOUR DREAM-REALM SUPERPOWERS

In a dream, you have the power to do almost anything imaginable, as every physical law can be bent, twisted, and broken, and one has far more control over the experience of reality than we do in the physical world. Here are some of the things that your dream self is capable of doing that you may want to try out the next time that you find yourself lucid in a dream.

The first thing that many people want to do in lucid dreams is to fly. I find that it takes a certain form of concentrated effort to elevate myself, to stay in the air, and to fly. Motions may be necessary at first to convince your mind that it’s possible. Try flapping your arms or swimming through the air, for example. In the dream realm, gravity only exists if you believe it does.

Become a Different Sex or Another Species

With some practice, by closing one’s eyes and willing it, one can completely morph one’s dream body into the opposite sex or any type of animal or mythic creature, and this shape-shifting ability represents another important interface between lucid dreaming and shamanism. Ayahuasca-using shamans are said to be able to shape-shift into jaguars, birds, snakes, and other animals.

Psychokinesis: Moving Objects with Your Mind

One is also able to move any physical object around in a dream by staring at it and willing it to move. I learned about this technique when a dream character looked forcefully at me, and I could feel him knock me over using just the power of his mind. I stood up and wondered if I could do the same thing to him.

I looked at him and imagined him falling over. I could feel a release of energy, and he fell to the ground, seeming quite surprised. Ever since then, I’ve been able to move objects around with just my focused attention.

I’ve found that I can have out-of-the-dream-body experiences simply by willing it. I can float out of my dream body as a “spirit” in my lucid dreams. My floating spirit is then able to enter into and temporarily fuse with other people or things in the dream, and I see the world from his, her, or its perspective. When doing this, I find that although my vantage point shifts, my basic sense of self remains the same.

THE POWER OF BELIEF IN DREAMING

The secret to a successful development with lucid dreaming is to understand that whatever you believe to be real is what becomes real. Reality conforms to our beliefs. This is obvious in a lucid dream, but this truth stays generally hidden during waking consciousness, except when we are having a psychedelic experience.

It seems there’s a continuum of consciousness between waking and dreaming, and psychedelic awareness lies somewhere in the middle. I’ve often wondered if what the “spirit of ayahuasca” said to me once on a shamanic journey is true or not. The voice said that anything possible in a lucid dream is also possible in waking reality, because both realities exist within our minds. Is this what religious prophets, enlightened mystics, and super-psychics have realized?

David Jay Brown holds a master’s degree in psychobiology from New York University. A former neuroscience researcher at the University of Southern California, he has written for Wired, Discover, and Scientific American, and his news stories have appeared on The Huffington Post and CBS News. A frequent guest editor of the MAPS Bulletin, he is the author of more than a dozen books, including The New Science of Psychedelics and Frontiers of Psychedelic Consciousness. He lives in Ben Lomond, California.

“David Jay Brown’s book is a brilliant synthesis of current research, ancient and indigenous wisdom, and extensive personal experience. Based on a wealth of hard data, historical research, and dream diaries, Brown deftly ties together not only lucid dreams but also similar events from other altered states. While the book centers on lucid dreams, it incorporates parallel experiences in psychedelic use and shamanism, giving us, perhaps, the first sophisticated synthesis for exploring difficult to access realms of consciousness. Filled with practical and doable suggestions on how to enhance lucid dreaming and how to maximize its healing effects, Dreaming Wide Awake is a splendid, well-written, revelatory, yet pragmatic look at the dreaming mind.”

“Encyclopedic yet personal, rigorous yet highly accessible, Brown’s book is enormously successful. The author covers every conceivable theoretical and practical aspect of lucid dreaming: from neuroscience to shamanism, anthropology to the occult, ethnobotany to telepathy, the electronic to the pharmacologic. In so doing, he brings clarity and relevance to this mysterious and potentially highly influential consciousness-altering tool.”

“Dreaming Wide Awake takes you on a psychedelic romp through the beauty, mystery, and healing potential of the ‘conscious’ unconscious. Well researched and written, it has something for every inner explorer.”

“For millennia, many tribal shamans have used lucid dreaming and psychedelic plants to obtain information that they have used in helping and healing members of their community. In this groundbreaking book, David Jay Brown has brought together findings from contemporary science to demonstrate the similarity between these two types of altered consciousness and how the insights they provide can help alleviate nightmares, restore health, hasten recovery from injuries, and even yield creative insights. Dreaming Wide Awake may evoke a new field of research, both experimental and applied, that will enhance human potentials in ways that have been too long neglected.”

– Stanley Krippner, Ph.D., coauthor of Extraordinary Dreams and How to Work with Them

“With his customary precision and style, David Jay Brown illuminates the dreamtime . . . and he tells you how you can work and play in that dream space. An important book for true dreamers.”

– R. U. Sirius, musician, digital culture iconoclast, and author of Transcendence: The Disinformation

“Kapow. Brown’s Dreaming Wide Awake connects the multidimensional dots that are strewn throughout the tiered cosmos. He goes far and deep into the mysteries of the dreaming mind and, even more impressively, does this with his feet planted on the ground and armed with a skeptical but compassionate outlook.”

– Ryan Hurd, coeditor of Lucid Dreaming: New Perspectives on Consciousness in Sleep and author of Drea

“A fascinating read. With curiosity and heart, David Jay Brown invites the reader to explore a unique fusion of shamanism, psychedelics, and lucid dreaming. Watch the doors between the worlds swing open!”

– Clare Johnson, Ph.D., author of Breathing in Colour and Dreamrunner