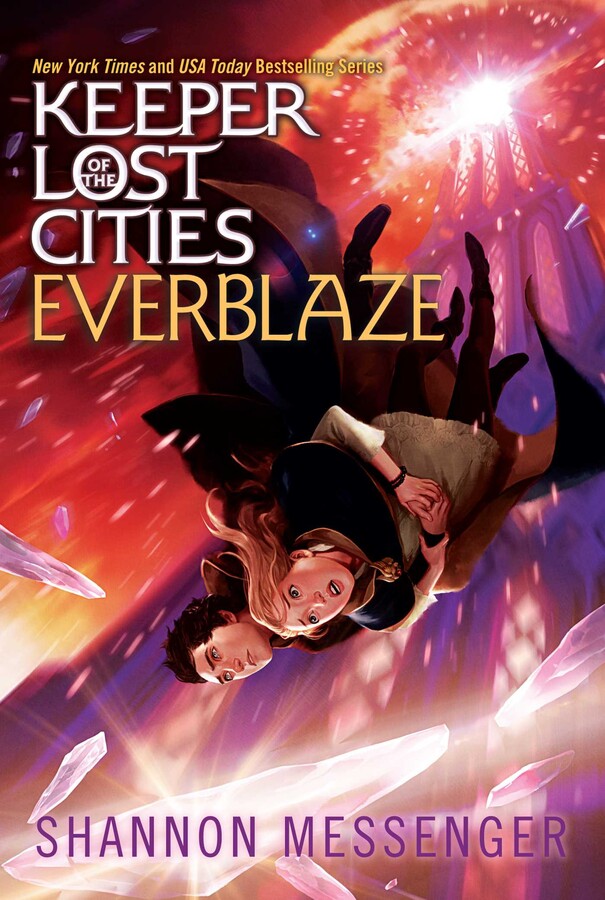 Sophie Foster is ready to fight back.

Her talents are getting stronger, and with the elusive Black Swan group ignoring her calls for help, she’s determined to find her kidnappers—before they come after her again.

But a daring mistake leaves her world teetering on the edge of war, and causes many to fear that she has finally gone too far. And the deeper Sophie searches, the farther the conspiracy stretches, proving that her most dangerous enemy might be closer than she realizes.

In this nail-biting third book in the Keeper of the Lost Cities series, Sophie must fight the flames of rebellion, before they destroy everyone and everything she loves.

WHAT ARE YOU WAITING FOR?” Keefe shouted over the howling wind and the roaring sea. “Don’t tell me the great Sophie Foster is afraid.”

Not that she could fool him.

As an Empath, Keefe could feel the terror coursing through her veins like a herd of stampeding mastodons. All she could do was tug out an itchy eyelash—her nervous habit—and try not to think about how very far down the ocean was.

“You should be afraid,” Sandor told her in his strange, squeaky voice. He placed a gray gobliny hand on Sophie’s shoulder and pulled her back from the edge of the cliff. “There has to be a safer way to teleport.”

Most of the time Sophie was grateful to have the constant protection of a burly bodyguard—especially since her kidnappers had proven they could find her anytime, anywhere.

But sometimes she had to take risks.

She shrugged off Sandor’s hand—which took quite a lot of effort, considering he was seven feet tall with biceps like giant boulders—and inched forward, reminding herself that she liked teleporting better than light leaping. Despite the nexuses she had clamped on each wrist, or the force fields they created to hold her body together during a leap, she’d faded too many times to truly feel safe.

Still, she wished free-falling wasn’t an essential part of teleporting.

“Want me to push you?” Keefe offered, laughing as Sophie jerked away from him. “Come on, it’ll be fun—for me, at least.”

Dex snorted behind them. “And he gets to go with you today.”

“Uh, more like she gets to go with me,” Keefe corrected, flashing his trademark smirk. “Go on, tell Dex who the Council contacted first.”

“Only because your dad’s in charge of arranging visits to the Sanctuary now,” Sophie reminded him.

“Eh, firsties is still firsties. Just admit it, Foster. You need me.”

Sophie wished she could argue, but unfortunately the Council did want Keefe to go with her. Apparently Silveny was having some sort of trouble at her new home in the elves’ special animal preserve, and since Sophie and Keefe each had a connection with the precious alicorn, the Council had asked both of them to head to the Sanctuary immediately.

The Councillors had to be pretty concerned if they were willing to rely on Keefe. . . .

Dex smiled—but not enough to show his dimples—as he went back to playing with the lock she’d asked him to open.

Sophie hadn’t wanted to tell him she was going with Keefe, afraid it would make Dex feel left out again. But with Grady off on a classified assignment, and Edaline helping rescue a verminion—a rottweiler-size, purple, hamsteresque creature—before humans found it, Sophie needed a Technopath to get past the Cliffside gate.

“If it makes you feel better, Sandor’s not allowed to come either,” she added, regretting the words as Sandor reeled on them.

“Yes, and it’s completely absurd! I’m supposed to be protecting you—not banned from entering because of arbitrary new rules!’”

“Hey, even my dad’s not allowed to go with us. But don’t worry”—Keefe draped an arm across Sophie’s shoulders—“I’ll take care of her for you.”

Sophie wasn’t sure who groaned louder, her or Dex.

Sandor grabbed Keefe’s shoulders, lifting him off the ground. “If I find even one scratch on her—”

“Whoa, easy there, Gigantor,” Keefe said, kicking the air, trying to squirm free. “I’m not going to let anything happen to her. But let’s not forget that this is Sophie we’re talking about. Odds are, we’re going to need an Elwin visit.”

Even Dex had to laugh at that one.

Sophie glared at all of them.

It wasn’t her fault she’d set a record number of visits to the Healing Center at school, plus a ton of additional house calls from Elwin. She didn’t choose to have a deadly allergy, or genetically enhanced abilities she couldn’t always control. And she definitely didn’t ask to have a group of rebels trying to kill her—which was probably why she should listen to Sandor and not leave his sight.

“We’ll be fine,” she promised, tucking her blond hair behind her ears and trying to sound more confident than she felt. “I can teleport us directly inside the Sanctuary, and security’s been tripled since Silveny moved in.”

“And you will come straight home afterward,” Sandor added, waiting for Keefe to nod before setting him down. “I want you back here in an hour.”

“Aw, come on,” Keefe whined as he adjusted his dark blue cape. “We haven’t seen Silveny in two weeks.”

She never would’ve guessed that Keefe could get so attached to a sparkly, winged horse. But he seemed to miss Silveny as much as she did. Maybe more, since he didn’t get stuck with a head full of exuberant alicorn transmissions every time he saw her.

Silveny was the only creature that Sophie’s unique telepathy couldn’t block, probably because the Black Swan had modeled Sophie’s genetics off an alicorn’s DNA when they “created” her—a fact she was less than thrilled about. Her friends had assured her they didn’t think it was weird, but she still felt like “the horse girl.”

“You know how panicky Silveny can be,” she reminded Sandor, trying to stay focused on the bigger problem. “It’s going to take a few hours to calm her down.”

Sandor grumbled under his breath. “Fine. You have until sunset—but if you’re late, I’m holding you responsible, Mr. Sencen. And trust me when I say you do not want that to happen.”

“Fear the wrath of Gigantor—got it.” Keefe dragged Sophie back to the edge. “Let’s do this!”

“I guess I’ll see you at school on Monday,” Dex mumbled, staring at the ground as he dug out his home crystal. “I reset the mechanism to make the lock open with your DNA, so you probably won’t need me anymore.”

“And dude, I’m telling you,” Keefe jumped in. “When you’re finally ready to go public with your ability—which you seriously need to get cracking on, by the way—we have to team up. We could break into Dame Alina’s office and fill it with dinosaur poop. Or sparkly alicorn poop! Or we could—”

“And this is who you’re entrusting your safety to?” Sandor interrupted, looking like he wanted to strangle Keefe again.

“I can take care of myself,” Sophie reminded him, tapping her forehead. “Inflictor, remember?”

She might have mixed feelings about her rare ability to inflict pain on people, but it did come in handy if the rebels attacked.

“So we ready?” Keefe asked, swooping his arm to mime them diving off the edge.

“You got this, Foster. Stop doubting yourself.”

She nodded, trying not to look down as she asked, “Do you remember how teleporting works?”

“Well, last time we were kinda falling to our death and stuff, so it’s a little blurry. But I’m pretty sure I just cling to you and scream like a banshee while you tear a crack into the universe, right?”

Sandor repeated his objections as they both bent their knees.

She gave herself just slightly longer than a second before she closed her eyes and whispered the final command.

The word was still on her lips as they both launched off the cliff.

Keefe whooped and hollered and flailed, but Sophie stayed quiet, trying to tune out everything except the warmth building in her mind and the adrenaline rushing through her veins.

Down down down they fell, until Sophie could feel the salty mist spraying her cheeks. But just when she was about to scream, something clicked inside her mind, and she channeled the burning mental energy out into the sky.

Thunder clapped as a crack formed in the air beneath them, and they dropped straight into the darkness.

Time and space didn’t exist in the void. There was no up or down. No right or left. Just the pull of the force and the warmth of Keefe’s hand. But Sophie knew that all she had to do was think about where she wanted to go and they’d be free.

The Sanctuary, she thought, picturing the lush meadows and sprawling forests she’d seen in pictures. Her photographic memory could recall every vivid detail, right down to the tiny drops of mist that coated every petal and leaf, sparkling like glitter in the sun.

“You with me, Foster?” Keefe called, when no exit appeared.

She squeezed her eyes tighter, picturing the hollowed out mountains that shielded the Sanctuary from the rest of the world, and the animals in every shape and color wandering through the pastures. She even tried imagining herself standing with Keefe in a meadow, watching Silveny soar above them with gleaming silver wings.

But when she opened her eyes, all she saw was black—thick and suffocating and inescapable.

Panic closed off her chest and Sophie gasped for breath, fighting to concentrate on the Sanctuary with the full power of her mind.

A migraine flared, so intense it felt like her brain was cracking. But the pain wasn’t nearly as terrifying as the realization that came with it.

They were trapped in the void. 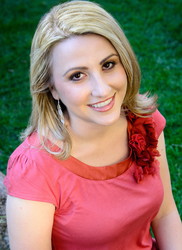 Shannon Messenger graduated from the USC School of Cinematic Arts, where she learned—among other things—that she liked watching movies much better than making them. She’s studied art, screenwriting, and film production, but she realized her real passion was writing stories for children. She’s the New York Times and USA TODAY bestselling author of the award-winning middle grade series, Keeper of the Lost Cities, as well as the Sky Fall series for young adults. Her books have been featured on multiple state reading lists, published in numerous countries, and translated into many different languages. She lives in Southern California with an embarrassing number of cats. Find her online at ShannonMessenger.com.