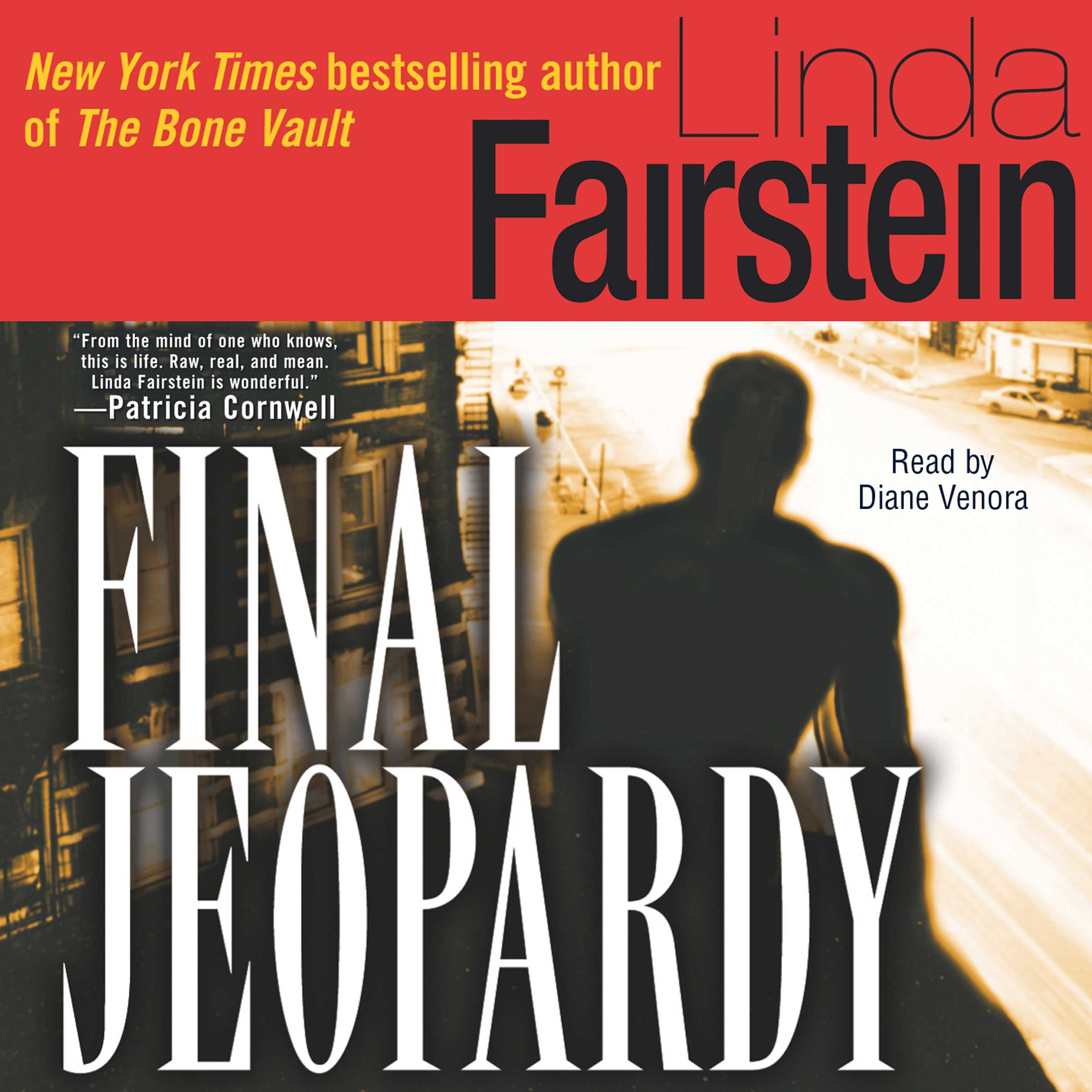 From the former chief of the sex crimes unit of the Manhattan District Attorney’s office comes the bestselling thriller featuring a New York City prosecutor unraveling a terrifying and brutal murder mystery.

Alexandra Cooper, Manhattan’s top sex crimes prosecutor, awakens one morning to shocking news: a tabloid headline announcing her own violent murder. Confused and horrified, Alex discovers that the actual victim was Isabella Lascar, a Hollywood film actress who was staying at Alex’s Martha’s Vineyard retreat. This only raises more questions: was Isabella slain by a stalker or was Alex herself the intended target?

In an investigation that twists from the alleys of lower Manhattan to the chic boutiques of the Upper East Side, Alex has to get inside the killer’s head before the killer gets to her. “With riveting authenticity” (Vanity Fair), Final Jeopardy is a fast-paced and explosive thriller that only Linda Fairstein could write.

Questions and Topics For Discussion

1.      What unique perspective does Linda Fairstein’s background—head of the Sex Crimes Unit of the Manhattan District Attorney’s Office—allow her to bring to her novel?  How much of the author do you think there is in Alexandra Cooper?

2.      How would you describe Alex?  What are her strengths and weaknesses?  Is her professional persona at all different from her private one?

3.      This novel blends a classic whodunit with multiple other story lines. While involved with Isabella Lascar’s murder, for instance, Alex is also trying to bring a serial rapist to justice and is helping her staff try a number of other cases.  Did you like the way that the various stories were woven together?

4.      What roles do Mike Chapman and Mercer Wallace play in Alex’s life?  What do they have in common with each other, and what makes each unique?

5.      Did Isabella Lascar remind you of anyone in particular?  Had you mentally cast a particular movie star in the role?

6.      FINAL JEOPARDY feels strikingly realistic.  The scene in which men are selected for a line-up, for instance, offers a memorably authentic view of the day-to-day workings of police department.  Did other, similar details stand out for you?  Did you learn anything new in this novel?

7.      Why is Martha’s Vineyard such an important place for Alex?  Why is it a significant setting for Isabella’s murder—both for Alex and for the story as a whole?

8.      Alex admits that her mother doesn’t understand how she is able to do her job and sleep at night.  How do you think this constant backdrop of sexual violence affects her?  What kind of tone does it give this story?

9.      Despite the fact that Isabella was killed in front of Alex’s home and that they were physically similar, Alex refuses to believe that she is in danger.  And when she starts receiving strange phone calls at home, she does nothing.  Why do you think that she doesn’t take these personal threats that seriously?

10.  On page 53, Alex explains why her job is so important and satisfying to her, despite the disturbing cases she’s surrounded by every day.  What kind of person does it take to do that job?  Do you think that you would be able to do it?

11.  Alex is single and doesn’t live close to her family, but she has an impressive support system of friends and colleagues.  Who are the key people in her life and how are each of them important to her?

12.  Years earlier, Alex’s fiancé, Adam, was killed in an accident just before their wedding.  How do you think Adam’s death continues to affect her?

13.  This novel—and Alex’s life—is largely dominated by accounts of men’s violence against women.  How did learning the killer’s identity, then, stack up with your expectations?
Linda Fairstein
Diane Venora

More books in this series: An Alexandra Cooper Novel