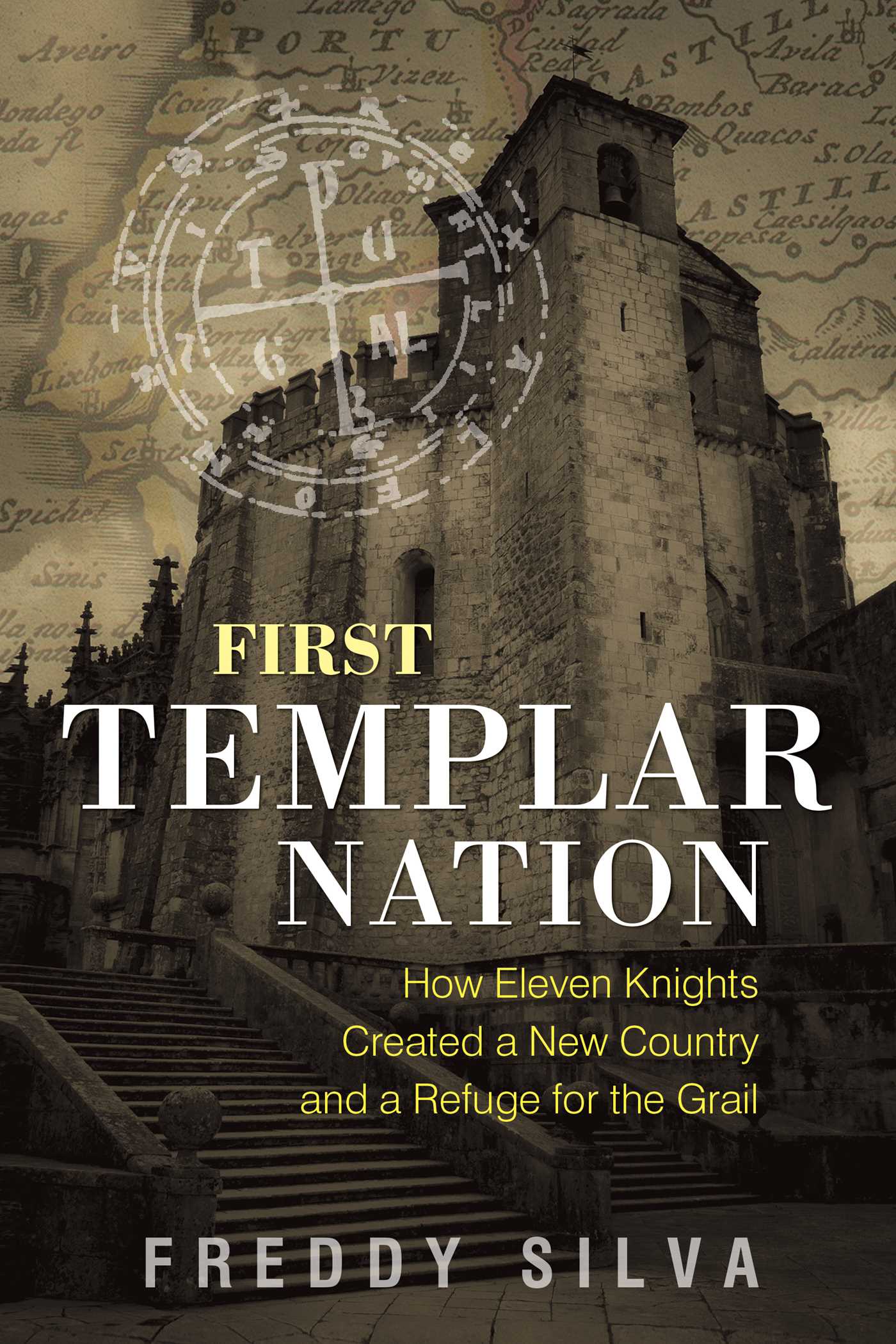 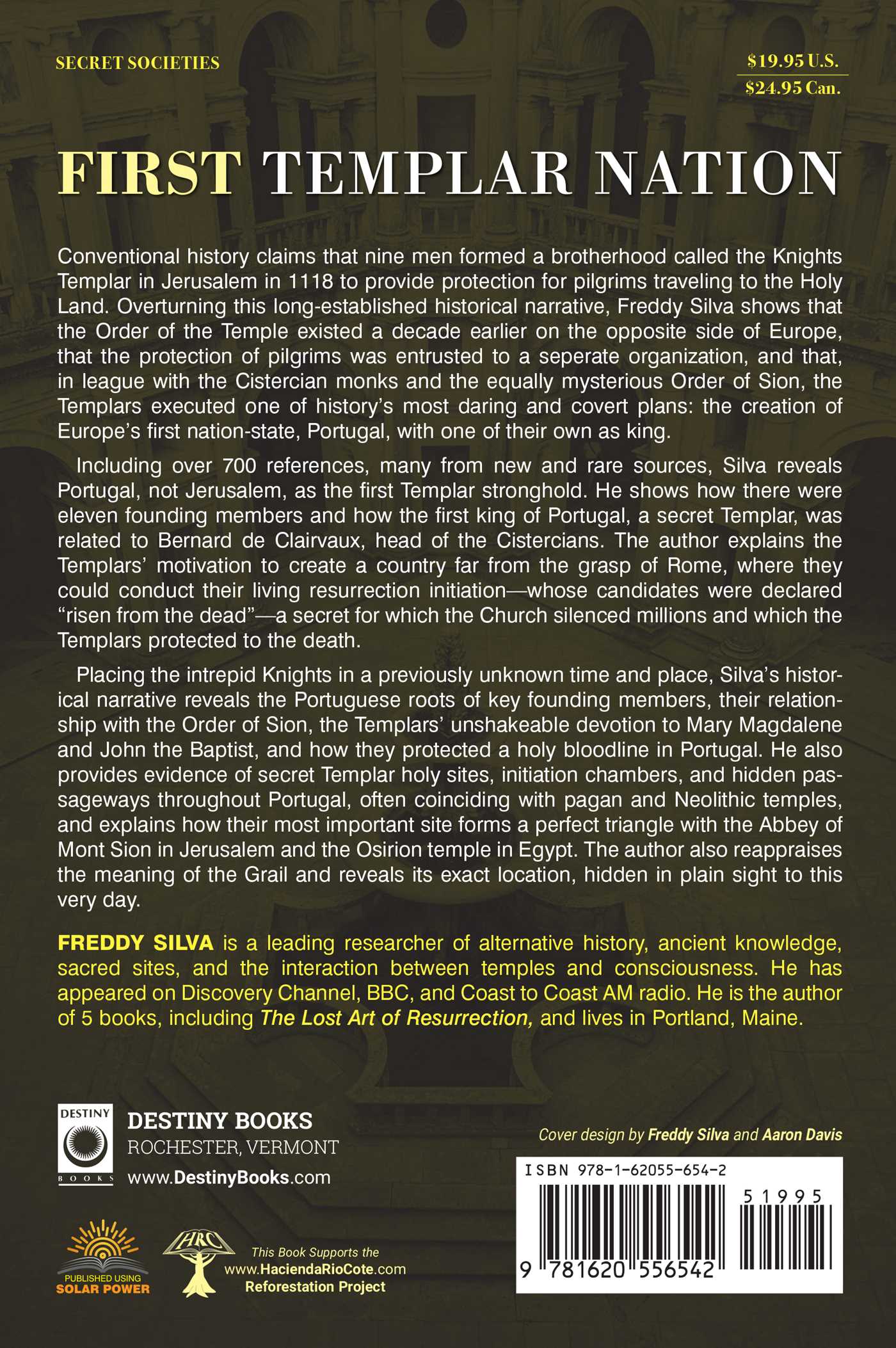 • Explains how and why the Templars created Europe’s first nation-state, Portugal, with one of their own as king

• Reveals the Portuguese roots of key founding members, their relationship with the Order of Sion, the Templars’ devotion to Mary Magdalene and John the Baptist, and the meaning and exact location of the Grail

• Includes over 700 references, many from new and rare sources

Conventional history claims that nine men formed a brotherhood called the Knights Templar in Jerusalem in 1118 to provide protection for pilgrims traveling to the Holy Land. Overturning this long-established historical narrative, Freddy Silva shows that the Order of the Temple existed a decade earlier on the opposite side of Europe, that the protection of pilgrims was entrusted to a separate organization, and that, in league with the Cistercian monks and the equally mysterious Order of Sion, the Templars executed one of history’s most daring and covert plans: the creation of Europe’s first nation-state, Portugal, with one of their own as king.

Including over 700 references, many from new and rare sources, Silva reveals Portugal, not Jerusalem, as the first Templar stronghold. He shows how there were eleven founding members and how the first king of Portugal, a secret Templar, was related to Bernard de Clairvaux, head of the Cistercians. The author explains the Templars’ motivation to create a country far from the grasp of Rome, where they could conduct their living resurrection initiation--whose candidates were declared “risen from the dead”--a secret for which the Church silenced millions and which the Templars protected to the death.

Placing the intrepid Knights in a previously unknown time and place, Silva’s historical narrative reveals the Portuguese roots of key founding members, their relationship with the Order of Sion, the Templars’ unshakeable devotion to Mary Magdalene and John the Baptist, and how they protected a holy bloodline in Portugal. He also provides evidence of secret Templar holy sites, initiation chambers, and hidden passageways throughout Portugal, often coinciding with pagan and Neolithic temples, and explains how their most important site forms a perfect triangle with the Abbey of Mont Sion in Jerusalem and the Osirion temple in Egypt. The author also reappraises the meaning of the Grail and reveals its exact location, hidden in plain sight to this very day.

Master Gualdino laid the cornerstone of the round church the Templars would spend the next two years erecting. By its very location on a mound atop the hill, the rotunda would be the first element of the surrounding terrain to be bathed by the light of the rising sun. The timing of the ceremony embodied the ancient Egyptian practice of performing the rite of resurrection at dawn.

The event also marked the fortieth anniversary of the founding of the first Cistercian monastery in Portugale, at Tarouca, after the Templar knight Brother Roland and a group of monks from Clairvaux met with a young Afonso Henriques.

The rotunda’s octagonal geometry would be an homage to both the church of the Holy Sepulcher and Arabic sacred architecture; its interior was devoid of all ornament, precisely as Bernard de Clairvaux prescribed: “There must be no decoration, only proportion.”1

During this period the Templars undertook no other project. It was a singular focus, a great work, a total and synergistic enterprise as though integral to their purpose. Only after the rotunda was complete did they focus on Thamar and the attention the town obviously needed.

The town was practically rebuilt from scratch, requiring the import of vast quantities of artists and stonemasons, and in the decade that followed, the Templars devoted their entire efforts to its resurrection.2 It was to become their headquarters in Portugal, the portal of the Order, containing perhaps the most significant Templar monuments in Europe.

POR TU, O GRAL. “Through you, the Grail.” The same phrase inscribed beside the image of the Ark of the Covenant on the Doorway of Initiates at Chartres Cathedral. Could the castle on the hill above Thamar be the same “castle of the wild mount” described in the Graal legend? Whether by coincidence or design, just as Gualdino’s ceremony is taking place in Thamar, Cretien of Troyes is settling down to write his Graal story in Champagne.

The origin behind the naming of Thamar is as intriguing as the reason why the Templars should have chosen a spot so far removed from their original homeland to give birth to their golden age. Thamara or Tamarmah was the name given by its Arab habitants around the ninth century,4 and its choice shines some light on why the location was important beyond the site of a former Benedictine monastery where a divine virgin was martyred.

Tamar or Tamara was the name of King David’s daughter,5 just as it was the daughter of the union between Jesus and Mary Magdalene.6 The name means “palm tree,” and to anyone acquainted with esoteric symbolism this has a profound connection with the cult of raising the dead.
It has already been noted just how many of the Templar’s pursuits have decidedly esoteric or ancient Egyptian overtones. One of the central pillars of the Egyptian Mysteries schools is the resurrection myth featuring Osiris and his consort Isis. Osiris ruled the kingdom until his jealous brother Set cut him into little pieces and unceremoniously dispersed them into the Nile. Because Osiris produced no heir, Isis was left with no son to dispose of the evil Set. In effect she was the divine virgin presiding over a kingdom gone to ruin. Resourceful to the end, Isis sets off to gather up her husband’s body parts, magically reassembles them, and after fashioning him a new phallus made of solid gold she uses the sound of her voice, whereupon Osiris is resurrected and Isis impregnated.

After his ordeal Osiris shines forever as a bright star and returns to restore life to a barren land. The myth essentially outlines the ritual of living resurrection, and the symbol of Osiris’s experience is the palm tree. Osiris himself is depicted with green skin, making him the oldest expression of the cult of the Green Man, the tutelary deity of fertility who revitalizes the land and raises it from the dead.

It seems Osiris was a dab hand at magic, perhaps because the priest-god who assists him in the ritual is the ibis-headed Djehuti (the Greek Thoth-Hermes), who is credited “as the author of every branch of knowledge, both human and divine.”7 Djehuti is nothing less than the personification of the mind of God, a skin-and-bones representation of the stone tablets written by God. Djehuti’s knowledge descended from heaven from the god Amun, whose image is depicted on temple walls wearing a crown of two tablets, suspiciously identical in shape to those handed to Moses.

After the Templars recovered the knowledge secreted beneath the Temple Mount, they swore to “rebuild the temple,” physically and symbolically. This they did by specifically selecting Thamar, in the land of Ceras, a lifeless piece of land they held out for after a lengthy controversy with the Bishop of Lisbon. And now we know why.

The crowning of the hill with a round church gave it the appearance of Mount Sion and its curved basilica, the location where the Essenes once performed their secret ministries. If the Templars aimed to re-create the essence of Mount Sion, did they also re-create the rites of resurrection? For one thing, the unusual structure above Tomar was never a church to begin with; it never contained an altar inside or adjacent to it.8 And why should the Templars require a second place of worship when they already had the nearby church of Santa Maria do Olival, where their prayers and sacred offices were conducted on a daily basis?

Even more curious, during sieges, the people of Thamar were never permitted inside the rotunda, arguably the safest, most secure building inside the citadel. And had they been allowed, getting inside would have proved awkward, for this rotunda had no door.9
Freddy Silva

“In this well-told story, author Freddy Silva has filled a long-standing need for a real understanding of the Templars’ early history, their search for treasure in the Temple of Solomon, and the creation of an independent Portugal with a Templar knight as king. First Templar Nation is a fascinating contribution to the body of knowledge of the Order.”

– Steven Sora, author of The Lost Treasure of the Knights Templar