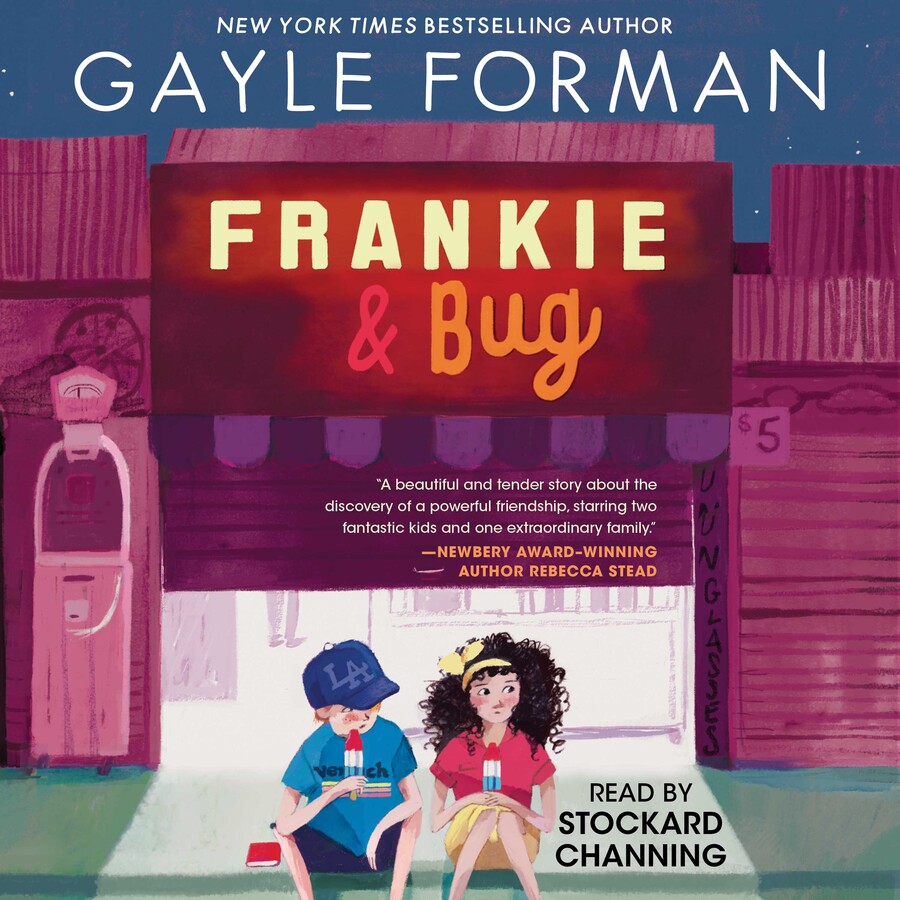 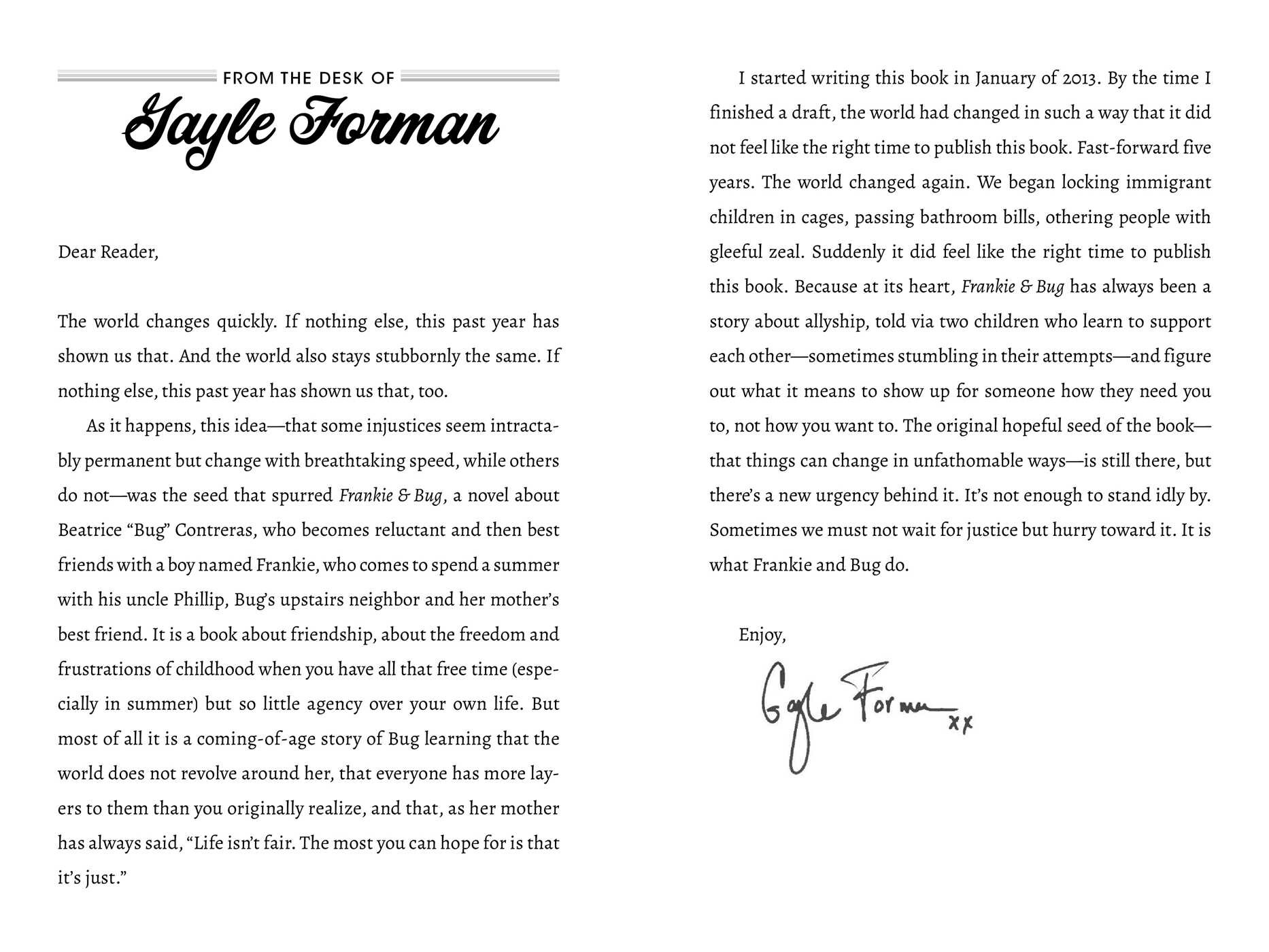 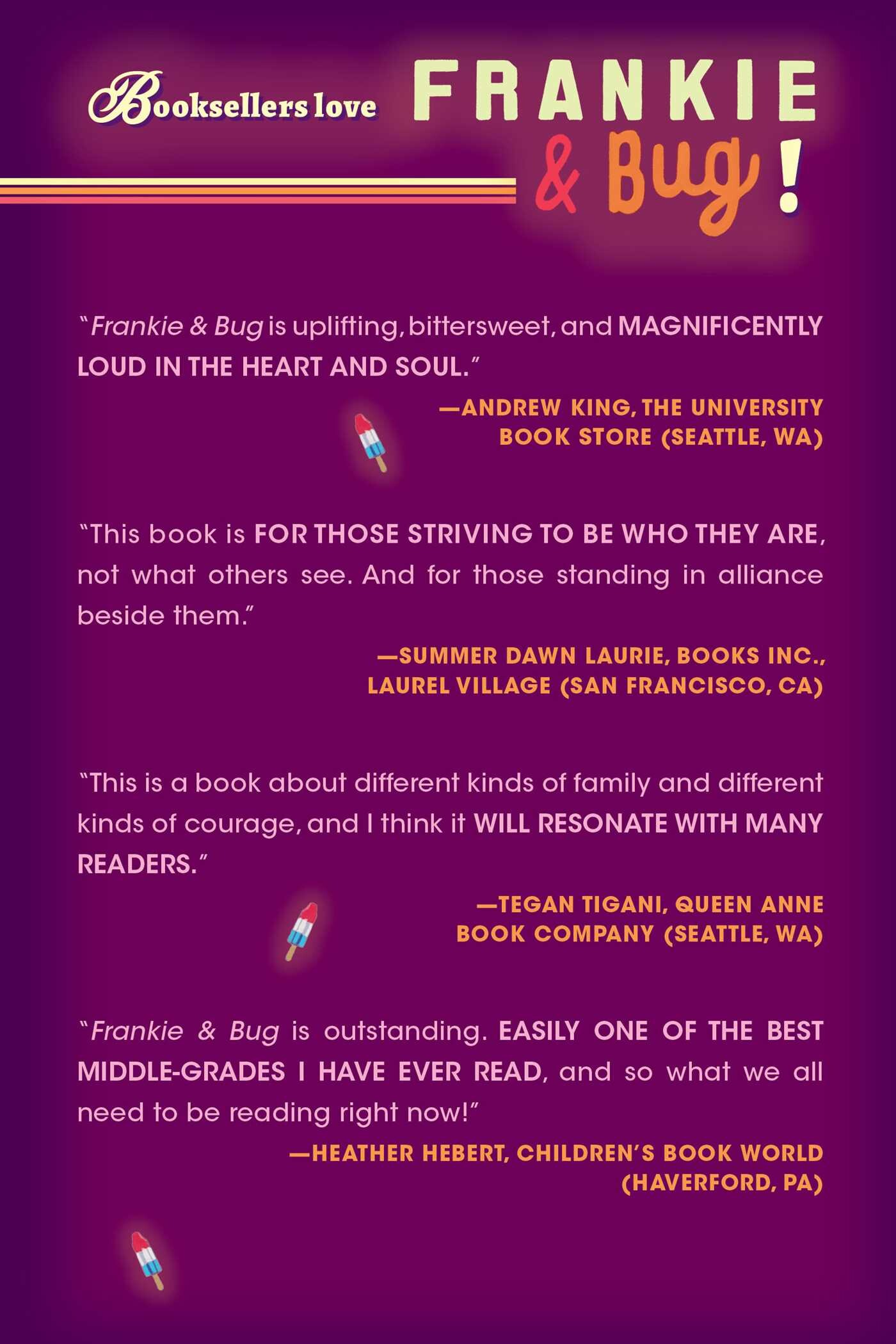 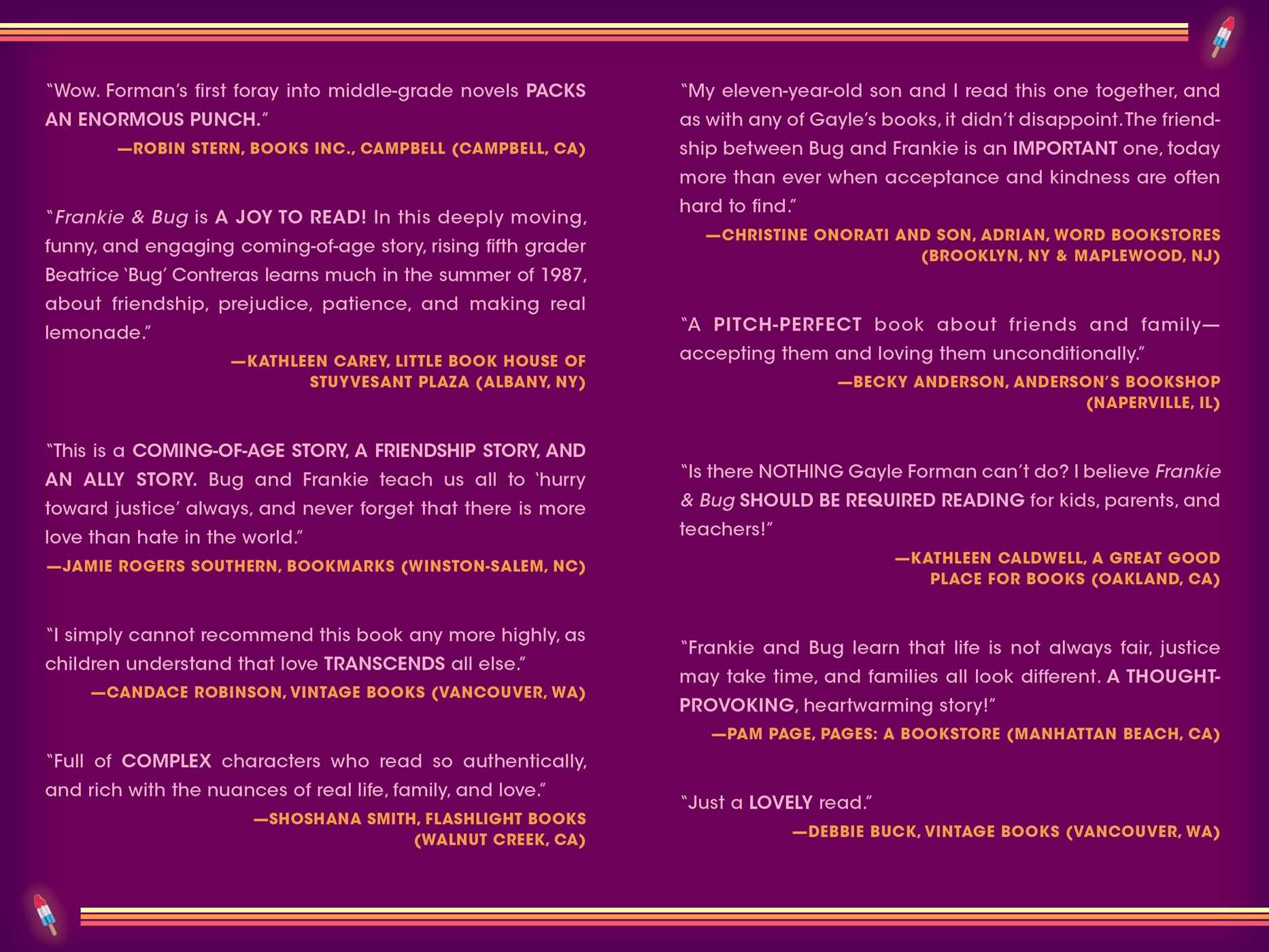 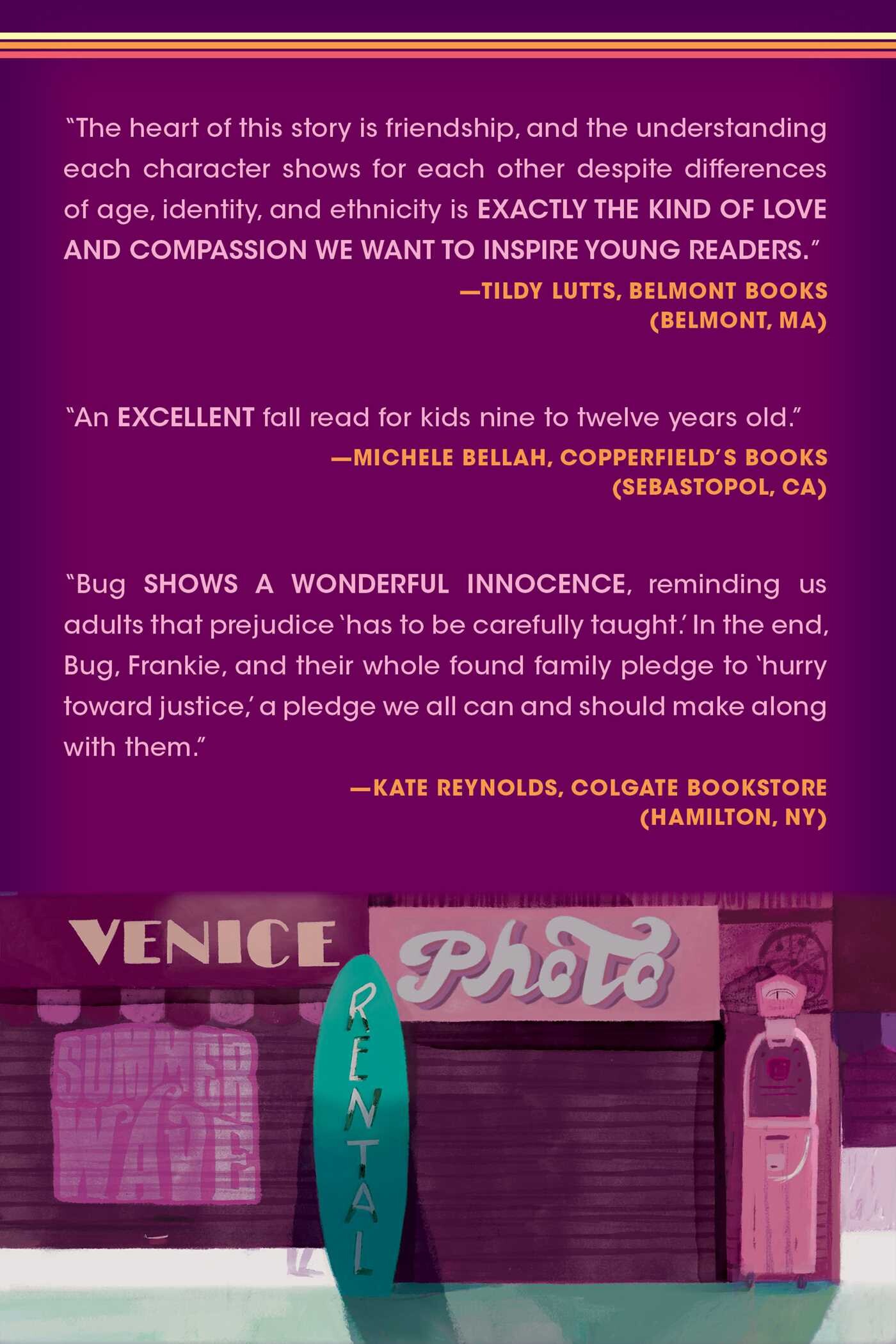 In the debut middle grade novel from #1 New York Times bestselling author Gayle Forman comes a poignant and powerful coming-of-age story that follows a young girl and her new friend as they learn about family, friendship, allyship, and finding your way in a complicated world.

It’s the summer of 1987, and all ten-year-old Bug wants to do is go to the beach with her older brother and hang out with the locals on the boardwalk. But Danny wants to be with his own friends, and Bug’s mom is too busy, so Bug is stuck with their neighbor Philip’s nephew, Frankie.

Bug’s not too excited about hanging out with a kid she’s never met, but they soon find some common ground. And as the summer unfolds, they find themselves learning some important lessons about each other, and the world.

Like what it means to be your true self and how to be a good ally for others. That family can be the people you’re related to, but also the people you choose to have around you. And that even though life isn’t always fair, we can all do our part to make it more just.

By clicking 'Sign me up' I acknowledge that I have read and agree to the privacy policy and terms of use. Free ebook offer available to NEW US subscribers only. Offer redeemable at Simon & Schuster's ebook fulfillment partner. Must redeem within 90 days. See full terms and conditions and this month's choices.
Reading Group Guide for

Bug is facing a bleak summer in seaside California. Her older brother no longer wants to go to the beach with her, which is Bug’s absolutely favorite thing. Instead she’ll have to hang out with Hedvig, their eccentric downstairs neighbor, or with Frankie, who’s from Ohio and visiting his uncle, Phillip, who lives upstairs. Phillip is like family to Bug, and she doesn’t want to share him with a stranger. But then Bug and Frankie bond by investigating the Midnight Marauder, a criminal attacking people around Los Angeles. And although the new friends don’t solve that particular crime, Bug discovers secrets closer to home, including one about her family and another about Frankie that show her the world is more complex than she ever expected.

1. Discuss the opening line, “Ten days before school let out, Mama announced that summer was canceled.” In what ways is this an exaggeration? What’s going to change about Bug’s usual summer plans that she’s unhappy about? What do the first two pages tell you about Bug and her mother?

2. Relate the opening line and Bug’s reaction to Mama’s repeated comment that “Life isn’t fair—the most you can hope for is that it’s just.” What’s the difference between fairness and justice? Where else does this theme arise in the novel?

4. Why does Bug believe Frankie has come from Ohio for Bug’s sake? What is her initial reaction to him? Why did he really come? When does she realize those reasons, and how does she react?

5. Who is the Midnight Marauder? How does the search for the Midnight Marauder bring Bug and Frankie together? What do they believe about Hermit House, and why do they feel that way? How do they approach their investigation? How does it change Bug’s view of Frankie? Explain your answers using examples from the book.

6. Describe Phillip and his role in Bug’s life. Why does she like him so much? How does he treat her? Why hasn’t Frankie met his uncle until now?

7. What is Daniel like? Why does he want to be called Daniel instead of Danny? Why doesn’t Bug call him Daniel, despite his request? Do you agree or disagree with Bug’s choice? Why is Daniel trying to be more like his father?

8. How has Bug and Daniel’s relationship changed recently? Why does Bug feel like Daniel has rejected her? What would she like him to do for her? What does he do instead?

9. What do you learn about Venice, California? What makes it an unusual place to live? In what ways is the setting important to the story? What are some clues that the story doesn’t take place today? When do you find out that it’s 1987?

10. Describe Hedvig’s interests and appearance when she first appears in the story. What is Bug’s attitude toward Hedvig? What is Hedvig’s story about her past? How does the story change Bug’s view of her?

11. Why does Disneyland represent freedom to Hedvig? Why does Hedvig tell Mama and Phillip that they “both understand what it means to be a refugee”?

12. Discuss the following description of Mama, and explain why she doesn’t talk about Bug’s father or grandparents. “If she got sad when Bug asked about her father, she went blank when Bug asked about her grandparents, or why they never visited them, even though Visalia was only five hours away.” How have her mother’s parents treated her and those she loves? Why do you think they’ve acted that way? How does it make you feel?

13. Why don’t Frankie’s parents accept him and who he is? How does this parallel the way Phillip’s family treats him? How does it compare to the way Bug’s grandparents treated Bug’s father and Daniel?

14. Describe Flo and the times that Bug and Frankie encounter Flo. Why does Frankie care so much about meeting Flo? Why does Flo include Frankie in the phrase “us folk,” and what is Frankie’s reaction?

15. After Phillip is attacked, Aunt Teri says, “‘If you ask me, he deserved what he got.’” Why was Phillip attacked? Why is Aunt Teri so hostile toward him? Why was she so hostile to Bug’s father?

16. Although she sees many aspects of Aunt Teri that she doesn’t agree with, what does Bug learn from her mother about her aunt that shows her being supportive? Talk about the observation that Bug “was also starting to understand how Mama could be angry at Aunt Teri and still love her. After all, Mama was the one who always said that people were complicated.” Do you agree or disagree with Mama’s statement? Explain your answer using examples of how people are or aren’t complicated.

17. When Bug labels her grandparents as prejudiced, Mama says, “‘Everyone is prejudiced. It’s what you do with the prejudice that matters.’” Discuss those statements and the reasons why Mama goes on to tell Bug that you can choose to “‘judge people for who they are, not what they are.’” How might you go about following this advice in your own life?

18. After learning about her grandparents, Bug says, “‘Now I understand why we don’t have any other family.’” But Mama disagrees, saying, “‘We do . . . It’s just a different kind of family.’” What does she mean by that? How has Frankie also expanded his family this summer?

What would Bug say about Frankie in a letter to someone who didn’t know him? What would Frankie say about Bug? Have students choose a character and write a letter from that character’s perspective about their new friend, describing their personality, how they became friends, and what they like most about the other person.

Venice, California, is clearly a colorful place that would attract visitors. Invite students to create a travel poster about the city based on what they’ve learned in the novel and what they can learn through internet research. The poster should illustrate and list attractions that would appeal to tourists.

Bug admires Frankie’s approach to investigating the Midnight Marauder. Ask students to make a list of all the steps that Frankie and Bug take in their investigation. The students can then add any additional steps they think would have been helpful; consider having them make these in a different font or color to distinguish their ideas from the book content. Have students meet in small groups to compare what they’ve written and any suggestions they’ve added.

Mama repeatedly tells Bug that “‘Life isn’t fair—the most you can hope for is that it’s just.’” Ask students to write an essay about that idea and relate it to the novel. Why isn’t life fair? What defines fairness? What is justice? What’s the difference between fairness and justice? How can you tell them apart? What does Bug see as unfair about her life? Does she get justice?

AIDS is a disease which began to spread in the US in the 1980s. Share more about the disease and timeline here: https://npin.cdc.gov/pages/hiv-and-aids-timeline#1980. Have each student research an aspect of AIDS such as its history, medical treatments, current statistics, famous people who have or had AIDS, or the way it was initially perceived. They should compile what they find and share it with the class. 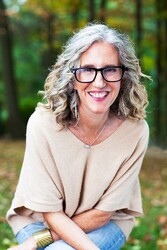 Gayle Forman is an award-winning author and journalist whose articles have appeared in numerous publications, including Seventeen, Cosmopolitan, and Elle in the US. Gayle Forman’s novel, If I Stay, was released as a blockbuster movie starring Chloë Grace Moretz in 2014. Her most recent YA novel is We Are Inevitable. Gayle lives in Brooklyn, New York with her family.