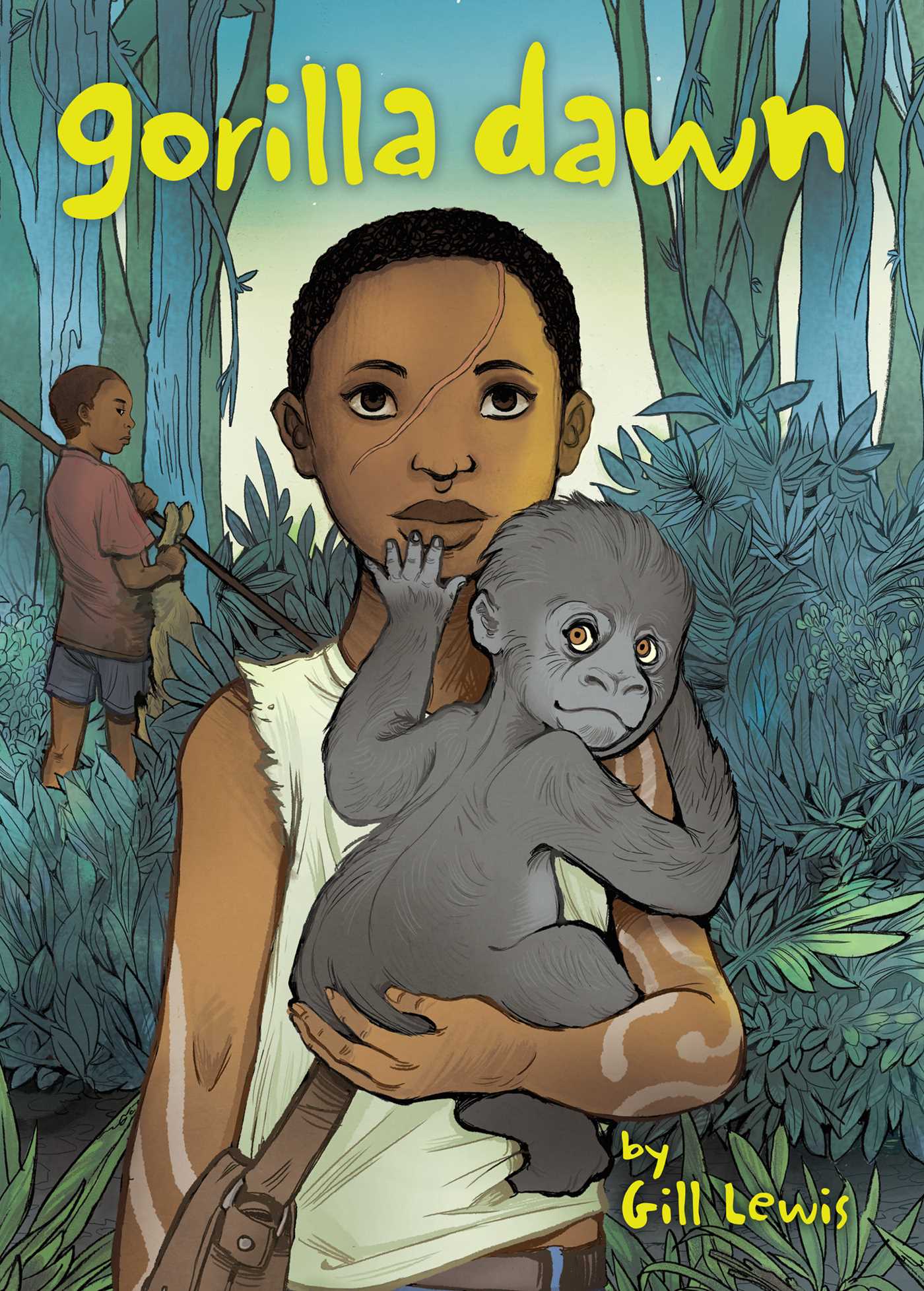 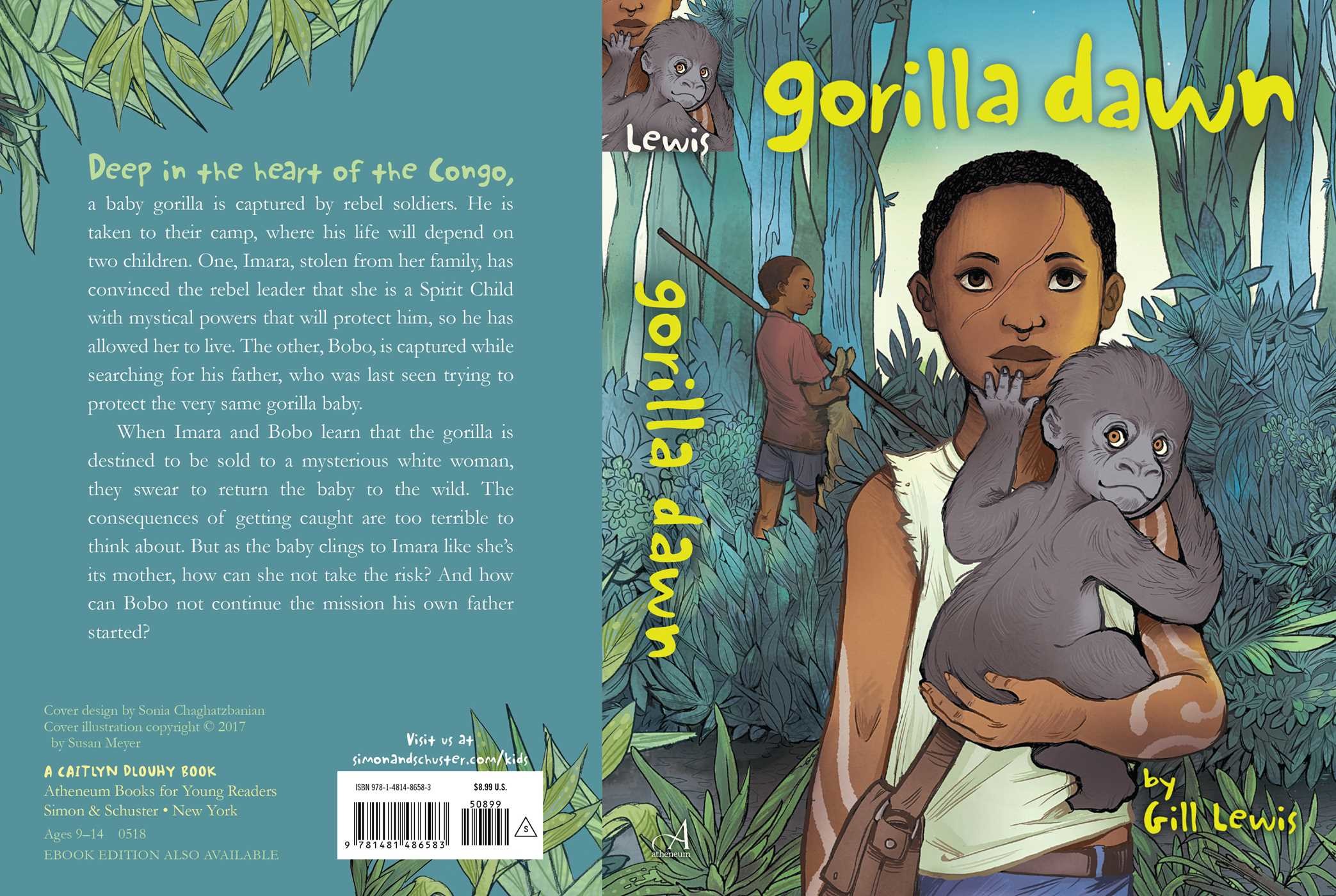 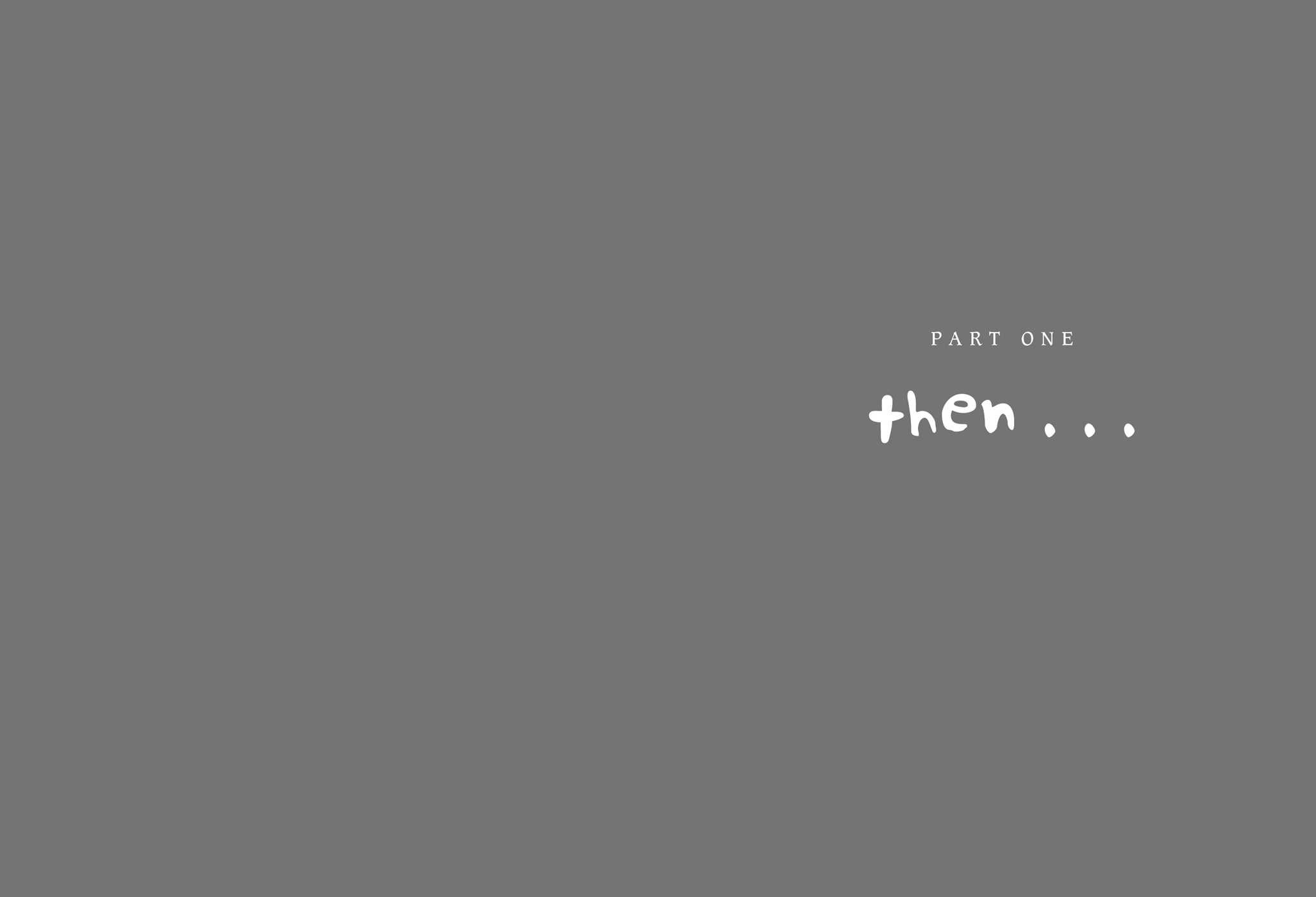 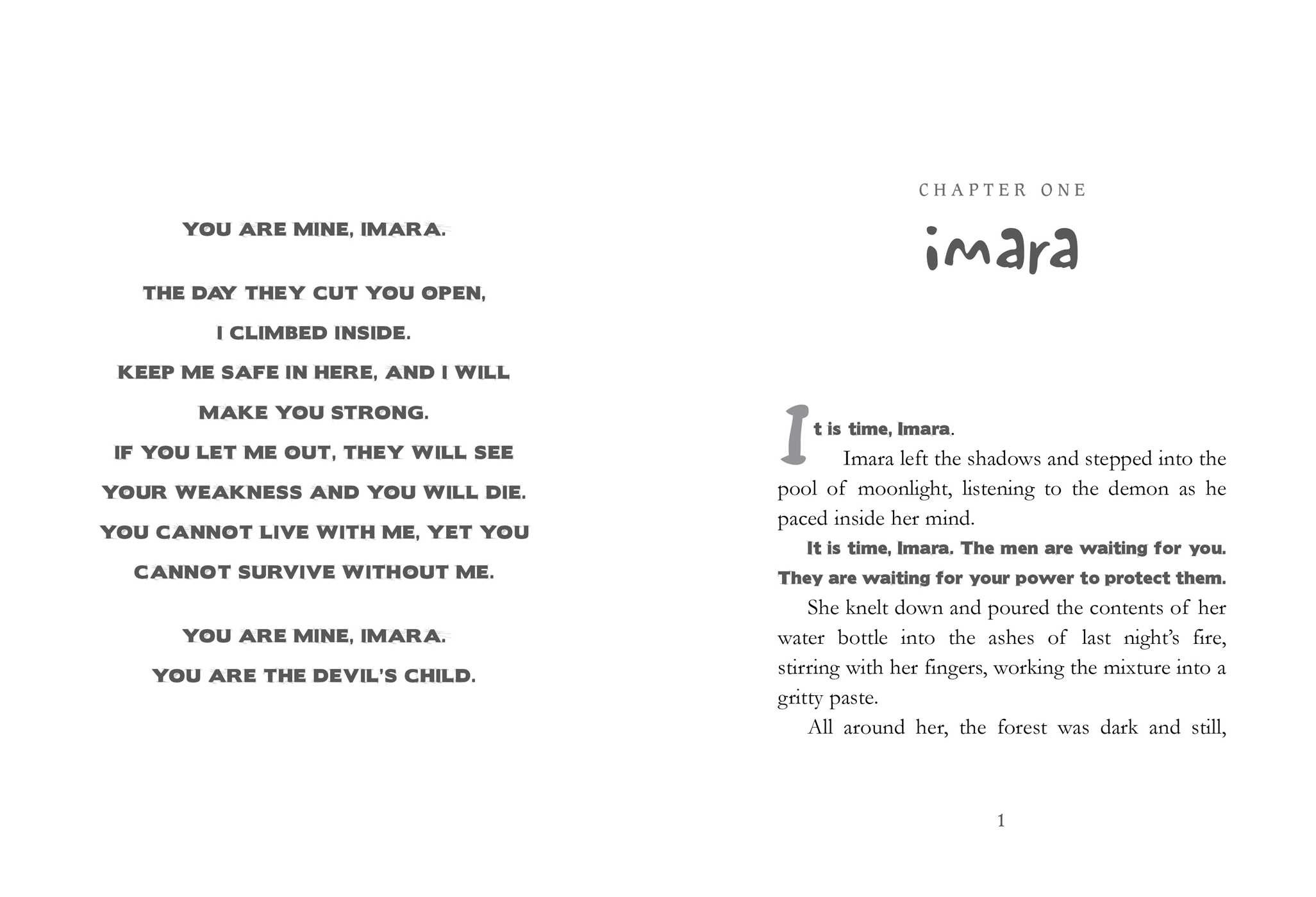 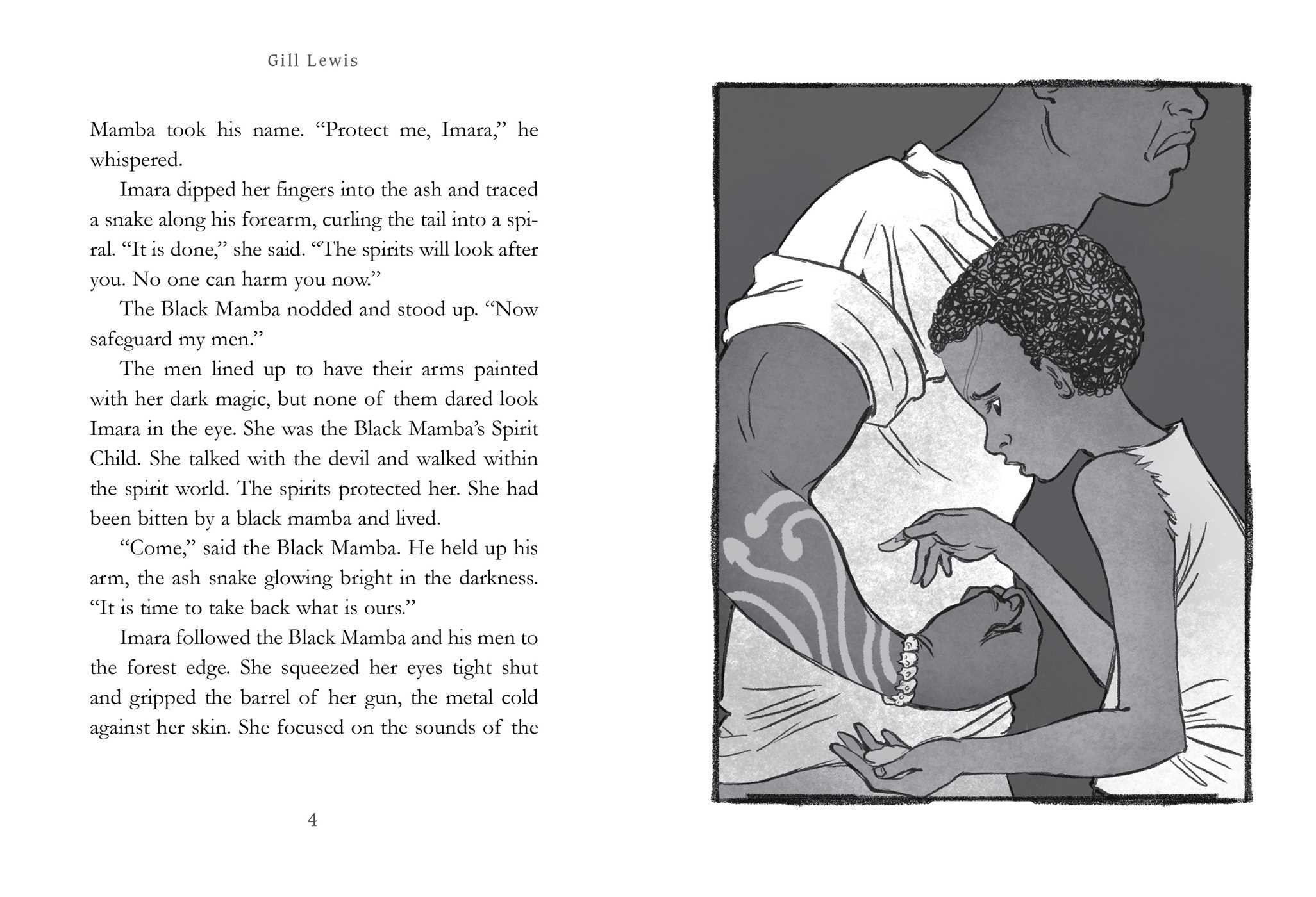 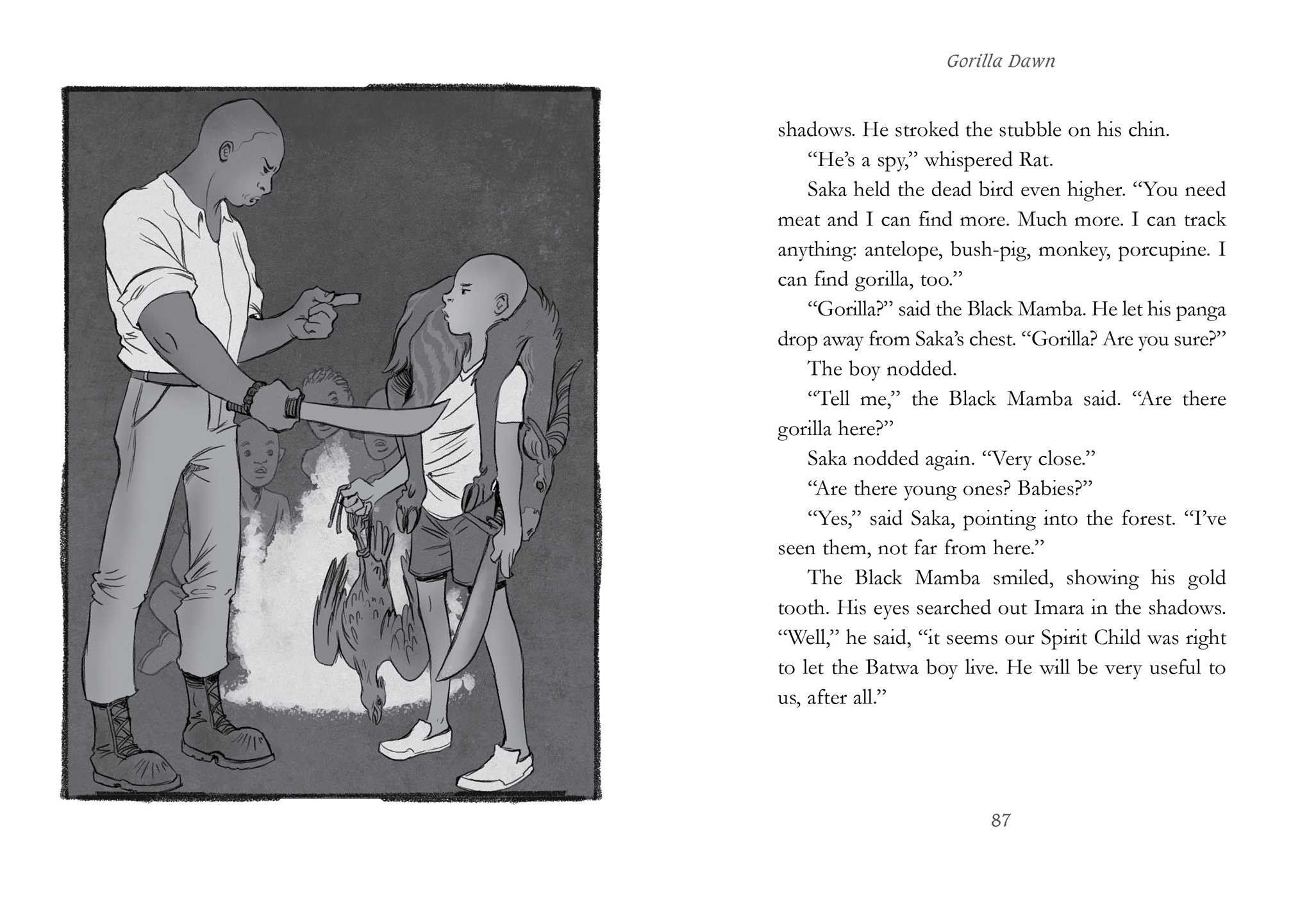 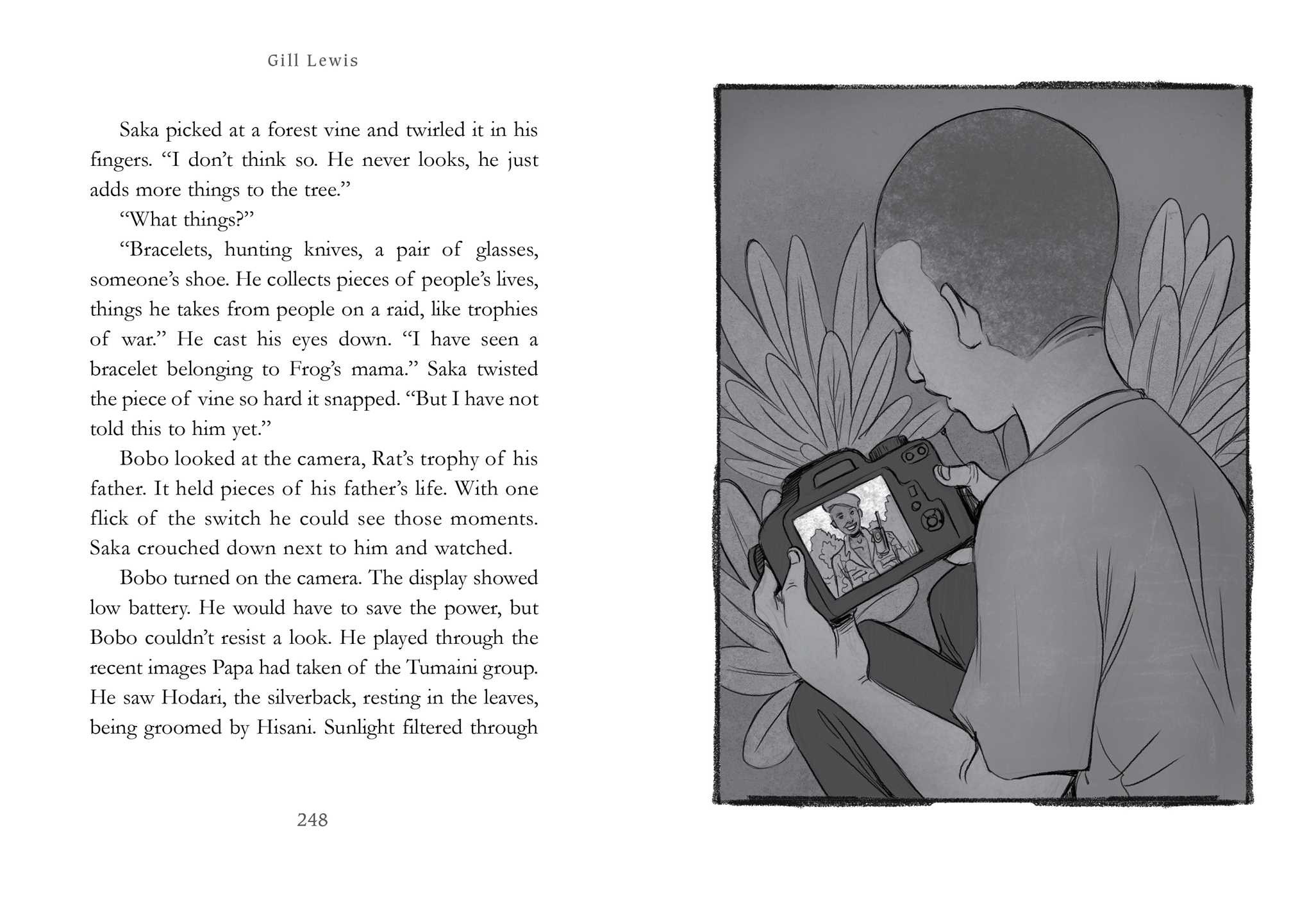 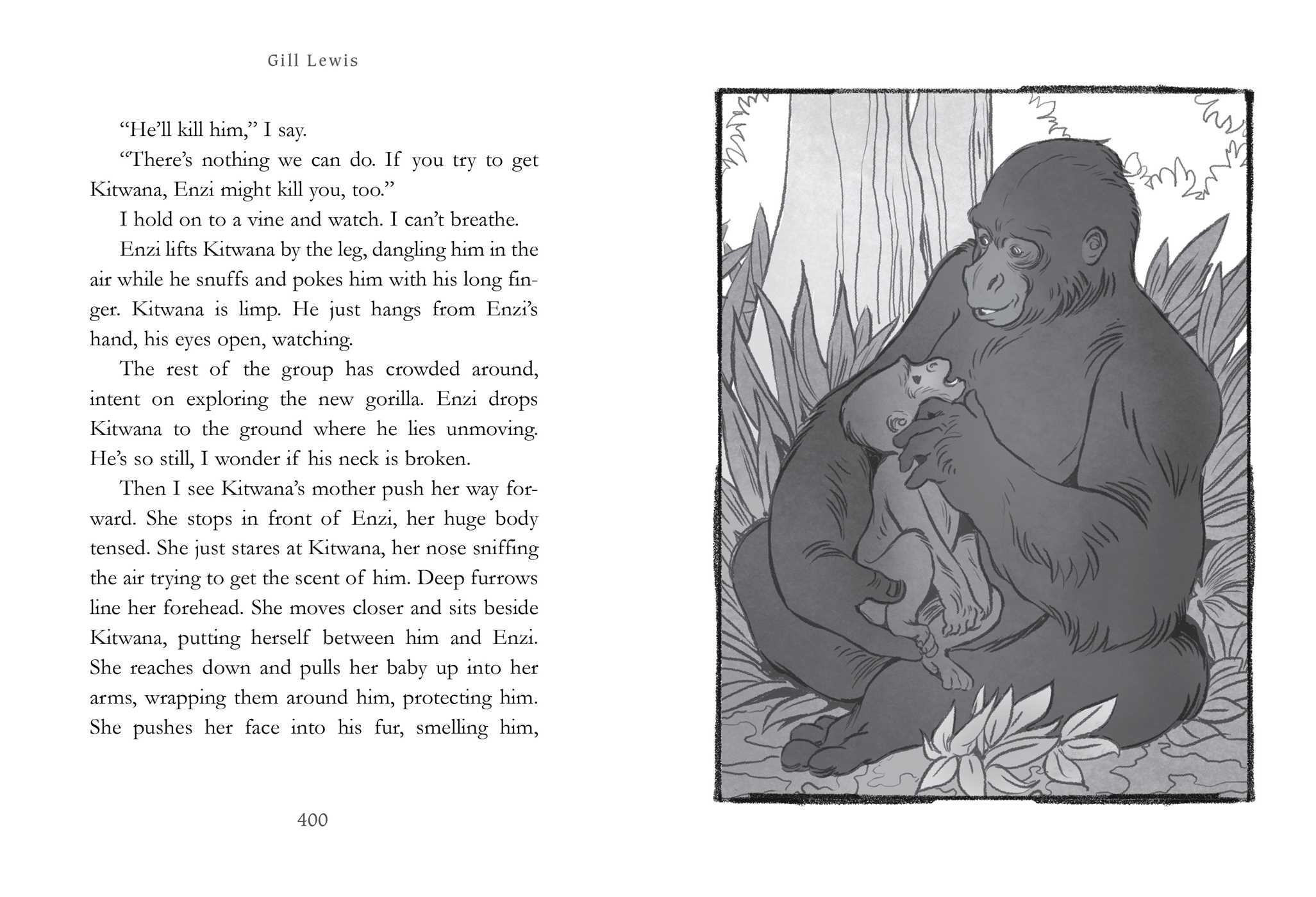 Imara and Bobo are two children living with a band of rebel soldiers in the African jungle. When an orphaned gorilla is brought to their camp they swear to protect it. But in their war-ravaged world, can they ever find true safety?

Deep in the heart of the Congo, a baby gorilla is captured by a group of rebel soldiers. Imara and Bobo are also prisoners in the rebels’ camp. When they learn that the gorilla will be sold into captivity, they swear to return it to the wild before it’s too late. But the consequences of getting caught are too terrible to think about. Will the bond between the gorilla and the children give them the courage they need to escape?

Gorilla Dawn CHAPTER ONE imara
It is time, Imara.

Imara left the shadows and stepped into the pool of moonlight, listening to the demon as he paced inside her mind.

She knelt down and poured the contents of her water bottle into the ashes of last night’s fire, stirring with her fingers, working the mixture into a gritty paste.

All around her, the forest was dark and still, wrapped in silence. Nothing moved. High above in the canopy, a pale mist clung to the leaves. Thin tendrils of vapor hung in the air, as if the trees were holding their breath, waiting for the dawn.

The Black Mamba and his men were folded into the deep moon-shadows. Only the cold light catching the metal of their rifles told they were not of this place.

Come on, Imara, hissed the demon. They’re watching you.

Imara’s hands hovered over the ash paste and trembled.

Stupid girl. Don’t show your fear. You know what they’ll do if they see your fear.

Imara breathed in deeply, filling her lungs with the cool night air. She tried to block her mind from the purpose of her task. She hummed softly, trying to ignore the demon and scooped the ash paste into her hand.

Hurry, Imara. They want to see their spirit child.

She worked faster, scraping more wet ash from the middle of the fire, squeezing it in her fists, letting the water run out between her fingers. She began to smear the ash paste, covering the raised scar that cut her face in two. She traced its hard ragged surface from her forehead, across her cheek to her lower jaw. The scar had long since healed, sealing the demon deep inside, but its tightness pulled her mouth into a twisted scowl.

She could feel the ash mixture dry and harden like a shell. Next, she smeared the ash paste on her bare arms, painting long sinuous bodies of snakes from her shoulders to her wrists. As the ash dried, it glowed white in the moonlight, bright against her dark skin.

The Black Mamba stepped out from the trees. He was a big man, thick-necked, like a bull buffalo. His anger was unpredictable like one, too. He rolled up his sleeve and thrust his arm in front of Imara. Her eyes came to rest on the snake-bone amulet around his wrist, the snake from which the Black Mamba took his name. “Protect me, Imara,” he whispered.

Imara dipped her fingers into the ash and traced a snake along his forearm, curling the tail into a spiral. “It is done,” she said. “The spirits will look after you. No one can harm you now.”

The Black Mamba nodded and stood up. “Now safeguard my men.”

The men lined up to have their arms painted with her dark magic, but none of them dared look Imara in the eye. She was the Black Mamba’s Spirit Child. She talked with the devil and walked within the spirit world. The spirits protected her. She had been bitten by a black mamba and lived.

“Come,” said the Black Mamba. He held up his arm, the ash snake glowing bright in the darkness. “It is time to take back what is ours.” 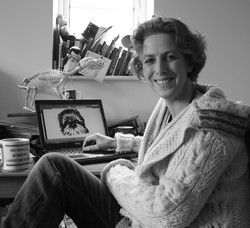 Courtesy of the author
Gill Lewis

Gill Lewis is the author of the critically acclaimed Wild Wings and One White Dolphin, both winners of the Green Earth Book Award, as well as Moon Bear, Gorilla Dawn, and Scarlet Ibis. A veterinarian, her love of animals and the natural world plays a big part in her writing. She lives in the UK.