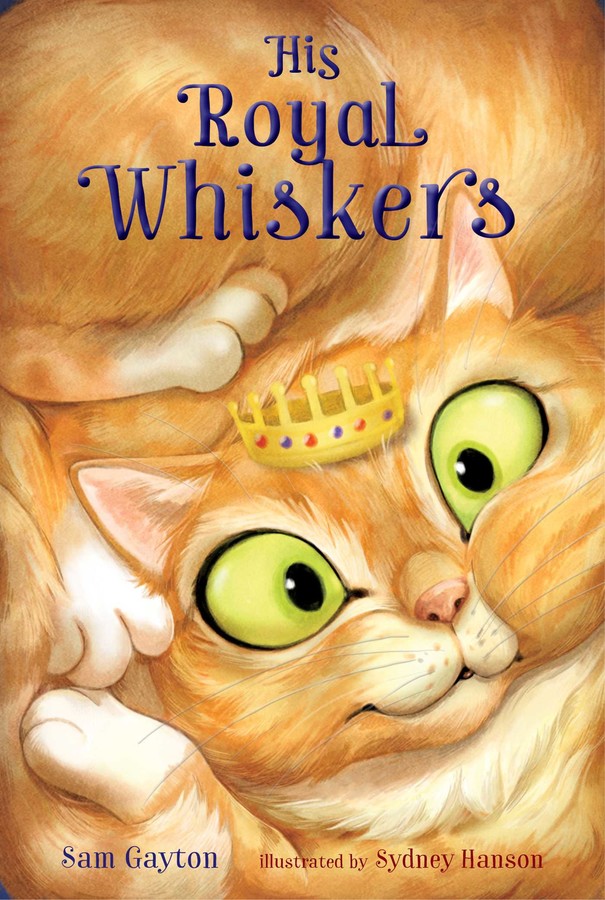 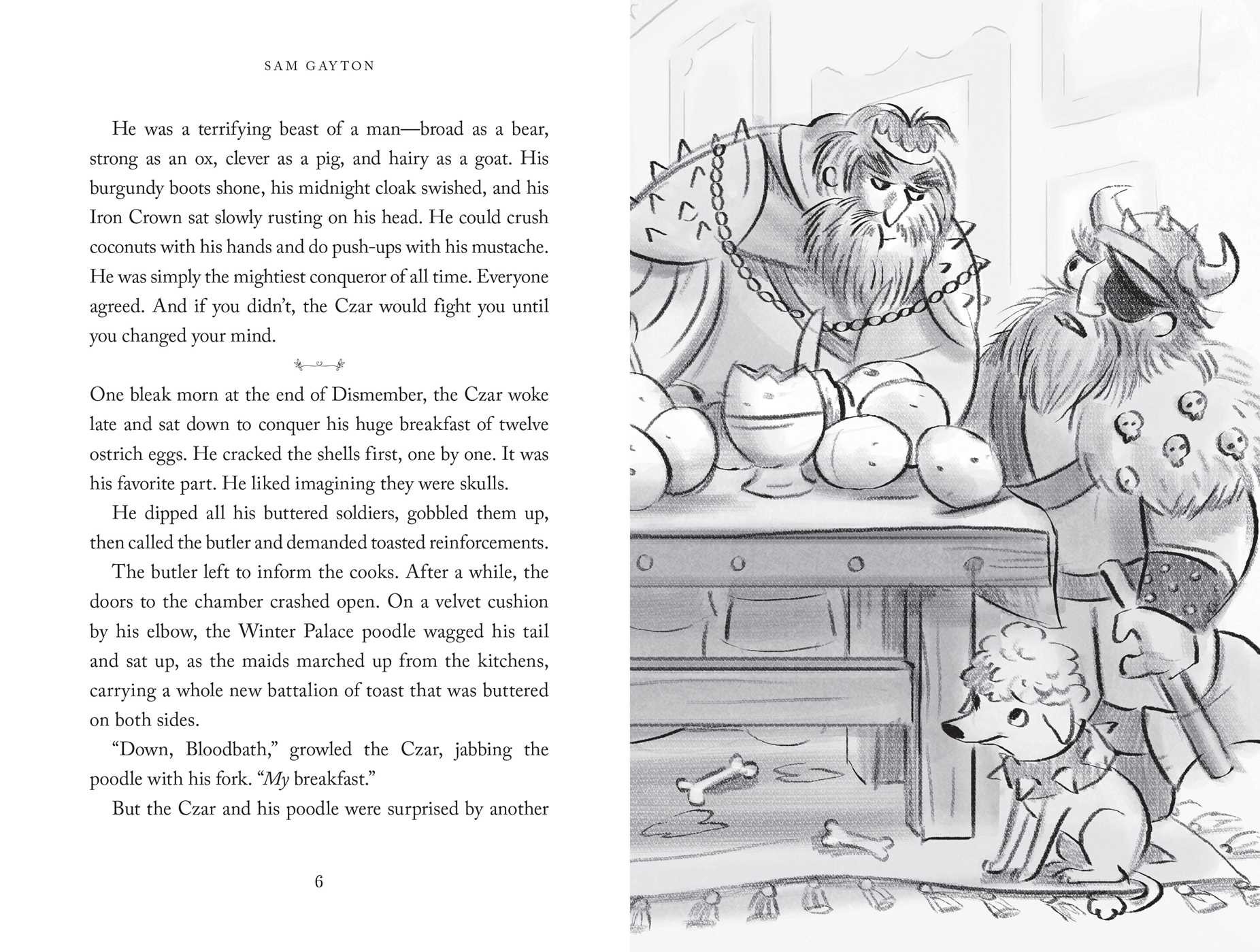 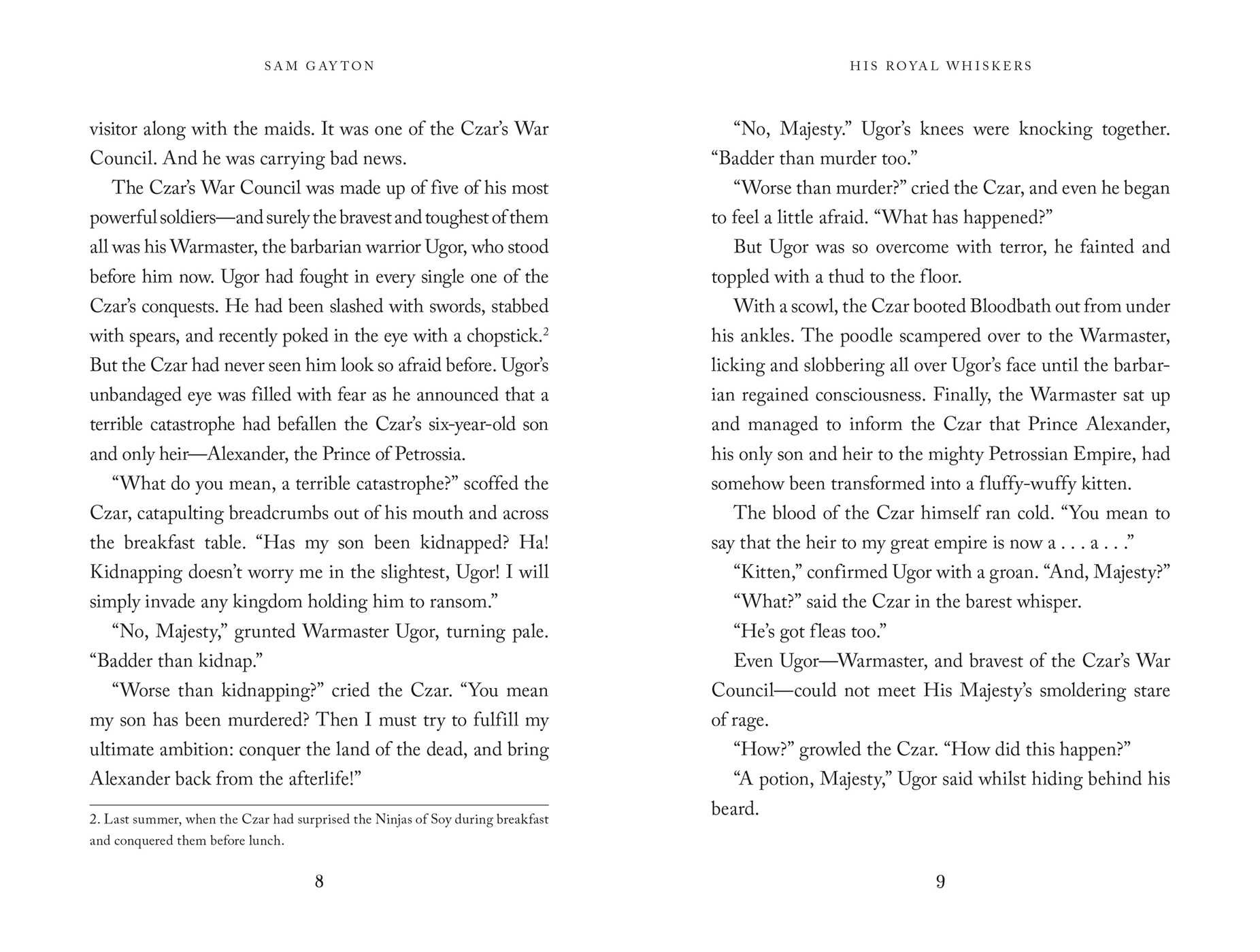 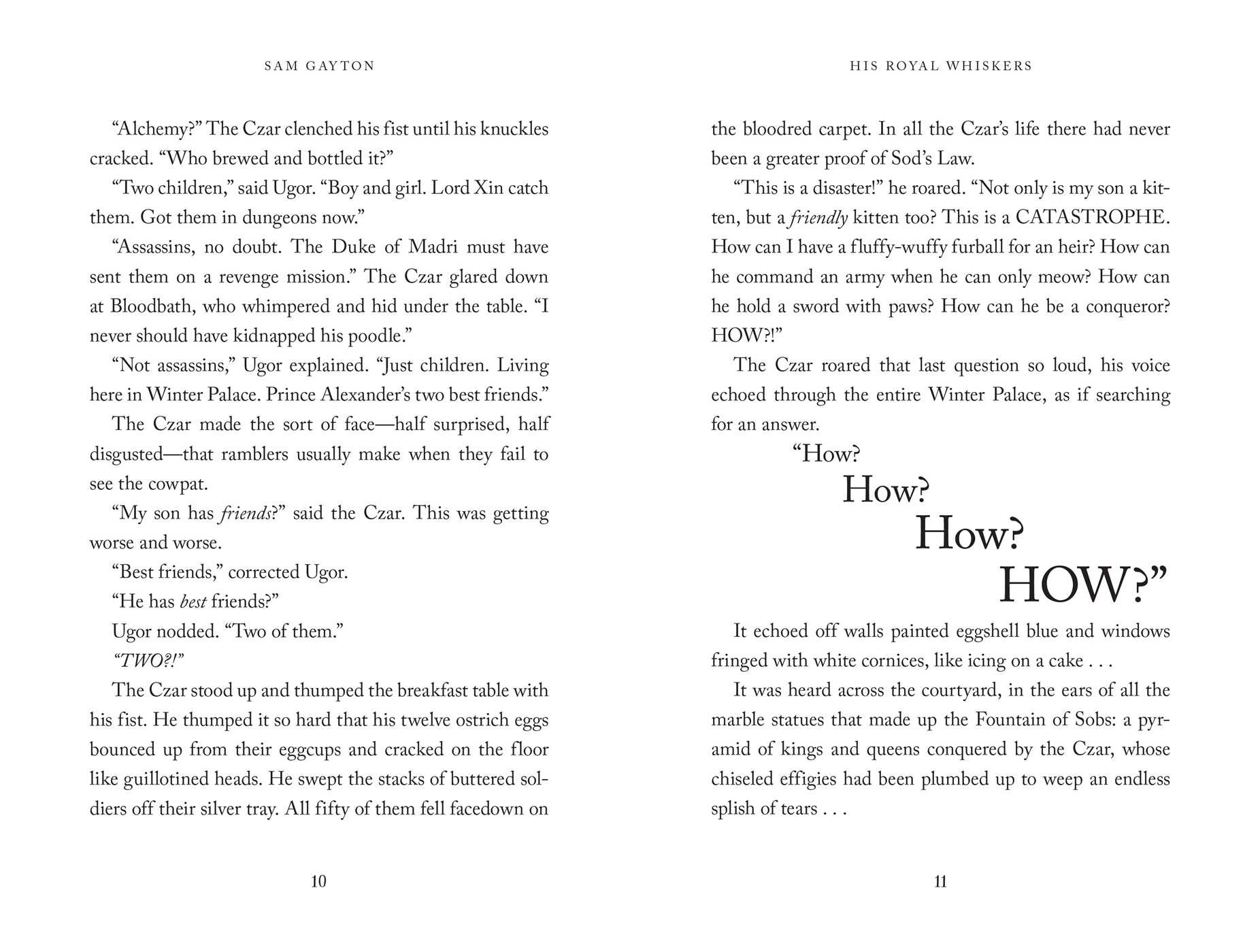 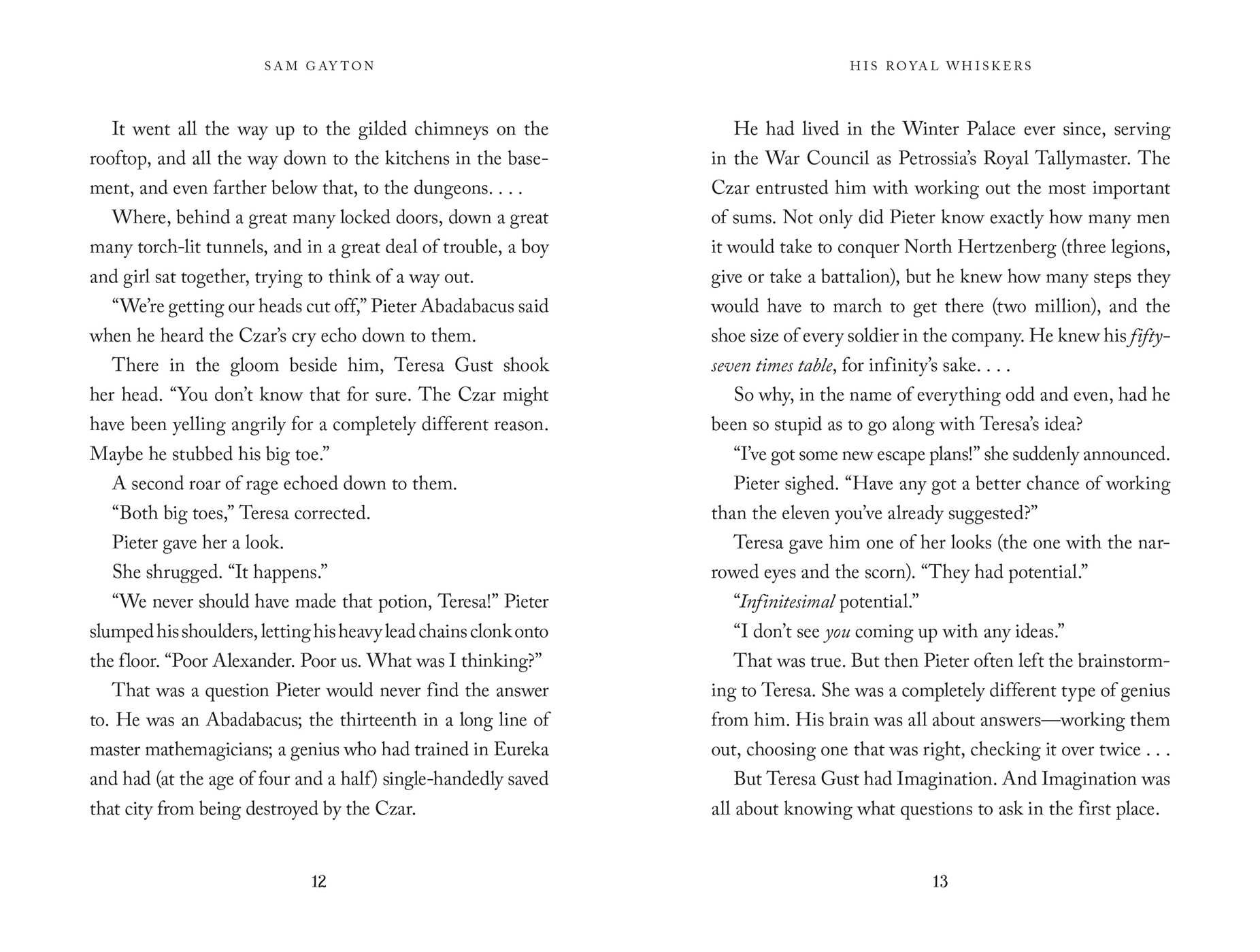 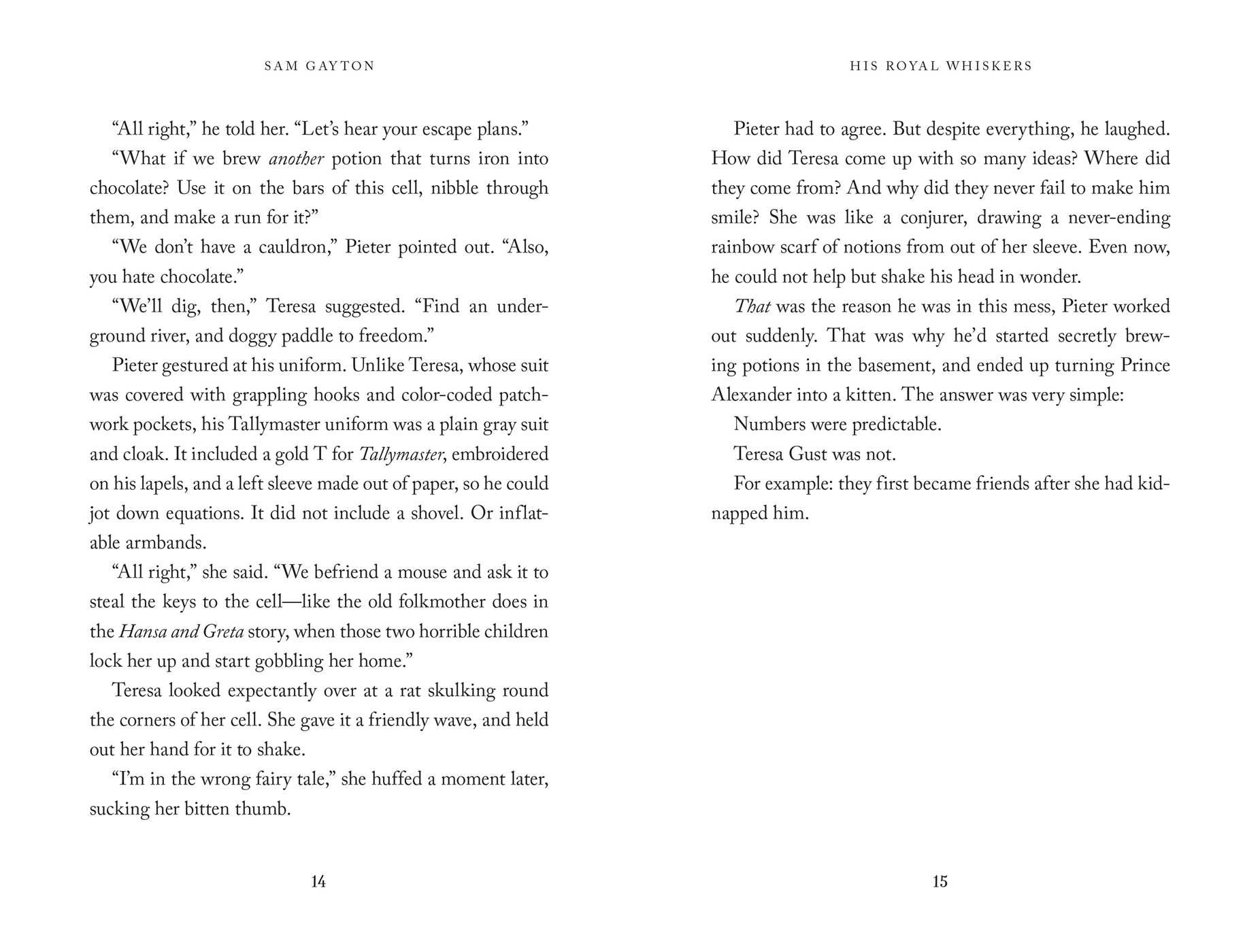 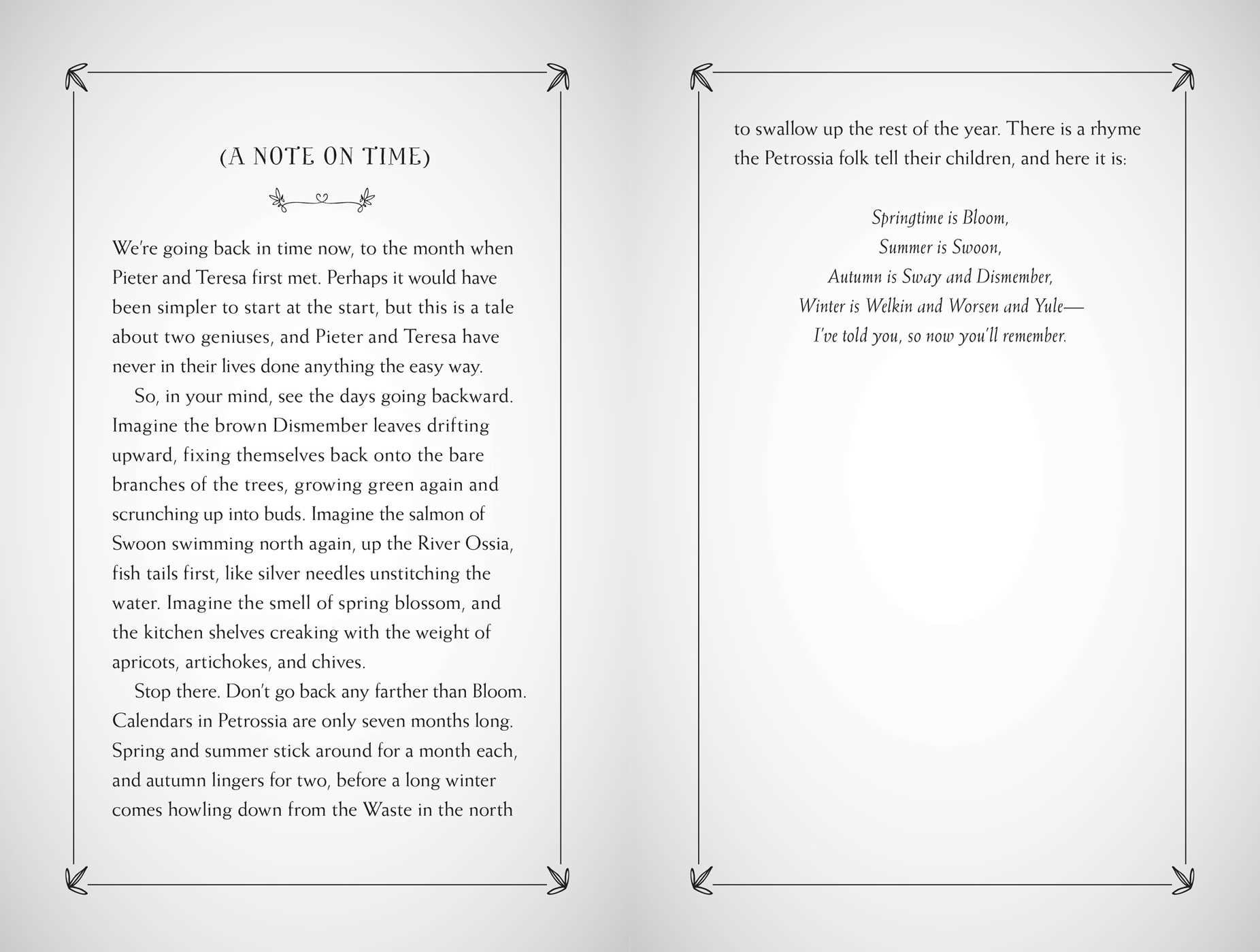 A young alchemist and a giant cat stage a meow-tiny to take down an evil czar in this charming Carnegie Medal–nominated middle grade adventure.

Something bad has happened to Prince Alexander, the only heir to the mighty Petrossian Empire.

Something worse than kidnapping.

Something worse than murder.

Somehow, the Prince has been miraculously transformed into a fluffy kitten—and a large one, at that. Giant, in fact. Dinosaur-sized. And his father, the bloodthirsty czar, is not happy.

Why has this terrible catastrophe happened? Who are the boy and girl brewing secret potions down in the palace kitchens? And how are they paws-sibly going to avoid getting their heads chopped off?

His Royal Whiskers 1 Bad News at Breakfast
Bloom and Swoon and many a moon ago, in the lands beyond the Boreal Sea, there lived a mighty king who loved conquering. He conquered crowns and cities and countries. His name was the Czar.

Conquering was the Czar’s favorite hobby. He practiced all the time, so he was really rather good at it. He could conquer a whole kingdom guarded by ten thousand soldiers using nothing but a tin whistle, a fishing rod, and a herd of reindeer.1

He was a terrifying beast of a man—broad as a bear, strong as an ox, clever as a pig, and hairy as a goat. His burgundy boots shone, his midnight cloak swished, and his Iron Crown sat slowly rusting on his head. He could crush coconuts with his hands and do push-ups with his mustache. He was simply the mightiest conqueror of all time. Everyone agreed. And if you didn’t, the Czar would fight you until you changed your mind.

One bleak morn at the end of Dismember, the Czar woke late and sat down to conquer his huge breakfast of twelve ostrich eggs. He cracked the shells first, one by one. It was his favorite part. He liked imagining they were skulls.

He dipped all his buttered soldiers, gobbled them up, then called the butler and demanded toasted reinforcements.

The butler left to inform the cooks. After a while, the doors to the chamber crashed open. On a velvet cushion by his elbow, the Winter Palace poodle wagged his tail and sat up, as the maids marched up from the kitchens, carrying a whole new battalion of toast that was buttered on both sides.

“Down, Bloodbath,” growled the Czar, jabbing the poodle with his fork. “My breakfast.”

But the Czar and his poodle were surprised by another visitor along with the maids. It was one of the Czar’s War Council. And he was carrying bad news.
Sam Gayton

Sam Gayton grew up in Kent with a cat called Archibald, a dog called Ruby, a bunch of humans, and a ghost called Kevin. He spent his days playing with Lego, and making comics with his friend Loo Loo. Nowadays, Sam still loves Lego and comics. But he also loves drinking tea (milk, no sugar), eating pizza (pepperoni, extra cheese), and wondering how long he would survive a zombie apocalypse (probably about fourteen minutes).

Sydney Hanson is the illustrator of Construction Cat. She was raised in Minnesota alongside numerous pets and brothers. When she wasn’t tunneling through snowdrifts or rescuing frogs from rain gutters, she was drawing. Her illustrations and paintings still reflect these early adventures and are marked by a love for animals and the natural world. She lives in Los Angeles where she’s worked for several animation shops. In her spare time she enjoys traveling and spending time outside with her adopted brother, a Labrador retriever named Cash.