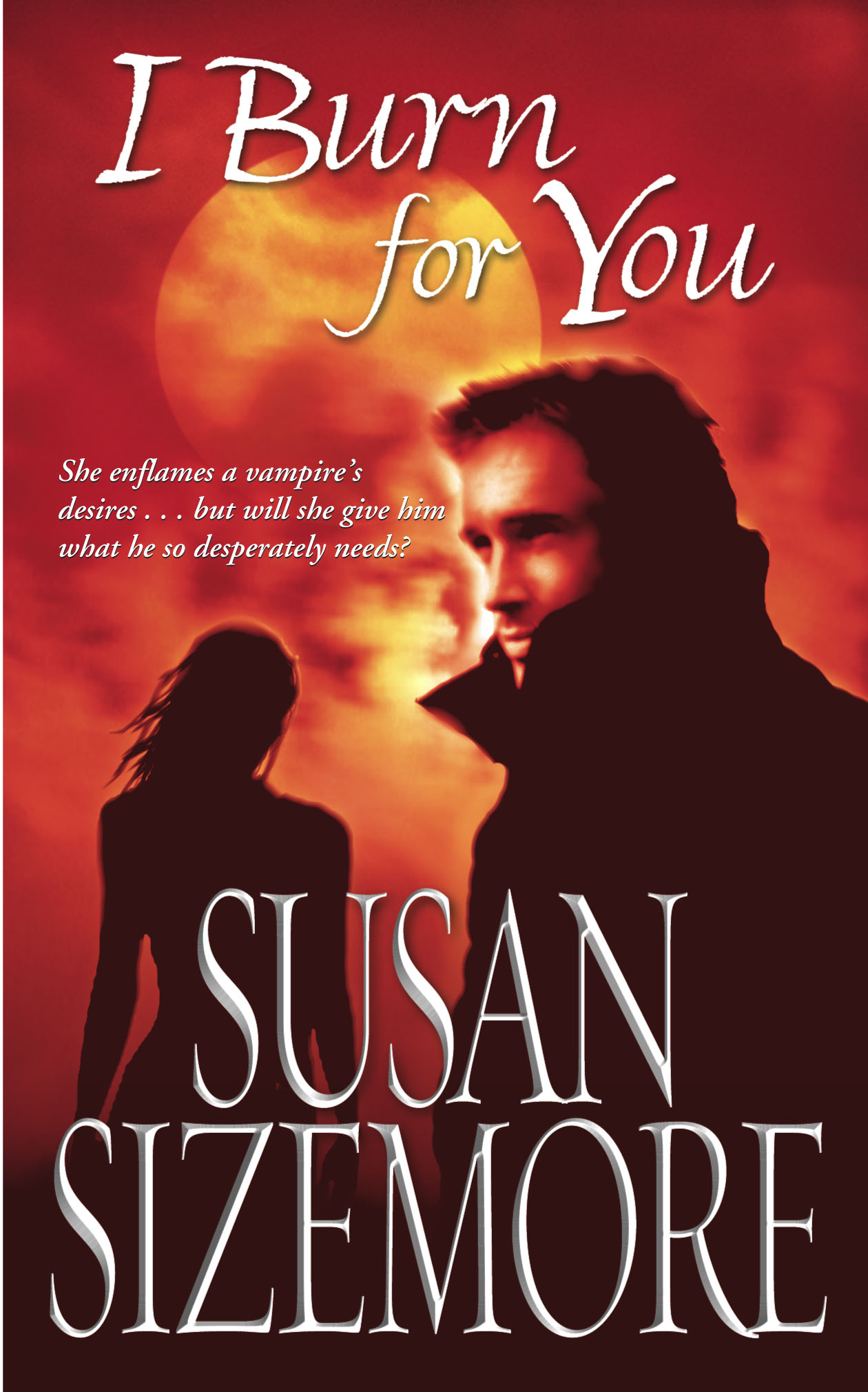 I Burn For You

Embrace the darkness in a sensual new vampire romance novel from acclaimed author Susan Sizemore....
The world holds great danger for Alec Reynard and his kind. As the dark hollows of his soul threaten to overwhelm him, he undergoes secret medical treatments that allow him to bear daylight. Living a double life as a bodyguard, he must also battle the powerful chemistry that explodes between him and Domini Lancer, a mere mortal -- and, unbelievably, his soulmate.
Domini knows nothing of Alec's true nature. But when danger threatens, he kidnaps her to his clan's stronghold to protect her....and there, he can no longer hide who -- or what -- he is. As the forces aligned against Domini draw near, Alec wonders whether she'll accept the darkness within him -- or whether she's actually a vampire slayer who's cleverly infiltrated his clan.

He was growing hungry for the night.

Despite modern advances that made dwelling in daylight both possible and enjoyable, Alexander Reynard felt the longing to return to darkness stalking him. Especially right now, when driving through the heavy morning traffic in bright sunlight gave him a blistering headache, despite his tinted windshield and dark sunglasses. He used to enjoy the gift of being able to greet the dawn and all the bright hours after, but lately, light hurt. And he feared he was reverting.

Alec had forced himself to sleep last night through stubborn tenacity, to prove that he could still do it. He would not let nature conquer will. He had slept, and that may have been a mistake. For in his dreams, a woman came into his bed.

She had floated into his senses on a fragrant mist. Her skin had been warm and wet, her flesh firm and slick as satin. He'd woken up hot and hard in a tangle of sweat-soaked sheets. There'd been blood on his lips and molten hunger in his veins.

Head back, he'd howled his need into the dark. Though it had been a dream, the woman was real; he was certain of that. All he had to do was find her. Claim her. It had taken all his will not to run out into the embracing night and start the search then and there.

He didn't want this now. This was not a good time or place for the beginning of a quest.

Head pounding from the sun, Alec found a place to park on Hill Street near the huge Central Market. It was at least a three-block walk through bright sunlight to his destination; if he cut through the market, he could get out of the sun for a while.

Domini Lancer woke from disorienting dreams of angels, peaches, and making love. Once awake, a powerful craving for peaches remained. She even smelled peaches while she took a long, hot shower to try to wipe the dream from her mind. But she couldn't forget it, or the strong urge to buy some peaches on the way to work. She'd tried to ignore the ridiculous urge, yet here she was at the Center Market, right where her premonition had demanded she be. This absolute need to follow a dream had never happened to her before, and she was a little scared. Scared that maybe she was going crazy. More scared of whatever was about to happen. And even worse, scared that nothing was going to happen. She'd never had such a powerful premonition before, so if this turned out to be the usual petty crap her visions pulled on her, instead of something momentous, she was really going to be pissed off.

As was her boss, whom she'd called to say she'd be late.

Old Man Lancer didn't make any allowances for Domini being his granddaughter. His deep, whiskey-growly voice had been annoyed when he said, "Fine," and hung up the phone. Though he'd always comforted her when she had dreams that came true as a kid, as an adult he didn't cut her any slack, and she didn't bring up the subject of being psychic anymore. Maybe because both of them wished she wasn't.

Domini heard music, and turned around. Melissa Etheridge's "Angels Would Fall" was coming from a radio at a fruit vendor's stand -- where a pyramid of peaches was piled high at the front of the stand, gold as the morning sun, almost shining with their own light in the dim market. She couldn't help but take a step closer. The music swelled around her, bright, lively, and full of aching secret passion.

Swaying to the sound, Domini picked up the peach at the very top of the pile. Its velvet fuzz brushed sensuously across her palm, more tempting than Eve's apple. She felt as if one bite of it might send her into a Sleeping Beauty trance -- or make her fall in love.

She raised it to her lips.

"You want to pay for that first?" the vendor asked.

The music faded into the background; reality came rushing back in.

Domini blinked. She smiled apologetically and quickly dropped the fruit into the vendor's outstretched hand. "I'll have a dozen," she said, and handed eleven more peaches to the woman.

After she'd paid and taken the plastic bag of fruit from the vendor, Domini headed toward the nearest exit, boiling with frustration at the universe that had cursed her with such pointless foresight. For God's sake -- was that it?

Why had it been so desperately important to race to Central Market, when all she'd been meant to do was listen to a song on the radio?

"I could have stayed home and done that," she grumbled.

"Do you always talk to yourself?" a male voice asked, his voice soft yet self-confident -- caressing?

Domini turned to look for the man who'd spoken. When she moved her head, something soft as a breeze, intimate as a kiss, brushed against the back of her neck. It sent a cold shiver of fear down her spine and heat racing through her blood. The combination was as dizzying as peach brandy.

Though the market was crowded, suddenly she felt as alone as if she were standing on the moon.

And someone was watching her.

Domini turned slowly around, alert to any threat, to anything out of the ordinary. The routine of running a visual sweep of her location helped calm her.

The market was a huge open space, full of noise, bustling with people shopping at aisle upon aisle of stands, and breakfasting at the snack bars. Despite the overhead lights, neon signs, and sunlight flooding in from entrances on all four sides, there was a shadowed quality about the warehouselike building.

Nothing seemed out of place. It was a normal morning, with people going about their business and enjoying the sights and sounds of the place. There was no threat within.

Domini turned her attention to the entrance and instantly saw him standing in the doorway, just across the street from the Angels' Flight sign. He wore sunglasses, yet she knew the eyes behind the dark lenses were fixed on her. She stared boldly back.

His tall, broad-shouldered silhouette was haloed by the California sunshine. His features were shadowed by the brim of the sort of hat that reminded her of Indiana Jones. All she could make out was a square jaw and cleft chin, covered by dark beard stubble.

But how could he be the one who had spoken to her, when he was halfway across the market? Unless...

Unnerved, Domini turned and hurried for the opposite entrance. She didn't know what to make of all this; all she knew was that she had to get out of here right now. It was all she could do not to run, or look back over her shoulder to make sure he wasn't following her.

Alec watched the tall beauty go. He was left with a memory of long dark hair, a wide, full mouth, long legs, and lithe movement. As she fled, he fought down the urge to follow her with all the will he could muster. Her confusion and fear clawed at him. He forced himself to remain still as pain surged through him, wanting her with all his soul, bleeding inside at knowing she rejected anything to do with him. He told himself she had every right to run, and didn't let his primal response to flight rule him. He stayed on the leash, though breathing came hard and every muscle in his body tensed solid as stone.

Let her run. It will be all right.

Even as he told himself this, the shrouded part of him hated her for running -- that creature believed in soul-bonding passion at first sight. But Alexander Reynard was more civilized than that. Or so he must believe, for the woman's sake, even more than his own.

What was happening to her was beyond her ken. And very nearly beyond his, at this moment. If they touched now, it would be raw and rough.

He hadn't expected to find her so soon, and losing her instantly dealt a blow to his soul. He wanted to throw back his head and howl, the way he had last night. But he would live with the loss for now, would fight down the arousal their brief touching of minds brought him. Or at least he'd live with it until he could offer her a man, not a monster.

He could have followed her easily. Her scent perfumed the air; her aura cut a bright swath easily discernible even in the tangled mix of life signs within the crowd. But he deliberately turned his back on that path. In a few minutes, he had a meeting at a nearby hole-in-the-wall joint, a meeting that was his purpose in coming into downtown Los Angeles. He would stick to that purpose, and endure what needed to be endured.

Alec made his tightly fisted hands relax, then he made himself walk through the market and out the other side, just as he'd originally planned. 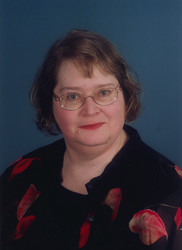 Connie Brockway A dark, sexy dream of a book. You won't want to put it down.

Romantic Times Ms. Sizemore's breed of vampire is intriguing and her delivery compelling.

I Burn For You