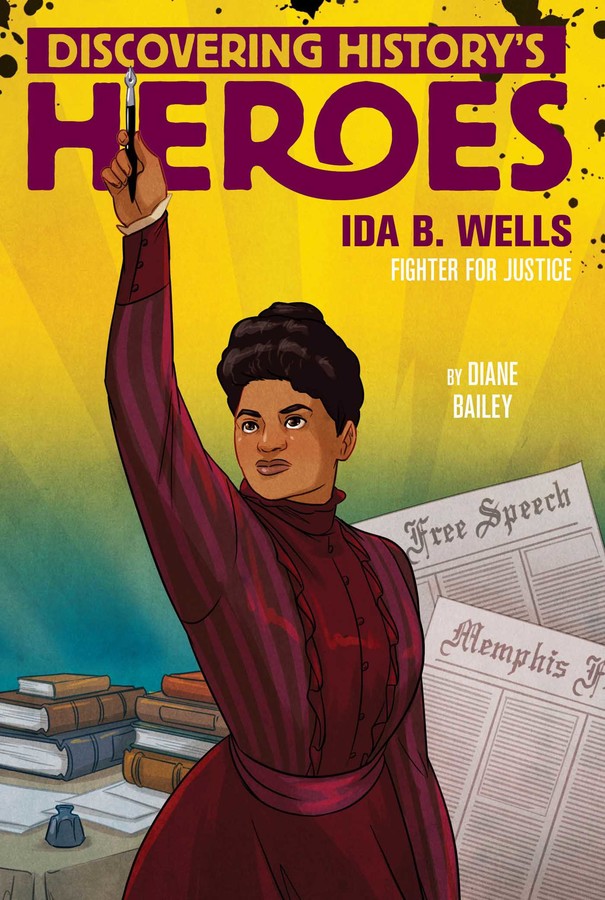 Jeter Publishing presents a brand-new series that celebrates men and women who altered the course of history but may not be as well-known as their counterparts.

Ida B. Wells was an African-American journalist and activist who led an anti-lynching crusade in the United States in the 1890s.

On one fateful train ride from Memphis to Nashville, in May 1884, Wells reached a personal turning point. Having bought a first-class train ticket, she was outraged when the train crew ordered her to move to the car for African Americans. She refused and was forcibly removed from the train—but not before she bit one of the men on the hand. Wells sued the railroad, winning a $500 settlement. However, the decision was later overturned by the Tennessee Supreme Court.

This injustice led Ida B. Wells to pick up a pen to write about issues of race and politics in the South. Using the moniker “Iola,” a number of her articles were published in black newspapers and periodicals. Wells eventually became an owner of the Memphis Free Speech and Headlight, and, later, of the Free Speech.

She even took on the subject of lynching, and in 1898, Wells brought her anti-lynching campaign to the White House, leading a protest in Washington, DC, and calling for President William McKinley to make reforms.

Ida B. Wells never backed down in the fight for justice.

Ida B. Wells 1. GROWING UP FREE
July 16, 1862, started like any other day in Holly Springs, Mississippi. People got up to eat breakfast, got dressed, and went to work. That was what usually happened in the Wells family too. But on this summer day, Lizzie Wells put a hand on her large stomach and looked over at her husband, Jim. Today would be different for them.

“Waaahhhhh!” Not long after, a baby’s cry cut through the air, and Jim and Lizzie welcomed their first child into the world. They named her Ida Bell.

Ida took a deep breath. “Waaahhhh!” She let out another cry, just in case anyone had missed it the first time. She made sure everyone knew she had arrived. It was the first time she made herself heard, but it would not be the last.

The Wellses were African American, and they were slaves. Because her parents were slaves, Ida automatically became a slave when she was born. In Mississippi and several other states in the South, most black people were slaves. Slaves had no rights as people. They were treated like property. They could be sold, just like a house or an animal, and they worked for their white owners for no pay.

Most of them labored in the fields on large farms called plantations. From dawn to dusk they tended the crops. Children did not go to school. Instead they started working as soon as they were old enough. When children got to be around six years old, they carried water to the adults in the fields. By the time they turned eight or nine, they went to work in the fields themselves.

Some slaves led slightly better lives. Ida’s parents were among the lucky ones. They were owned by Spires Boling, a white man who was an architect. Jim and Lizzie Wells didn’t have to work in the fields. They had other skills. Jim was a carpenter, so he built things for Boling, while Lizzie worked as a cook. Unlike many slave owners, who beat their slaves and gave them very little to eat, Boling treated his slaves fairly well.

But that did not make them free.

Ida was born during a time when the United States was undergoing big changes. The Civil War had started in 1861, the year before her birth. The war was primarily about slavery. People in the country’s Southern states believed white people should be able to own slaves. People in the Northern states thought that slaves should be free, just like other Americans. The country split apart over the issue.

For four years the North and the South battled each other. At times the North seemed to be winning. At other times the South surged ahead. Like other Americans the Wellses followed news of the war closely. If the North won, slaves would be freed. Should they get their hopes up?

Ida was about to turn three years old when the war finally ended in 1865. The Northern states had won, and the slaves were set free. It was an exciting time for the Wells family. Finally they could choose what to do with their lives.

At first Ida’s father stayed with Spires Boling. Jim Wells continued to work as a carpenter, but now he earned money. Then Jim had a disagreement with his employer. Before the war, slaves had not been allowed to vote. Now that black people were free, they had more rights. Some African Americans could even vote—and Jim Wells was one of them. He got his first chance during an 1867 election in Holly Springs. Jim’s boss, Boling, wanted a certain man to win, and told Jim to vote for him. Jim had other ideas. He did not like Boling’s choice, and voted for someone else. When Boling found out what Jim had done, he decided to punish the Wells family. Jim got home from voting to find that he had been locked out of his carpentry shop. He was out of a job. Fortunately, the family had saved some money. They rented a different house across the street, and Jim started his own business.

Ida was just five years old when this happened, but it taught her an important lesson. Her father was a man who stood up for himself and his beliefs.

The Wells family was growing. After Ida was born, her parents had three more daughters, Eugenia, Annie, and Lily. They also had four sons. Their names were James, George, Stanley, and Eddie. (Eddie died when he was a baby.)

The Wellses were a strict but happy family. They went to church each Sunday, and Ida grew up with a strong faith in God. Her parents taught their children good manners. Ida always called adults “Mr.” and “Mrs.” She stood up when an adult came into the room, and waited for the older person to take a seat. And she knew how to act like a lady. For example, she would never be caught eating food on the street. Only girls who had not been raised right would do that.

In a big family there were always chores to do. Ida helped her mother cook and keep house. She also looked after her younger siblings. Each Saturday night she made sure her brothers and sisters were ready for church the next morning. She helped them take their baths. She laid out their clothes. She checked to see that their shoes were polished.

Because black people were free, the Wells children were allowed to go to school. Years later Ida wrote an autobiography. In it she remembered that her parents had told their children that they had one main job. It was “to go to school and learn all we could.”2

Ida loved being in the classroom. She especially loved books. She read the Bible and all of the plays by the famous writer William Shakespeare. She liked Little Women by Louisa May Alcott and A Christmas Carol by Charles Dickens. She read the adventure stories of Oliver Optic’s books for boys. It did not matter that she was not a boy. A good story was still a good story!

For a little while Ida’s mother went to school with her. She wanted to learn to read so that she could study the Bible. Ida’s father never learned how, but that was okay. Ida was happy to read the newspaper to him. That way she learned what was happening in the world.

Ida knew that life could be very hard for African Americans. They were not slaves anymore, but they still faced a lot of prejudice, especially in the South. Many white people didn’t want black people to have rights, like being able to own property or vote. Daily living was also unfair for black people. Children went to segregated schools, so that white and black students were not mixed in the same building. Blacks had to use separate bathrooms. They could not eat at “whites only” restaurants or sleep at “whites only” hotels. If a black person and a white person met on the sidewalk, the black person always had to step aside and let the white person go first.

This was the country Ida grew up in. But she also came from a strong, happy family. She was getting an education. She was luckier than many other African Americans.

Then, when she turned sixteen, everything changed.
Diane Bailey

Diane Bailey has written more than fifty nonfiction books for children and young adults. Her most recent titles include books in The Great Outdoors series (Survival Skills, Mountain Biking, Discovering Nature, Water Sports, and Snow Sports), the Black Achievement in Science series (Biology, and Physics), and A First Look at America’s Presidents series (James K. Polk, John Quincy Adams, and William McKinley). She is also a journalist whose work has appeared nationally.

"A fascinating subject and good storytelling combine for a winning text."

" The story of Ida B. Wells portrays a strong woman determined to use her talents to fight for justice and who serves as a role model for young readers. This biography would be a good choice for those studying women’s rights, civil rights, slavery, and the period after the Civil War."