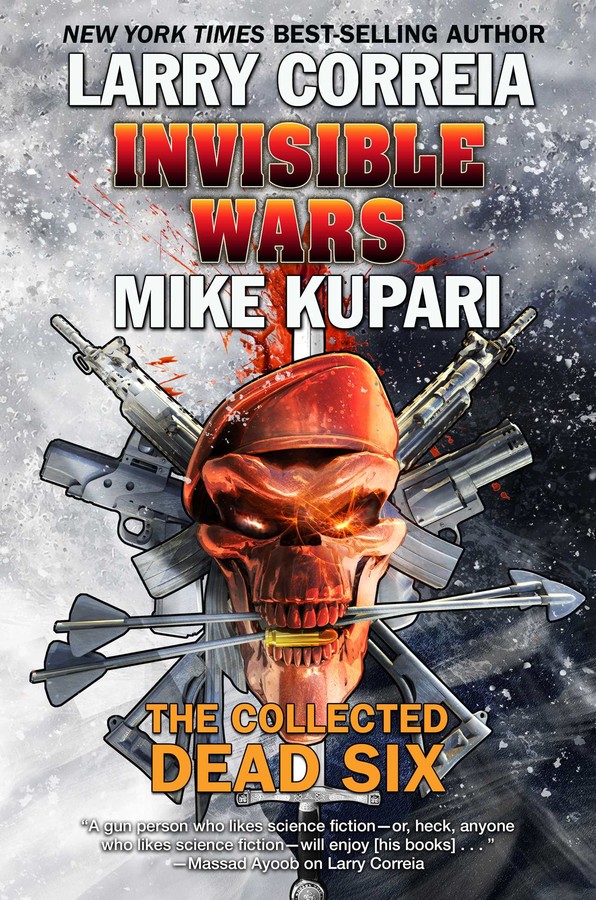 OMNIBUS EDITION OF ALL THE HARD-HITTING MILITARY THRILLER DEAD SIX NOVELS from the creator of the multiple New York Times best-selling Monster Hunter series Larry Correia and the best-selling science fiction author Mike Kupari. Inlcudes the novels Dead Six, Swords of Exodus, Alliance of Shadows, plus three short stories and an all-new introduction from the authors.

The Dead Six series is an inventive and action-packed military adventure series with a touch of conspiracy and big dollop of descriptive firepower!

Dead Six: Michael Valentine has been recruited by the government to conduct a secret counter-terror operation in the Persian Gulf nation of Zubara. The unit is called Dead Six. Their mission is to take the fight to the enemy and not get caught. Lorenzo, assassin and thief extraordinaire, is being blackmailed by the world’s most vicious crime lord. His team has to infiltrate the Zubaran terrorist network and pull off an impossible heist or his family will die. When Dead Six compromises his objective, Lorenzo has a new job: Find and kill Valentine.

Swords of Exodus: On the far side of the world, deep in former Soviet Central Asia, lies a stronghold called the Crossroads. It is run with an iron fist by a brutally effective warlord. Enter Lorenzo, thief extraordinaire, and Michael Valentine, implacable mercenary warrior. Their task: Team with a shadowy organization of modern day Templars and take down a brutal slave lord.

Alliance of Shadows: Europe has spiraled into chaos. In the midst of the disorder, mercenary Michael Valentine and his team are trying to track down an evil woman bent on total power. They’re on their own, with few friends, few resources—and racing against the clock.

“[E]verything I like in fantasy: intense action scenes, evil in horrifying array, good struggling against the darkness, and most of all people—gorgeously flawed human beings faced with horrible moral choices that force them to question and change and grow.”—Jim Butcher

“[A] no-holds-barred all-out page turner that is part science fiction, part horror, and an absolute blast to read.”—Bookreporter.com

“After co-writing Dead Six and Swords of Exodus with Larry Correia, Kupari makes his solo debut with this space opera that is bound to attract fans of Mike Shepherd’s Kris Longknife series or Elizabeth Moon’s Vatta’s War books. An excellent choice for both teen and adult sf readers.” —Library Journal  on Her Brother's Keeper

Larry Correia is the creator of the Wall Street Journal and New York Times best-selling Monster Hunter series, with first entry Monster Hunter International, as well as urban fantasy hardboiled adventure saga the Grimnoir Chronicles, with first entry Hard Magic, and epic fantasy series The Saga of the Forgotten Warrior, with first entry Son of the Black Sword and latest entry, House of Assassins. He is an avid gun user and advocate and shot on a competitive level for many years. Before becoming a full-time writer, he was a military contract accountant, and a small business accountant and manager. Correia lives in Utah with his wife and family.

Mike Kupari is the author of debut science fiction novel Her Brother's Keeper, as well as coauthor, with Larry Correia, of the best-selling Dead Six military adventure series including Dead Six, Swords of Exodus, and Alliance of Shadows. Mike grew up in Michigan’s Upper Peninsula and enlisted at the age of seventeen. Mike is recently returned from his second active duty overseas with the U.S. Air Force, where he was an Explosive Ordnance Disposal Technician in the US Air Force. Mike also served six years in the Army National Guard. He has worked as a security contractor with several firms, did a tour in Southwest Asia with a private military company, and is an NRA certified firearms instructor.