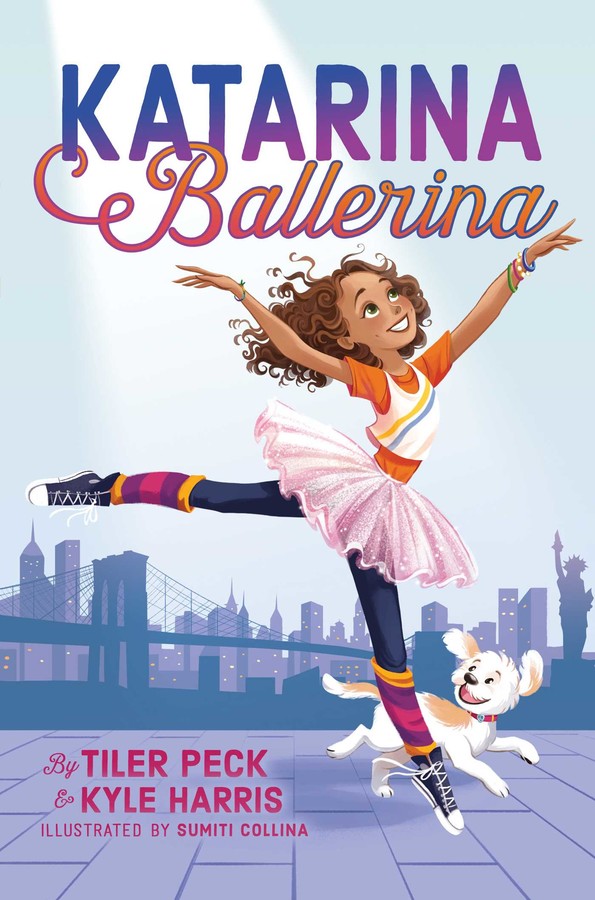 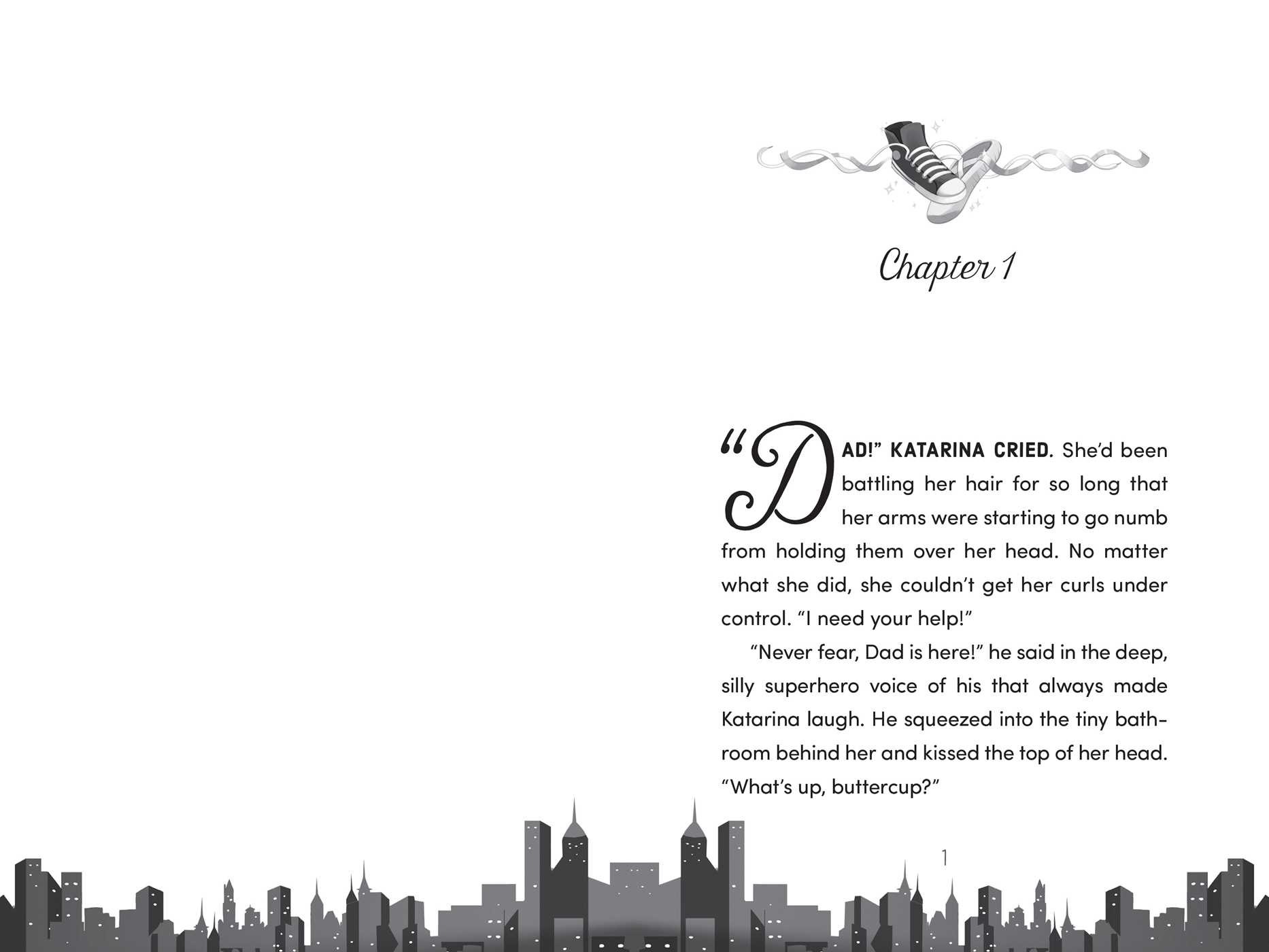 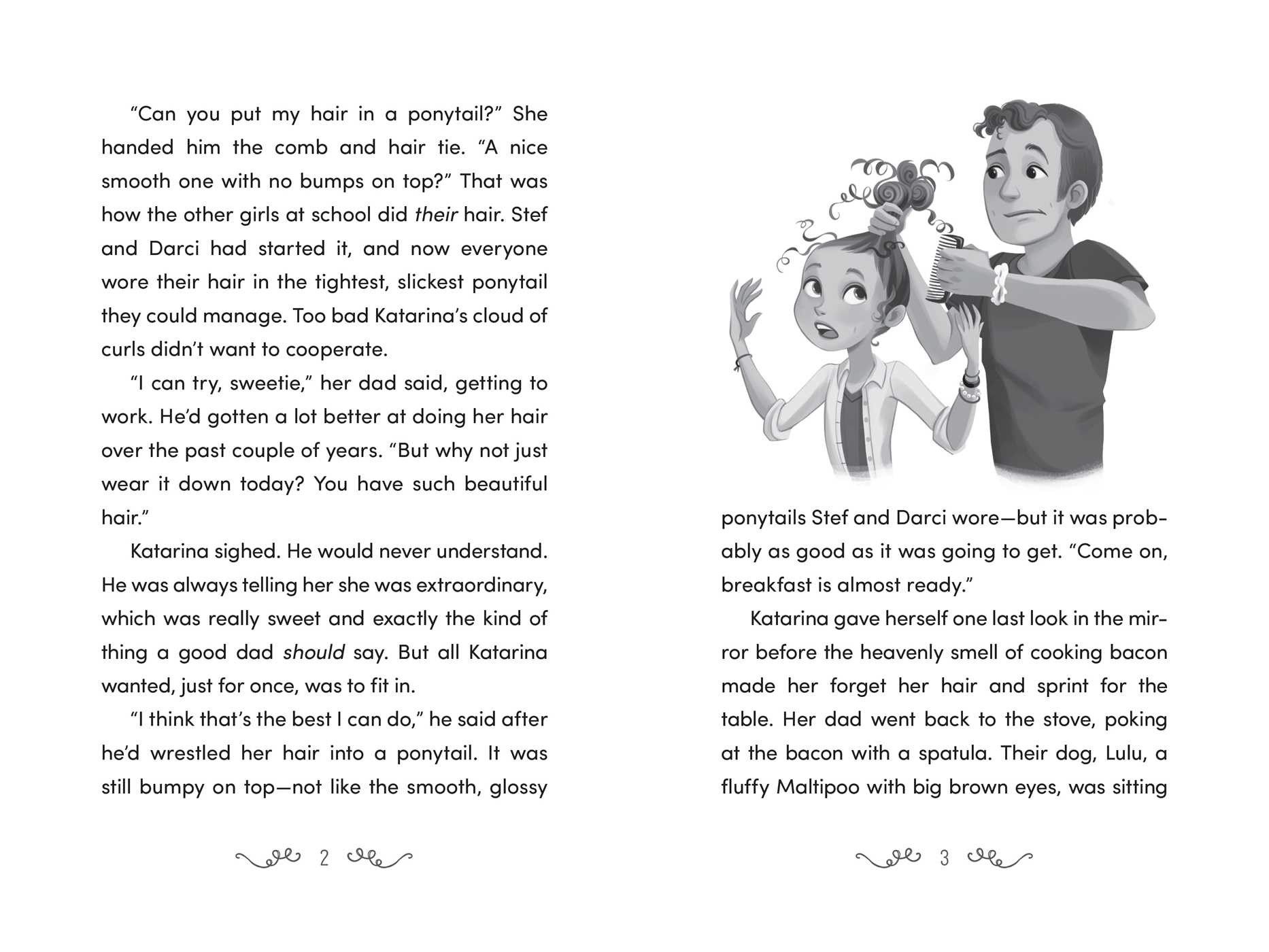 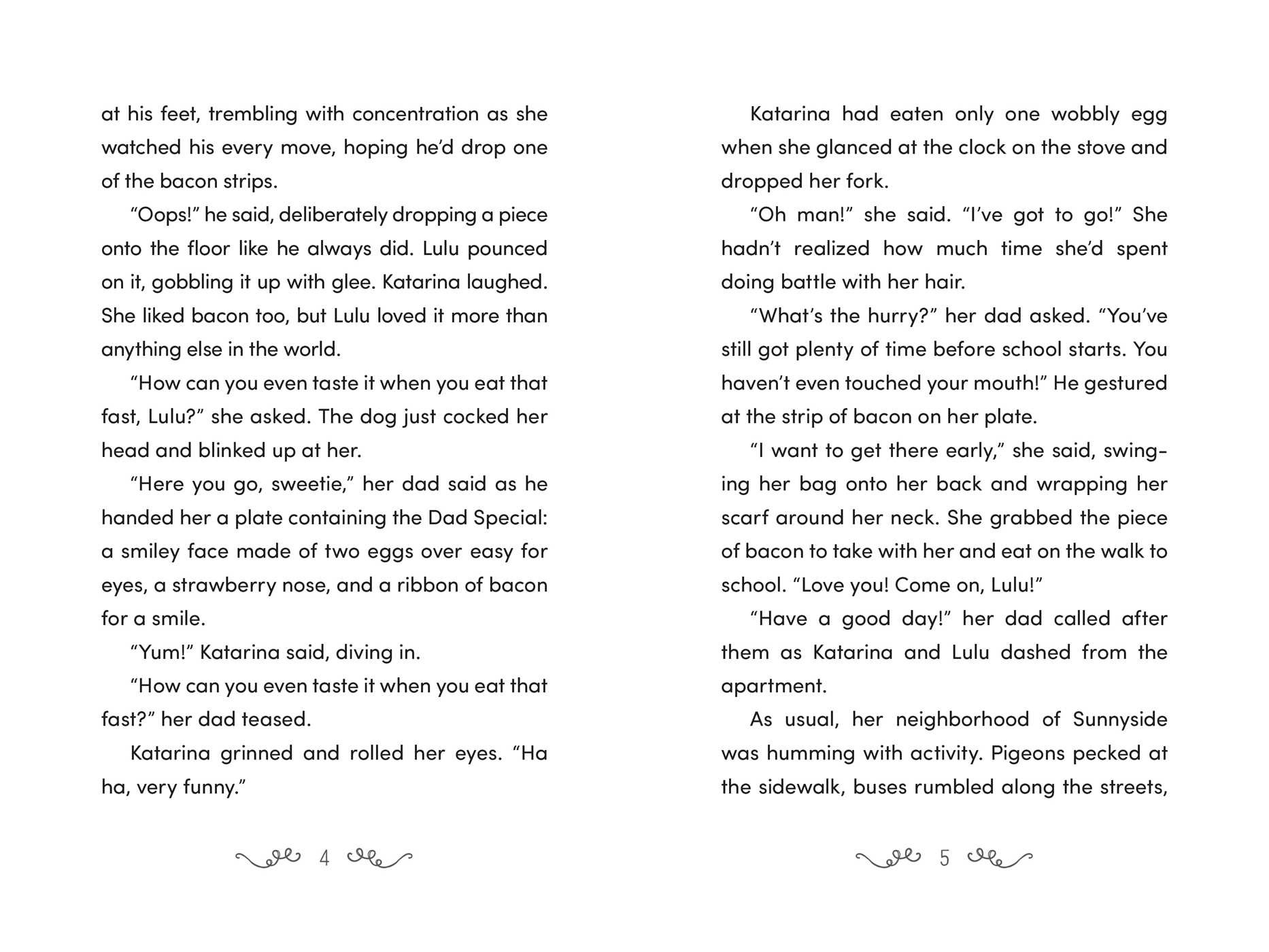 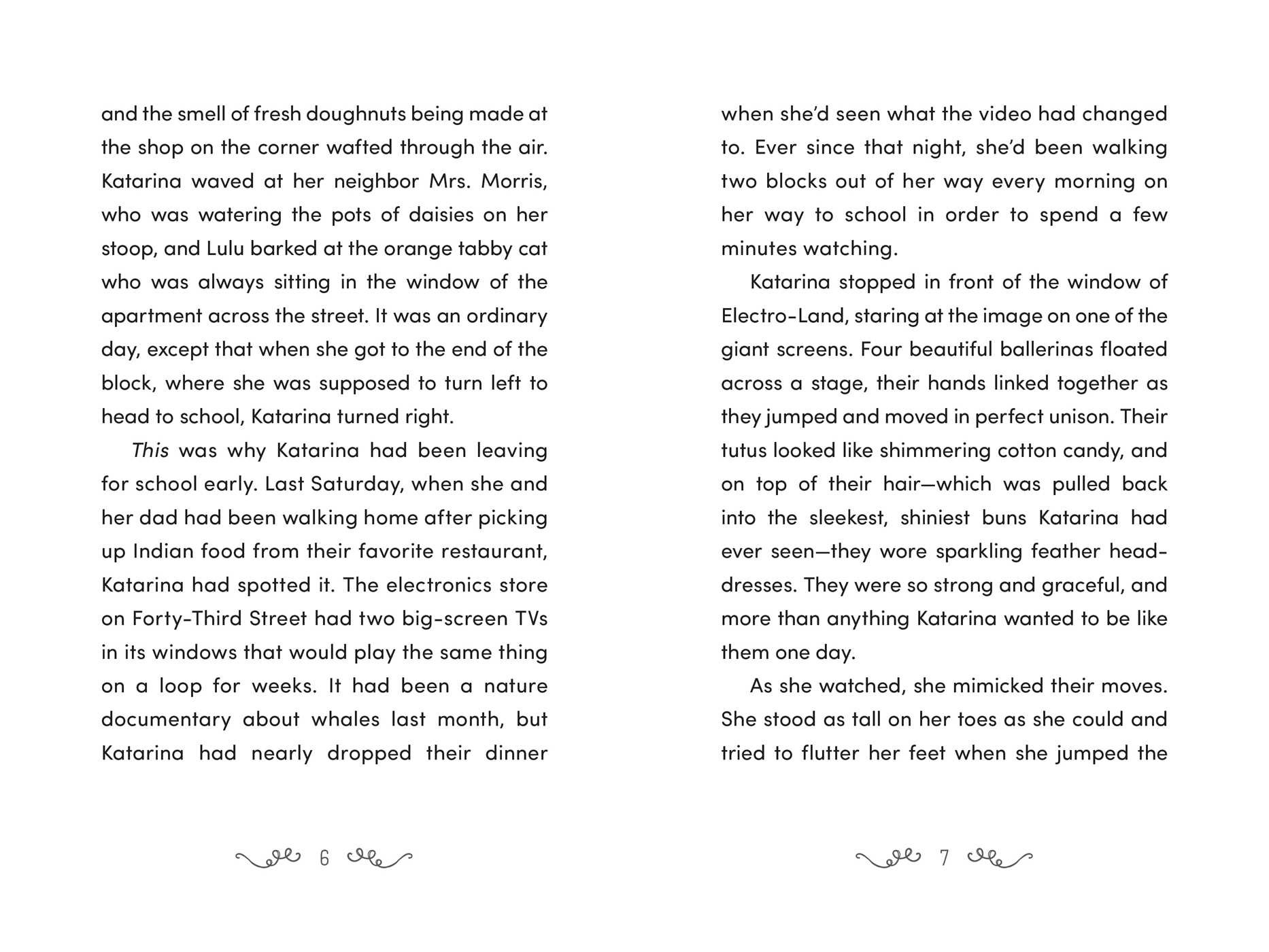 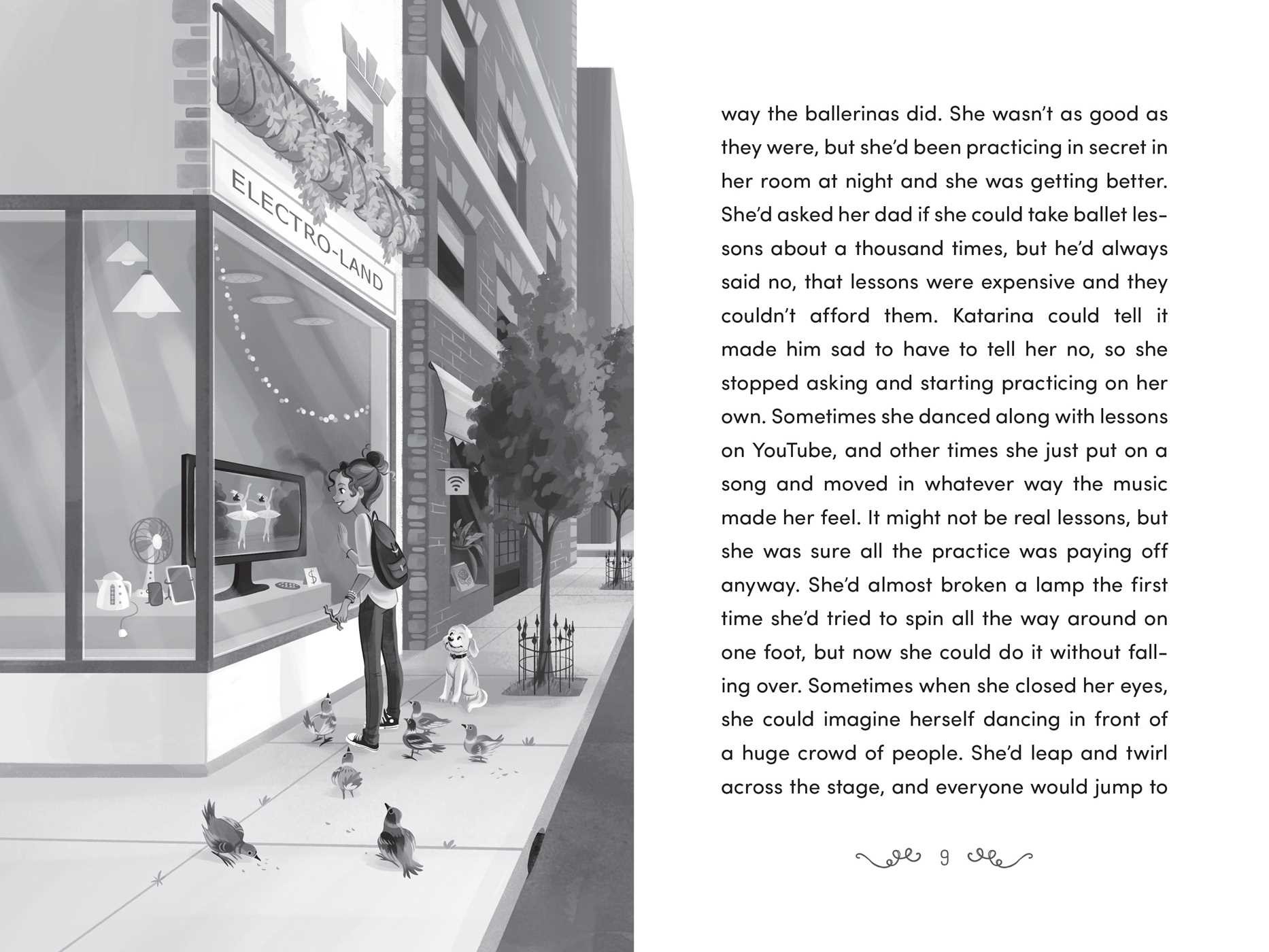 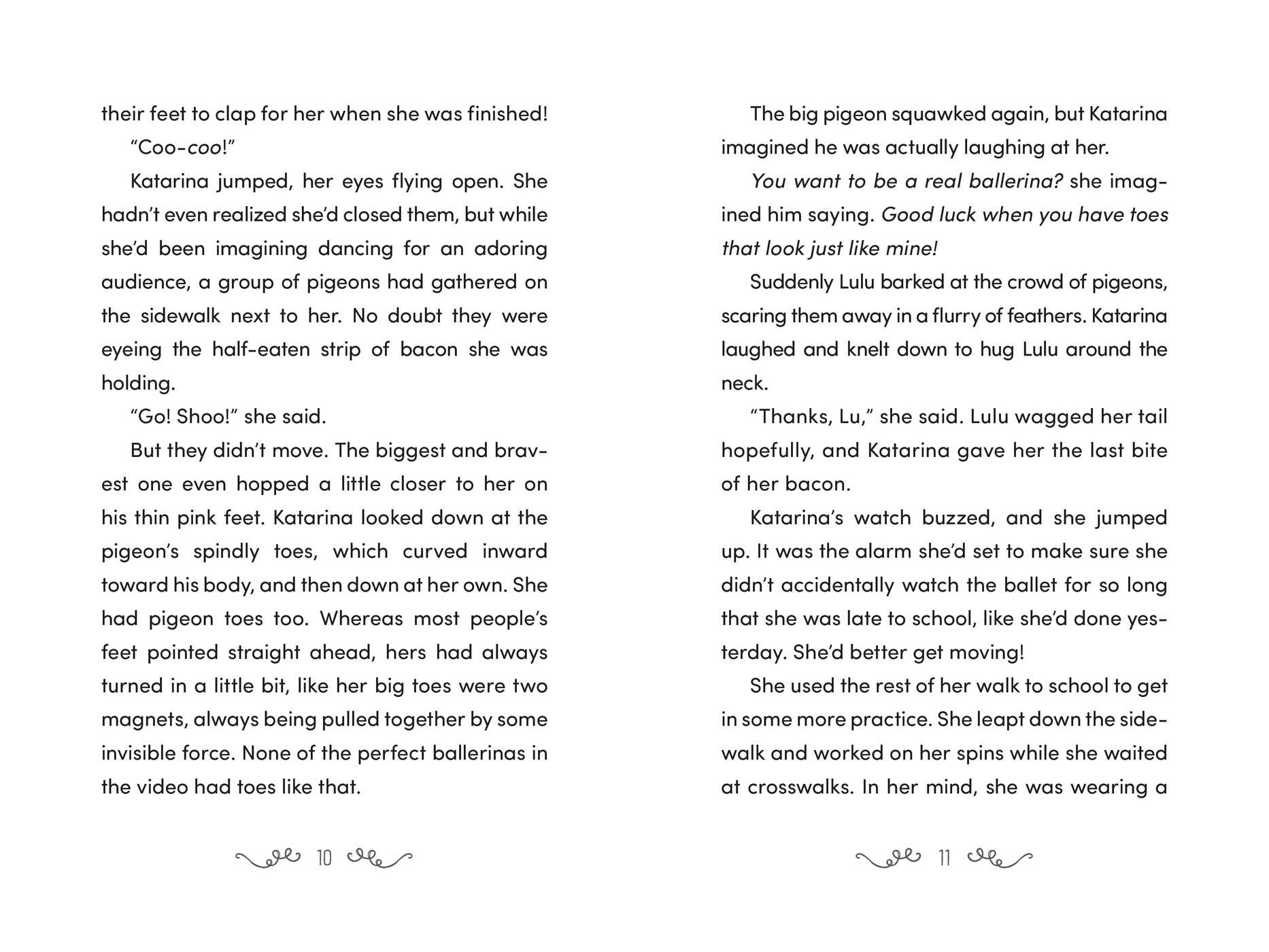 Ten-year-old Katarina is a New York City girl through and through, but the buzz of the city drives her to feel that she is meant for more than her ordinary day to day routine. Her big dream? To become a prima ballerina.

With the help of a few new friends, Katarina finally puts on her first pair of ballet shoes and she’s more than determined to make it work. But her feet don’t quite move the way she would like them to, the twirls and spins make her dizzy, and her classmates aren’t exactly welcoming. When the head of the dance studio announces that there will be a competition to earn a spot in an upcoming international dance camp, Katarina knows this could be her big chance to make her dancer dreams come true. Does this tiny dancer have what it takes to stand out in the ballet world of blending in?

Chapter 1
“DAD!” KATARINA CRIED. She’d been battling her hair for so long that her arms were starting to go numb from holding them over her head. No matter what she did, she couldn’t get her curls under control. “I need your help!”

“Never fear, Dad is here!” he said in the deep, silly superhero voice of his that always made Katarina laugh. He squeezed into the tiny bathroom behind her and kissed the top of her head. “What’s up, buttercup?”

“Can you put my hair in a ponytail?” She handed him the comb and hair tie. “A nice smooth one with no bumps on top?” That was how the other girls at school did their hair. Stef and Darci had started it, and now everyone wore their hair in the tightest, slickest ponytail they could manage. Too bad Katarina’s cloud of curls didn’t want to cooperate.

“I can try, sweetie,” her dad said, getting to work. He’d gotten a lot better at doing her hair over the past couple of years. “But why not just wear it down today? You have such beautiful hair.”

Katarina sighed. He would never understand. He was always telling her she was extraordinary, which was really sweet and exactly the kind of thing a good dad should say. But all Katarina wanted, just for once, was to fit in.

“I think that’s the best I can do,” he said after he’d wrestled her hair into a ponytail. It was still bumpy on top—not like the smooth, glossy ponytails Stef and Darci wore—but it was probably as good as it was going to get. “Come on, breakfast is almost ready.”

Katarina gave herself one last look in the mirror before the heavenly smell of cooking bacon made her forget her hair and sprint for the table. Her dad went back to the stove, poking at the bacon with a spatula. Their dog, Lulu, a fluffy Maltipoo with big brown eyes, was sitting at his feet, trembling with concentration as she watched his every move, hoping he’d drop one of the bacon strips.

“Oops!” he said, deliberately dropping a piece onto the floor like he always did. Lulu pounced on it, gobbling it up with glee. Katarina laughed. She liked bacon too, but Lulu loved it more than anything else in the world.

“How can you even taste it when you eat that fast, Lulu?” she asked. The dog just cocked her head and blinked up at her.

“Here you go, sweetie,” her dad said as he handed her a plate containing the Dad Special: a smiley face made of two eggs over easy for eyes, a strawberry nose, and a ribbon of bacon for a smile.

“How can you even taste it when you eat that fast?” her dad teased.

Katarina had eaten only one wobbly egg when she glanced at the clock on the stove and dropped her fork.

“Oh man!” she said. “I’ve got to go!” She hadn’t realized how much time she’d spent doing battle with her hair.

“What’s the hurry?” her dad asked. “You’ve still got plenty of time before school starts. You haven’t even touched your mouth!” He gestured at the strip of bacon on her plate.

“I want to get there early,” she said, swinging her bag onto her back and wrapping her scarf around her neck. She grabbed the piece of bacon to take with her and eat on the walk to school. “Love you! Come on, Lulu!”

“Have a good day!” her dad called after them as Katarina and Lulu dashed from the apartment.

As usual, her neighborhood of Sunnyside was humming with activity. Pigeons pecked at the sidewalk, buses rumbled along the streets, and the smell of fresh doughnuts being made at the shop on the corner wafted through the air. Katarina waved at her neighbor Mrs. Morris, who was watering the pots of daisies on her stoop, and Lulu barked at the orange tabby cat who was always sitting in the window of the apartment across the street. It was an ordinary day, except that when she got to the end of the block, where she was supposed to turn left to head to school, Katarina turned right.

This was why Katarina had been leaving for school early. Last Saturday, when she and her dad had been walking home after picking up Indian food from their favorite restaurant, Katarina had spotted it. The electronics store on Forty-Third Street had two big-screen TVs in its windows that would play the same thing on a loop for weeks. It had been a nature documentary about whales last month, but Katarina had nearly dropped their dinner when she’d seen what the video had changed to. Ever since that night, she’d been walking two blocks out of her way every morning on her way to school in order to spend a few minutes watching.

Katarina stopped in front of the window of Electro-Land, staring at the image on one of the giant screens. Four beautiful ballerinas floated across a stage, their hands linked together as they jumped and moved in perfect unison. Their tutus looked like shimmering cotton candy, and on top of their hair—which was pulled back into the sleekest, shiniest buns Katarina had ever seen—they wore sparkling feather headdresses. They were so strong and graceful, and more than anything Katarina wanted to be like them one day. 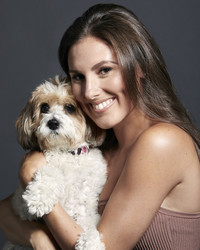 Tiler Peck is an international ballerina and has been a principal dancer with the New York City Ballet since 2009. She has been seen on Broadway in On the Town and The Music Man and originated the role of Marie in The Kennedy Center’s production of Little Dancer, alongside Kyle Harris. Ms. Peck performed for President Obama at the 2012 and 2014 Kennedy Center Honors. Ms. Peck has guested on Dancing with the Stars twice, and recently appeared on Julie Andrews’s Netflix series, Julie’s Greenroom. She is a recipient of the 2013 Princess Grace Statue Award and was named one of Forbes 30 under 30 in Hollywood/Entertainment. Most recently, she was the first woman to curate three performances titled Ballet Now at the Los Angeles Music Center and is the subject of a new documentary directed by Steven Cantor and produced by Elisabeth Moss for Hulu. She lives in New York City with her dog Cali. To learn more about Tiler, follow her on all social media platforms @TilerPeck. 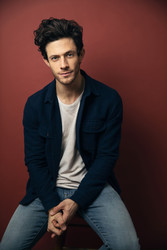 Kyle Harris is an actor in New York City. He recently starred in Freeform’s hit series Stitchers for three seasons and has appeared on Broadway in The Inheritance and Sondheim on Sondheim. Kyle toured the country as Tony in the Broadway National Tour of West Side Story and starred opposite Tiler Peck in the Broadway bound musical, Little Dancer at the Kennedy Center in Washington, DC. Kyle has also appeared on The Carrie Diaries and Beauty and the Beast on The CW, HBO’s High Maintenance, NBC’s The Blacklist Redemption, and God Friended Me on CBS. He has a BFA in musical theater from the University of Arizona and is the son of a second-grade teacher. If it weren’t for his mother introducing him to children’s books at a young age, he knows he wouldn’t be as well rounded and successful in the arts as he is today. To learn more about Kyle, follow him on all social media platforms @KyleHarris.

Sumi Collina is a magenta-haired illustrator based in Italy. She’s been creating since the moment she decided that drawing was better than bruising her knees while playing with the other kids. She worked as a pixel artist for three dress-up websites before moving to Rome to study illustration. Sumi now works freelance, illustrating children’s books, proposal scenes for young couples (again, lots of bruised knees), and card games. She now lives with a family of three very rustic dogs. As a dog owner, she is very passionate towards donating towards animals in need around the world.