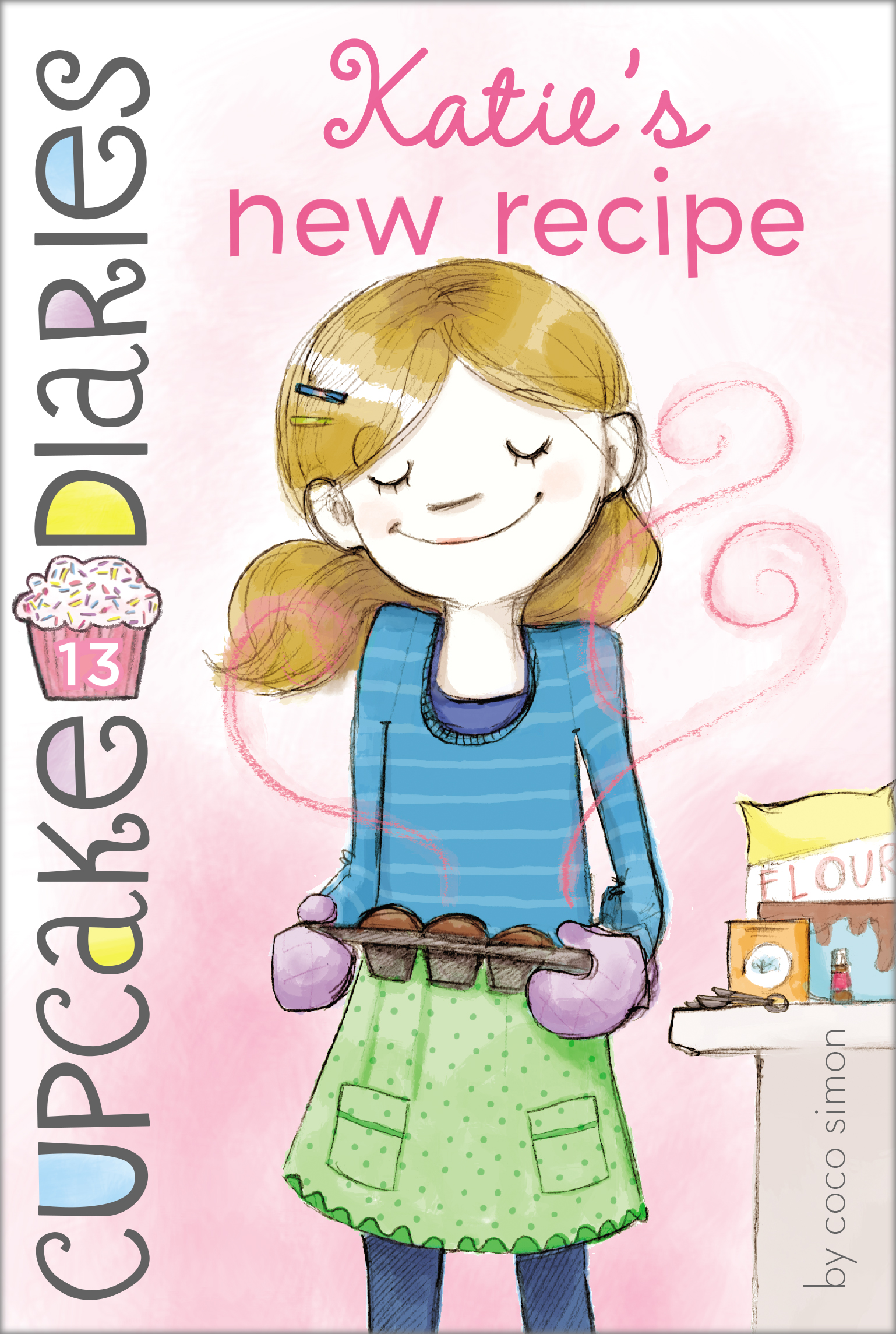 Katie’s long-lost father is finally reaching out—but is she ready for the reunion?

For as long as Katie can remember, it’s just been her and her mom. But that’s about to change. First her mom gets a boyfriend. And then Katie gets an email from her dad, whom she’s never met, saying he wants to get together. Katie’s not sure she’s ready for so much change in her life. With so much happening at once, Katie’s counting on her friends in the Cupcake Club to help her find the sweet side of what seems like a sticky situation.

I started to sweat as the adorable five-year-old in front of me looked up with pleading eyes. I knelt down and waved a round helium balloon in front of his face.

“It’s not the kind of balloon that you can make into animals,” I said, using my sweetest voice. “It’s just a regular, fun, yellow balloon, to match the cupcakes! See?”

I pointed to the cupcake table across the small yard, where my friends Alexis and Emma were busy placing dozens of yellow and green cupcakes on matching paper plates.

Panicked, I turned to my best friend, Mia, who was filling balloons behind me.

I pointed to the sobbing boy. “He wants a dog-shape balloon. I don’t know what to do.”

Mia quickly retrieved a black marker from her bag under a table and took the balloon from my hand. The marker squeaked as she drew a cute doggy face on the balloon, complete with droopy ears and a tongue sticking out. Thank goodness for a friend who can draw!

She handed it to the boy. “How’s this?” she asked.

I let out a sigh. “Mia to the rescue! Thank you. I knew this wasn’t going to be easy. Running a party for a bunch of five-year-olds? It’s much easier when we bake the cupcakes, serve the cupcakes, and then get out.”

A while ago, my friends and I had started a Cupcake Club. We’d turned it into a pretty successful business, baking cupcakes for all kinds of parties and events.

“It’s like Alexis said, it’s healthy to branch out,” Mia pointed out. “We’re making a lot more money by running the games and activities.”

I gazed around the yard. We had worked hard on this cupcake-themed party for a five-year-old girl named Madison. Last night we were up late baking cupcakes in Madison’s favorite colors, yellow and green. This morning we got up early (which I never like to do on a Saturday) to set things up. We had a table where the kids could decorate their own cupcakes.

Later, we were going to set up the stuff for the games. We took regular party games and cupcaketized them. You know, instead of Hot Potato, we were going to play Pass the Cupcake. And instead of a donkey, kids could pin a cherry on top of a giant picture of a cupcake. It was going to be fun, but it was definitely a lot of work.

“Well, money isn’t everything,” I declared. “If Alexis wants us to do this stuff so bad, she can come over here and make balloons. I’m going to go work at the cupcake table. At least I know what I’m doing there.”

“Aw, come on, Katie, balloons are fun!” Mia said, bopping me over the head with a green one.

I stuck my tongue out at her. “But crying kids are not! I’ll see you later.”

I walked across the room to the cupcake-decorating table.

Alexis nodded, her wavy red hair bouncing on her shoulders. “No problem. There’s not much more setting up to do. Mrs. Delfino said that the kids are having pizza in a minute, and then we’re going to play some games before we do the cupcake thing.”

Alexis walked away, and I took her place behind the table, next to Emma, who really loves dressing up for any event. She wore a light yellow shirt with a short green skirt that matched the cupcakes perfectly. A yellow headband with tiny green flowers held back her straight, blond hair. I had tried to get in the party spirit too, with a yellow T-shirt and green sneakers.

“I think it’s because I’m an only child,” I admitted. “I don’t know how to deal with little kids.”

“That’s not true. You’re so great with Jake,” Emma said. Jake is her six-year-old brother. “He adores you!”

“That’s different,” I protested. “Jake is only one kid. This is, like, a hundred!”

Emma laughed. “It’s only sixteen. But I know what you mean. When Jake’s friends are over, it can be too much sometimes.”

As we spoke, a woman with curly brown hair stepped into the yard.

“Okay, everybody! It’s pizza time! Everyone inside!”

The kids cheered and raced inside, accompanied by the moms who had decided to stay for the party. Alexis approached the cupcake table.

“We should set up the games while everyone eats,” she suggested. “Then we’ll be ready when they come back out.”

“Good idea,” Emma agreed. We started to set things up for the games, and after only about ten minutes, the kids came racing back outside.

I shook my head. “Back already? What did they drink with their pizza? Rocket fuel?”

Mrs. Delfino smiled at us apologetically. “I hope you don’t mind.”

“Of course not,” Alexis said crisply. When she’s on a job, she’s all business. “We’re ready.”

“Come on, kids!” Emma said loudly. “Who wants to play Pass the Cupcake?”

Sixteen hands flew into the air at once. “Meeeee!”

I kind of got into it when we played the games. We played Pass the Cupcake first. Mia had sewn a cute cupcake out of felt, and the kids sat in a circle and passed it around when the music played. When the music stopped, the kid holding the cupcake had to leave the circle.

It went pretty well until one little girl started crying when she got out. I almost panicked again. But then I had an idea. I grabbed the girl’s hands.

After that, we played Pin the Cherry on the Cupcake using a beautiful poster of a cupcake Mia had drawn, and big cherries cut out of paper. Then we did cupcake relay races, where the runners had to balance a cupcake on the end of a spatula while they were running (instead of the usual egg on a spoon). There was a lot of icing on the grass, but the kids seemed to really like it.

“Great job, everybody!” Alexis called out. “And now it’s time to decorate cupcakes. Madison, since you’re the birthday girl, you get to go first.”

“Yay!” Madison’s big brown eyes shone with excitement as she ran to the cupcake table. Her party guests were excited too, and they quickly crowded around her.

“One at a time! One at a time!” Alexis yelled, but the five-year-olds ignored her, swarming around the table and grabbing the cupcakes, sprinkles, and candy toppings.

“Hey! There are spoons for that!” Alexis scolded.

Mia, Emma, and I quickly jumped in to help. I picked up a spoon and tried to show one blond-haired boy how to gently sprinkle some edible green glitter on to his cupcake. He took the spoon from me, dipped it in the glitter . . . and then threw the glitter all over the little girl next to him!

The girl looked stunned. She brushed the green glitter off her face . . . and then started to cry.

“Oh no. Not again,” I said, moaning. I didn’t think dancing was going to help this one. “We’ve got another code red!”

But everyone was too busy to come to my rescue. Emma was wiping off frosting from Madison’s face, Mia was patiently creating a smiley face made out of candies on another girl’s cupcake, and Alexis was marching up and down the table, trying to regain order.

“Icing goes on the cupcake, not on your hands!” she shouted. “And, Leonard, do not put the sprinkle spoon in your mouth!”

Within minutes, the kids were more decorated than the cupcakes.

Mrs. Delfino approached the table, looking flustered. “Oh dear! This is quite a mess!”

We stopped and looked at one another. Our client did not look happy—and that was bad for business.

Luckily, Emma had thought to pack a big tub of wet wipes. I got out the box and gave one to each kid.

“Okay, now it’s time to clean our hands, hands, hands,” I instructed in a singsong voice, and luckily, the kids all played along. Next, I had them clean their faces, elbows, and even their knees (that’s how messy everyone was!). In the end we had one big pile of messy wet wipes and one yard full of clean kids.

“It’s time to sing the birthday song!” Mrs. Delfino announced, and as the kids followed her inside, we collapsed on the grassy lawn, exhausted.

“Katie, you were so good with the kids!” Mia said.

“Yeah, I’ll have to remember that clean-up game for Jake,” Emma said.

I frowned. “Well, thanks, but that was still awful. Doesn’t this prove we should stick to just cupcakes from now on?”

“Absolutely not,” Alexis said. “It just means we need to perfect our plan. Until that big cupcake mess, everything was going really well.”

“Definitely,” said Emma. “And let’s not forget the extra money. It’s worth it.”

I sighed. “I guess you’re right. You know me. I don’t really like changing the way I do things. In fifth grade, I wore the same pair of purple sneakers every day for a year. My mother said she had to peel them off my feet, literally.”

“Fine,” I said. “But next time, let’s leave the icing on the cupcakes, okay?”
Coco Simon