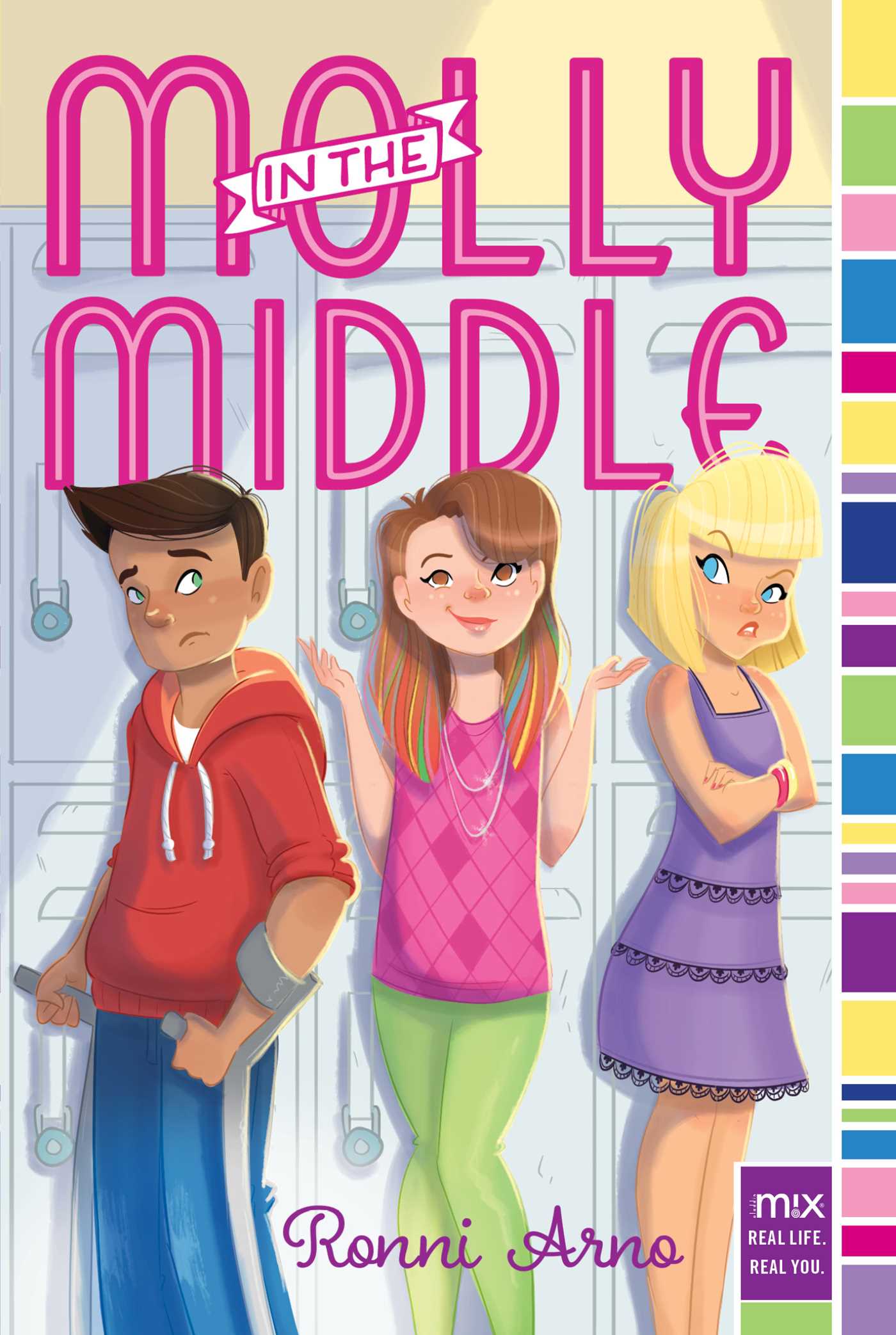 Molly in the Middle

Part of mix
By Ronni Arno
PRICE MAY VARY BY RETAILER

A girl finds herself in the middle of a big decision—follow the crowd or follow her heart—in this hilarious M!X novel.

But her new, outlandish ways put her in a different middle altogether. She now finds herself in the middle of her new, popular group of friends, who think the New Molly is amazing and bold, while her old BFF, Kellan thinks the New Molly is mean and aloof and headed for trouble. What’s worse, Kellan doesn’t hide his feelings. Faced with a probable future in a wheelchair, Kellan doesn’t understand why Molly would risk getting in trouble just to be popular. So when Molly has to choose between going to the year’s biggest party with her new pals, or participating in the Muscular Dystrophy Walk with Kellan, she’s stuck in the middle once again. Can Molly reconcile the Old Molly with New Molly—and figure out the best way to make her mark?

Molly in the Middle chapter  1
IT’S A NORMAL WEDNESDAY MORNING, and I do what I always do on normal Wednesday mornings. I sit at the kitchen table eating my Rice Krispies. Not on the couch while watching TV, like Coco does. Not standing at the counter while texting, like Eliza does. But at the table. Where one is supposed to eat one’s breakfast.

As I bring the spoon up to my mouth, I listen for the snap-crackle-pop of my cereal. I’ve been eating Rice Krispies for breakfast every day since I had teeth, and the familiar sounds prepare me for my daily routine.

Dad is muttering something to the coffeepot while Mom is stuffing papers into her briefcase. It’s an average, everyday, run-of-the-mill Wednesday.

“Darn it,” Eliza screams, jumping back from the kitchen counter, where she pushes her cereal bowl away from her.

“No need to yell, Eliza,” Mom says, barely looking up from her briefcase.

“Well, what do you expect? I spilled milk all over my shirt.” Eliza unrolls half of the paper towels on the roll hanging from the wall and wipes furiously at her stomach. “Oh, forget it.” She throws the paper towels down. “I’m going to have to change.”

“You’d better hurry up,” Dad says. “We have to leave in five minutes.”

“Five minutes?” Coco squeals. “My show won’t be over by then.”

“But I’ll miss the best part.” Coco slams her small fist down in her lap.

“I can’t believe this,” Eliza says as she storms up the steps. “How am I going to get ready all over again in five minutes?”

Dad gives Mom “the look.” They’ve been working on it since Eliza was my age. I think they’ve perfected it in the last four years.

I finish my cereal, rinse my bowl, and put it neatly in the dishwasher.

“Let’s go, kids,” Dad calls as he pours his coffee into a to-go mug.

“Now.” Dad grabs his keys off the kitchen table, then stands at the bottom of the steps. “Eliza, we’re leaving!”

“I’m not ready!” Eliza calls from upstairs. I hear the eye roll in her voice.

Dad looks at Mom again, but she just shrugs.

I take my backpack off the hook and sling it onto my shoulder. I’m the first one ready, as usual. Coco clicks the television off, but she leaves her cereal bowl in the middle of the floor. No wonder we’re running low on bowls. I’ll bet she has a collection under the couch. For such a little kid, she sure makes a huge mess.

Finally, Eliza comes down the steps. I do a double take when I see her. I shake my head. This isn’t going to be good.

“Eliza,” Dad snaps. “What do you think you’re wearing?”

“What?” Eliza looks down at herself.

Mom joins us at the bottom of the steps.

“Eliza, you can’t wear that to school.” Mom uses her lawyer voice. The one you can’t argue with.

“Why not?” Apparently, Eliza didn’t get the memo about not arguing with Mom’s lawyer voice.

“First of all”—Mom’s tone remains calm—“it’s against the dress code and they’ll make you change.”

“And second of all?” Eliza’s hands are on her hips.

“Second of all,” Mom begins, “if you walk out of the house like that, I’ll ground you until you’re thirty-two.”

Eliza turns on her (very high) heels and stomps back up the steps, muttering about the absolute unfairness of life.

“That’s how you have to deal with her,” Mom tells Dad. She gives Coco and me a quick hug, grabs her briefcase, and bolts out the door.

Dad looks at his watch and sighs. It’s nice that they drive us to school in the mornings since the bus comes so early, but sometimes I think getting up before the sun and taking the bus would just be easier. I take the bus in the afternoon because my parents are working, and it’s not bad. It’s more peaceful than being home sometimes.

I know Eliza will take forever to change, so I figure I’ll clean up the mess that Coco left in the living room. I hang my backpack up, then head to the couch to deal with Coco’s latest disaster. I grab her bowl (which is on its side, with white milk dribbling out onto the burgundy area rug), spoon, juice cup, and crumpled-up napkin (at least she used a napkin) and bring it all into the kitchen.

I run the water in the kitchen sink until it’s hot. I soap up the sponge and take care of Coco’s sticky mess. It feels good to put my hands under the running water—it’s calming somehow. I close my eyes and let the water wash away the insanity that is my family’s routine in the morning.

Of every day of my life.

For the past twelve years.

When I feel Zen enough, I shut the water off and dry my hands. I take my backpack off the hook and look around the corner into the hallway. Nobody’s there.

“Eliza?” I yell up the stairs.

They must have already gone to the car. I guess I didn’t hear them with the water running. A slight panic tugs at my stomach—I don’t want to be the reason we’re late. I run down the steps to the garage, and when I get there, I see it’s empty. Maybe the car’s outside.

I bolt back up the steps and push open the front door. As soon as I open it, I see Dad’s car. It’s pulling out of our driveway, onto the street.

My mouth opens, but no words come out. I just stand there, with my jaw practically touching the floor.

They left without me.
Ronni Arno

Ronni Arno Blaisdell is the author of Ruby Reinvented. She has written for several magazines, blogs, and websites. In a previous life she worked as a publicist in Hollywood, and eventually built a home in Maine. She is a keen SCBWI member and contributor to the KidLiterati.com blog.

Molly in the Middle

Part of mix
By Ronni Arno
PRICE MAY VARY BY RETAILER