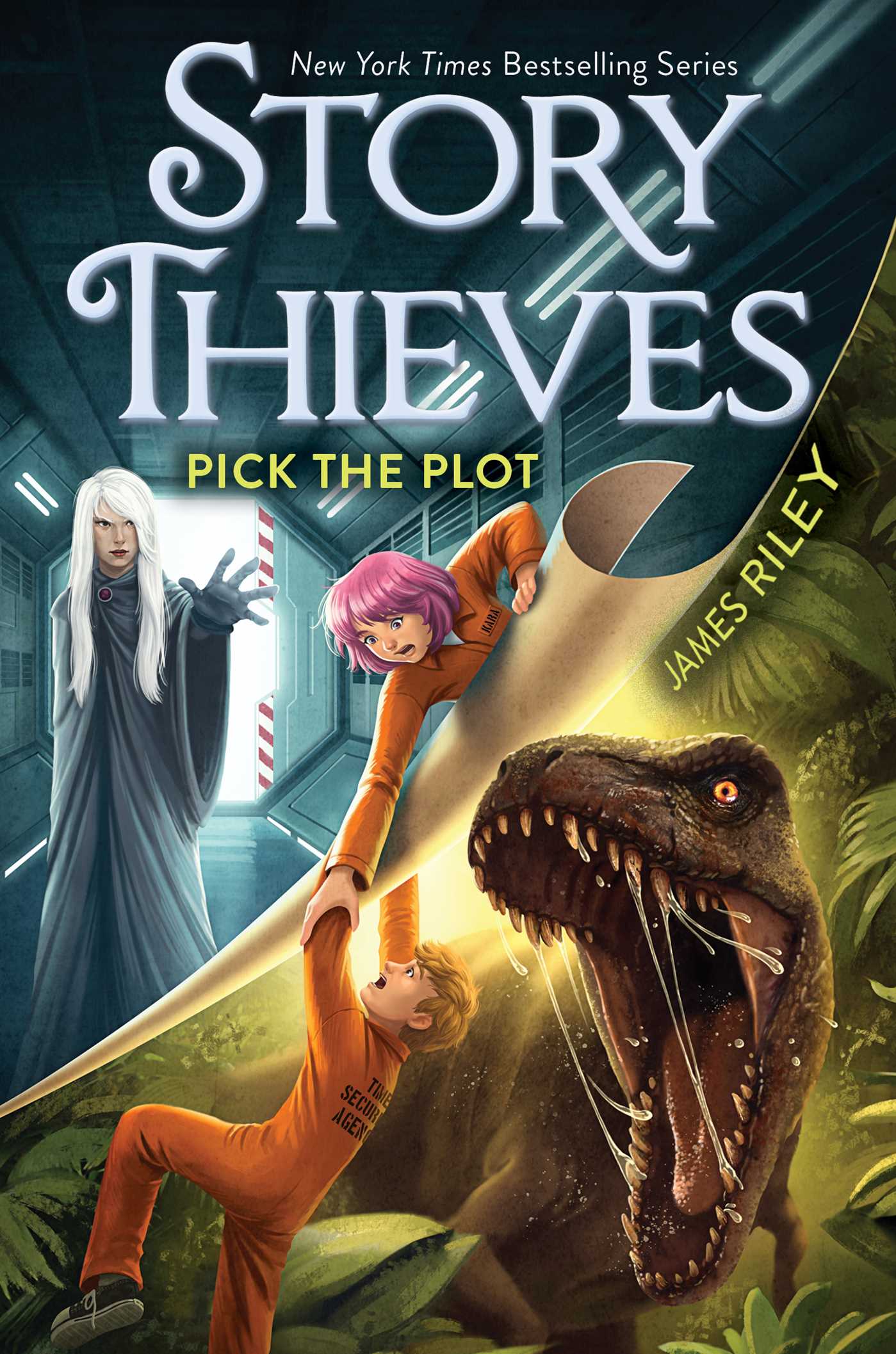 Readers choose what happens when Owen finds himself stuck in a Pick Your Own Plot story, in this fourth book in the New York Times bestselling series, Story Thieves—which was called a “fast-paced, action-packed tale” by School Library Journal—from the author of the Half Upon a Time trilogy.

Being able to jump into books used to seem like the greatest thing in the world to Owen Conners. But now Owen’s trapped in a time travel book where readers—that would be you—decide how the story goes.

As if that weren’t enough, Owen’s also stuck in a prison for time criminals in a prehistoric era. He’s surrounded by bizarre fellow prisoners, including Kara Dox. How does Kara recognize Owen if they’ve never met before? She seems to think they’re old friends, but that can’t be possible. Still, Kara might just be the only chance Owen has to escape. And he has to find a way out to save his friend Bethany, who’s still in grave danger. Because unless Owen can stop him, Nobody is going to split Bethany into two, separating the fictional and nonfictional worlds forever.

Will Owen be able to convince you, the reader, to help him find his way back to Bethany? Or will you feed him to dinosaurs just to teach him a lesson? It’s all up to you when you Pick the Plot.

Pick the Plot
A loud noise startled Owen awake, and he bolted up in fright, finding himself in darkness. The last few days came crashing back, and he squeezed his eyes shut. Wherever he was, he didn’t want to know. There were too many bad possibilities and not nearly enough good ones. The bad ones:

1. He was trapped in a book. The last he’d seen Bethany, the Dark had defeated her. And then Nobody had thrown Owen into a Pick the Plot book. That meant Owen could be in a story where he had zero control over his own choices, with readers deciding for him. This was the worst of the bad possibilities.

2. He was back home, but Bethany was still missing. Maybe the whole Pick the Plot thing had been Nobody trying to scare him, and instead of a book, Nobody had sent Owen back to the nonfictional world. So he was now actually lying in his own bed, which was good . . . but there’d be no way he could help Bethany. Slightly less worse, only because at least he was safe in his own bed.

3. He was back home, with Bethany still missing . . . and Nobody had completely separated the nonfictional and fictional worlds. Depending on what that meant, this might actually be the worst option.

As Owen had learned while stuck in a sort of behind-the-scenes comic book land, Nobody had been trying to permanently separate the worlds, and Bethany was one of the last portals holding them together. So if Nobody had found Bethany, then split her in half like he’d said he was going to . . . what would happen? What if Owen opened his eyes and discovered a world without books, without movies, without anything made-up? Would that stuff all just disappear? And would the fictional people on the other side be okay too? Not to mention would Bethany be okay, split in half like that?

All in all, that was three good reasons not to open his eyes, right there. Owen squeezed them shut even harder, balling his hands into fists, before taking a deep breath, trying to calm down.

Just because the bad possibilities were awful didn’t mean there weren’t still good possibilities. He should list those off too, just to be fair:

1. The last few days had all been a bad, bad dream.

Okay, having only one good possibility wasn’t very encouraging. And things like this were never bad dreams. That was just lazy writing in books.

Owen slowly lay back down on the bed, purposely not paying attention to how scratchy this blanket was, and how his blanket at home was definitely not scratchy at all. C’mon, bad dream.

And then another loud, strange noise came from what felt like yards away, and Owen’s robotic heart began pounding. The sound had been a horrifying cross between a scream and a growl, and definitely wasn’t his fictional cat, Spike.

He clenched his fists tighter, still not opening his eyes. Maybe the sound had just been some dog that needed to go out! Or a cat fighting something bigger, like a . . . a tiger, or a truck! Not likely, but still possible! Either way, there was no proof that he was currently trapped in a terrible book where readers could control his whole life. Nope. No proof at all.

“I’m at home,” Owen whispered to himself. “Bethany’s at her house, and we’re both totally, completely fine. And soon Mom will be in to wake me up for school, because I slept through my alarm again, and she’ll yell at me for it, just like every morning.”

A louder, more guttural roar erupted from even closer, and the entire room shook with its power.

That was not his mom.

Owen dug his fingernails into his hands, determined not to open his eyes now, no matter what. “This isn’t happening,” he whispered. “I have to be dreaming. I’m going to wake up back home, and everything will be fine!”

SHOW OWEN WHO’S IN CHARGE. MAKE HIM GET OUT OF BED.

LET OWEN STAY IN BED FOR A BIT. HE SHOULD PROBABLY REST UP BEFORE THE CRAZINESS STARTS.

James Riley lives in Virginia. He is the New York Times bestselling author of the Half Upon a Time, Story Thieves, and Revenge of Magic series.