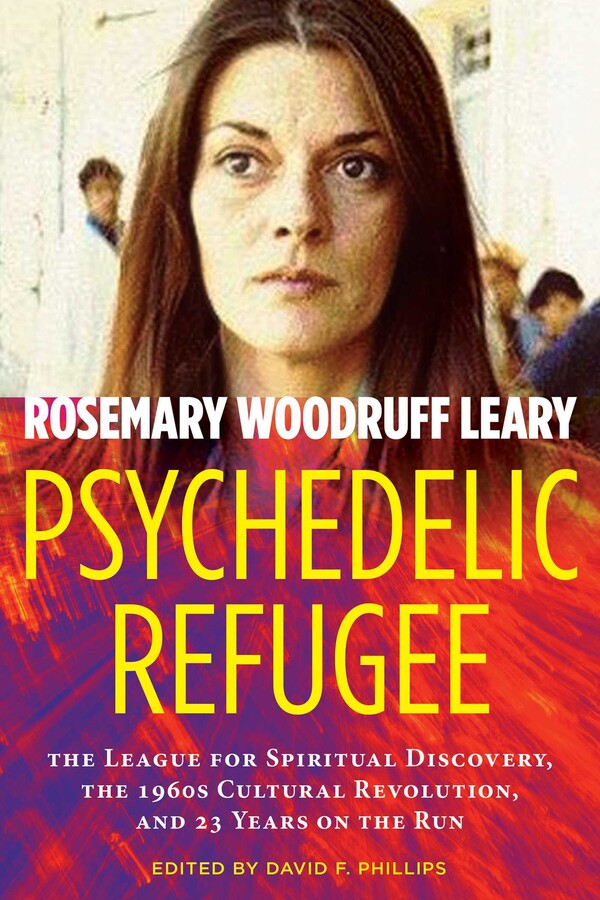 The League for Spiritual Discovery, the 1960s Cultural Revolution, and 23 Years on the Run

• Shares Rosemary’s early experimentation with psychedelics in the 1950s, her development through the psychedelic revolution of the 1960s, and her involvement, at first exciting but then heartbreaking, with Dr. Timothy Leary

• Describes her LSD trips with Leary, their time at the famous Millbrook estate, their experiences as fugitives abroad, including their captivity by the Black Panthers in Algeria, and Rosemary’s years on the run after she and Timothy separated

One of the original female psychedelic pioneers, Rosemary Woodruff Leary (1935-2002) began her psychedelic journey long before her relationship with Dr. Timothy Leary. In the 1950s, she moved to New York City where she became part of the city’s most advanced music, art, and literary circles and expanded her consciousness with psilocybin mushrooms and peyote. In 1964 she met two former Harvard professors who were experimenting with LSD, Timothy Leary and Ralph Metzner, who invited her to join them at the Millbrook estate in upstate New York. Once at Millbrook, Rosemary went on to become the wife--and accomplice--of the man Richard Nixon called “the most dangerous man in America.”

In this intimate memoir, Rosemary describes her LSD experiences and insights, her decades as a fugitive hiding both abroad and underground in America, and her encounters with many leaders of the cultural and psychedelic milieu of the 1960s. Compiled from Rosemary’s own letters and autobiographical writings archived among her papers at the New York Public Library, the memoir details Rosemary’s imprisonment for contempt of court, the Millbrook raid by G. Gordon Liddy, the tours with Timothy before his own arrest and imprisonment, and their time in exile following his sensational escape from a California prison. She describes their surreal and frightening captivity by the Black Panther Party in Algeria and their experiences as fugitives in Switzerland. She recounts her adventures and fears as a fugitive on five continents after her separation from Timothy in 1971.

While most accounts of the psychedelic revolution of the 1960s have been told by men, with this memoir we can now experience these events from the perspective of a woman who was at the center of the seismic cultural changes of that time.

LSD was still legal in New York in the summer of 1965. I didn’t know that then. I was busy with a band of acid gypsies. Travel-worn from defying the laws of gravity and economics, they said they were magicians and crashed amidst the antiques, drew crazy patterns on the prayer rug, dripped candle wax across the sheets, played Dylan slowed down, more mournful than he was at normal speed.

I watched New York dissolve till it got boring.

They left, all but one, a musician, more wounded than the rest. I liked his strong Indian face, remembering it from another lifetime, loving. Famed from another era, kept beautifully by an heiress, he gave up the music learned at Ben Webster’s knee but stuck to the needle and an expensive need for health spas and psychoanalysis. He was the epitome of graceful dissipation. Appreciating jazz and elegance as I did, I loved him at first sight.

Early in the summer we met again. He came to live with me, bringing music and madness. Dark rhythms stirred his veins. It was a grace junk gave him. I could not follow.

Tim fetched me in a borrowed Jeep. Running away from home—one black eye, patched jeans, a ripped sneaker—I was shy, being saved that way.

“What have you been doing all summer?” he asked.

“Dying by degrees of heat and madness.”

“I have a theory about death, would you like to hear it? Ecstasy comes to everyone at that moment. Dying is a merging with the life process. What do you think?”

“I don’t know; I really don’t believe that death is a way out. But lately I’ve found myself wishing this life would cease,” I replied.

“So have I, many a time. Let’s make an agreement, shall we?”

“What’s that smell?” The car was full of smoke.

“Open your window. I forgot the muffler’s broken; this was the only car working.”

The cool dark air banished the fumes, but the knocking grew louder.

“Where?” “Everywhere. Why didn’t you come to Millbrook when I asked you to?”

“I didn’t need rescuing then.”

When I’d met him at an art gallery opening in early June, I’d taken LSD alone earlier in the day. I was wonderfully happy, happy to be solitary, completely within myself, peaceful yet exhilarated. A sweet sensation. That evening Tim spoke of psychedelic art and the techniques of “audio-olfactory-visual alterations of consciousness.”

He was didactic, oracular, self-aggrandizing, and very amusing. Afterward we walked to the corner for a drink.

“You remind me of someone I once loved.”

“Let’s see.” I took from my pocket the small pane of two-way mirror an artist had given me, held it up between us. “My hair and your smile. My nose and your eyes. What do you see?”

“Good match.” He lit a cigarette. “Perhaps.” I lifted my glass to him.

He was exhilarating, like the first draft of pure oxygen after a trip in the dentist’s chair. There was the sense of having shared a most profound experience with him in some unremembered time. But I had to decline his invitation to Millbrook that weekend. He was married to a beautiful, blonde, highly paid model. And I’d found an eager musician.

Now escaping that failed love and a summer of sadness, I was on my way to Millbrook with Tim, rather than to California where I felt I ought to be. I wondered about the state of his marriage.

“You’ve more than one then?”

“Had, alas, those pleasures are now forbidden.”

“Will I find them in the attic behind a secret door?”

“Actually she’s with a Tibetan monk, of the second I rarely speak.”

“She killed herself on my 35th birthday.”

I looked at him, handsome profile, strong hands on the wheel. Keen, flame-colored eyes, a man once dark, now silver-haired and fair. “To love. You, I suppose.”

Full moon in Aquarius, August midnight. We turned through the gates, across the bridge, under a tunnel of trees. The windows of the large white house were lit with red and blue, a castle with towers surrounded by countless acres of woods, lakes, gardens and ruins. All the elements of myth and fancy were here and the master of it all, in a courtly way, opened the door. He led me up to the tower room. With a slow smile he left, descending the narrow stairs.

I woke to a soft summer day, sucking sweet white hoya blossoms from the window vine, forgetting my vow of solitude, remembering last night’s long, slow waves of his desire that came hurtling up the stairs. I had felt him all through the night, footsteps pounding the maze of corridors, bare feet echoing the final rounds. My dreams were of a restless man in scarlet robes in the chamber below. I wanted to know him if I could; he seemed wise.
Rosemary Woodruff Leary

Rosemary Woodruff Leary (1935-2002) was one of the great female psychedelic pioneers of the 1960s. She met Dr. Timothy Leary in 1964, becoming his psychonaut partner at the Millbrook estate and later his wife. After Timothy’s prison break in 1970, Rosemary fled with him to Algeria, beginning a years-long fugitive journey across four continents and nearly 25 years of life underground.

“The soul-spirit of Rosemary Woodru Leary permeates the pages of her memoir, Psychedelic Refugee. She surfed the crest of the very tides of life as a beautiful, innocent romantic, and the wake of her life journey triumphantly fed the fl owering of her true essence.”

“Rosemary Woodruff Leary lived a mythical life--not merely present at many of the defining moments in 60s and 70s psychedelic counterculture but helping to create themand we are lucky enough to get to travel through these times and spaces with her in this lovingly reworked memoir. Rosemary’s unerring commitment to knowing herself deeply--without taking herself too seriously--makes her a wonderful guide through these pages. I felt I had made a new friend by their close. Her principled commitment to living freely--yet never at the cost of sacrificing the freedom of others--inspires.”

“Rosemary Woodru Leary’s memoir is a herstorical treasure and a long overdue triumph for psychedelic feminism.”

“It is ripe time for acknowledging the contributions of the female lineage of early psychonauts to the psychedelic countercultural currents. David F. Phillips has restored Rosemary Leary’s authentic voice with great respect, diligence, and care so that it can tell us her own largerthan- life story of courage, adventures, and feminine values.”

– Maria Papaspyrou, MSc, coeditor of Psychedelic Mysteries of the Feminine

“Rosemary Woodruff Leary was one of the world’s great psychedelic pioneers. She worked throughout her life to educate people about the psychedelic experience and was instrumental in helping to orchestrate the cultural revolution of the Sixties. She did this at the expense of her personal freedom, which was compromised for a significant portion of her life. In a world where men often overshadow the accomplishments of women, Rosemary stands out as one of the most important psychedelic revolutionaries of our time--a brave and articulate heroine of highest integrity, sensitivity, and beaming intelligence. Interacting with many of the most influential cultural innovators of her time, she was not only at the center of all the action during the countercultural revolution of the 1960s--helping to orchestrate much of it behind the scenes--she was also an extraordinary writer, brilliantly recording her insightful observations. As a result, this book is at once an invaluable historical document and, although heartbreaking at times, a beautiful work of literature, a page-turning romance adventure story, and a spiritual inspiration. David F. Phillips did an extraordinary job at piecing this book together from numerous sources and reconstructing the memoir as Rosemary had intended it to be. Most highly recommended!”

“Psychedelic Refugee covers Rosemary’s intimate life with the charismatic Timothy Leary, her public life as a performer in his psychedelic roadshows, their harrowing arrests for marijuana and LSD, and her secret life as a primary player in his prison escape. She also tells the story of her years with Leary on the run in Algeria and Switzerland and her 23 years in hiding from the wrath of the American government for the act of freeing him from an unjust sentence. The Learys’ associations with the Castalia Foundation, the League for Spiritual Discovery, the Brotherhood of Eternal Love, the Weather Underground, and the international Black Panther Party are described in the author’s riveting firsthand account. This is the compelling untold story of an exceptional woman who was a pioneer of the psychedelic generation.”

– Michael Horowitz, coeditor of Moksha: Aldous Huxley’s Classic Writings on Psychedelics and the

The League for Spiritual Discovery, the 1960s Cultural Revolution, and 23 Years on the Run