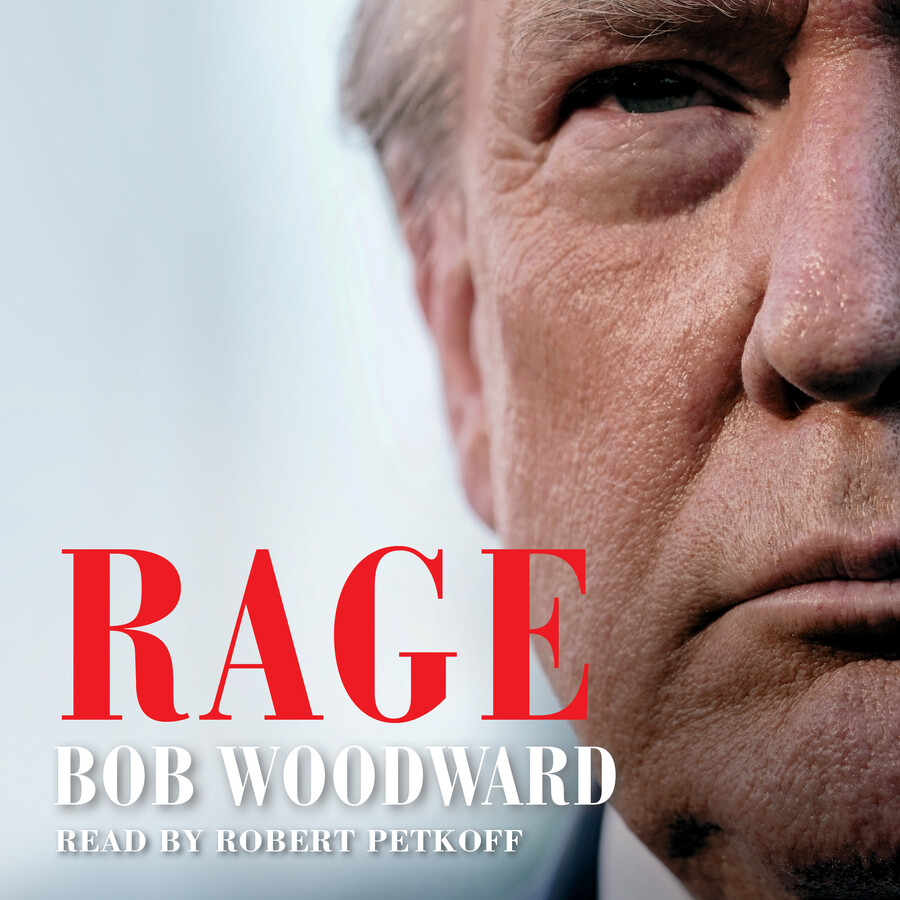 Woodward, the #1 international bestselling author of Fear: Trump in the White House, has uncovered the precise moment the president was warned that the Covid-19 epidemic would be the biggest national security threat to his presidency. In dramatic detail, Woodward takes readers into the Oval Office as Trump’s head pops up when he is told in January 2020 that the pandemic could reach the scale of the 1918 Spanish Flu that killed 675,000 Americans.

In 17 on-the-record interviews with Woodward over seven volatile months—an utterly vivid window into Trump’s mind—the president provides a self-portrait that is part denial and part combative interchange mixed with surprising moments of doubt as he glimpses the perils in the presidency and what he calls the “dynamite behind every door.”

At key decision points, Rage shows how Trump’s responses to the crises of 2020 were rooted in the instincts, habits and style he developed during his first three years as president.

Revisiting the earliest days of the Trump presidency, Rage reveals how Secretary of Defense James Mattis, Secretary of State Rex Tillerson and Director of National Intelligence Dan Coats struggled to keep the country safe as the president dismantled any semblance of collegial national security decision making.

Rage draws from hundreds of hours of interviews with firsthand witnesses as well as participants’ notes, emails, diaries, calendars and confidential documents.

Woodward obtained 25 never-seen personal letters exchanged between Trump and North Korean leader Kim Jong Un, who describes the bond between the two leaders as out of a “fantasy film.”

“Trump is the first candidate for president to launch an October surprise against himself. It’s as if Nixon sent the Nixon tapes to Woodward in an envelope by FedEx.”—Nick Confessore of the New York Times

“Even in a news landscape where it feels like nothing is shocking anymore, the first excerpts from the new Bob Woodward book still landed like a pair of hydrogen bombs.”—Vanity Fair

“Woodward’s prose offers readers that delicious, vicarious sense of being an insider, right there in the room with Bob, a witness to presidential sulks and boasts.”—Rosa Brooks, Washington Post

“We’ve had 45 presidents of the United States and we have had exactly one Bob Woodward. …He has written about nine consecutive presidents from Richard Nixon to Donald Trump.…Bob Woodward delivers the verdict of the first draft of history.”—Lawrence O’Donnell, MSNBC host

“[T]his revealing look at an embattled presidency facing a pandemic, racial unrest and a suffering economy…the book’s details have been explosive.”—USA Today

“Rage is essential reading for anyone hoping to understand Trump.”—Walter Clemons, New York Journal of Books

“It's okay. I mean it’s fine.”—President Donald J. Trump, when asked if Rage was accurate

“Damning…. Unlike most Trump tapes, Woodward’s actually tell us something new about the president, rather than just confirming what we think we already know.”—Michelle Goldberg, New York Times

“Rage may be Bob Woodward's most important book since All the President's Men.”—Peter Bergen, CNN

“Now, thanks to The Post’s Bob Woodward, we have learned the answer with regard to what history is likely to rank as perhaps the most consequential of all the falsehoods that Trump has uttered.”—Karen Tumulty, Washington Post

“Over nearly a half-century, no other person—including people wielding official power as legislators or prosecutors—has done as much to illuminate the modern presidency and help shape understanding of the nine people to hold the office during his career as Woodward, wielding only a journalist’s unofficial powers of curiosity, notepad, and recorder.”—John F. Harris, Politico

“The book possesses more than a patina of similarity to the famous televised interviews between David Frost and Richard Nixon, the president Woodward and Carl Bernstein brought down with their reporting on Watergate nearly a half-century ago.”—The Guardian

“At age 77, well over half a lifetime after he and Carl Bernstein took down President Richard Nixon with their reporting on Watergate, Woodward seems more willing—perhaps entitled—to put himself in the narrative and state his own views explicitly. In many ways, though, he’s the same Woodward. He’s an unparalleled amasser of secret documents, inside facts, dazzling scoops….What Woodward does is paint a picture of presidents dealing with power and crises.”—Fred Kaplan, Slate

“I don’t believe Mr. Woodward has ever written so clearly or with such urgency...”—Tony Norman, Pittsburgh Post-Gazette

“Woodward follows Fear with another alarming and deeply reported account of turmoil, dysfunction, and recklessness within the Trump administration... This devastating report will leave a lasting mark.”—Publishers Weekly

“The most comprehensive and damning catalog yet of [Trump’s] failings in office”—Doyle McManus, Los Angeles Times

“An essential account of a chaotic administration that, Woodward makes painfully clear, is incapable of governing.”—Kirkus Reviews, starred review

“Arguably the most important journalist of the past 50 years, and we all owe him a huge debt of gratitude. He is thorough, disciplined, careful. He fact-checks, backs up what he says, mines as many sources as possible.”—Harlan Coben, bestselling novelist

“The preeminent journalist of his generation.”—David Ignatius, Washington Post

"RAGE, a remarkably current and informative audiobook about Donald Trump's presidency, is critical of the job he has done. 'Trump,' concludes its author, 'is the wrong man for the job.' Narrator Robert Petkoff's tone is conversational, and he doesn't attempt to mimic either the author or his subject, allowing the material to speak for itself. And what rich material it is, based on 19 interviews Woodward conducted with the president, along with current and past members of his inner circle, as well as a trove of documents. Of particular interest may be Trump's varied responses to COVID-19—but there are also insights into his views on China, North Korea, racial unrest, the men who once worked for him such as Jim Mattis and Dan Coats, and, of course, his own legacy. This is an absorbing audiobook that will keep listeners tuned in regardless of how much they think they know about the past four years."—AudioFile Magazine

SEE ALL
See more by Robert Petkoff
Thank you for signing up, fellow book lover!