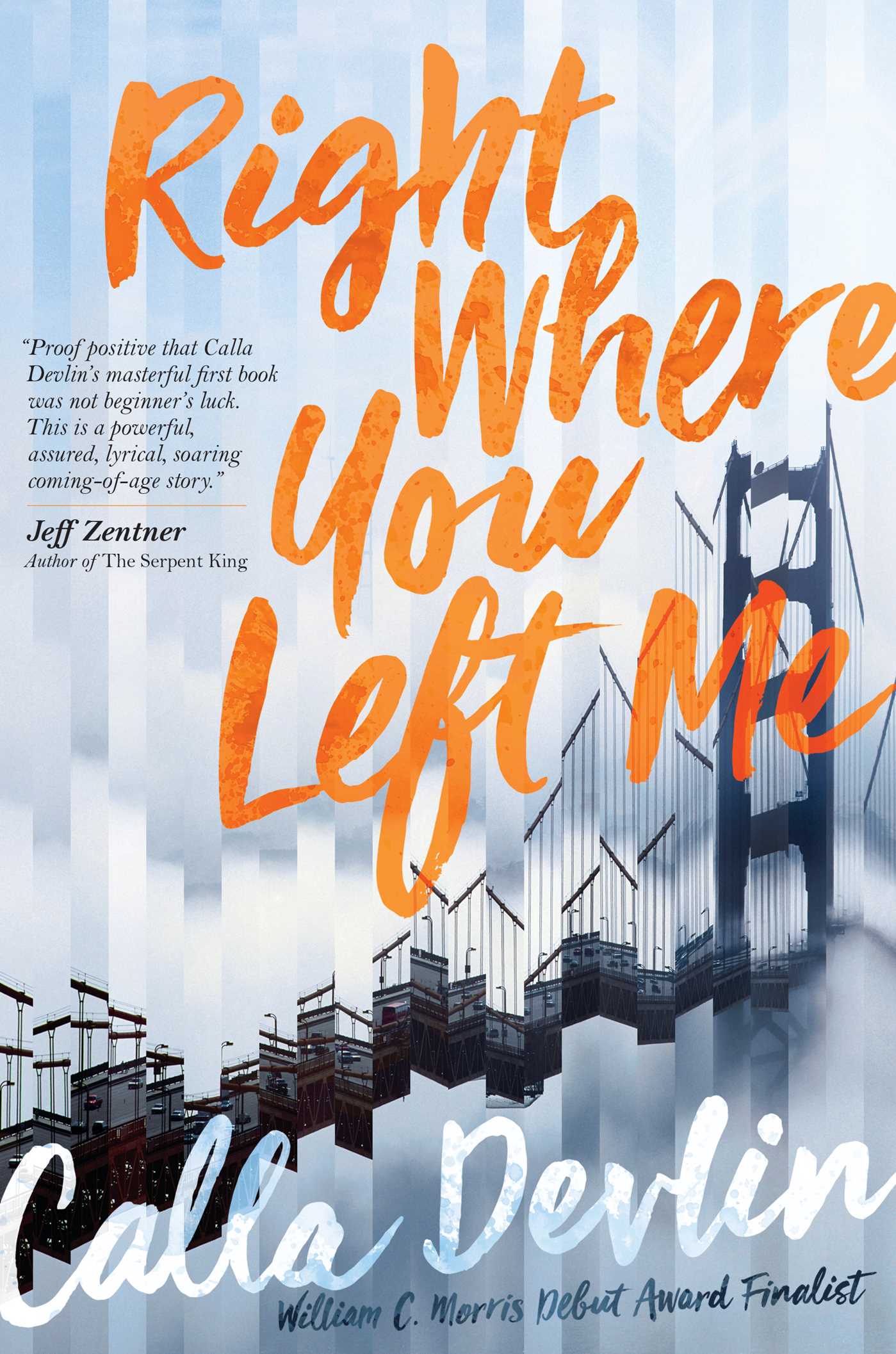 Right Where You Left Me

By Calla Devlin
PRICE MAY VARY BY RETAILER

After Charlotte’s father is kidnapped, she and her mother must overcome their differences and find a way to rescue him in this eloquent, moving portrayal of family from the author of William C. Morris Award finalist Tell Me Something Real.

In search of the perfect story to put a human face on a tragedy for his newspaper, my dad will fly into the eye of the storm. And now he’s heading to Ukraine, straight into the aftermath of a deadly earthquake. I don’t want him to leave. I don’t want to spend the week alone in a silent house with my mother, whose classically Russian reserve has built a wall between us that neither of us knows how to tear down. But I don’t tell him this. I don’t say stay.

I think I’m holding it together okay—until the FBI comes knocking on our door. Now it’s all I can do to fight off the horrifying images in my head. The quake has left so many orphans and widows, but Mom and I refuse to be counted among them. Whatever it takes to get Dad back, I’ll do it. Even if it means breaking a promise…or the law.

Right Where You Left Me One
My father specializes in devastation. Not coups and wars—intentional and systematic—but nature’s acts of violence, random and indiscriminate, destroying regions on a whim. Tsunamis, hurricanes, and earthquakes.

The muted TV broadcasts images of rubble and tears. An anchorwoman with enormous hair wrinkles her brow and mouths something heartbreaking. Death tolls and numbers of the missing. Dad will fly into the eye of the storm.

When I come home from school, I find him folding sweaters and thick socks, stacking them neatly into his duffel bag. Clothes intended for cold weather. He aligns the hems of a pair of jeans, long enough to fit his six-three frame. His height makes almost everything look miniature in comparison, furniture and ceilings more suited for a dollhouse. I drop my backpack to the floor, and when he walks over for a hug, he doesn’t make me feel small at all.

“Earthquake in Ukraine. I’m flying into Luhansk. Want to come with me to the airport?”

I glance at the TV, at the smoke billowing from what used to be an apartment or office building. Twenty-odd stories now pancake-flat. “Aftershocks?” I’ve become an armchair meteorologist.

“One so far. Worse than the quake.”

Dad writes stories that make people weep from guilt and pity. Profiles of Mother Nature’s refugees. The Red Cross’s favorite journalist. When I pick up his passport and press credentials—jeremiah lang, reporter, SAN FRANCISCO TRIBUNE—I want to toss them in the trash or hurl them off the Golden Gate Bridge. Anything to keep him here.

We head to the car. It’s our routine: He drives to the international terminal and I drive myself home, keeping his car until his return. A temporary ownership, freedom that doesn’t really make up for his absence. At least I’ll have the car for my sleepover tonight at Emma’s. He’s a distracted driver, restless, tapping his foot and messing with the stereo. He becomes obsessed with different kinds of music: jazz, Icelandic pop, Puccini, Amy Winehouse. He researches and reads and downloads, forcing me to listen, lecturing me about the legacy of Etta James and the enduring power of La Bohème.

My mom says he is more of a teenager than I am. She means this as a compliment.

We listen to this Cuban hip-hop band that I liked at first but now makes my ears bleed from repetition. If I didn’t love him so much, I’d delete the album from his library. He tells me about the dichotomy that is Cuba, about his recent trip to Havana to do an anniversary piece, of seeing police on every corner. Dad, a baritone storyteller, should work in radio. I am his dedicated audience, listening to details until I feel like his fellow traveler. It’s been ten years since Hurricane What’s-his-name paid a furious visit, but you couldn’t tell now. All Cubans have housing and education and health care. The government values the arts, funding musicians and painters who promote its agenda and locking up those who don’t. Bookstores are state-run, peddling propaganda and nothing more.

“I drank in Hemingway’s favorite bar, but I couldn’t buy one of his books,” he says. “Hemingway loved Cuba. He had a house there. It’s a museum now. I can’t wait to take you there, Charlotte.”

“I’ll add it to the safe list.” I feel compelled to travel to the countries he’s visited and document the rebuilding and healing. I’d blow through rolls of film and fill up all the space in my phone with photos. It’s selfish, but I need to replace the images in my head, the ones of orphans and widows and ruin. Thailand, Haiti, Nepal, and Ecuador. Now Ukraine. Havana meets both of our criteria. Dad has enough airline miles for us to fly anywhere at least ten times over. But my parents prefer to take me to what they regard as safer places: Montreal, Oaxaca, Venice.

I’m not sure how they define “safe.”

Mom’s pushing for an Alaskan cruise. She wants me to see snow, but not in her homeland. Too many memories. Too much grief.

He taps the steering wheel to the rhythm. I look out the window, at the concrete and stucco landscape. I pull my camera from my backpack and take the cap off the lens. I started doing this a couple of years ago, taking a good-bye picture each time he leaves. When I get home, I’ll print it out and tape it to the fridge. “Did Mom give you a list?” I ask.

“She wanted me to bring a second suitcase.” He smiles when he says this.

They met when he had just started at the newspaper. His editor sent him to St. Petersburg to cover the flooded Neva River. Out of the entire newsroom, Dad was the only one remotely familiar with Russia—he’d taken a class on Russian lit and knew a handful of useless phrases. Apparently, Tolstoy is responsible for his career.

Mom, just finishing college, was his translator. She still pines for her favorite lotion and tea from home, brands too obscure to buy online.

“Your mom said to tell you she’ll be home late tomorrow night, after her cooking class,” he says. “I made a lasagna for you guys. I should be back in a week. Maybe earlier.”

Mom is a baker, and Dad loves to cook. Dad travels the world, but Mom is more absent. I’m an only child, accustomed to being alone in the house, wandering the halls like a ghost. Sometimes I like it this way.

We exit the freeway, and I want him to drive at a snail’s pace, inching along at five miles per hour. I’ll endure more of his hip-hop. I’ll ask more questions about Cuba and Ukraine. I’ll recite trivia about extreme weather. I’ll promise to go to Dad’s alma mater, NYU, even though I won’t know if I got in for a few weeks, even though I really want to stay home and go to Berkeley. I’ll even speak Mom’s Russian.

I spot the airport, magnificent with its glass facade and dangling vines, and I want him to slam on the brakes. I don’t want him to leave. I don’t want to spend the week alone in a silent house with my mother. But I don’t tell him this. I don’t say, Stay. I’ve inherited Mom’s light blue eyes and reserve, so I just reach for his hand until we idle in front of a skycap.

He kisses my cheek. I tell him I love him. Before I climb into the driver’s seat, I snap his picture. He gives me his usual over-the-top grin. I watch him carry his duffel bag through the doors, beneath the departures sign, until he disappears into a crowd of tourists.

I don’t leave until an airport cop pats the hood of the car and waves me away. 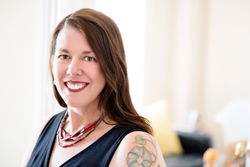 Calla Devlin is the author of William C. Morris Award finalist Tell Me Something Real. She’s also a Pushcart nominee and winner of the Best of Blood and Thunder Award whose stories have been included in numerous literary journals and in anthologies, including Because I Love Her: 34 Women Writers Reflect on the Mother-Daughter Bond, for which she was featured in the San Francisco Chronicle and San Francisco Magazine. Visit her at CallaDevlin.com.

"Charlotte's feelings of helplessness and anxiety over the situation are compounded by her tenuous relationship with her Russian-immigrant mother, whose distance and reserve are the results of old traumas. Charlotte copes by weaving tales from Russian folklore throughout her story as a way of coming to terms with her own personal struggles...An intriguing element."

"Devlin writes a compelling story filled with complex characters. . . . A great coming-of-age story [for fans of] Beginning of Everything by Robyn Schneider, Nick and Norah’s Infinite Playlist by Rachel Cohn, and Thanks for the Trouble by Tommy Wallach."

“The writing is fluent and stylish, and Charlotte’s engagement with Russian folklore adds depth to her view of her family’s tragedies past and present. The book is insightful about the delicate equilibrium of families; its portrait of Charlotte’s mother, fierce, self-contained and yet dependent, is original and haunting, and Charlotte’s desperate need for her love is beautifully complicated. The parental abduction plot is suspenseful, but it’s the familial struggle that will really strike a chord with readers.”

Right Where You Left Me

By Calla Devlin
PRICE MAY VARY BY RETAILER