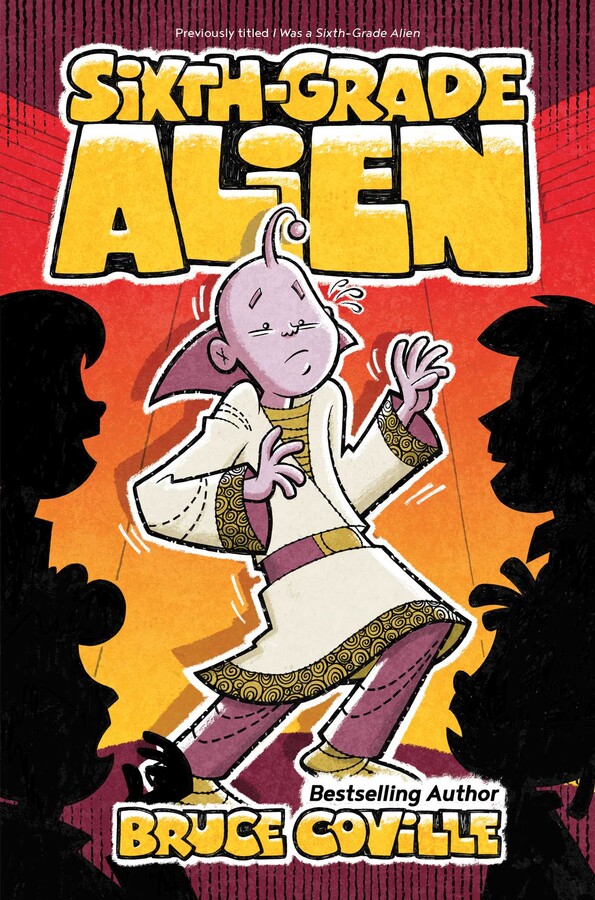 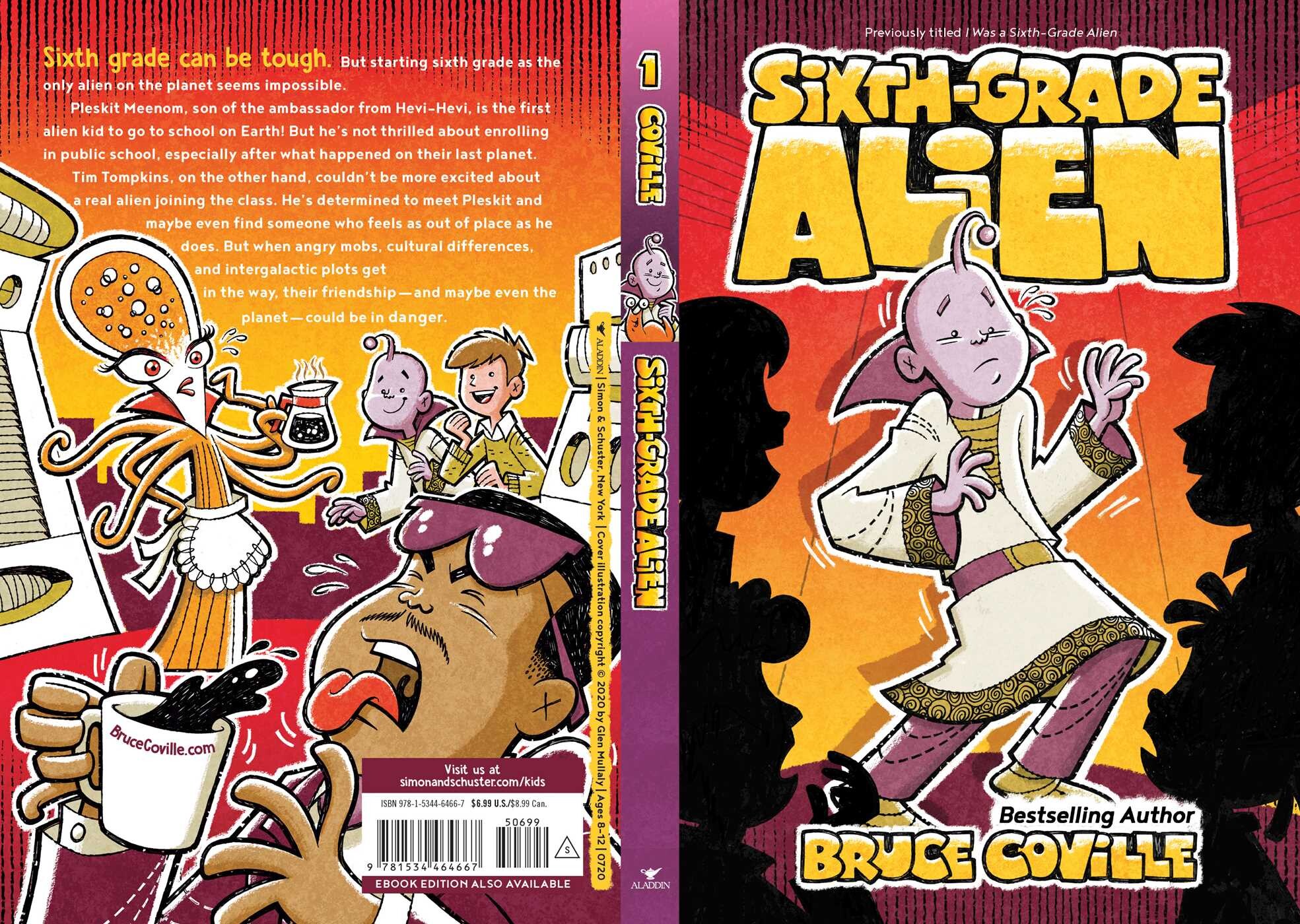 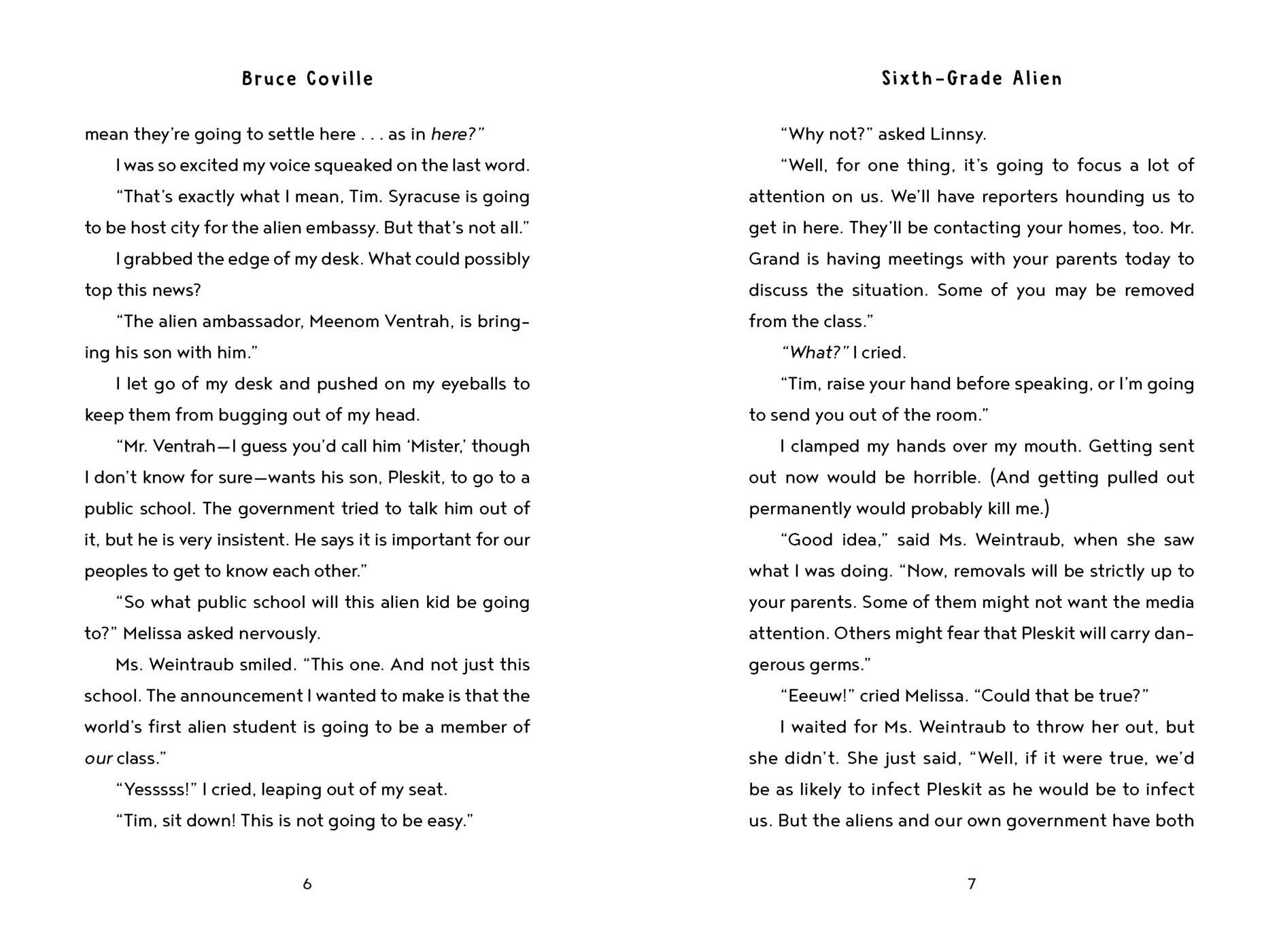 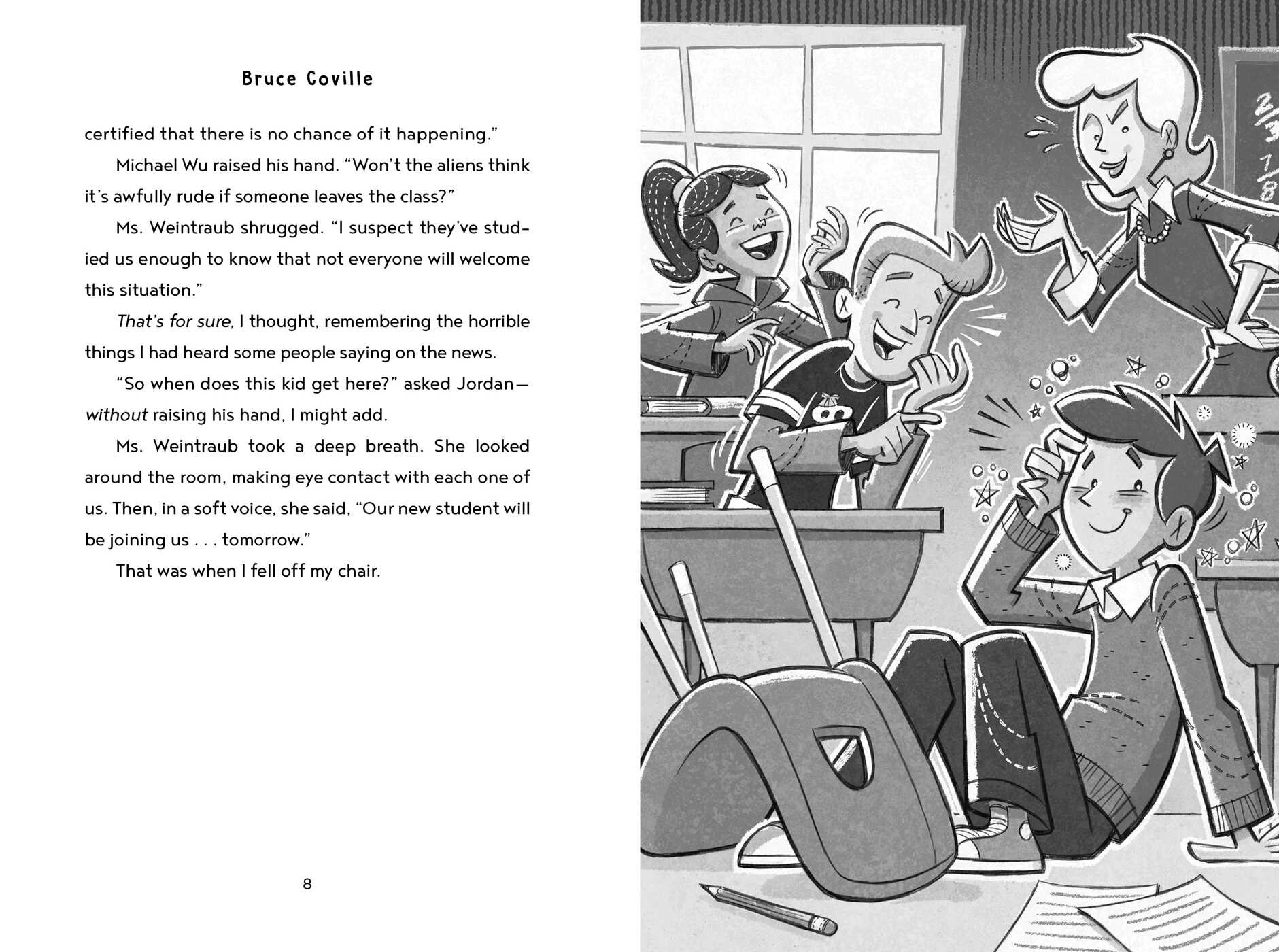 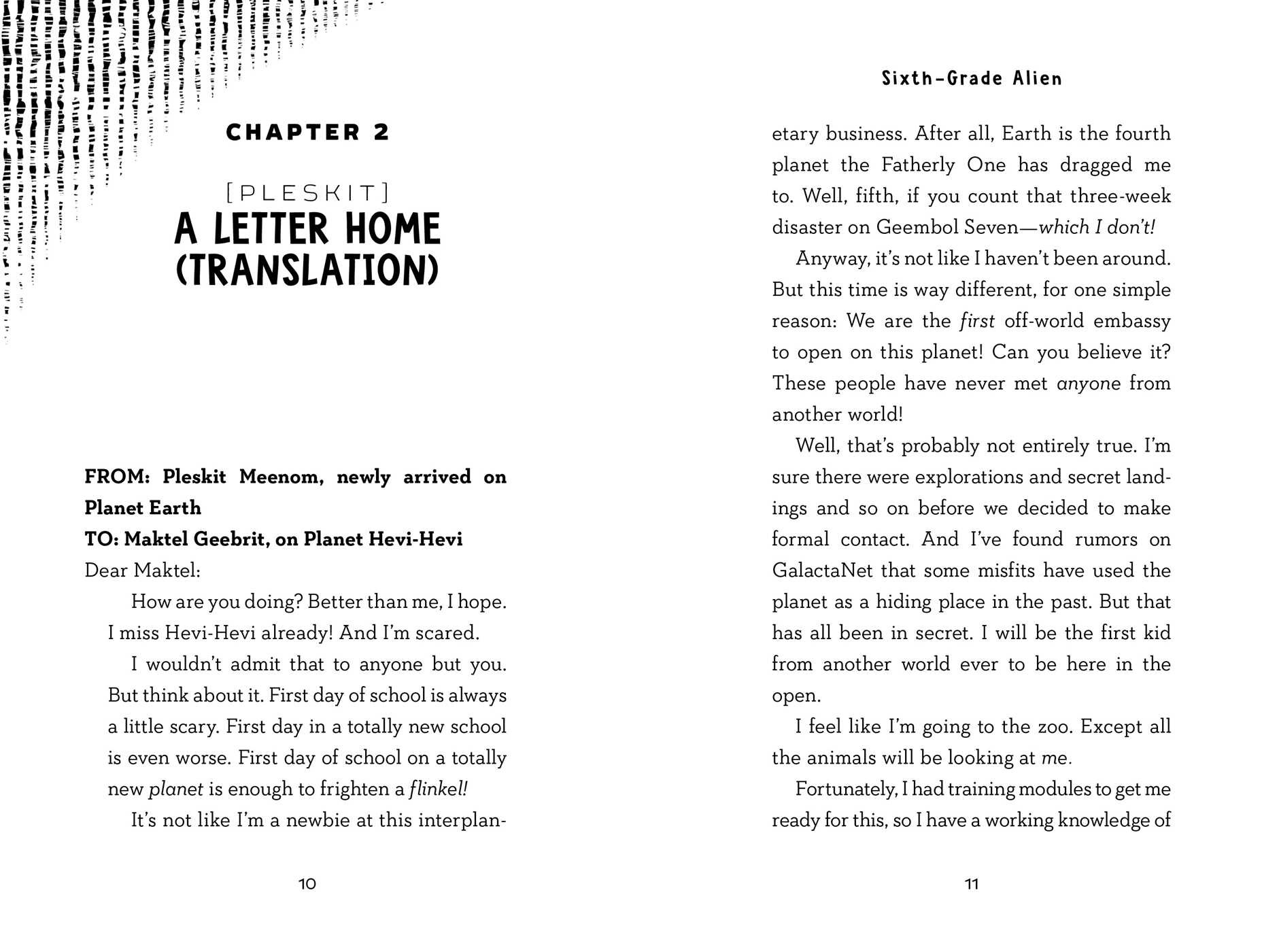 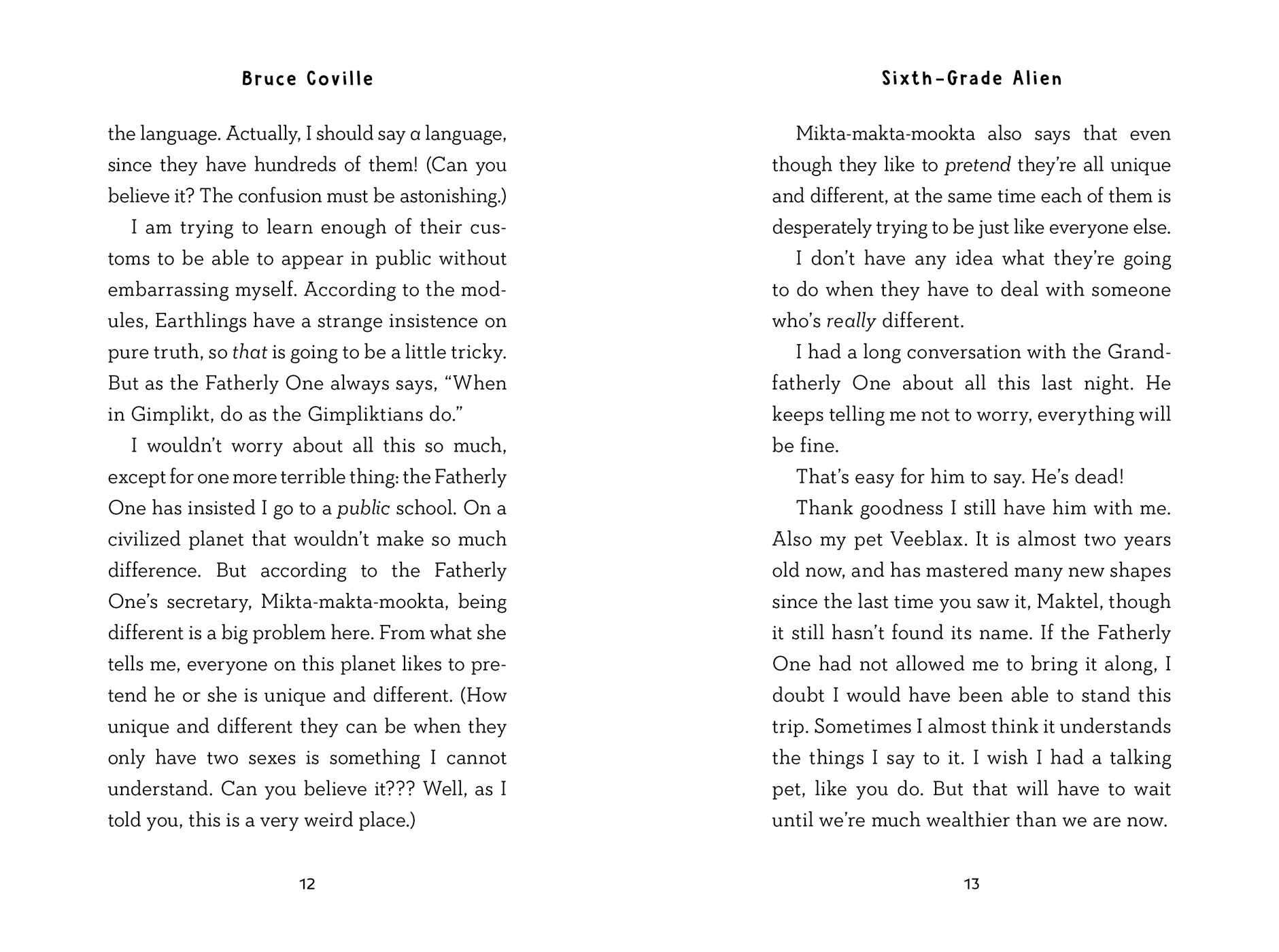 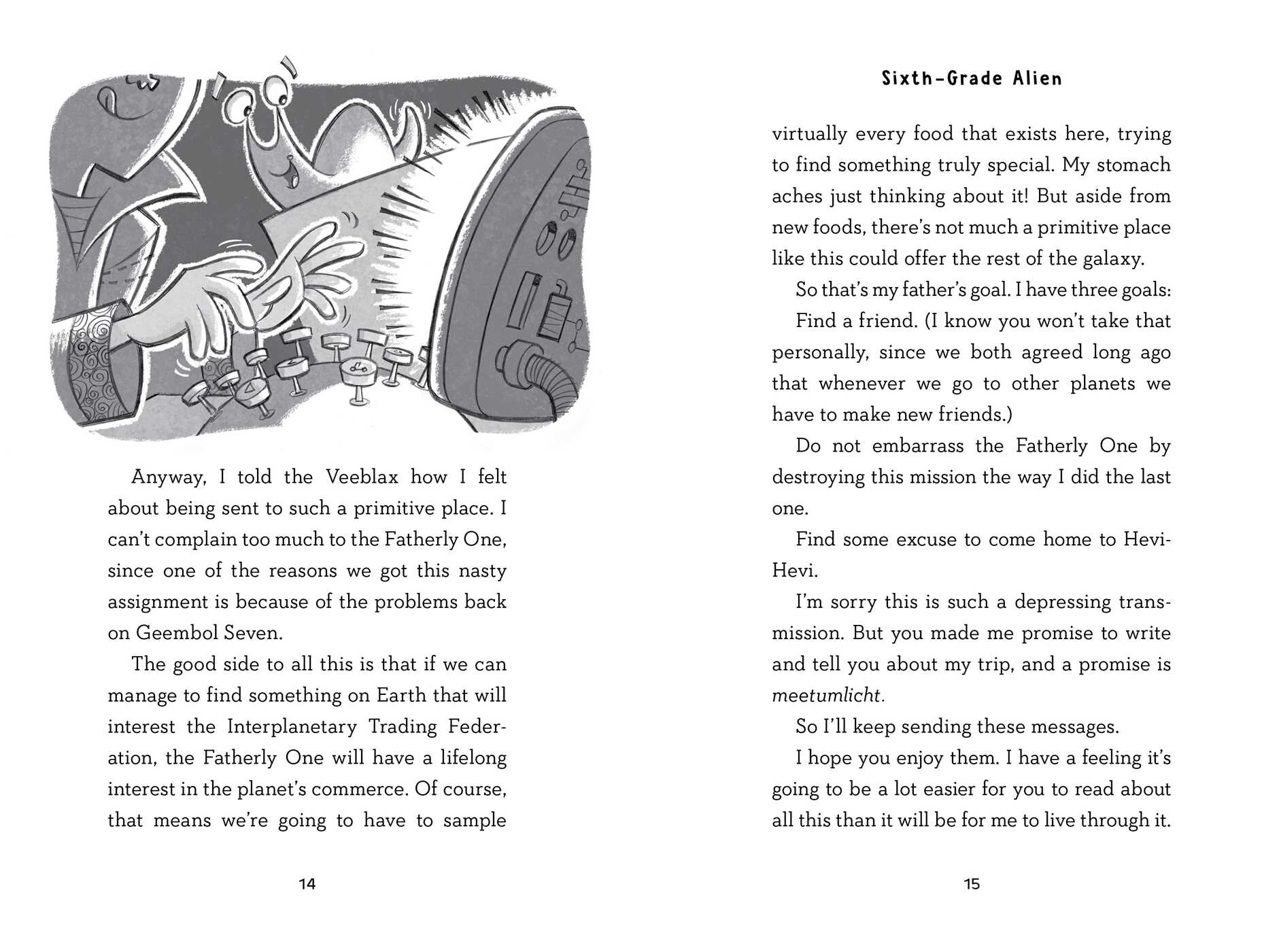 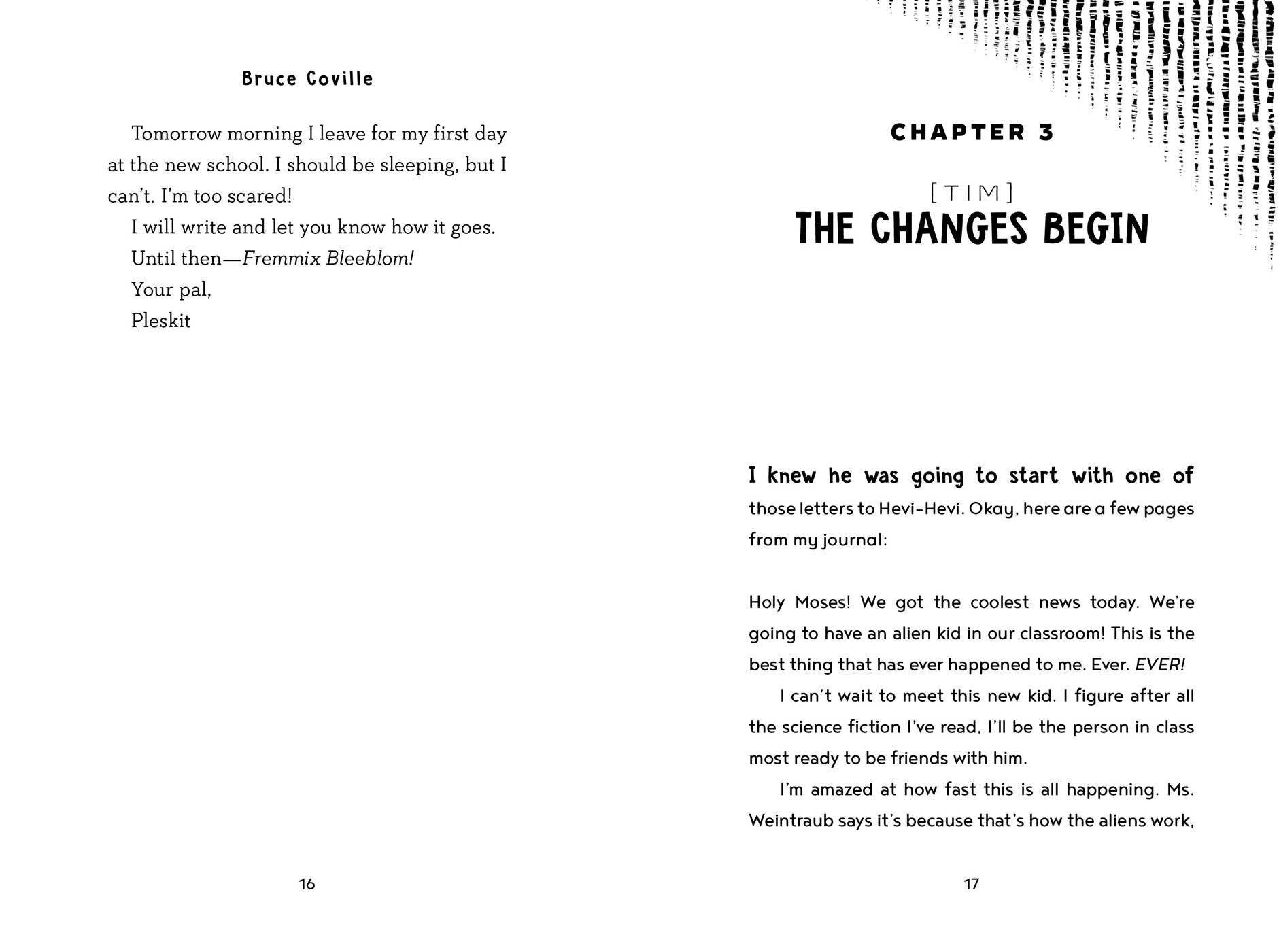 Fellow sixth graders, an alien and a human, become unlikely friends in this hilarious, fast-paced, and accessible first book in the sci-fi series Sixth-Grade Alien from the bestselling author of Aliens Ate My Homework, Bruce Coville.

Sixth grade can be tough. But starting sixth grade as the only alien on the planet seems impossible.

When Pleskit Meenom, the son of the first alien ambassador to earth, finds out he’s going to public school, he’s less than thrilled. Especially after what happened on their last planet.

Tim Tompkins, on the other hand, couldn’t be more excited to meet a real alien—even if some of his classmates are warier of the first purple kid in their class. Tim is determined to befriend Pleskit and secretly hopes he may have finally found someone who feels as out of place as he does.

But when angry mobs, cultural differences, and intergalactic plots get in the way, their friendship—and maybe even the planet—could be in danger.

CHAPTER 1 [TIM] MS. WEINTRAUB DROPS A BOMBSHELL
I just wanted to have a friend. The part about almost getting killed and kind of saving the world happened by accident.

It’s not like I didn’t have any friends. I may be kind of nerdy, but I get along with people okay, if you don’t count Jordan Lynch. But I wanted a best friend, someone who was my total bud, someone I could really talk to.

Linnsy Vanderhof, who lives in the apartment two floors up, used to be my best friend. We’ve been in the same class since kindergarten, but she doesn’t like to be seen with me much these days because, socially speaking, she’s much higher on the food chain than I am.

Actually, Linnsy is just plain higher than me, since she’s sort of the class Amazon, taller and tougher than any of the other girls, and most of the boys, too. That’s one reason I’m glad we grew up together; it makes her more tolerant of me, which means she’s less likely to punch me really hard. Mostly what I get is a sock on the bicep when she thinks I’ve done something stupid. She calls this “a little punchie-wunchie, as a reminder not to be such a dorkie-workie.” She doesn’t hit me all that hard, but sometimes I worry that a few thousand punchie-wunchies—which is what I figure I’ll have had by the time we’re seniors—will turn my bicep into mush.

Which it sort of is anyway.

Anyway, I’m used to Linnsy. The real royal pain in my butt is Jordan Lynch, who’s only been in our class for two years, ever since he got kicked out of the fancy private school where he used to go. Great system, huh? The kid is so bad they can’t pay a school to take him, so we get him. It’s too bad, because if you could pay a school to take him, I’d start a magazine drive or something to cover the costs.

Jordan sits in the back row, three desks behind me. Linnsy sits two desks over. Our teacher, Ms. Weintraub, sits at the front of the room—or would, if she were ever sitting, which she’s mostly not, since she’s almost always up and doing something. I really like her. She makes things interesting.

I made the mistake of saying that to Linnsy once. (I still get to talk to her because our mothers take turns driving us to school in the morning.) She gave me a little punchie-wunchie and said, “Tim, beneath that dorky exterior beats the heart of someone from another world.”

That was me. Tim Tompkins, sixth-grade alien, weirdest kid in the class.

School had only been going for a week—just long enough for me to have serious doubts about whether I was going to live through the year—when Ms. Weintraub called us together for “an important announcement.”

I struggled out of the headlock Jordan had me in and started for my desk. I figured the “important announcement” was probably about lunch money or eraser duty or something, but it was a good excuse to get away from Jordan.

Once we had settled down, Ms. Weintraub said, “I’m sure you all followed the big news this summer.”

“You mean about the aliens?” I cried.

Linnsy groaned, and I could tell by the look on her face that if I was sitting closer to her I’d be getting “a little punchie-wunchie” right then. But I couldn’t help myself. Ever since the first time I saw Close Encounters of the Third Kind (I’ve watched it forty-seven times in all), I’ve been waiting for aliens to contact us.

So when the president announced in July that Earth had received a message from the Interplanetary Trading Federation, I had been one of the happiest kids in the world. I figured it was just about the biggest news in history. So what else could Ms. Weintraub have been thinking of?

I guess the others didn’t feel the same way. At least, Jordan didn’t. “Space Boy strikes again,” he snickered, using one of his three favorite nicknames for me. (The other two are Nerdbutt and Dootbrain.)

“Actually, Tim is right,” said Ms. Weintraub, smiling slightly. “The announcement is about the aliens.”

Ms. Weintraub laughed. “No, Melissa. The aliens haven’t done anything to disprove their claim that they’re friendly.”

I could scarcely keep myself in my seat. “So what’s the announcement?”

Ms. Weintraub looked serious. “As you know, the aliens are establishing a single embassy for the whole planet, which many countries have been competing to host. The aliens have finally made their decision. They’re going to settle here.”

“Are we going to Washington to see them?” I asked eagerly.

Ms. Weintraub frowned at me. “Tim, please control yourself. And you misunderstand me. The aliens are not settling in Washington. Everyone was afraid the aliens would choose the United States, and there was some jealousy about that. So to keep it a worldwide mission, the aliens have decided to settle in this country—but not in the capital.”

I tried to keep quiet, but I couldn’t. “You don’t mean they’re going to settle here… as in here?”

I was so excited my voice squeaked on the last word.

“That’s exactly what I mean, Tim. Syracuse is going to be host city for the alien embassy. But that’s not all.”

I grabbed the edge of my desk. What could possibly top this news?

“The alien ambassador, Meenom Ventrah, is bringing his son with him.”

I let go of my desk and pushed on my eyeballs to keep them from bugging out of my head.

“Mr. Ventrah—I guess you’d call him ‘Mister,’ though I don’t know for sure—wants his son, Pleskit, to go to a public school. The government tried to talk him out of it, but he is very insistent. He says it is important for our peoples to get to know each other.”

“So what public school will this alien kid be going to?” Melissa asked nervously.

Ms. Weintraub smiled. “This one. And not just this school. The announcement I wanted to make is that the world’s first alien student is going to be a member of our class.”

“Yesssss!” I cried, leaping out of my seat.

“Well, for one thing, it’s going to focus a lot of attention on us. We’ll have reporters hounding us to get in here. They’ll be contacting your homes, too. Mr. Grand is having meetings with your parents today to discuss the situation. Some of you may be removed from the class.”

“Tim, raise your hand before speaking, or I’m going to send you out of the room.”

I clamped my hands over my mouth. Getting sent out now would be horrible. (And getting pulled out permanently would probably kill me.)

“Good idea,” said Ms. Weintraub, when she saw what I was doing. “Now, removals will be strictly up to your parents. Some of them might not want the media attention. Others might fear that Pleskit will carry dangerous germs.”

“Eeeuw!” cried Melissa. “Could that be true?”

I waited for Ms. Weintraub to throw her out, but she didn’t. She just said, “Well, if it were true, we’d be as likely to infect Pleskit as he would be to infect us. But the aliens and our own government have both certified that there is no chance of it happening.”

Ms. Weintraub shrugged. “I suspect they’ve studied us enough to know that not everyone will welcome this situation.”

That’s for sure, I thought, remembering the horrible things I had heard some people saying on the news.

“So when does this kid get here?” asked Jordan—without raising his hand, I might add.

Ms. Weintraub took a deep breath. She looked around the room, making eye contact with each one of us. Then, in a soft voice, she said, “Our new student will be joining us… tomorrow.”

That was when I fell off my chair.

Coville develops a sustained mood of excitement and suspense after Tim and Pleskit are captured by unfriendly aliens who plan to take control of Earth and exploit it for themselves. The mystery element works well--the identity of the "bad guys" is not obvious. Coville's characters are sympathetic, especially Pleskit, who is endearing in his desire to get things right, but never quite succeeding. The school scenes are dead-on, and the treatment of politicians and the media is also adept. Coville presents the theme of accepting those who are different without detracting from the action or being overly didactic...reluctant readers will devour this breezy read.