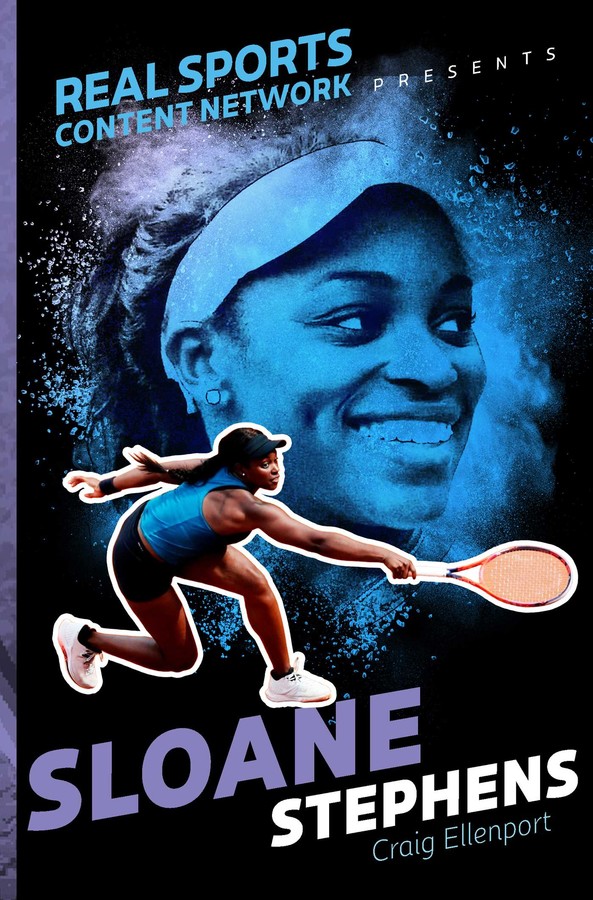 Learn about tennis superstar Sloane Stephens in this book in a nonfiction series about your favorite athletes’ childhoods and what (or who) helped them become the stars they are today!

Sloane Stephens comes from a family of athletes. Her mother was an All-American swimmer while her father was an NFL running back. However, Sloane came to tennis by accident: she needed something to do while her mother played, so she picked up a racquet of her own and suddenly a star was in the making.

Her parents enrolled her in a tennis academy and in 2009, Sloane turned professional. Ultimately, she won the junior French, Wimbledon, and US Open doubles titles in 2010. She represented the USA at the 2016 Rio Olympics and in 2017 she captured the championship trophy at the 2017 US Open. Who knows what new heights she’ll climb.

Learn all about the childhood that put Sloane on the path to success in this fascinating biography.

Chapter 1: The US Open Champ CHAPTER 1 THE US OPEN CHAMP
What does a professional tennis player do on the eve of a major championship match? If you’re Sloane Stephens, the night before your first appearance in the final of one of the sport’s four biggest events—the 2017 US Open—you are in your New York City hotel room, reading online car safety reviews.

Was the twenty-four-year-old Stephens looking to buy a car? No. But she was bored, and nervous. She didn’t want to talk to friends or family, didn’t want to get lost in a movie. So she sat quietly in her room, browsing Autotrader.com for no apparent reason.

On the one hand, anybody would be nervous going into their first big championship match, on such a big stage. On the other hand, it could be argued that Stephens was already a big winner just getting this far. After all, when the 2017 US Open tournament began in late August of that year, Stephens was ranked eighty-third in the Women’s Tennis Association (WTA).

And that was not bad, considering where she’d been ranked earlier that summer.

Who knew there were that many women professional tennis players?

Actually, there had been a time when Stephens was ranked much higher. It was true, she had never reached the final of one of the Grand Slam events, but she had been a successful figure in women’s tennis for more than five years. The reason she had such a low ranking in the summer of 2017 was that she had been out of competition, fighting her way back after foot surgery that had her temporarily in a wheelchair.

Overall, she was off the courts for eleven months, slowly working her way back into form. By the time she got to Queens, New York, for the US Open, Stephens was on a roll. She had won fourteen of her last sixteen matches coming into the Open.

When she won her first-round match—defeating 2015 US Open finalist Roberta Vinci—it was her first victory at the US Open since 2014. In the second round, she beat No. 11 seed Dominika Cibulkova. Two days later she defeated Ashleigh Barty, an up-and-coming young Australian player. In the fourth round, she took care of No. 30, Julia Görges, to reach the quarterfinals.

The quarterfinal match against No. 16, Anastasija Sevastova of Latvia, marked Stephens’s first match ever on center court at Arthur Ashe Stadium. The crown jewel of the Billie Jean King National Tennis Center, which hosts the US Open, Arthur Ashe Stadium is the largest tennis stadium in the world. Literally and figuratively, it is the biggest stage in the sport, and Stephens was up to her first challenge there. She defeated Sevastova, 6-3, 3-6, 7-6, to earn a date with Venus Williams in the semifinals.

The other semifinal match featured Madison Keys and CoCo Vandeweghe—which was significant. For the first time in thirty-six years, all four women’s semifinalists at the US Open were American.

That was well and good, but Stephens’s primary concern was getting past Venus Williams—a player Stephens had idolized when she was younger—to reach her first Grand Slam final.

Venus and Serena Williams were the dominant figures in women’s tennis in the twenty-first century. Serena would go on to win more Grand Slam titles than anyone in the modern era, but it was older sister Venus who burst on the scene first. By the time Stephens was eight years old, Venus had already won the US Open twice.

Because of their success on the tennis court, the Williams sisters were arguably among the most successful and recognizable African American women in the world, which made it easy for an African American girl like Sloane Stephens to grow up admiring them.

Stephens still admired and appreciated all that Venus and Serena had accomplished, but she could no longer let those feelings get in the way of her own ambitions. This was not the first time she’d face one of the Williams sisters—her victory over Serena in the 2013 Australian Open quarterfinals was the match that put Stephens squarely on the tennis map—but this contest was huge as well.

When the match began, it looked like it would be easy: Stephens took the first set, 6-1. But just as she breezed through that set, Williams made quick work of the second set, winning 6-0.

In the best-of-three match, Stephens shook off that poor second set to win the first two games of the third and deciding set. But then the roller-coaster ride began: Williams won the next three games to go up 3-2; Stephens won the next two to go up 4-3; Williams took the next two for a 5-4 lead.

On the ensuing volley, Stephens rocketed a backhand shot down the line that flew past Williams. Stephens won the next point too, and the set was all tied up. In the eleventh game, Stephens made a perfect drop shot—that means putting spin on the ball so it drops just over the net and is impossible for a player standing back at the baseline to get to it in time—breaking Williams’s serve and taking a 6-5 lead in the set.

Suddenly Stephens found herself serving for the match. Four points later, she had it. The 6-1, 0-6, 7-5 victory sent her to the US Open final.

Despite the momentous win over Williams in the semifinals, Stephens still found herself nervously reading those car safety reviews in the hotel on the eve of the title match.

But when it came time to face her good friend Madison Keys in the US Open championship match the next day, Stephens was cool, calm, and collected. Unlike the quarterfinal win over Sevastova or the semifinal win over Williams, the final didn’t require a third set.

Stephens won the first set, 6-3. She was up 4-0 in the second set but facing game point. Keys made a great drop shot, but Stephens came racing to the net and returned the volley. With Stephens at the net, Keys was in position to easily hit a forehand shot over her head to close out the game, but Stephens—using lightning-fast reflexes—lunged to her right and sent the ball back over the net. With Keys back by the baseline, she had no chance to get to it. The game went to deuce and Stephens then won the game to go up 5-0—putting her on the brink of a title.

With Stephens up 6-3, 5-0, Keys fought off two match points as game six went to deuce. Stephens won the next point—and for the third time reached championship point. After a long volley, Keys hit a forehand that slammed into the net.

Stephens lifted both arms in triumph as she walked toward the net. Then her eyes opened wide and she covered her mouth with her left hand. It slowly sank in what she had just accomplished. She hugged Keys, her good friend, then made her way up to her box and shared a long embrace with her mother.

Stephens was the fourteenth unseeded player to advance to a Grand Slam final in the Open era (only the top 32 in the rankings are seeded among the 128 players at the Open).

Ranked No. 83 going into the US Open, she was the lowest-ranked player ever to win the event. Two days after her victory, when the rankings were updated, Stephens was No. 17 in the world.

“I mean, there are no words to describe how I got here, the process it took or anything like that,” she said. “Because if you told someone this story, they’d be, like, ‘That’s insane.’?”

It was a crowning achievement for Stephens, who had overcome many obstacles on and off the court to reach this point. She had battled multiple injuries, answered to critics who had questioned her desire to win, weathered a public feud with the biggest star in her sport, and dealt with family tragedy.

Because of all those things, the post-match embrace she shared with her mother was so special.

“My whole life my mom has been very supportive,” she said. “She’s been in my corner the whole time, and I have had, you know, a lot of ups and a lot of downs—and some really low downs. And throughout that, my mom has been there one hundred percent with me.”

Craig Ellenport is a veteran writer and editor based in New York. A former senior editor at NFL.com, Ellenport has written about football, baseball, basketball, hockey, and tennis. He has written and edited more than a dozen sports books.