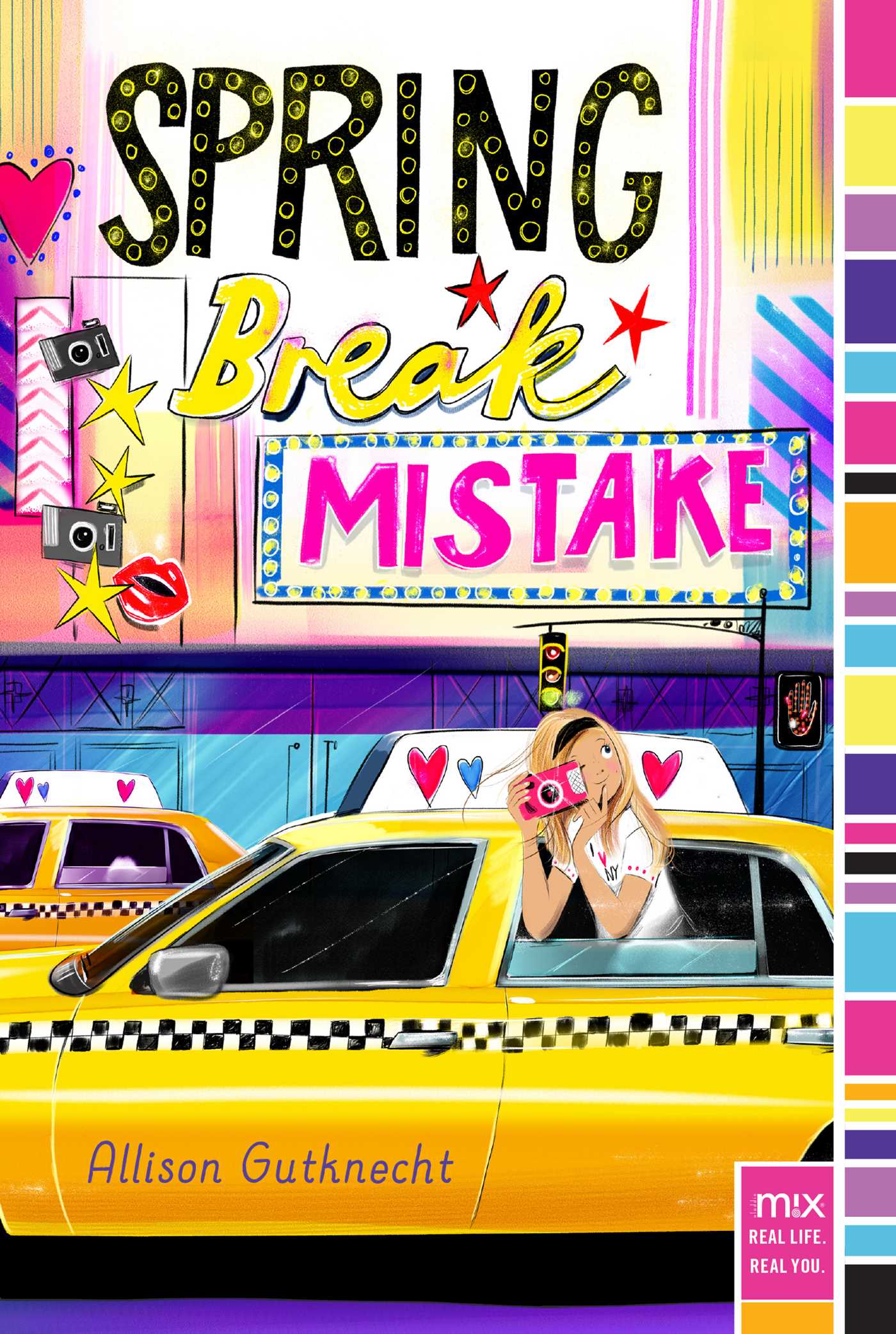 Part of mix
By Allison Gutknecht
PRICE MAY VARY BY RETAILER

A tween is forced to use her photography skills to track down a missing classmate during a class trip in New York City in this M!X novel from the author of The Bling Queen.

After years of suffering through the most boring spring vacations ever, Avalon Kelly is ready for a week of adventure. On a hash-tagged whim, she entered the PhotoReady app’s spring break getaway contest to NYC—and won!

But right away, this trip of a lifetime isn’t turning out as planned. Avalon’s best friend isn’t one of the PhotoReady winners, which means that not only will Avalon have to venture to the Big Apple by herself, but she’ll be assigned a stranger as a roommate. The perky and talkative Sofia seems pleasant enough, but snooty Kensington—who was placed in Room 609 at the last moment due to a mix-up—is a whole other story.

Just when Avalon is about ready to abandon the trip entirely, one of the fellow contest winners, the cute and mysterious Tate, disappears from the group, and the Room 609 girls must band together, using the clues within their photographs, if they have any hope of tracking him down. Will the hunt for Tate and the view of New York City through her camera lens be enough to convince Avalon to stick it out for the full week?


The worst thing about my sister is her smile.

It’s not that it’s a bad smile—it’s a great smile, actually. One of the best there is. It’s the kind of smile that seems ever-present, even when Arden is scowling. I would think the expression “she can light up a room” was a load of baloney, if it weren’t for Arden’s sparkle of a mouth. And the worst part is she didn’t even do anything to deserve it—not really, anyway. She was gifted with picket fence–straight teeth, with a coat of white shine to match.

I, however, have the kind of teeth that require four years of braces just for the mere hope that they might someday end up not being an abject disaster. This is the injustice of my life.

Arden is flashing one of her signature smiles toward me at the moment, all while lounging on my window seat with her feet propped up on the grids of the glass pane.

Which she knows I hate.

“Get your hooves off my window,” I tell her, scrolling absentmindedly through the PhotoReady app on my phone. “You’re smudging my view.”

“I’d hardly call this a view,” Arden argues. “A bunch of trees and a rusty old swing set.” I click out of PhotoReady and open the camera, aiming it in Arden’s direction.

“Say cheese,” I coo in a singsong voice. I pretend to snap a picture as Arden turns her head in my direction. Her feet fly off the window as she scrambles to stand.

“Don’t you dare post that.” She leaps across the room and flops onto the bed next to me. I roll in the opposite direction until my feet hit the floor, phone still in my hand, then I walk to the window and make a great display of lifting one of the throw pillows to clean her toe print off the glass. But at the last second, I snap a photo of it instead.

“Um, what are you doing?” Arden asks.

“Taking a picture of the mark your man-toes made,” I say. “It could probably be studied in the Museum of Natural History.”

Arden crosses her arms and stomps her foot against my bedspread. “Delete the photo,” she tells me in her best principal voice. “Now.”

“Oh, calm down,” I tell her, settling onto the window seat and texting the toe-print shot to my best friend, Celia, with the caption, For your heart collection, before quickly deleting it.

“Prove you erased it,” Arden says, reaching for my phone. I toss it on the bed beside her and watch her examine my albums. Satisfied, she slides it away from her. “Here’s a rule for Florida—only take good pictures of me.” I snort. “Or better yet, don’t take pictures of me at all. That’s the only way I’ll know I’m safe. I mean, the worst pictures of me ever taken are the ones from spring break.” Arden pulls at the ends of her thick, dark curls, twirling one around her finger. It is true that every single year, the second Arden steps off the plane and into the Florida humidity, her hair frizzes up like a beehive. What is not true is that this frizz results in bad pictures of her—maybe slightly worse than usual, but still not bad.

After all, she has that smile.

In contrast to Arden’s mane, my hair only seems to grow limper in the Florida heat. Really, between our teeth and our hair, no one would ever believe Arden and I were sisters. As wild and unruly as Arden’s hair is, mine is equally as fine and straight. “Strawberry blond” is what everyone calls it, though in the wrong light, it tends to look baby pink, like the color of a newborn girl’s nursery.

And for some reason, the Florida sun is definitely the “wrong light” for my hair.

“Well, I’m sure the Backgammon Bandits and the Pinochle Posse won’t mind me taking their pictures,” I say.

Arden sighs. “What’s the point of living in Florida if you don’t live on the beach?” she asks. “Or at least near a beach.”

“Or near Disney World,” I add. “I’d settle for Disney World.” Our grandparents have managed to pick the only place in Florida that is far from a beach, far from Disney World, and far from anything but their own retirement community. When Arden and I were little, the place seemed like a giant adventure. Our grandparents’ home became our private village for the week, complete with pools and tennis courts and mysterious games like croquet and shuffleboard. But after twelve years of this annual spring break trip, I had had about all I could handle of backgammon and pinochle.

I walk across the room to retrieve my phone, and then I open PhotoReady again. At the very top of my feed is Arden’s toe print—Celia has posted it with the label #CeliaHeartsNYC, courtesy of @AvalonByTheC. I smirk, more grateful than ever that Arden doesn’t have a PhotoReady account. I’m sure she wouldn’t be pleased to know that her enormous feet marks got a featured mention in Celia’s photography project.

“What’re you smiling at?” Arden asks.

“Celia’s comment on my picture of Jelly,” I lie.

Arden rolls her eyes. “You two and your dumb cat photos . . . ,” she says, sliding herself off my bed. “I’ll leave you alone to be weird by yourself.” I climb onto my mattress the second Arden is gone, lying on my back with my knees bent. I hold my phone over my face, flipping through people’s pictures. Without Arden, my room is so quiet that when my phone dings with a new e-mail, I nearly drop it on my nose.

I sit up to open my inbox, and three words catch my eye instantly: Congratulations from PhotoReady! Suddenly anxious, my fingers seem to move in slow motion as I open the body of the e-mail:

Congratulations! You have been selected to take part in this year’s junior high PhotoReady retreat (the “PhotoRetreat”) in New York City!

My eyes only land on every third word as I read, the entire e-mail beginning to swim together into a gigantic blur. I start pacing the floor in a semicircle, around my bed, from one wall to the other, and then back. I hold my phone in front of me, hoping that with every lap, I’ll be better able to concentrate on its contents, but I only seem to grow more nervous.

Celia and I had applied to this PhotoRetreat—a one-week getaway to New York for seventh- and eighth-grade PhotoReady users—a few months ago. For consideration, you had to use the app to create your own photo project, which is how #CeliaHeartsNYC came to be. Celia had made it her mission to photograph hearts she found “in the wild”—those created by the cream in our science teacher’s coffee, or by two perfectly folded book pages, or in the snow or with sidewalk chalk, or from a bent toilet paper roll. Celia was determined for us to both get accepted into the PhotoRetreat, because “how much fun would it be to spend a week in New York City together?” And while the retreat sounded exciting in theory, in practice, the whole thing made me uneasy. A week away from home, in a new city, with new people, and completely foreign routines? As much as I loved PhotoReady, did I really love it enough to justify five full days away from my comfort zone?

When Celia and I were both wait-listed a few weeks ago, part of me had been relieved. After all, Celia couldn’t say I hadn’t tried—I had created my own photo project just like she had. Mine was called #IfYouJustSmile, and I had taken close-ups of different parts of my face and then posted two pictures side by side: one where I hadn’t been smiling, and another where I had. It showed the squint of my eyes, the crinkles along the sides of my nose, the indentations around my mouth, all of which formed the second I smiled. But in the pictures, I had never actually shown my mouth. Because we already know the problem there.

It could be fun.

It could be fun, at least, if Celia were there too.

I moan out loud to myself, taking my phone out from under my legs and opening the camera. Aiming the lens out the window, to the same backyard I’ve seen nearly every day of my life, I center the abandoned swing set and snap a picture. I then open PhotoReady, load the shot into a frame, choose the black-and-white filter, and type a caption: Old view.

And as I watch the photo load onto my screen, I wonder if I’m ready to start looking at something new. 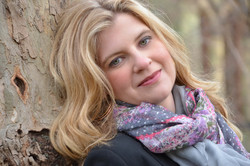 Allison Gutknecht grew up in Voorhees, New Jersey, with three fewer siblings than Mandy Berr. After graduating from the University of Pennsylvania, she earned her master’s degree in children’s media and literature from New York University. Allison lives in New York City with her rambunctious toy poodle, Gypsy, and her literate cat, Folly. She is a massive fan of polka dots.

Part of mix
By Allison Gutknecht
PRICE MAY VARY BY RETAILER