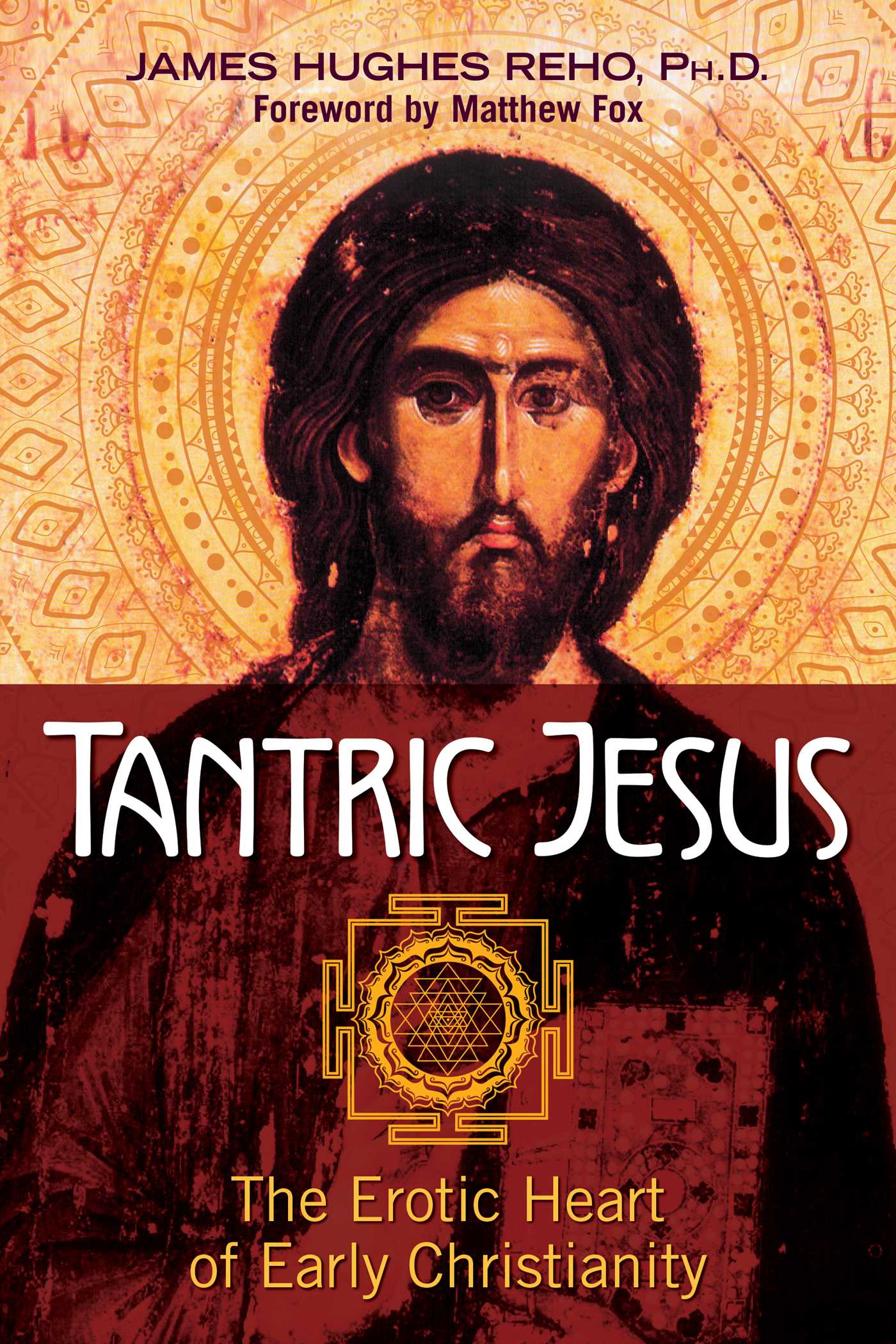 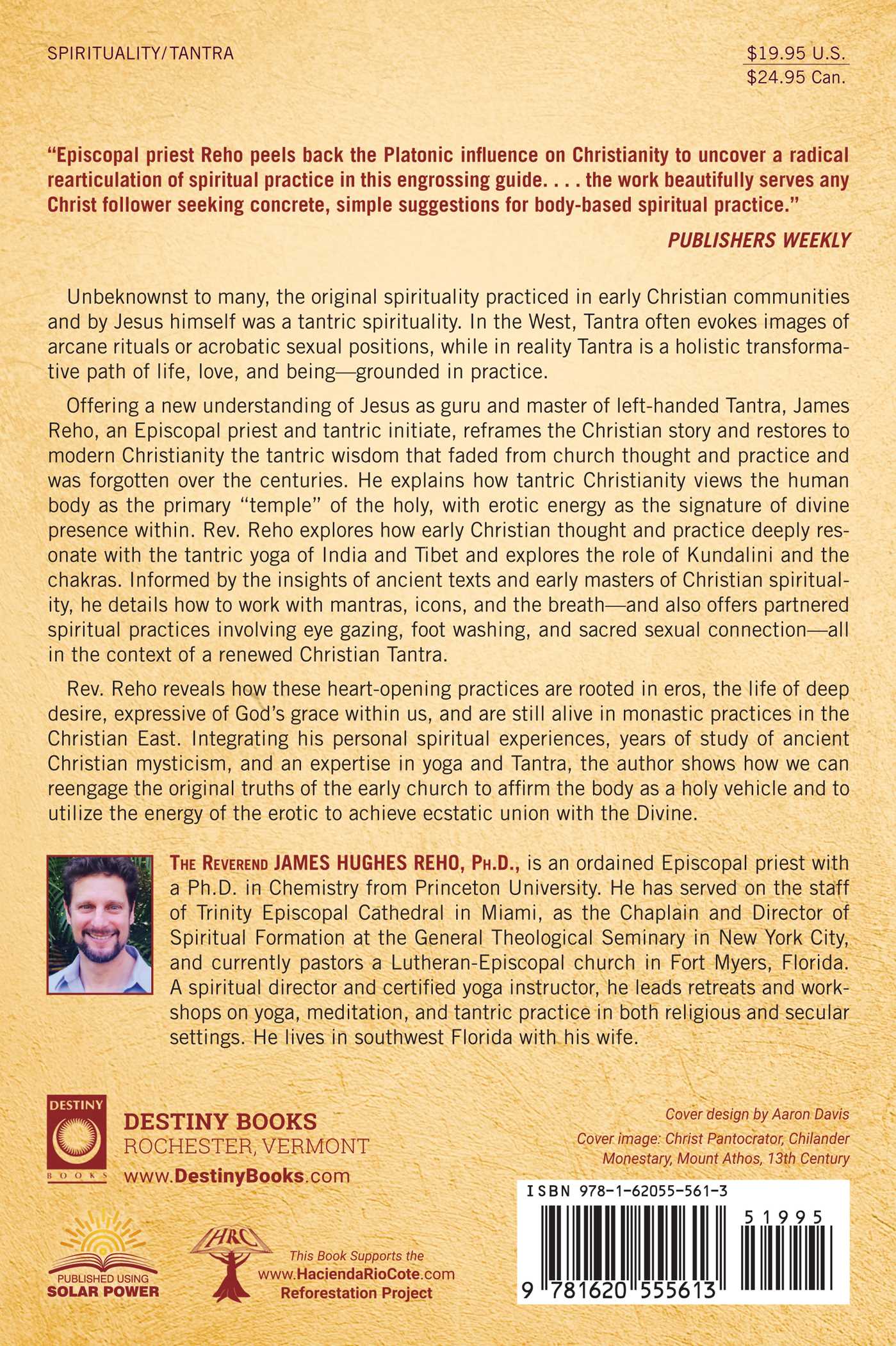 A guide to the history and modern practice of transformative Christianity

• Provides step-by-step instructions for a series of Christian tantric practices, including a partnered sexual practice, mantra and energy work, eye gazing, and work with icons

Unbeknownst to many, the original Christian spirituality as practiced in the early church and by Jesus himself was a tantric spirituality. In the West, Tantra often evokes images of arcane rituals or acrobatic sexual positions, while in reality Tantra is a holistic transformative path of life, love, and being--grounded in practice.

Offering a new understanding of Jesus as guru and master of left-handed Tantra, James Reho, an Episcopal priest and tantric initiate, reframes the Christian story and restores to modern Christianity the tantric wisdom practices that were edited out of church tradition and forgotten over the centuries. He explains how tantric Christianity views the human body as the primary “temple” of the Holy, with erotic energy as the signature of Divine Presence within. Rev. Reho reveals the similarities of the earliest Christian practices to the tantric yogas of India and Tibet and explores the role of Kundalini and the chakras. He details how to work with mantras, icons, and pranayama breathing exercises, as well as with gazing as a spiritual practice. Informed by the insights of ancient texts and early masters of Christian spirituality, the author provides step-by-step instructions on how to practice Christian tantric sex with a life-partner of the opposite or same sex.

The Sacrament of the Bridal Chamber

Sacred Sex and the Life of the Holy Trinity

With my body, I thee worship.
“Of Matrimony,”
The 1662 Book of Common Prayer

AN EXPERIENCE OF SPIRITUAL MAITHUNA

Lying on my back, I continued with the breath pattern given to me by my teacher. I tried to keep my inner vision blank, black, in order to move toward oneness with the cosmos, hoping for what Freud had called “the oceanic experience.” Soon, however, a column of blackness appeared within the blackness, beginning far above me and ending at my third eye, the space between my eyebrows. And then, in an instant, I was lying face to face, body to body, with the great saint Ramakrishna. As I lay on my back, Ramakrishna was on top of me, facing me: his arms, legs, torso, forehead, all pressed against my own. He was wearing only a white dhoti and I could feel the heat and hair of his body and the softness of his old skin against my own. His face met mine, nearly nose to nose, and his soft Bengali eyes penetrated my own from just inches away.

Immediately Ramakrishna was gone; instead, with a deep sound that seemed to come from the heartbeat of Reality itself, I was in thepresence of the Great Mother. She appeared in a form resembling the Indian goddess Durga. Her body was red and beautiful, and she had long, full, wild black hair. Her deep red face, with large dark almond eyes and perfectly formed features, was so beautiful that I could not sustain hergaze without beginning to lose my sense of myself; I had to keep looking away and yet I was continually drawn back to her.

She was seated upon a tiger-like animal that underlined the sense of raw power that came with her presence. She held a sword in one armand in one fell swoop leaned forward and severed my head, holding it like the goddess Kali. There was no pain. She lifted my head like a trophy and then tossed it aside. It was caught by Jesus, seated at a distance, who gazed upon my disembodied face, and with an inhalation, lovingly brought myhead into his abdomen, into his body.

Now Durga lifted me up with her upon the tiger. I sat behind her, with the front of my body pressed against the back of hers. Wherever my body touched hers—which was everywhere—there was a dizzying senseof interpenetration, a blurring of the boundary of where “I” stopped and
where “She” began. Our breath became one, as if she were breathing within me, and with each breath the sense of bliss grew until it was almost excruciatingly pleasurable. I fought to retain consciousness. The intense pleasure that came from this union with her divine body was like nothing I had ever experienced. As much as sex differs from a handshake, so this experience surpassed any physical sexual union.

During this time of oneness with her, I felt as if everything in me was being melted and reformed, the way the insides of the caterpillar
are liquefied in its transformation into a butterfly. I could never be the same. I had the clear sense, even at this time, that She was somuch more than what I was able to perceive . . . that the amount of beauty, bliss, and knowledge I was experiencing was limited by what I could take in and still remain self-aware: no one can see God and live (Exodus 33:20).

In Indian and Tibetan Tantra, one common picture of the nature of reality is the sexual union of Bhairava (Shiva in his “terrible” or intense form) and Bhairavi (Shakti in her intense form). An example of this embrace is found in figure. Bhairava sits cross-legged, with Bhairavi seated upon him, facing him, her legs wrapped around his lower back. She presses her heart to his and gazes up into his eyes. He returns her fierce and penetrating gaze with his own. They are bhira, or “terrible” (intense),(8) because they are locked in an ecstatic sexual embrace that includes but goes much deeper than genital union. In this great religious icon of eastern Tantra we experience the dynamic love and holy interplay of energy between Shiva and Shakti, who are not-two. The fecundity of their “twinning” (maithuna) allows the energy of the cosmos to circulate rather than stagnate.

Let us remember that we have already looked at how this holy image resonates with the Christian understanding of the Holy Trinity, with what the great theologian St. Gregory of Nazianzus called the perichoresis of the persons of the Trinity, the ecstatic and dance-like interpenetration of Father, Son, and Holy Spirit.9 In the theology of the Western church “the Father and the Son cause the Holy Spirit to proceed, inasmuch as they represent the one nature; while the Holy Spirit, who, for Western theologians becomes ‘the bond between the Father and the Son,’ stands for a natural unity between the first two persons.”10 In this common and favored conception of the Trinity in the West, the Holy Spirit is understood as the loving interpenetration of Father (Shiva, Bhairava) and Son (Christ-Sophia-Shakti, Bhairavi).

The Holy Spirit is the dynamic and constantly circulating energy that flows between the first two Persons of the Trinity, the Father and the Son. This Western Christian understanding of the Trinity harmonizes well with the image of Bhairava and Bhairavi generating the divine energy of love through their intimate and eternal embrace, and speaks to the deeply tantric genius at the origin of the Christian impulse.
James Hughes Reho

The Reverend James Hughes Reho, Ph.D., is an ordained Episcopal priest with a Ph.D. in Chemistry from Princeton University. He has served on the staff of Trinity Episcopal Cathedral in Miami, as the Chaplain and Director of Spiritual Formation at the General Theological Seminary in New York City, and currently pastors a Lutheran-Episcopal church in Fort Myers, Florida. A spiritual director and certified yoga instructor, he leads retreats and workshops on yoga, meditation, and tantric practice in both religious and secular settings. He lives in southwest Florida with his wife.

“This is a book for our times. Deeply feminist in nature, it offers the hope of freeing Western men and women from the limitations of a sterile understanding of Christ and Christianity. This freedom is essential if we are going to heal the divisions in humanity and heal our planet from the ravages of dualistic exploitation. I highly recommend this book to anyone interested in exploring their personal experience of Christ.”

“James Reho is truly on to something here. Please read this book. You will understand the great Christ yogi in a new and powerful way. You will make real use of the peace and power Jesus brought to human life.”

– Mark Whitwell, author of Yoga of Heart and The Promise

“James Reho calls us into the marriage of East and West, the conjoining of Heaven and Earth, the pregnancy of spirit and matter. Tantric Jesus is a courageous call into the frightening and freeing world of oneness.”

– John Philip Newell, author of The Rebirthing of God

– Russill Paul, author of Jesus in the Lotus: The Mystical Doorway Between Christianity

“As an Episcopal priest and a yogi, James Reho is a bridge between cultures and spiritual traditions. Tantric Jesus, his insightful and skillful first book, likewise bridges mind and spirit, theory and practice, erudition and accessibility, passion and rationality, the sacred masculine and the sacred feminine. The book is revolutionary without losing heart.”

“A brilliantly written and tremendously inspiring treatise on Tantra. A complete revelation!”

– Diana Richardson, author of The Heart of Tantric Sex

“For anyone who is longing to be transformed by the divine energies present in all of creation and the cosmos, Tantric Jesus is required reading, a sound and reliable guide for all who are traveling along the perilous but grace-filled path to the Heart of the Divine.”

“With scholarship as thorough as its topic is controversial, Tantric Jesus infuses the traditions of Christianity with the embodied practices of Hindu Tantra. . . . Do the practices in this book, and your understanding of the historical Jesus and the path of Christianity will never be the same.”

– Will Johnson, author of Breathing Through the Whole Body and Eyes Wide Open

“James Reho brings out hitherto unrealized parallels between the tantric mode of the East and Christian practice in the West. The heavenly and the earthly come together in this fascinating book. As a Christian, I am richer for having read it.”