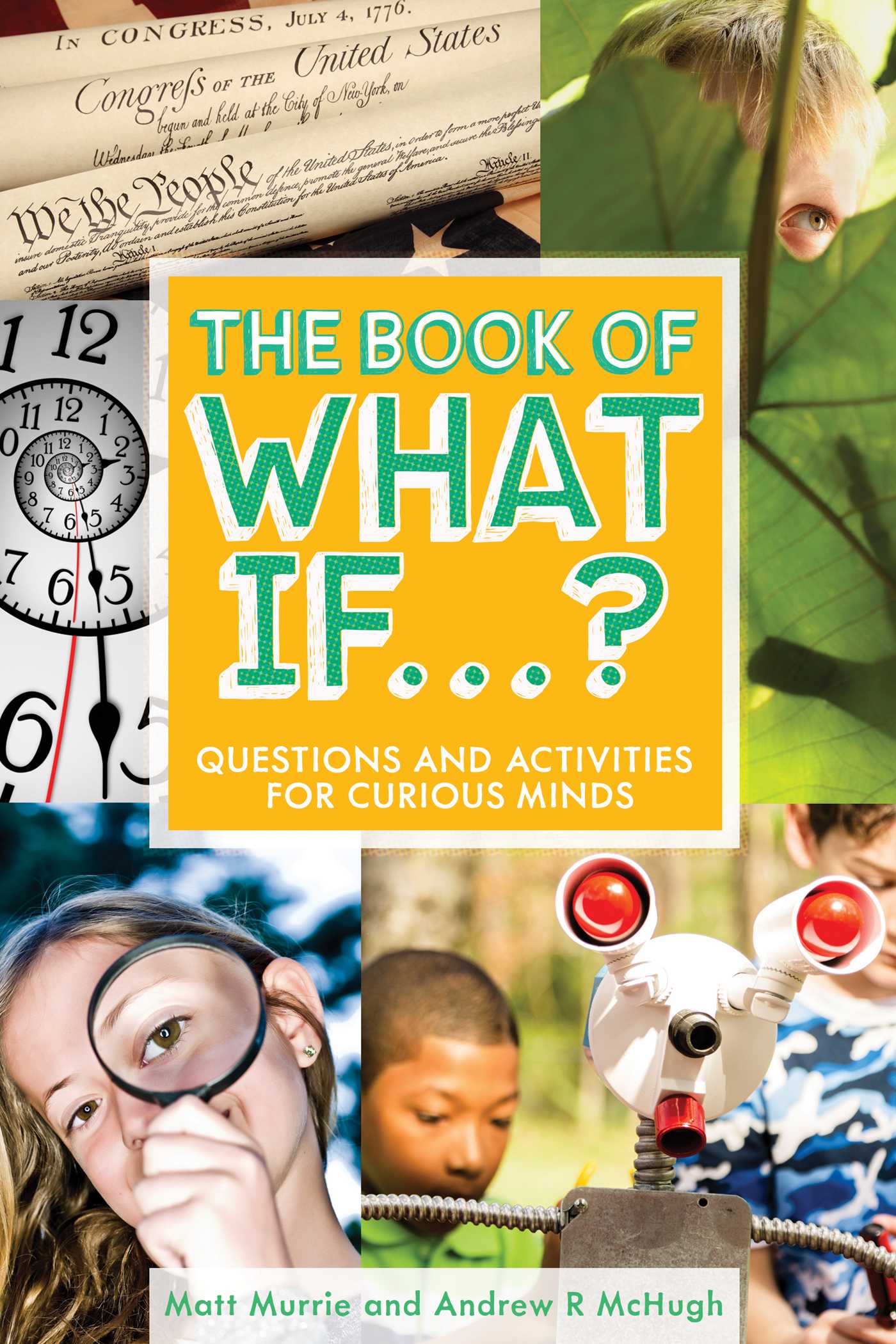 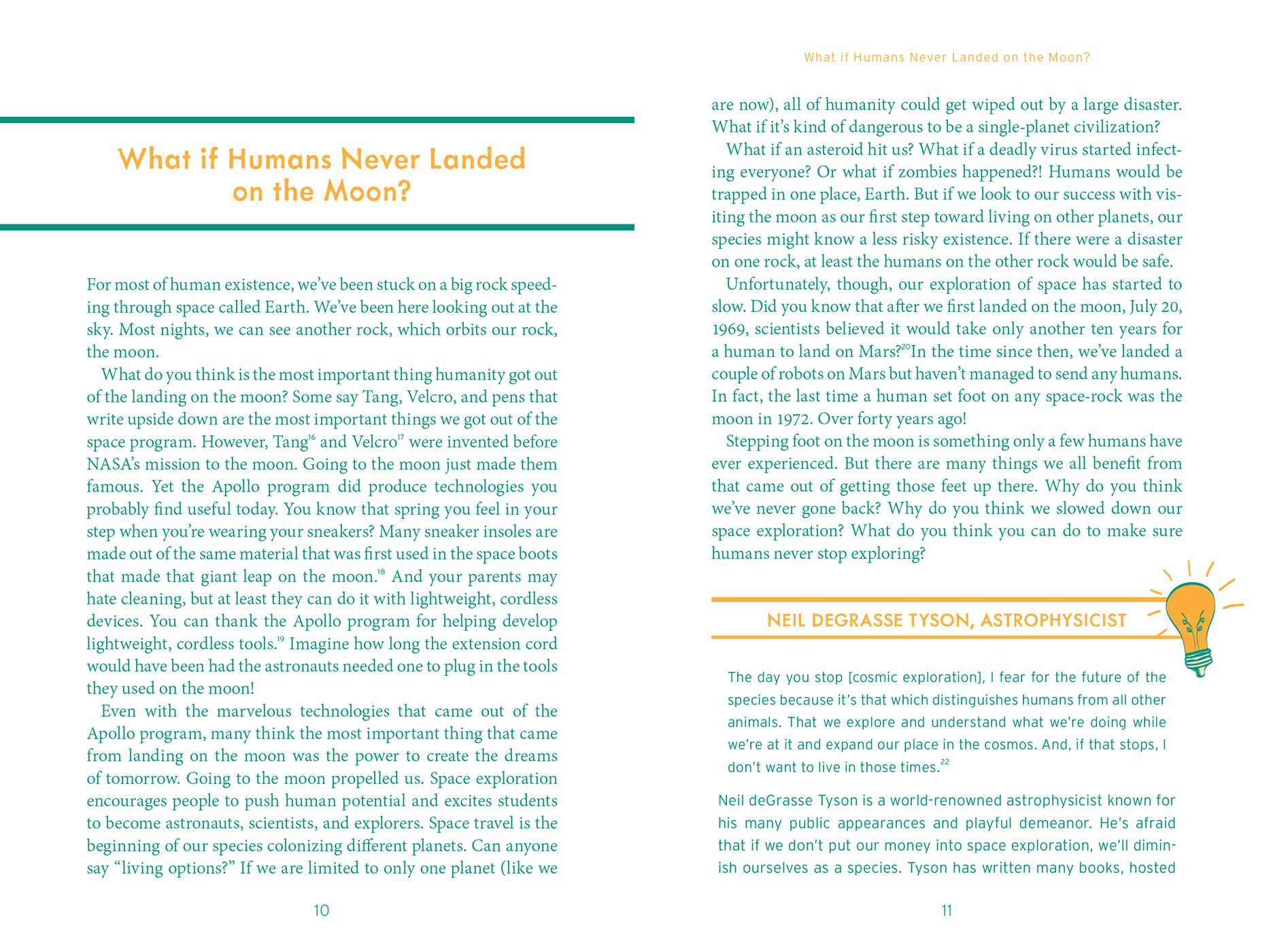 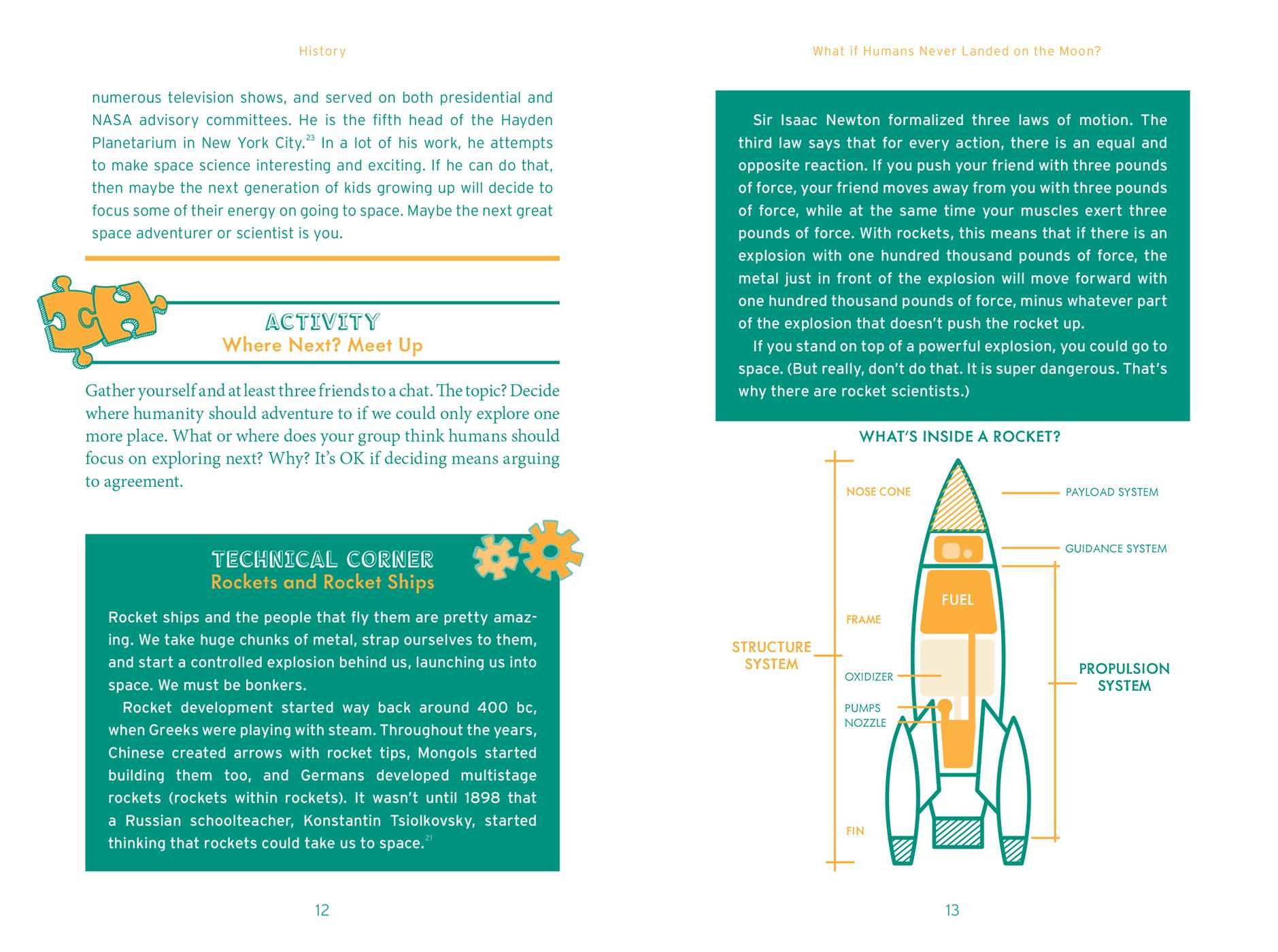 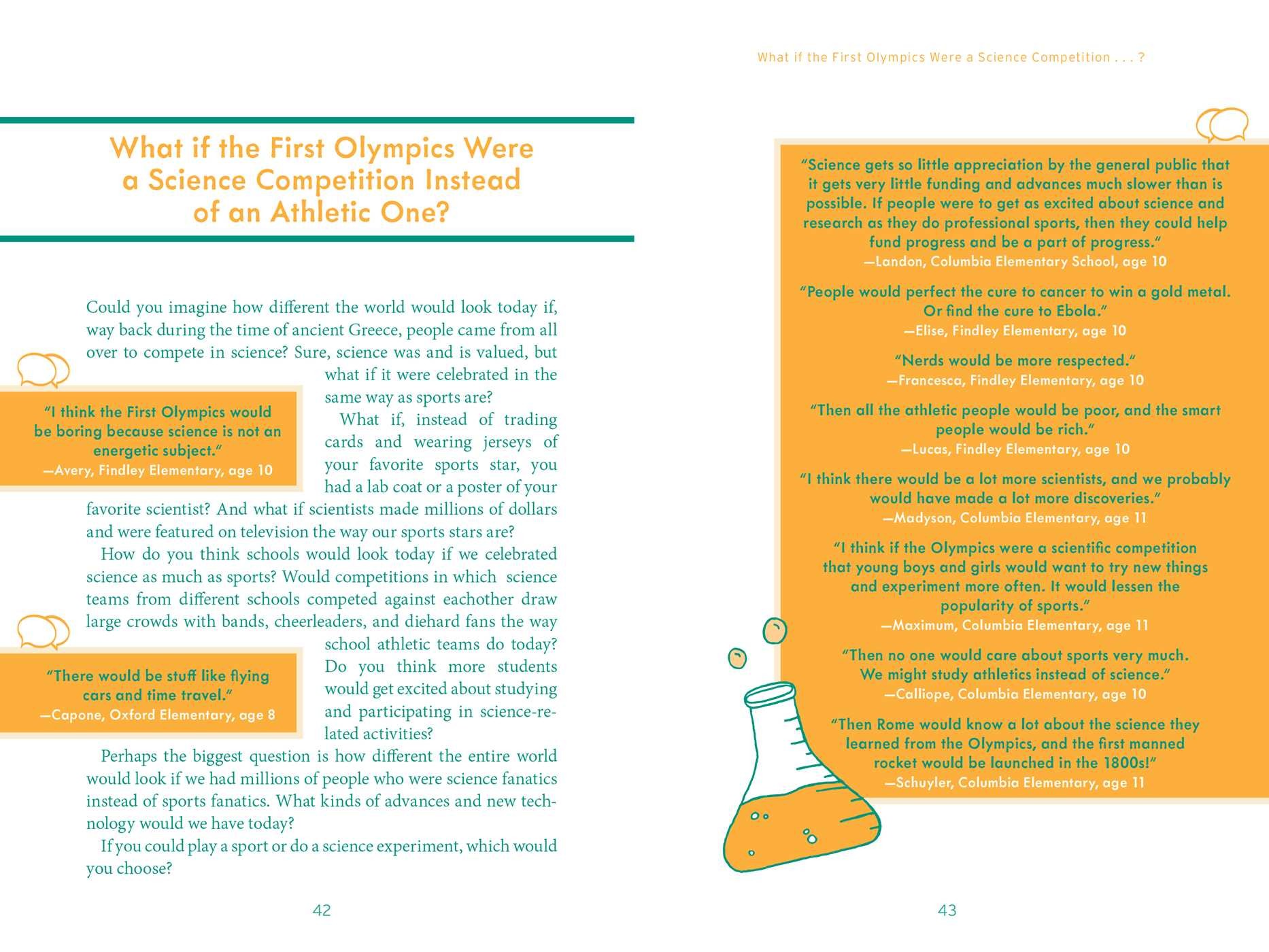 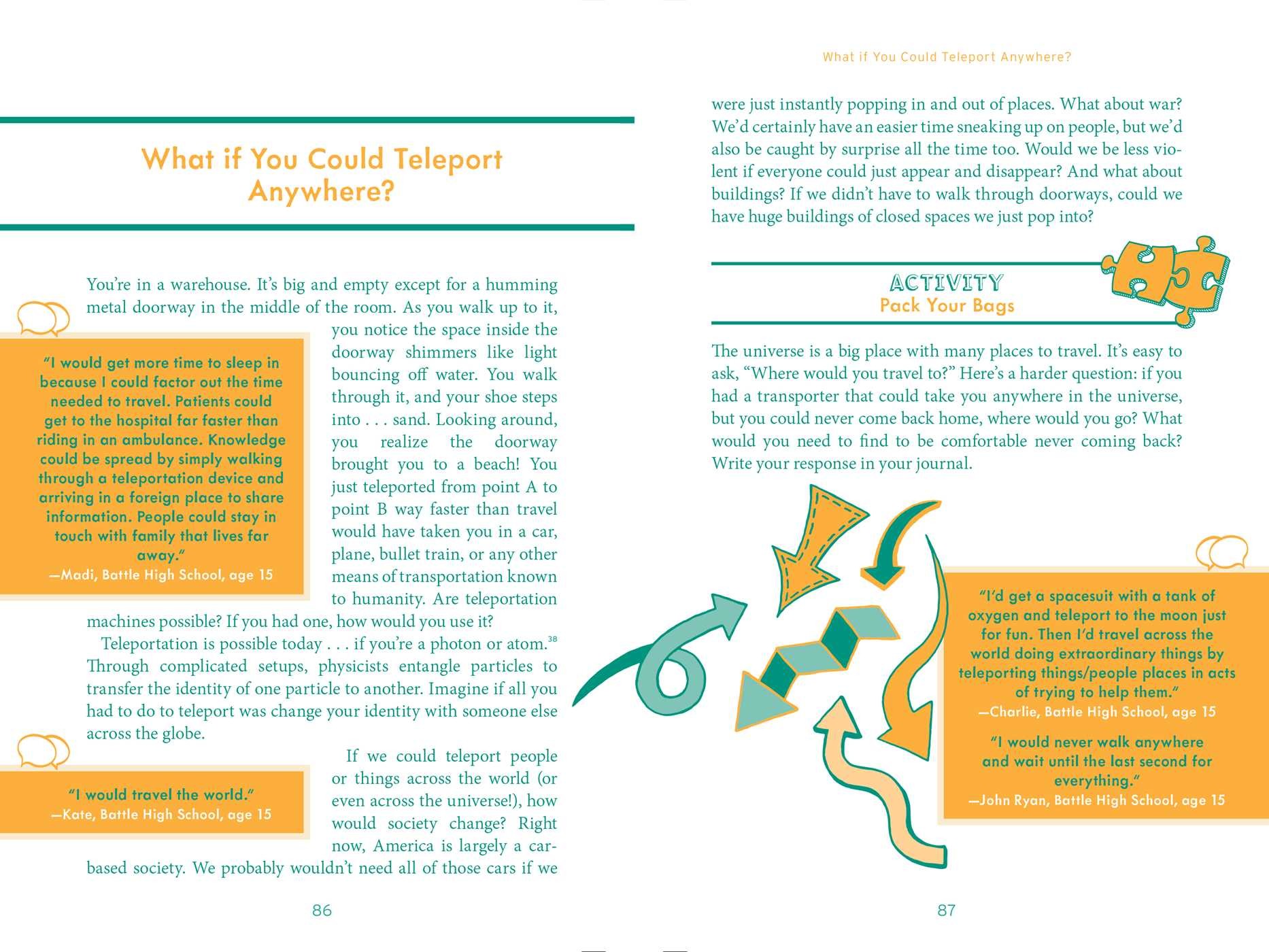 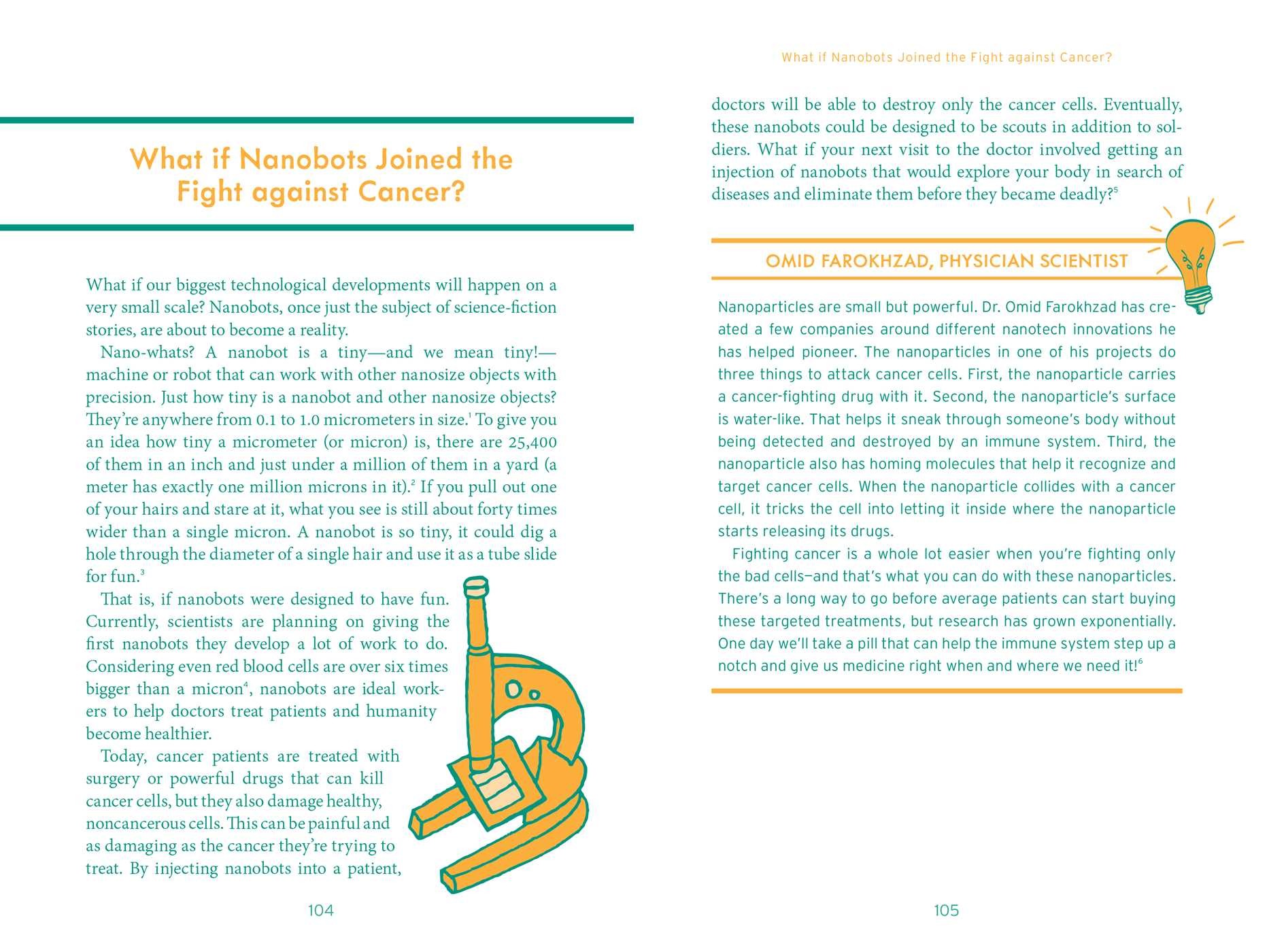 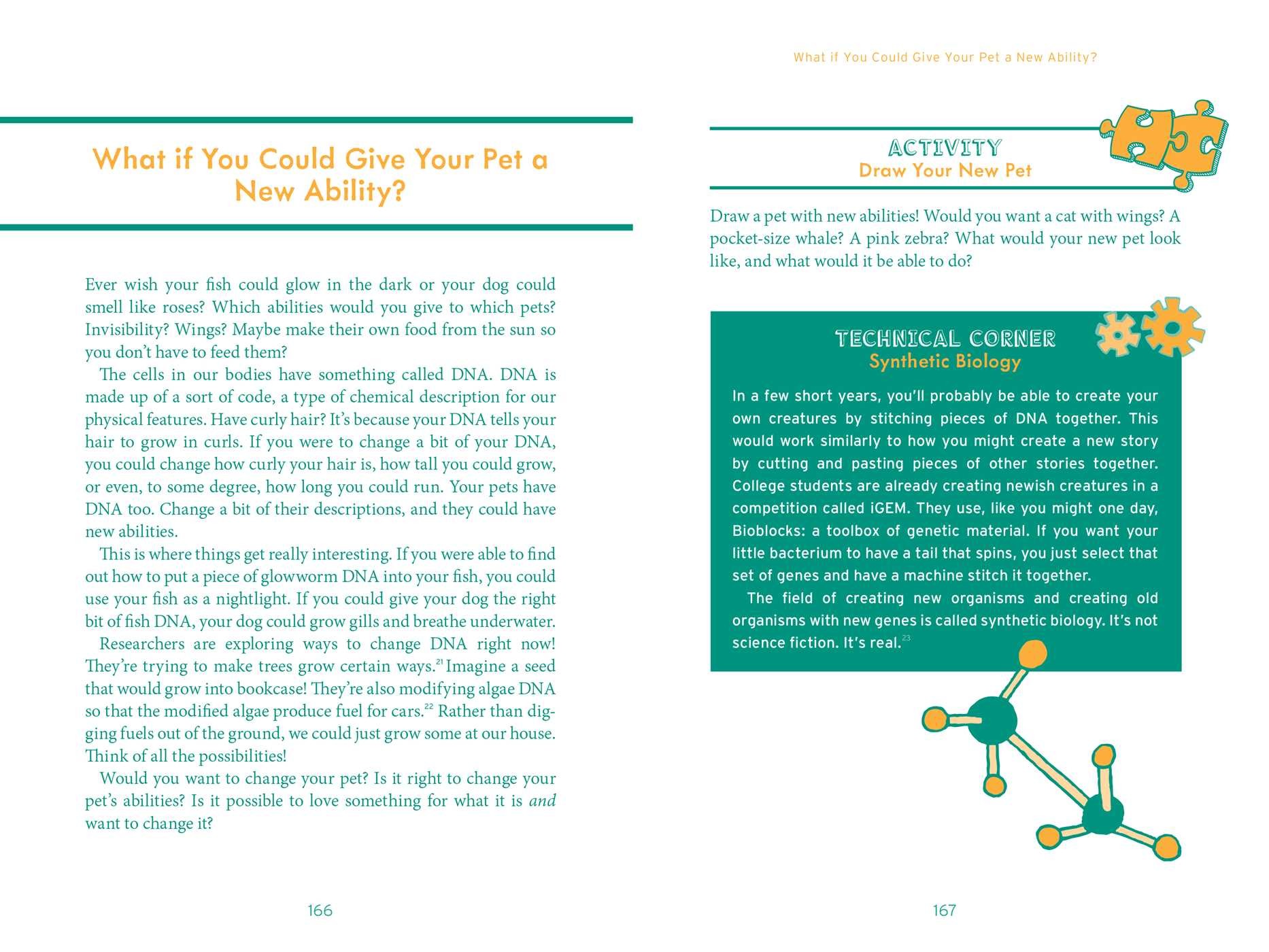 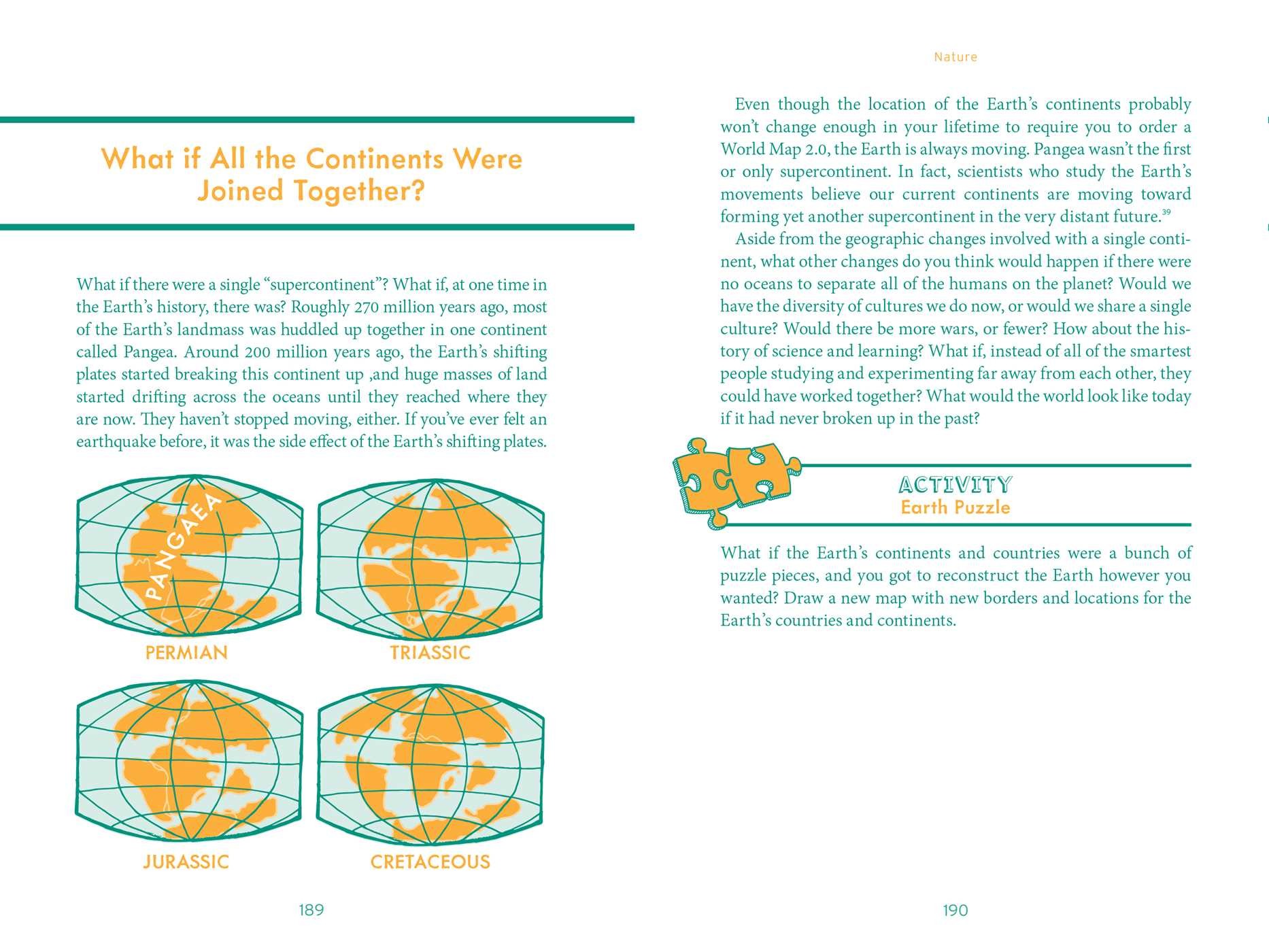 Questions and Activities for Curious Minds

From the creators of the What If…? Conference comes a quirky book that encourages kids to explore and engage with the world around them by asking more than eighty wild, absurd, and thought provoking questions.

What if a book didn’t just tell you how to think or what to know, but rather encouraged you to think for yourself? What if there was a book that focused on asking questions instead of just answering them.

The Book of What If…? does just that! What if you lived on a floating city? What if politicians were kids? What if broccoli tasted like chocolate? What if you could explore outer space?

By asking these fun, open-ended questions, this book fosters greater critical thinking skills and gives kids a space to interact by breaking out a notebook to draw or write out their personal reactions, or engage in entertaining exercises with family and friends. Plus, sidebars deepen the investigation with peer-to-peer insights, historical and current profiles, real-life examples, and more, making for unlimited learning opportunities!

Divided into sections—history, people, stuff, and nature—along with four introductory text to open up a dialogue about why it’s important to be inquisitive and to always ask questions, The Book of What If…? is sure to be a hit with kids, teachers, and parents alike. So ask a question and let the answers lead you on an exciting journey filled with endless opportunities to learn!

The Book of What If . . . ? What if Dinosaurs Hadn’t Gone Extinct?
If you’ve done any digging around on dinosaurs, you’ve probably discovered that the word dinosaur means “terrible lizard.”?1 But this isn’t entirely true. The actual translation for the Greek prefix deinos is “fearfully great.” The inventor of the word dinosaur, Richard Owen, intended the word to inspire awe, not terror.2 Over time, people have turned “fearfully great” into simply “terrible.”

“I would have a pet velociraptor. And we could buy dinosaurs at dino dealerships because there would be no need for cars because you just ride your T. Rex where you need to go.”

The second half of the word dinosaur comes from the Greek word sauros, which means “lizard.”?3 Even though many originally thought dinosaurs were lizards, scientists have now determined that they weren’t. Interestingly enough, birds and lizards both seem to be descendants of dinosaurs (though different ones).4 The more we learn about dinosaurs, the more ways we find how they differed from the reptiles we have today, including lizards.

But what if we had more than just a bunch of bones to go by to understand dinosaurs? What if dinosaurs were alive today?

“I would train a dinosaur to let me ride it to school.”

There are several questions to consider here. Perhaps the most urgent one is: who would “rule” the earth—dinosaurs or humans?

Looking around today, humans have been able to create an existence at the top of the food chain, and we’ve been able to develop technologies that move us further from the natural world. Do you think humans could have evolved in this manner if we had to compete against (or run away from!) dinosaurs all day long?

“The bigger dinosaurs would be hunted and the smaller ones domesticated as animals of labor.”

What if, instead of finding a neighbor’s dog digging a hole in your yard, you saw a triceratops digging a hole? What if, instead of being afraid of bee stings when playing outside, you had to look out for pterodactyls swooping down from the sky to scoop you up for dinner? What if every day on your way to school, you were chased by a Tyrannosaurus rex? Could you tell your teacher a T. rex ate your homework?


ACTIVITY Dino-Proof Your House
Imagine you live in a neighborhood struggling with an overpopulation of dinosaurs. They’re everywhere! Many people have come home to find dinosaurs in their yards eating their plants and leaves off their trees. Some homes have even been stepped on by dinosaurs—and crushed to smithereens, of course. What do you do? How can you save your home?

Draw a picture of what your home would look like once it’s been “dino-proofed.”


MARY ANNING, DINO-DISCOVERER
If you look around, you’ll notice that there are not many creatures that look like the ones that were alive in the time of dinosaurs. The dinosaurs went extinct and some of them were fossilized. Many, many years later, a set of apes evolved into humans, and many years after that, we started fossil hunting. Mary Anning was an expert fossil hunter.

“If dinosaurs never went extinct, humans would have very slim chances of survival with how dangerous the world around us would be. Perhaps this would create a different society that focuses more on survival and protection rather than the society we have developed in which survival isn’t always immediately on our minds.”

Sometime between 1809 and 1811, when she was only 10 to 12 years old, Anning and her brother found one of the first ichthyosaur fossils (an ichthyosaur looks kind of like a dolphin). Her whole family hunted fossils, but Anning was the most dedicated. She went on to find many other ichthyosaur fossils, but her greatest find was of the first plesiosaur (a swimming dinosaur with a long neck like a giraffe). Anning was a well versed paleontologist (person who studies fossils), an expert at finding, drawing, and analyzing skeletal remains of dinosaurs.5 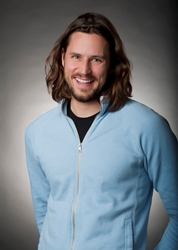 Matt Murrie works to live in a world where people prefer finding solutions to complaining about problems, where people seek answers through questions, and curiosity is treated like the natural resource it is. Endlessly curious in and fascinated by the spectacular diversity of people and places that make up the universe, he’s taught for over a decade across five countries and three continents. He’s a returned Peace Corps volunteer who has written six books with his father, Steve Murrie. Matt also taught English literature, writing, and entrepreneurship at Westminster College and blogged on the Huffington Post. Today, he’s a social entrepreneur and “edupreneur” working full-time as the Executive Director and Chief Curiosity Curator for What If…? 360. 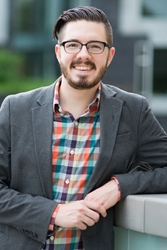 Andrew R McHugh breaks down complexity into understandable and useable chunks. He is currently a Masters student at Carnegie Mellon University, studying human-computer interaction. Previously, he co-founded the What If…? Conference, What If…? 360’s predecessor. Andrew left in 2014 and has been designing and developing user experiences ever since. Actively curious about many things, he has a background in design, philosophy, technology and people, mathematics, and physics. During his undergraduate years, Andrew built a bikeshare program, led a movement for systematic sustainability change, and researched brain-computer interfaces, and digital divide/differentiation problems. In his free time, he tinkers on his next project and listens to music louder than necessary.

What if a book could inspire curiosity? Almost 100 questions, all beginning with “What if” and divided into history, people, nature, and “stuff” categories, encourage readers to consider the world around them. Each question is followed by a short explanation of the topic with related questions and areas to pursue. For instance, questions like “What if computers were conscious?” and its accompanying information on artificial intelligence show readers how a thought could lead to reality. Other questions—such as “What if dinosaurs didn’t go extinct?” “What if humans had elephant noses?” and “What if you had no possessions?”—guide children to see the impact of events and possibilities within the impossible or within their own lives. At the heart of each question is a call to creativity, knowledge, entrepreneurship, or activism. Most of the questions also include activities to help kids explore the topic in more depth, as well as biographical and technical profiles. Concluding “curious resources” extend the possibilities in this blend of philosophy, science, and the arts.— Angela Leeper

Murrie and McHugh—creators of the What If...? conference, which aims to inspire curiosity, critical thinking, and innovation by asking hypothetical, even ridiculous-seeming questions—present a book designed to do the same. Divided into sections titled History, People, Stuff, and Nature, the book features more than 80 questions, such as “What if Poland joined Germany in 1939?” “What if you could move objects with your brain?” and “What if humans had elephant noses?” Profiles of experts, relevant sidebars, and kids’ answers accompany explorations of each question, while occasional activities range from creating an idea notebook to crafting a map of the Earth that mixes up continents and borders. The serious treatment of sometimes silly ideas drives home the notion that there really is no such thing as a stupid question. Ages 8–12.

Questions and Activities for Curious Minds