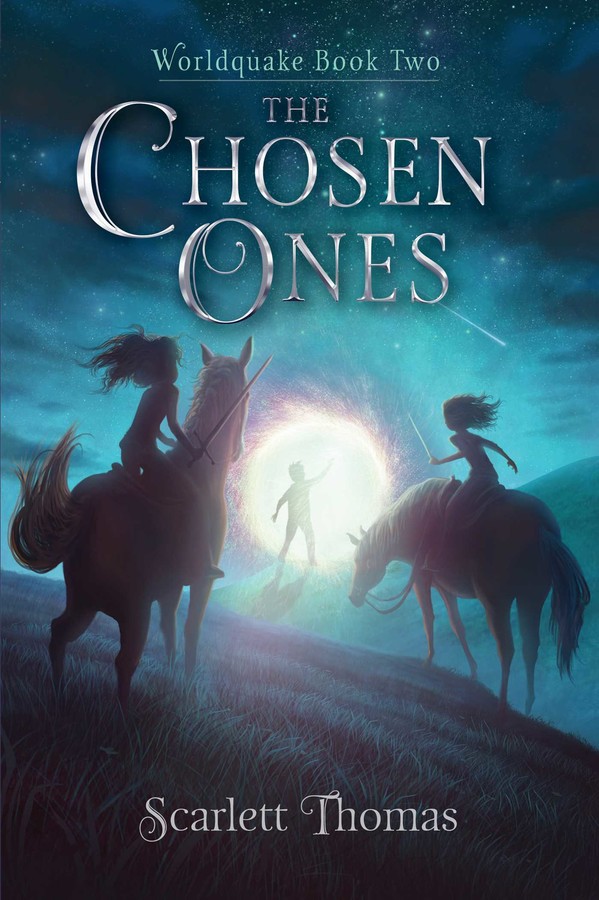 Effie and her gifted friends—Raven, Maximillian, Lexy, and Wolf—embark on another adventure to save the world from the evil Diberi. The second book in the magical Worldquake series, that’s “tailor-made for Harry Potter’s fans” (Kirkus Reviews), will leave you utterly entranced.

Effie Truelove has just been expelled from magic class and now she can’t even get back to the Otherworld—the place she most loves and where she feels she belongs. If she can find a copy of The Chosen Ones by Laurel Wilde to give her father then she might be able to fix everything.

The only problem is that there are suddenly no copies of the book anywhere, because Albion Freake, the richest man in the world, is paying for them to be destroyed so that he can own the single-volume limited edition that publisher Skylurian Midzhar is making for him.

Raven Wilde’s witch’s intuition tells her there’s something suspicious about Skykurian’s plan, but she’s not sure what it is.

And Maximilian has somehow managed to go missing deep in Napoleonic Europe.

Will the five friends from Dragon’s Green—Effie, Raven, Maximilian, Lexy, and Wolf—be able to combine their skills again to save the world from the Diberi? And can they get away from Terrence Deer-Hart, the children’s author who seems a bit too interested in Effie’s life?

The Chosen Ones 1
ORWELL BOOKEND WAS NOT a very happy man. At this moment, with a small bat peering at him with its peculiar upside-down eyes, he wasn’t sure if he’d ever been happy. Perhaps he had been happy once, a long time ago, when his first wife, Aurelia, had still been around. Before his daughter Effie had got so out of control. And before he had climbed into this dusty attic without changing out of his work suit.

Where was that blasted child? Probably out dabbling in “magic” somewhere with her deluded friends—that fat, bespectacled boy, and the girl who seemed to wear nightgowns all the time. Well, Effie would certainly be in trouble when she got home. She must have been up here in the attic, Orwell concluded, and taken the book already. The Chosen Ones by Laurel Wilde was nowhere to be found. Which was the main thing currently making him extremely unhappy.

Orwell Bookend’s unhappiness had started, like much unhappiness, when the prospect of happiness had been dangled in front of him and then cruelly snatched away. This had happened approximately forty-five minutes before. While he had been listening to the radio in the car on his way home from the university, a competition had been announced.

Orwell Bookend loved competitions. He didn’t admit this to most people, but they even made him happy. Well, until he lost. Every Friday he carefully filled in the prize cryptic crossword from the Old Town Gazette and sent it off to a P.O. box address in the Borders. Over the years the cost of the stamps had far exceeded the value of the prize, which was a fifteen-pound book token, but Orwell would not rest until he had that book token, which he planned to have framed and put up in his office.

The second thing that made Orwell Bookend happy was acquiring money, even though he wasn’t very good at it (as demonstrated by the business with the book token). If he could only find the book—the hardcover first edition of The Chosen Ones that Aurelia had bought for Effie all those years ago—then he would have the chance to enter a competition and make money. That was what it had said on the radio. Anyone lucky enough to own an original copy of The Chosen Ones was to take it to the Town Hall on Friday, where they would be given fifty pounds in cash and a chance to win unlimited free electricity for life. And anyone with a normal paperback copy of the book could swap it for a tenner.

Fifty pounds had become rather a lot of money since the worldquake had happened five years before. After the worldquake, the economy, like many other complex systems, had become tired and sulky and had started to misbehave. It certainly no longer had any interest in following a lot of silly mathematical rules. Today fifty pounds was definitely worth having, although who knew about tomorrow?

But unlimited free electricity for life? Now that really was a prize worth winning. After all, no one, no matter how rich, had access to unlimited electricity, not since the worldquake. Well, no one, of course, apart from Albion Freake, the man who happened to own all the electricity in the world. For some reason his company, Albion Freake Inc., was giving away this huge prize, and putting up all the cash, too. All Orwell Bookend had to do was find the book. Of course, it wasn’t really his book. It was Effie’s. But that didn’t bother Orwell Bookend in the slightest.

Dr. Green’s head looked like a boiled potato. Not a nice normal boiled potato that had been rinsed and peeled before cooking, but an old dry potato with leathery skin that had been left in the ground too long, and, despite having been boiled, still had strange clumps of hair sprouting from it. To Maximilian Underwood these clumps looked like roots that had bravely ventured into the light and then promptly died.

Dr. Green was in the middle of an educational story—the worst kind of story, in Maximilian’s opinion—in which a poor little impoverished child has been given a pair of battered old running shoes by a mysterious hunchbacked crone in a food bank.

“The old lady whispers to the child that the shoes are magic,” said Dr. Green, in a voice that was sort of soft and wet and greasy, like margarine. Maximilian knew exactly what was going to happen in the story. Everyone, surely, knew what would happen in the story. Dr. Green continued telling it anyway.

The next day the child puts on the shoes and wins a race with the fastest time ever recorded. Then she gets discovered by a famous sports coach, who implores her to wear better running shoes. Of course, she refuses to wear anything but her tattered-looking “magic” shoes. Eventually, the inevitable happens. The girl’s rival steals the shoes and hides them. The girl is forced to compete in normal shoes. And of course she still wins. Moral: It was never about the shoes. The end.

He walked over to a blackboard on wheels that lived in a cupboard for the rest of the week and only came out on Monday nights for these classes, which were supposed to be for Neophytes—newly epiphanized people, mainly children—to learn the basics of magic. This was Maximilian’s first class. He hoped for bubbling cauldrons at the very least, and ideally things flying around the room and catching fire. But no. It was all very boring.

On the blackboard was a list of things that were forbidden for Neophytes which had been the subject of most of the class so far.

Neophytes must NEVER do magic without supervision of an Adept (or higher).

Any Neophyte who brings a boon to class will have it CONFISCATED.

Neophytes are FORBIDDEN from discussing magic outside of this classroom.

Any Neophyte who travels, or attempts to travel, to the Otherworld will be VERY severely penalized.

Neophytes are forbidden from exchanging any boons, maps, spells, information, or knowledge of ANY kind relating to magic or the Otherworld.

Neophytes must never mention the Otherworld at ANY time to ANY person.

It was even worse than normal school. And it was colder, too. Dr. Green’s weekly class was held in a very dusty old church hall with a wooden floor and huge enameled white radiators that made constant creaking and groaning sounds but never emitted any heat. Each radiator had a china teacup underneath it to catch the drips. There was a flourescent light that flickered dimly during the short periods the electricity was on. But the room was mainly lit with candle-lamps.

Maximilian looked at the list again. It just so happened that he had already done most of the forbidden things on it, and he didn’t care one little bit.

His friend Effie Truelove had pretty much done all of them. She’d certainly been to the Otherworld. Maximilian felt faintly proud that he himself had done some things that weren’t even on the list, like attempting to travel to the Underworld, and reading someone’s mind.

Still, it was lucky that Lexy Bottle had warned Maximilian and Effie not to bring their boons to class. Apparently, if Dr. Green took your boons away you never saw them again. Maximilian’s boons—the Spectacles of Knowledge, and the Athame of Stealth—were at this moment hidden safely under his bed at home. He’d used a minor cloaking spell to hide the athame from his mother, in case she randomly decided, as she sometimes did, to tidy his bedroom. His mother knew he had epiphanized and was a scholar, of course, but he hadn’t yet owned up to the fact that he was also a mage. He wasn’t sure his mother would like that.

Outside the classroom a barn owl hooted and a gentle frost started to spread itself quietly in hollows and on the high moors. Deep in the black sky a meteor fizzed and then died. It was getting late. All the candles in the room seemed to flicker and dance as one. At this moment all Maximilian wanted was his bedtime snack—three coffee creams and a glass of goat’s milk—and then a lovely, long, peaceful . . .

On Lexy’s other side, Effie Truelove was dropping off too. What was wrong with them both? This class was the very most exciting thing Lexy Bottle had ever experienced. Lexy was going to learn how to be a great healer. She was going to find someone to take her on as an Apprentice, and then she was going to be . . .

Lexy had already turned the page in her new notebook and written the date and the tasks with her new ink pen. She was sure she already knew all the answers. But before the children could get started, the church bell struck nine, which meant it was time for everyone to go home. So soon! Lexy could happily have spent all night soaking up Dr. Green’s wisdom.

“You can complete the task for homework,” said Dr. Green, “to be handed in at the beginning of the class next Monday at seven p.m. Thank you, everyone. Don’t stampede out the door! Oh, and Euphemia Truelove? A word, please.” 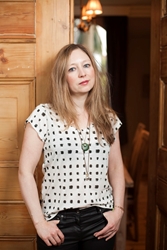 Scarlett Thomas was born in London. She is the author of the Worldquake series. She is also the author of nine books for adults, including PopCo, The End of Mr. Y, which was longlisted for the Women’s Prize for Fiction in 2007 (formerly known as Orange Broadband Prize for Fiction), and Our Tragic Universe. She teaches creative writing at the University of Kent. Find out more at Worldquake.co.uk.

"A rich, original, and imaginative sequel for fantasy fans."

More books in this series: Worldquake