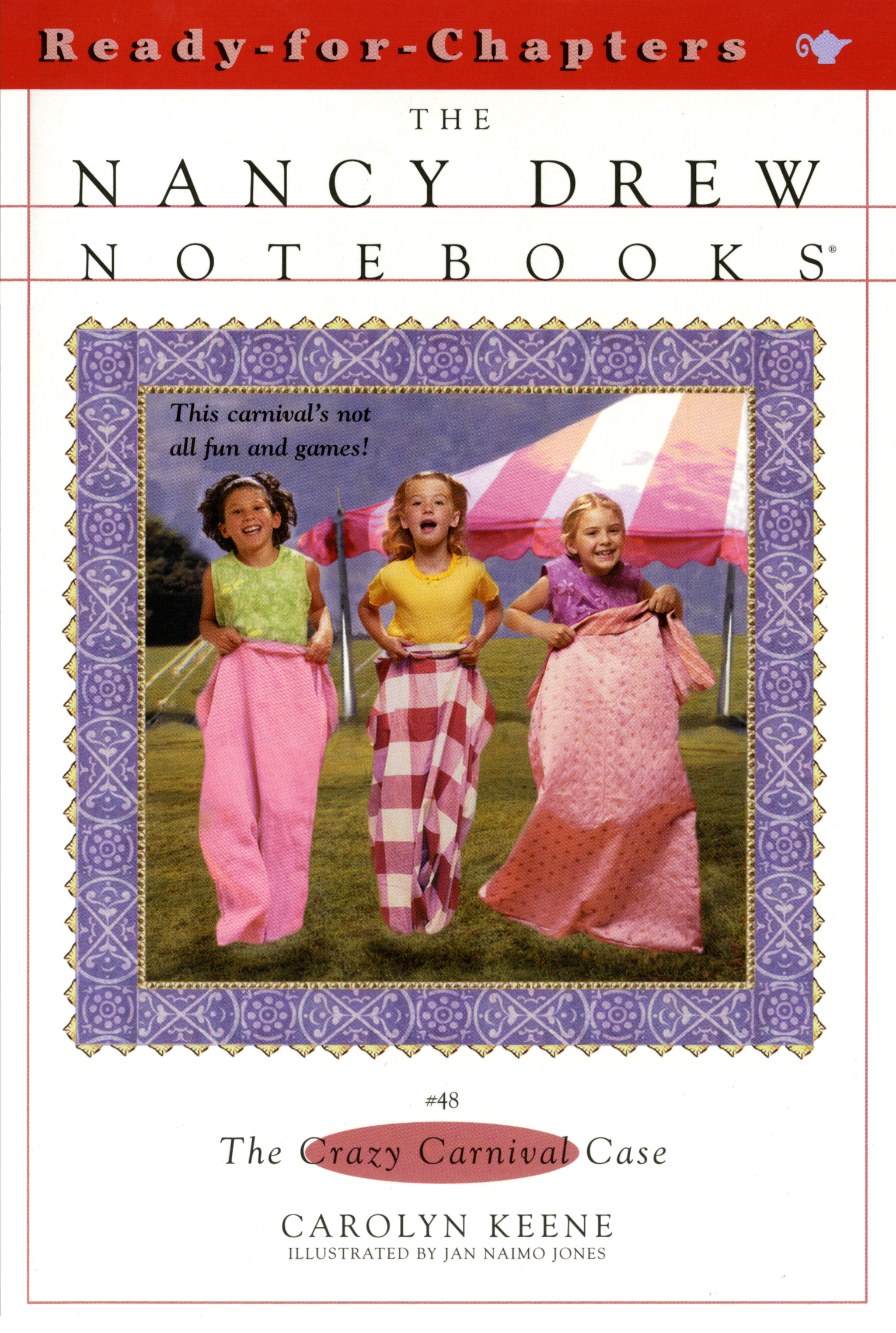 Nancy, Bess, and George are having a blast at the River Heights Carnival, sampling yummy snacks and trying to win prizes. Most of all, the girls can’t wait for their favorite local singing star, Isabelle Santoro, to perform. But Isabelle may cancel if she finds out that someone’s ruining all the fun with really annoying pranks.

Snooty Brenda Carlton, annoying Orson Wong, and Chloe “Cruncher” Mondesky, the pie-contest queen, all make good suspects. Nancy’s clue book is filling up, and she’s got to solve this puzzle fast—so the fun, and the show, can go on!

"I know," Bess Marvin said. She licked whipped cream off her thumb. "But practice makes perfect. This is just a sample."

George Fayne, Nancy's other best friend, leaned her elbows on the long picnic table inside the tent where the contest was about to take place. George's real name was Georgia. "When aren't you practicing, Bess?" she asked.

Nancy smiled. It was a sunny Monday in late June. School was out for the summer. It was also the first day of the River Heights Carnival. The girls were excited to be there.

The carnival was held every year behind Riverbank Middle School. For a whole week people came to enjoy the games, contests, and yummy food. There was even a piano-playing chicken named Henrietta Von Peck.

The girls had permission to go to the carnival every day. But this year would be extra-special. The girls' favorite singer, Isabelle Santoro, would be singing at the carnival on Thursday.

Isabelle was fifteen years old and lived in River Heights. She had sung on the TV show Mr. Lizard's Funhouse twice and even had her own song on the radio.

"Look!" Bess said, pointing. "That must be first prize!"

Nancy looked to see where Bess was pointing. A giant stuffed panda stood near the opening of the pie-eating tent.

"I just remembered something," George said. "Isabelle once told Mr. Lizard that she collects pandas."

"I know!" Nancy said. "If one of us wins the pie-eating contest, let's give the panda to Isabelle."

The three friends gave one another high-fives. Then a tall girl with short brown hair walked into the tent.

"Oh, no!" Bess wailed. She tugged at her blond ponytail. "It's Chloe Mondesky!"

"You mean Cruncher Mondesky." George groaned. "We don't have a chance."

Nancy's heart sank. Cruncher was eight years old and went to school in the next town. She had been the pie-eating champ for two years in a row.

Cruncher grinned as she ripped open a jumbo chocolate and caramel candy bar.

"Or just warming up," George said. Her dark curls bounced as she shook her head. "Cruncher eats everything in sight."

"Not everything," Bess said in a whisper. "Last year I heard Cruncher tell someone that she hates coconuts."

"Big deal," Nancy said. "The pies in the contest are banana cream. They are every year." Cruncher took a seat at the table. There were six other tables in the tent. All of them were filled with hungry kids.

"Excuse me," a girl's voice broke in. "Is this the place for the pig-out contest?"

Brenda was in the girls' third-grade class at Carl Sandburg Elementary School. She was very nosy and very snooty.

"It's the pie-eating contest," Nancy corrected. "Did you enter, too, Brenda?"

Brenda took a seat at Nancy's table. "No way," she said. "I'm writing about the carnival for my newspaper, the Carlton News. It comes out once a week, you know."

"And you remind us about it every single day," George complained.

"Why don't you write about Isabelle?" Bess suggested. "She rocks!"

"She sings like a parrot with crackers in her mouth," Brenda said.

"It's Simon the Pieman!" Nancy said.

Simon's booth at the carnival looked like a fairy-tale cottage. He sold the yummiest mini-pies. They had names like Little Boy Blueberry and Mother Gooseberry.

Even Simon's kids -- triplets -- got into the act. Every summer Nicky, Vicky, and Ricky dressed up as the Three Little Pigs. Their job was to walk around the carnival reminding everyone to try Simon's pies.

"Are you kids ready to dig into my pies?" Simon called out. He walked around the tent, putting a pie in front of each kid.

"Not yet," Bess said. She neatly laid a napkin over her crisp white pants. "Don't you want a napkin, George?"

"What for?" George asked. She rolled up the sleeves of her T-shirt.

"What will you do if you get whipped cream all over you?" Bess asked.

George shrugged. "Lick it off!"

Nancy giggled. She still couldn't believe Bess and George were cousins. They were so different.

Nancy brushed back her reddish blond hair and grabbed her pie. She was about to lean over when she heard a loud splat.

Glancing to the side, Nancy saw Cruncher. Her whole face was buried in her pie.

"Sorry," Simon said. "But Shirley Vega wanted a new flavor this year. And she's the director of the carnival."

"You mean she wanted a new champ!" Cruncher growled. "I wouldn't eat coconuts if I were stranded on a desert island!"

Cruncher grabbed a wad of napkins and wiped cream off her face. Then she ripped into another candy bar and stormed out.

"What a story!" Brenda exclaimed. She began writing as she left the tent. "Champ loses title but not her appetite!"

Nancy shook her head. Couldn't Brenda write about something nice for a change?

The contest went on without Cruncher. Nancy, Bess, and George ate as fast as they could. But in the end, the winner was a nine-year-old boy named Tyrone.

"Oh, well." Nancy sighed as Tyrone took the panda. "So I won't be the pie-eating champ this year."

"But you'll always be the school's best detective," Bess pointed out.

Nancy smiled. She did love solving mysteries more than anything. She even had a blue detective notebook where she wrote down all her suspects and clues.

The girls left the pie-eating tent and walked through the carnival.

Nancy hardly recognized the middle school. Game booths and food stands were lined up next to the building. On the soccer field stood a kiddy Ferris wheel, a bouncy castle, and a twenty-five-foot caterpillar tunnel.

Nancy could hear croaking sounds coming from the frog-jumping contest on the basketball court.

"We have a whole hour before Bess's mom picks us up," Nancy said, glancing at her watch. "Why don't we play some -- "

Nancy didn't finish her sentence. Something cold and wet landed on her right shoulder. She looked over and screamed.

Sitting on her shoulder was a big, slimy bullfrog!