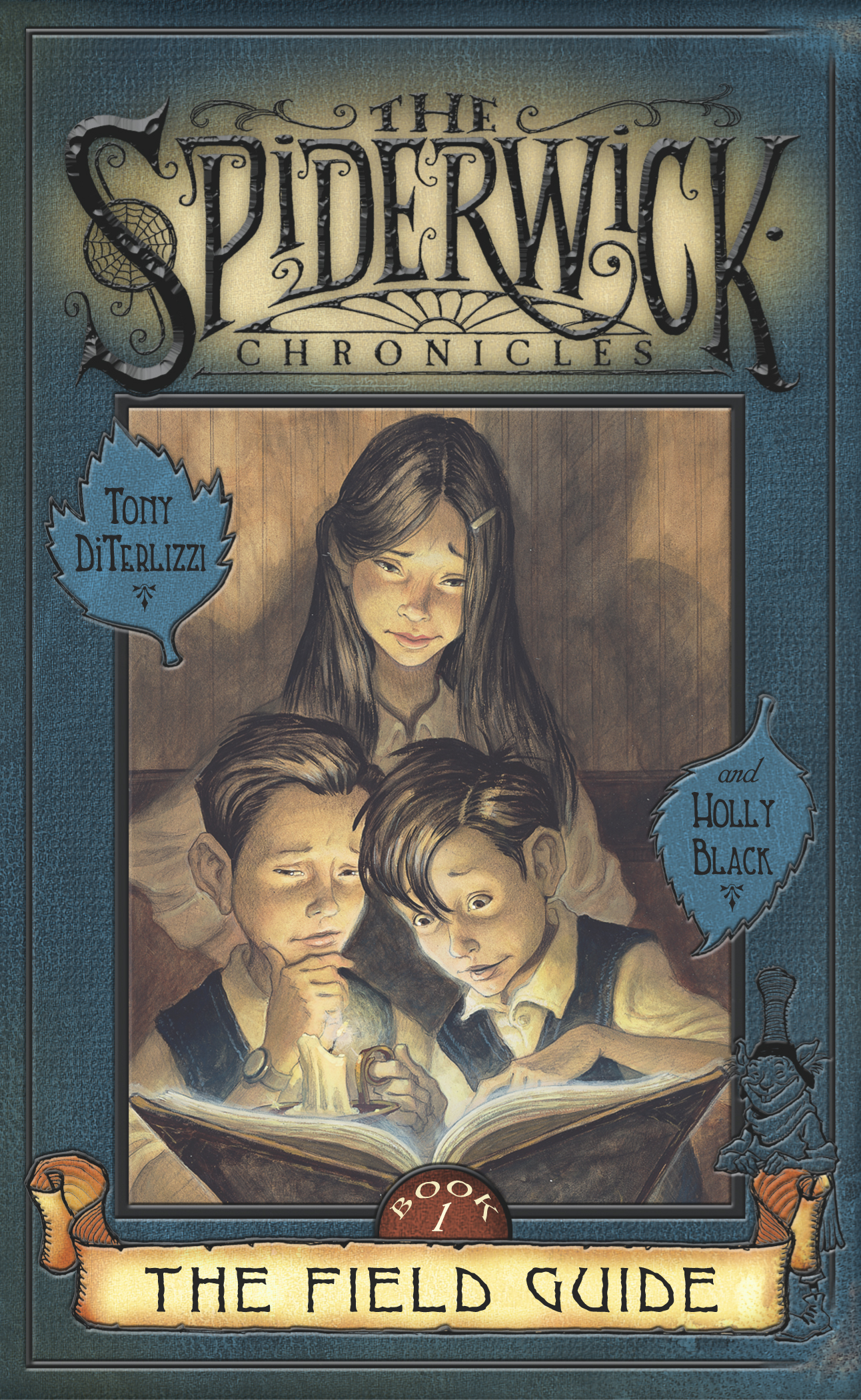 The Grace children discover the faerie world is closer than you think in this repackage of the first book in the #1 New York Times bestselling Spiderwick Chronicles.

After finding a mysterious, handmade field guide in the attic of the ramshackle old mansion they’ve just moved into, Jared; his twin brother, Simon; and their older sister, Mallory, discover that there’s a magical and maybe dangerous world existing parallel to our own—the world of faerie.

The Grace children want to share their story, but the faeries will do everything possible to stop them...

In honor of the tenth anniversary of the #1 New York Times bestselling Spiderwick Chronicles series, which has more than 12 million copies in print worldwide, this edition of The Field Guide features a larger trim size and an original cover with all-new art from Tony DiTerlizzi.

Chapter One: In Which the Grace Children Get Aquainted with Their New Home

If someone had asked Jared Grace what jobs his brother and sister would have when they grew up, he would have had no trouble replying. He would have said that his brother, Simon, would be either a veterinarian or a lion tamer. He would have said that his sister, Mallory, would either be an Olympic fencer or in jail for stabbing someone with a sword. But he couldn't say what job he would grow up to have. Not that anyone asked him. Not that anyone asked his opinion on anything at all.

The new house, for instance. Jared Grace looked up at it and squinted. Maybe it would look better blurry.

"It's a shack," Mallory said, getting out of the station wagon.

It wasn't really, though. It was more like a dozen shacks had been piled on top of one another. There were several chimneys, and the whole thing was topped off by a strip of iron fence sitting on the roof like a particularly garish hat.

"It's not so bad," their mother said, with a smile that looked only slightly forced. "It's Victorian."

Simon, Jared's identical twin, didn't look upset. He was probably thinking of all the animals he could have now. Actually, considering what he'd packed into their tiny bedroom in New York, Jared figured it would take a lot of rabbits and hedgehogs and whatever else was out here to satisfy Simon.

"Come on, Jared," Simon called. Jared realized that they had all crossed to the front steps and he was alone on the lawn, staring at the house.

The doors were a faded gray, worn with age. The only traces of paint were an indeterminate cream, stuck deep in crevices and around the hinges. A rusted ram's-head door knocker hung from a single, heavy nail at its center.

Their mother fit a jagged key into the lock, turned it, and shoved hard with her shoulder. The door opened into a dim hallway. The only window was halfway up the stairs, and its stained glass panes gave the walls an eerie, reddish glow.

The hallway led into a dining room. A long table with faded water spots was the only piece of furniture. The plaster ceiling was cracked in places and a chandelier hung from frayed wires.

"Why don't you three start bringing things in from the car?" their mother said.

"Yes, into here." Their mother put down her suitcase on the table, ignoring the eruption of dust. "If your great-aunt Lucinda hadn't let us stay, I don't know where we would have gone. We should be grateful."

None of them said anything. Try as he might, Jared didn't feel anything close to grateful. Ever since their dad moved out, everything had gone bad. He'd messed up at school, and the fading bruise over his left eye wouldn't let him forget it. But this place -- this place was the worst yet.

"Jared," his mother said as he turned to follow Simon out to unload the car.

His mother waited until the other two were down the hall before she spoke. "This is a chance to start over...for all of us. Okay?"

Jared nodded grudgingly. He didn't need her to say the rest of it -- that the only reason he hadn't gotten kicked out of school was because they were moving anyway. Another reason he was supposed to be grateful. Only he wasn't.

Outside, Mallory had stacked two suitcases on top of a steamer trunk. "I heard she's starving herself to death."

But Mallory shook her head. "I heard Mom on the phone. She was telling Uncle Terrence that Aunt Lucy thinks little men bring her food."

"What do you expect? She's in a nuthouse," Jared said.

Mallory went on like she hadn't heard him. "She told the doctors the food she got was better than anything they'd ever taste."

"You're making that up." Simon crawled into the backseat and opened one of the suitcases.

Mallory shrugged. "If she dies, this place is going to get inherited by someone, and we're going to have to move again."

"Maybe we can go back to the city," Jared said.

"Fat chance," said Simon. He took out a wad of tube socks. "Oh, no! Jeffrey and Lemondrop chewed their way loose!"

"Mom told you not to bring the mice," Mallory said. "She said you could have normal animals now."

"If I let them go, they'd get stuck in a glue trap or something," said Simon, turning a sock inside out, one finger sticking out a hole. "Besides, you brought all your fencing junk!"

"Shut up!" Jared took a step toward his sister.

"Just because you've got one black eye doesn't mean I can't give you another one." Mallory flipped her ponytail as she turned toward him. She shoved a heavy suitcase into his hands. "Go ahead and carry that if you're so tough."

Even though Jared knew he might be bigger and stronger than her someday -- when she wasn't thirteen and he wasn't nine -- it was hard to picture.

Jared managed to lug the suitcase inside the door before he dropped it. He figured he could drag it the rest of the way if he had to and no one would be the wiser. Alone in the hallway of the house, however, Jared no longer remembered how to get to the dining room. Two different hallways split off this one, winding deep into the middle of the house.

"Mom?" Although he'd meant to call out loudly, his voice sounded very soft, even to himself.

No answer. He took a tentative step and then another, until the creak of a board under his feet stopped him.

Just as he paused, something inside the wall rustled. He could hear it scrabbling upward, until the sound disappeared past the ceiling. His heart beat hard against his chest.

It's probably just a squirrel, he told himself. After all, the house looked like it was falling apart. Anything could be living inside; they'd be lucky if there wasn't a bear in the basement and birds in all the heating ducts. That was, if the place even had heat.

Then the door behind him opened and Simon came in, carrying mason jars with two bug-eyed gray mice in them. Mallory was right behind him, scowling.

"I heard something," Jared said. "In the wall."

"I don't know...." Jared didn't want to admit that for a moment he'd thought it was a ghost. "Probably a squirrel."

Simon looked at the wall with interest. Brocaded gold wallpaper hung limply, peeling and pocking in places. "You think so? In the house? I always wanted a squirrel."

No one seemed to think that something in the walls was anything to worry about, so Jared didn't say anything more about it. But as he carried the suitcase to the dining room, Jared couldn't help thinking about their tiny apartment in New York and their family before the divorce. He wished this was some kind of gimmicky vacation and not real life.

Holly Black is the author of bestselling contemporary fantasy books for kids and teens. Some of her titles include The Spiderwick Chronicles (with Tony DiTerlizzi), the Modern Faerie Tales series, the Curse Workers series, Doll Bones, The Coldest Girl in Coldtown, The Darkest Part of the Forest, the Magisterium series (with Cassandra Clare), and the Folk of the Air series. She has been a finalist for the Mythopoeic Award, a finalist for an Eisner Award, and the recipient of both an Andre Norton Award and a Newbery Honor. She lives in New England with her husband and son in a house with a secret door. Visit her at BlackHolly.com.

More books in this series: The Spiderwick Chronicles