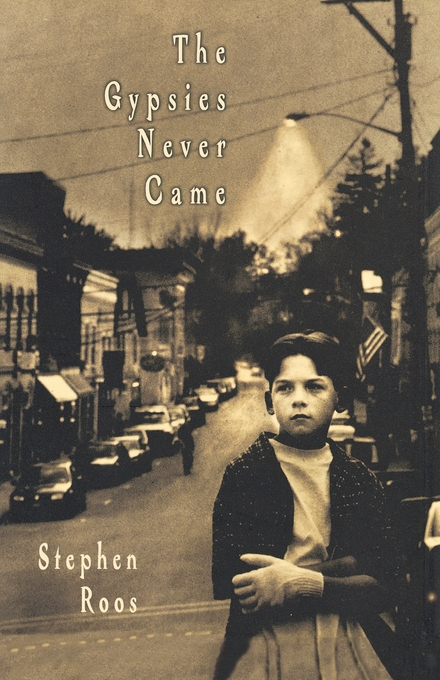 He holds his hand up to her face. "Celebrate this? I hate this. I hate this every day."

"You don't mean that," Lydie protests. "When the Gypsies come, you'll understand."

"Don't you get it, Lydie? They never come for gimps like me."

For a small town, Warsaw Junction has a lot of secrets. Who could guess that Augie Knapp, the kid who hides his deformed hand in a glove, has collected most of them...and hides them in an old suitcase?

No one even suspects Augie has a secret of his own until Lydie Rose Meisenheimer blows into town and signs up for sixth grade. Driving a broken-down convertible, wearing a black straw hat, and proclaiming herself Augie's new best friend, she turns his days into embarrassing nightmares.

But she also fills his nights with bright-shining visions of Gypsies -- Gypsies who could make Augie's dreams come true...if only he'd dare to dream a little harder.

The Gypsies Never Came is a bold departure for well-known author Stephen Roos. It's the story of a boy who wants to belong, a story that will make you laugh, break your heart, and change the way you look at the world.

It's early. The sun is barely clearing the eastern ridge.

Augie Knapp stands under the leafless oak in the Warnkes' backyard. There's still snow on the ground, but he's wearing an undershirt and cutoffs, like it's the middle of July.

On his left hand is a flesh-colored glove. The other hand is bare.

Like anyone could sleep through Augie's frogular croak. "Kyle! Come look!"

Finally, a light goes on upstairs.

The window flies open. A head leans out. "What the heck are you doing, Augie?"

"Freezing my buns off." Augie laughs. "What's it look like I'm doing?"

"Go back to bed and get some sleep, why don't you?" Kyle groans.

"Been there, done that," Augie shouts back.

Augie leaps onto the lattice. Grabbing the cross-slats with his right hand, he hoists himself up the side of the Warnkes' house. When he reaches the second story, he sees Kyle on the other side of the glass. "Open up!"

Kyle shakes his head. "No way!" he mouths.

"I'll wake everyone in the neighborhood!" Augie croaks as he raps on the glass with the gloved hand.

Slowly, Kyle opens the window again. "Give me a break, Augie. Let me get a little more sleep before school."

"You don't need more sleep. It's March twenty-first. It's the first day of spring, Kyle. We need to go up the ridge and find out where the stream begins."

"It's still winter," Kyle tells him. "The stream's still frozen, you jerk!"

Augie hears wood crack. He feels the lattice giving way under him. "Help me!" he cries.

Kyle reaches out and tries to grab him. Too late. The thin strips of wood are collapsing too fast.

Augie's arms flail at the sill, at the TV cable, at anything to break his fall. Something catches the end of Augie's arm. He crashes to the ground. The wind knocked out of him, Augie lies spread-eagled in the snow. As he looks up, he sees Kyle leaning over the windowsill, his face scrunched up with worry.

"But you're not dead or anything, are you?"

"Don't think so." He sees the glove. It's dangling on a nail. Suddenly his little smile evaporates. "My glove!" he cries out, sitting up suddenly.

As Augie gets to his feet, he instinctively tucks his left arm behind him, out of Kyle's sight. He makes a jump for the glove, then another. The nail's too high up.

He spots a snow shovel on the porch. Grabbing it with his good hand, he hurls the shovel into the air. It hits the side of the house, nudging the glove off the offending nail.

Kyle opens the front door. The legs of his red flannel pajamas tucked into his snow boots, he bolts onto the porch. "Let me help," he says.

"Got it," Augie says, picking the glove off the top of the snow.

"Come in, Augie. Get warm," Kyle says. "Maybe we can go up the ridge later, if you feel like it."

Shaking his head, Augie picks up the glove, examining it. It's all messed up. The fingers are ripped up, and the cotton stuffing's falling out. "I got to get home before my mom goes down to the beer company," he says anxiously. "She's going to be mad. I know it."

With his good hand he leans what's left of the lattice and Kyle's mom's wisteria against the house. Then he heads home.

Augie steps in from the cold. He breathes in the kitchen-warm smells of coffee mingling with burned toast.

Uncle Emil sits at the table. He's in his U.S. Postal Service uniform, drinking his coffee. "What were you doing outside in that getup?" he asks, shaking his head.

"It's spring," Augie says with a shrug. "Doesn't anyone around here ever look at a calendar?"

"You're sure one funny kid," Emil says, sighing, "and I don't mean funny ha-ha, either."

"That's what you get for calling Augie funny," she says as she dumps what's left of Emil's coffee in the sink.

Anyone can tell Uncle Emil and Honey are brother and sister. They have the same blond hair, same ruddy complexion. She's just a lot younger than he is. Wearing her Grateful Dead T-shirt and a denim skirt that barely reaches her knees, she could pass for a high school kid.

(Sometimes, when she's acting more like a kid than a mom, Augie calls her by her first name. She doesn't seem to mind, as long as no one's around.)

"You hurry, Augie," his mom says, pointing to the orange juice and cereal waiting for him on the table. "You don't want to be late for school." She closes the dishwasher door and turns the dial. The dishwasher thumps heavily into action.

But the dishwasher's too loud. He knows she can't hear him. "Mom?" he asks, louder this time. Augie dangles the glove in the air. This time he catches her eye.

"A nail?" she asks suspiciously.

"Don't blame me if people leave nails where they shouldn't," Augie says.

"When are you going to that clinic over in Greenburgh?" Uncle Emil asks.

"That place is for amputees," Augie protests. "I already told you."

"They can still fit you with a hook, Augie," Uncle Emil says. "I checked. Free of charge, too. Government pays the whole thing."

Augie feels the blood rushing to his face. "I'm not like those people."

"You don't tell me what to do," Augie protests. "You're not my father."

Emil grabs his coat from the hook by the back door. "If you got yourself a hook, you wouldn't need that silly glove," he says. "That's all I'm saying."

Once Emil's gone, Honey takes a box from the cupboard. Inside are half a dozen left-hand gloves like the one Augie just ruined, plus a bag of cotton balls and another bag full of wire pieces.

"Do it later," Augie tells her. "You don't have to be late for the beer company."

"You plan to keep your hand in your pocket all day?" she asks as she makes up his new glove.

He looks at the little ball of pink flesh at the end of his wrist. On it are little bumps of cartilage where the fingers were supposed to grow.

"Just in the morning," Augie says. "At lunch, I'll take it out and watch the kids barf all over the place."

"Funny ha-ha or funny the other way?" she asks.

Augie crosses his eyes and lets a little spit drool down his chin. "Can't someone be both?" he asks, putting on the new glove.

Stephen Roos's most recent novel is The Gypsies Never Came, which School Library Journal, in a starred review, said "deserves a wide and eager audience." Mr. Roos is the author of nearly two dozen books for young people, including Twelve-Year-Old Vows Revenge, Confessions of a Wayward Preppie, and You'll Miss Me When I'm Gone.

Of Recycling George, he writes: "Life for my mom and dad was a movable feast. From fifth grade to high school I went to nine different schools, so I know about George's sense of rootlessness, his yearning for a place to call home. George, I think, makes the best of it. Definitely, he's got a lot of guts. He may not be a standard-issue, board-certified role model, but when I grow up, I'd like to be him."