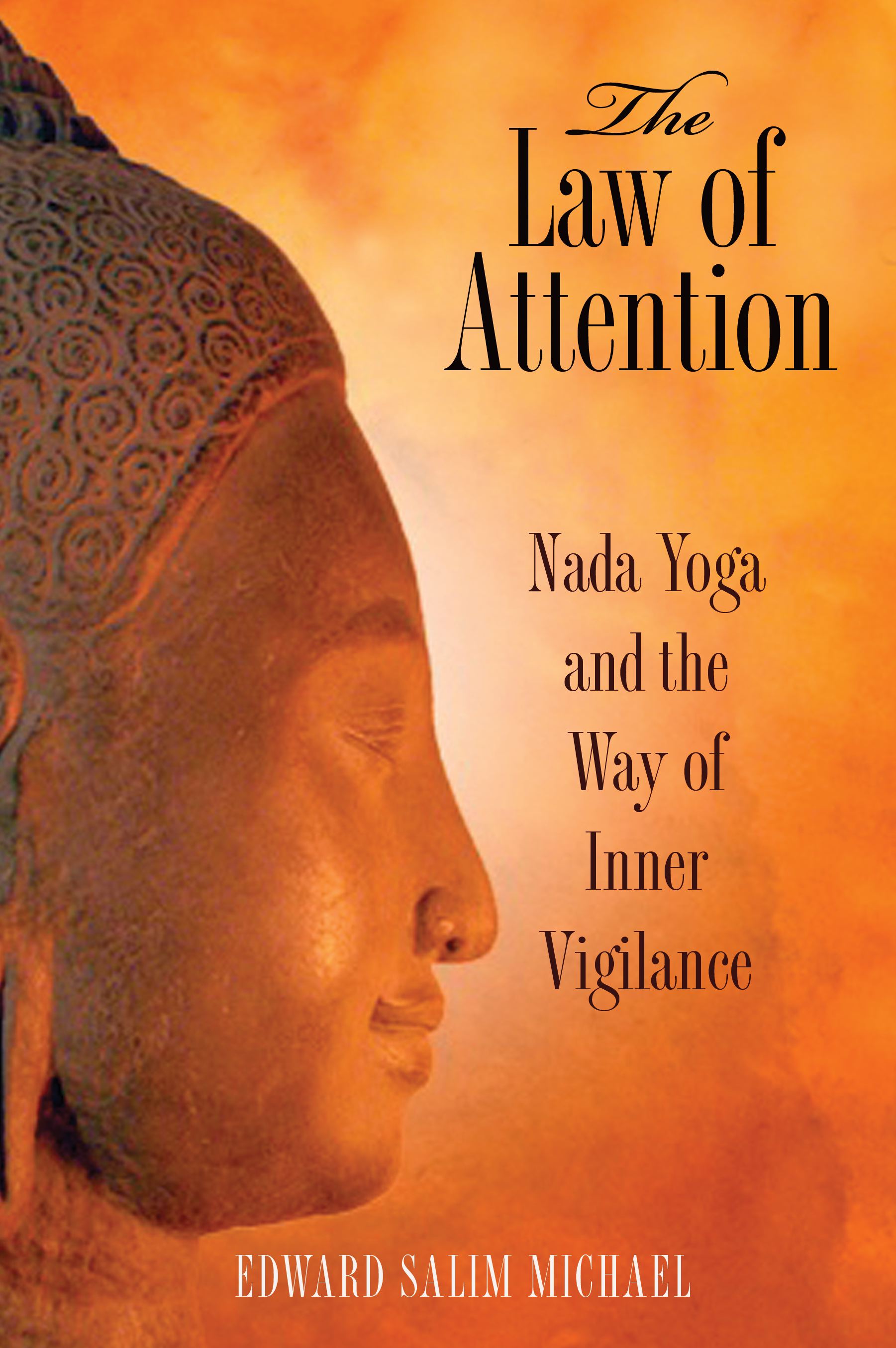 The Law of Attention

Nada Yoga and the Way of Inner Vigilance

• Provides techniques for listening to the primordial sound within

This book--at once simple and powerful--stands as a monument to the lifelong spiritual struggles of Edward Salim Michael, struggles that he heroically surmounted on his path to enlightenment. Due to the circumstances of his birth, Michael had no education, no mother tongue, and no book learning when he was drafted at the age of 19 into the British Royal Air Force during World War II. After learning to read and write he became an accomplished classical composer in France. In 1949, after seeing a statue of a Buddha for the first time, he experienced a powerful awakening of his innate Buddha Nature, which inspired him to begin a sustained and extremely disciplined meditation practice. Michael abandoned his career as a composer and went to India, the home of his maternal grandmother, where he lived for seven years fully focused on his spiritual awakening.

Michael’s spiritual teachings reveal techniques of yoga and meditation that can open the door to one’s higher nature and to directly experience the after-death state. Nada yoga (meditation on the inner sound) is one of the core techniques for this realization. There is a vast luminous consciousness already within us, but it is obscured by the clouds of our incessant thoughts. With sincerity, moral integrity, and inner vigilance, which, when embodied, implies that we have internalized the basic tenets of the law of attention, we can move beyond the promptings of our lower nature and break through the clouds of our ordinary mind to realize our own divine nature. Emphasizing inner attention and an awareness of attitude, Michael’s practices can help aspirants make direct contact with the divine source each of us unknowingly carries deep within.

By its very unusual nature, the way of yoga (or anyreal spiritual work) cannot be easy, and is, in general, beyond the capacity of the ordinary person whose interests and main source of pleasure in life are principally centered in the outside physical world. The profound sincerity, unrelenting efforts, and tenacious perseverance that are demanded of an aspirant can be measured only by the spectacular results conferred on such spiritual struggles.

In this domain more than in any other, whether it be artistic or not, a person can rise to the sublime heights of his being only insofar as he is prepared to give himself up--renouncing his inner dreams, ambitions, and the countless enticing pleasures the outer world offers him--to the pursuit of his spiritual quest, the fruit of which he cannot tangibly see nor even conceive at first.

It sometimes happens in life that very great creative artists have in them this exceptional inner force, unusual sincerity, and the capacity to sacrifice themselves to such an astounding degree as to accept the direst hardships and suffering to achieve their artistic creations. This may partly explain why the masterpieces of certain composers can impart such profound and sublime feelings that no words ever could.

When an aspirant has started this all-important spiritual work, it is vital for him to learn to distinguish clearly between the short moments when he is truly aware of himself during his spiritual endeavors, and the long periods when he only thinks he is aware. In the beginning, it is easy for someone to delude himself into the belief that he is making genuine efforts of presence while working at his Hatha-Yoga asanas (yoga postures), pranayama (special breathing), or any other spiritual exercise when, in fact, he is either lost in his usual state of absence and reveries, or--which is much worse--absorbed in fantasies about himself and enlightenment, projecting on the latter ideas that have no relation to reality, thus closing the door on any understanding of the real nature of his True Being.

The difficulty of breaking with their customary state of being and allowing something else in them to become apparent to their inner vision is truly immense for most people. It can in general be said that one never possesses sufficient strength nor the will to go beyond one’s ordinary self and become fully engaged in one’s spiritual work with the whole of oneself as one should. One has become so accustomed throughout one’s life to doing everything in a half-hearted or uninterested manner, most of the time lost in one’s habitual state of oblivion, that one now accepts this condition in oneself as normal, without feeling the need to question it any further.

The kind of presence needed for this work demands such profound inner sincerity from an aspirant as does not generally exist in the normal course of life. It is difficult for him to understand this because, when he first embarks on such a journey, he takes himself with him as he is, with all his baggage of complexes, desires, ignorance, and weaknesses. To be present to oneself with the utmost of one’s capacity when doing a Hatha-Yoga asana or during meditation has a very special taste about it that is unmistakable. One must really realize, from the depths of oneself, that this kind of effort, in its most intense and unalloyed state, can be maintained only for very short moments at first, but it will have an unforgettable savor about it, and will leave a deep trace in one’s being afterward.

Sincerity begins for the aspirant at the very instant when he sees his insincerity. The problem is that, generally, he will either refuse to face this unpleasant aspect of himself altogether, and even angrily deny it if it is brought to his attention, or he may see it for only a short instant and quickly brush it aside, hiding it behind all kinds of conscious or unconscious justifications. The very fact that a seeker succeeds in seeing himself as he is, feels remorse, and begins to suffer from it will of itself start creating in him the necessary conditions to permit the birth of a new way of being and pave the way to a true spiritual awakening.

It needs a particular kind of strength and courage to look unflinchingly at one’s own insincerity, a strength and courage that can only arise and become actual when inspired by the acute yearning for one’s emancipation. To look courageously at his insincerity will arouse in the aspirant a profound pain and sorrow--indispensable to make him wish to alter his way of being. And, paradoxically, the strength to become more sincere will come as much from the grief that arises from seeing this want of sincerity in him as from his longing for sincerity itself.

The sincere inner attitude and attentiveness with which a seeker performs his spiritual exercises can be the start of learning what “dying to oneself ” really means. This will in time give rise to a greater purity of being, which will inevitably have an effect on all his future spiritual strivings and meditations as well as in his relationship with other people.

By shielding others from his own insincerity, the aspirant will also safeguard the inner light he may--through Grace and his efforts--have found in himself against getting again through wrong desires, harmful actions, or a false way of being. The more sincere a seeker is, the more sincere he will be able to be. As sincerity is put into practice it grows and multiplies, like a grain of wheat sown in the soil, which, when nourished and protected, gives birth to innumerable other seeds.

Edward Salim Michael (1921-2006) began transmitting the fruits of his inner experiences and mystical understandings to his pupils in 1974. In addition to The Law of Attention, first published in 1983, he has written 7 other books in French.

“The Law of Attention is a remarkable book filled with clear guidance that presents a strong call for the total dedication of one’s life in the quest of supreme enlightenment. With Edward Salim Michael’s uncompromising emphasis on integrity and effort this is not a book for the fainthearted or dilettante, but I would recommend all serious aspirants to read this book again and again both for its inspiration and its precise instructions. Although not a specifically Buddhist text, the path mapped out and advice so meticulously given render it a suitable companion and guide for any spiritual traveler.”

“This fine book offers, without doubt, the clearest and most comprehensive description of ‘Nada Yoga’ (meditation on the inner sound) that is available in the English language. This is a practice that is known in Vedic, Buddhist, and other traditions to be a powerful and liberating spiritual discipline and is also one that I have used for more than 25 years, to great benefit.”

– Ajahn Amaro, co-abbot of Abhayagiri Monastery in the Forest lineage of the Theravada Buddhist tradit

“Edward Salim Michael’s teaching goes straight to the heart, making us realize the commitment, energy, and love it takes to realize the truth at the deepest level. This book is a spiritual friend and guide for all seekers of Truth.”

“The Law of Attention is a remarkable guide for all those who wish to find the treasure that lies within each of us. Edward Salim Michael has given us a guide to the path that leads within and words of encouraging instruction when the way is difficult. His words reflect a life dedicated to spiritual practice.”

The Law of Attention

Nada Yoga and the Way of Inner Vigilance