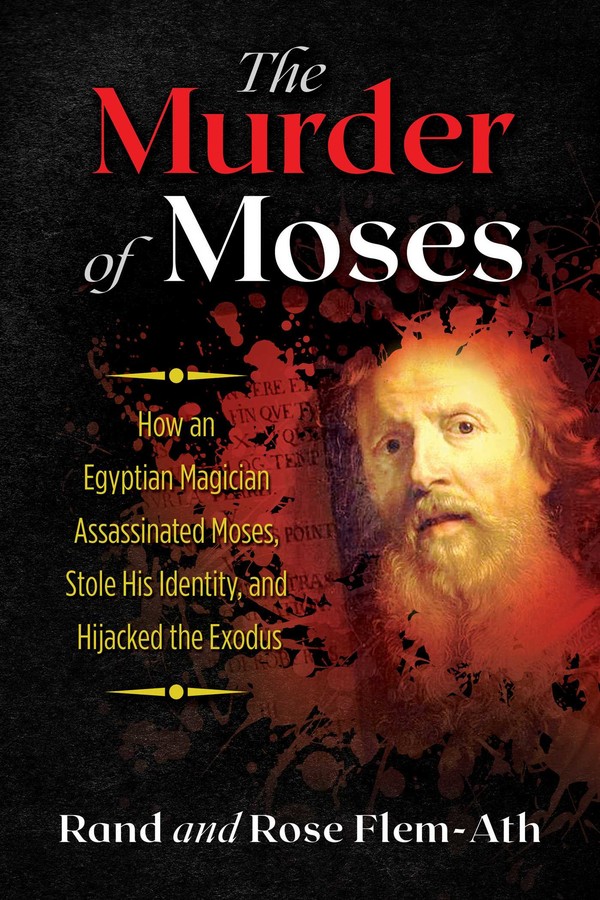 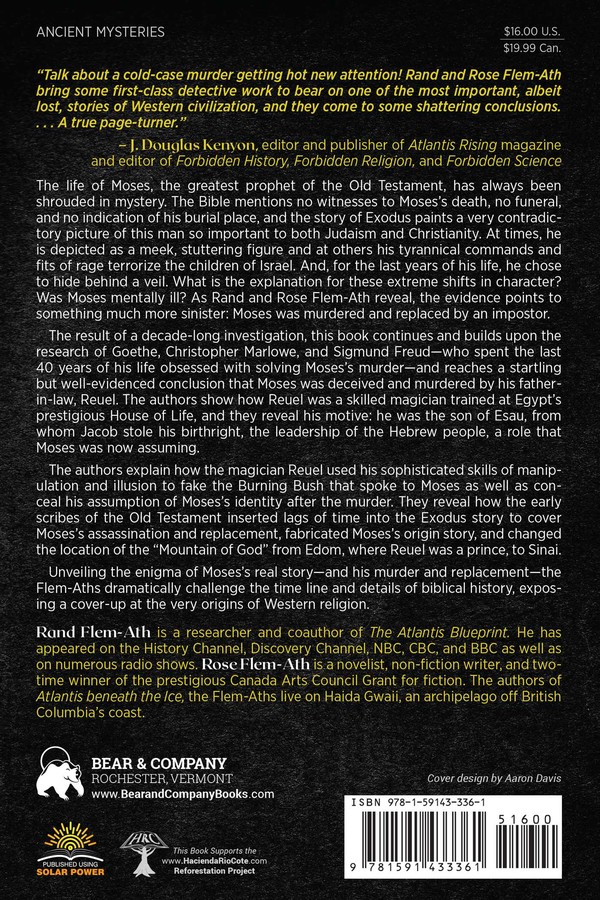 The Murder of Moses

How an Egyptian Magician Assassinated Moses, Stole His Identity, and Hijacked the Exodus

An investigation of how Moses was deceived and murdered by his father-in-law, Reuel

• Builds upon the Moses research of Goethe, Christopher Marlowe, and Sigmund Freud--who spent the last 40 years of his life obsessed with solving Moses’ murder

The life of Moses, the greatest prophet of the Old Testament, has always been shrouded in mystery. The Bible mentions no witnesses to Moses’ death, no funeral, and no indication of his burial place, and the story of Exodus paints a very contradictory picture of this man so important to both Judaism and Christianity. At times, he is depicted as a meek, stuttering figure and at others his tyrannical commands and fits of rage terrorize the children of Israel. And, for the last years of his life, he chose to hide behind a veil. What is the explanation for these extreme shifts in character? Was Moses mentally ill? As Rand and Rose Flem-Ath reveal, the evidence points to something much more sinister: Moses was murdered and replaced by an impostor.

The result of a decade-long investigation, this book continues and builds upon the research of Goethe, Christopher Marlowe, and Sigmund Freud--who spent the last 40 years of his life obsessed with solving Moses’ murder--and reaches a startling but well-evidenced conclusion that Moses was deceived and murdered by his father-in-law, Reuel. The authors show how Reuel was a skilled magician trained at Egypt’s prestigious House of Life and they reveal his motive: He was the son of Esau, from whom Jacob stole his birthright, the leadership of the Hebrew people, a role that Moses was now assuming.

The authors explain how the magician Reuel used his sophisticated skills of manipulation and illusion to fake the Burning Bush that spoke to Moses as well as conceal his assumption of Moses’ identity after the murder. They reveal how the early scribes of the Old Testament inserted lags of time into the Exodus story to cover Moses’ assassination and replacement, fabricated Moses’ origin story, and changed the location of the “Mountain of God” from Edom, where Reuel was a prince, to Sinai.

Unveiling the enigma of Moses’ real story--and his murder and replacement--the Flem-Aths dramatically challenge the time line and details of biblical history, exposing a cover-up at the very origins of Western religion.

The name Moses is so familiar that we’ve forgotten that the word held an unfamiliar and foreign ring to the ancient Hebrews. In the Egyptian language Moses meant son of. It was always, without exception, added to another name--usually that of a god such as Thoth or Ra. Although easily understanding a name like Ra-Moses, which would translate as son of the god Ra, the single name Moses would have been puzzling and would naturally elicit the question, “son of whom?” To Freud the name strongly indicated that Moses’ parents were Egyptian and not Hebrew. In Moses and Monotheism he wrote, “It might have been expected that one of the many authors who recognized Moses to be an Egyptian name would have drawn the conclusion, or at least considered the possibility, that the bearer of an Egyptian name was himself an Egyptian. In modern times we have no misgivings in drawing such conclusions . . . What hindered them from doing so can only be guessed at. Perhaps the awe of Biblical tradition was insuperable. Perhaps it seemed monstrous to imagine that the man Moses could have been anything other than a Hebrew.”

The second chapter of Exodus reveals that Moses was born in Egypt during the reign of a tyrannical Pharaoh who planned to kill all first born Hebrew sons. Moses’ frantic mother managed to hide him for three months.

Freud claimed that Moses’ true heritage had been deliberately suppressed by Jewish editors of the Bible who couldn’t stomach the idea of such an authoritative prophet not being born to a Jewish mother. He believed that exiled Jewish scholars had invented a more palatable legend during their captivity in Babylon where they had most certainly read the legend of Sargon and were inspired to adopt it for their own propaganda purposes. By a simple cut-and-paste job they conferred upon their hero a fully Hebrew birthright more fitting of the great prophet. In a second article for Imago, Freud took his idea much further, arguing not only that Moses was a full-blooded Egyptian but also, shockingly, that he was a follower of the Eighteenth Dynasty Pharaoh, Akhenaten (1375 BC-1358 BC) who introduced the world’s first religion based upon the idea of a single God.

In 1819, Johann Goethe wrote “Israel in the Desert” partly as an attempt to show how later editors of the Bible had tampered with the story of Moses. At the time, many biblical scholars were busy trying to disentangle the various strands that composed the first five books of the Old Testament attributed to Moses and named The Torah (the Law) by the Jews. Goethe was disturbed by what he saw as the deliberate insertion of artificial laws into the text that only impeded the progress of the stories. He believed that the narrative of the heroic adventure had been bogged down by unnecessary, and unwelcome, depictions of religious ritual.30

Goethe’s aesthetic convinced him that misleading words had been added to the scriptures. Like an art historian peeling away the layers of paint covering a lost masterpiece he revealed hidden seams and overlapping pigments that implied that there were different authors, some of whom were obsessed with religious ceremony. According to Goethe these late, bogus and unwelcome additions spoiled the natural flow of the stories.

The same meddlesome writers had exaggerated critical timescales. Goethe considered the idea that a great prophet had wandered the desert for forty years with thousands of people in tow to be absurd. It called into question Moses’ fitness as a commander and painted him in a ridiculous light. Goethe concluded that the only explanation must be that the forty years was symbolic; noting other instances in the Bible where the number forty was used symbolically. Remove the corruption of the text, especially the illegitimate timescale, Goethe reasoned, and Moses’ dignity would be restored, revealing the prophet of God as more of a hero and less of a buffoon.

When there are no witnesses to a murder, detectives are trained to discover the guilty party by asking who had the “motive, means and opportunity” to commit the crime. There is only one character in the Moses story who fits this bill. The insights of Marlowe, Goethe, and Freud all provide clues to his identity and point to evidence of his ruthlessness.

Marlowe gave us the ‘means,’ by which the murder was accomplished. He believed that Moses was an illusionist whose acts thrilled and baffled the children of Israel because they were naive in the ways of an Egyptian-trained Magician. These acts of illusion concealed the murder of the prophet and allowed an impostor to step into his place. Goethe believed that the story of Moses had been tampered with by scribes with a powerful agenda. Their late editing of the original spoken stories distorted the truth by inserting artificially long periods of time into the text. Removing these exaggerated periods of time reveals what was concealed. We take Goethe’s argument further. Once we remove the artificial timescales that were shoe-horned into the text by the manipulative editors it becomes apparent that our prime suspect had the perfect opportunity to murder Moses.

Freud insisted that Moses was an Egyptian. Denying the Jews a genetic link to the greatest of their prophets was something he did with great reluctance, especially since his people were facing the Nazis in 1939, the year his book was released. The idea that there were two Moses was something many of the faithful found deeply disturbing.

Unlike Freud we don’t believe that the death of the ‘first’ Moses resulted from a spontaneous murder. One man was powerfully motivated, possessed the skills of a magician, and had the opportunity to murder Moses. Our suspect is Moses’ father-in-law, Reuel, the man Goethe held in such esteem.

Rand Flem-Ath is a librarian and coauthor of The Atlantis Blueprint. He has appeared on the History Channel, the Discovery Channel, NBC, CBC, and the BBC as well as on numerous radio shows. He lives on Vancouver Island in British Columbia.

Rose Flem-Ath is a novelist, non-fiction writer, and two-time winner of the prestigious Canada Arts Council Grant for fiction. She lives on Vancouver Island in British Columbia.

“Talk about a cold-case murder getting hot new attention! Rand and Rose Flem-Ath bring some first-class detective work to bear on one of the most important, albeit lost, stories of Western civilization, and they come to some shattering conclusions. Long ignored by mainstream academic scholarship, the extraordinary views of the father of psychoanalysis, Sigmund Freud, on the identity and fate of the Hebrew lawgiver Moses finally get some richly deserved attention. In a dramatic tale of wartime danger and personal hardship suffered by Freud and his family, the Flem-Aths offer a rare glimpse into his little-known quest to track down the details of a sensational and controversial hypothesis that he knew might get him cast out of his own community, if not killed. The result is riveting and the book is a true page-turner.”

“Scouring the highways and byways of our ancient past, seeking clues to the true story of the biblical Moses, Rand and Rose Flem-Ath have come to some radical conclusions that are bound to cause controversy. If their conclusions are right, then a significant pieceof what we thought we knew of our religious heritage will almost certainly have to be revisited. A tour de force of original thinking.”

“This culmination of many years of exhaustive, in-depth research reaches fascinating conclusions that are far more than mere speculation. The Flem-Aths survey perennial Jewish folklore as well as a myriad of previous investigators’ findings in order to demonstrate how Old Testament scribes altered those biblical texts to favor the biases of the priesthood. I learned much more sensible history from this intriguing work than any Sunday school class would ever be permitted to teach.”

The Murder of Moses

How an Egyptian Magician Assassinated Moses, Stole His Identity, and Hijacked the Exodus