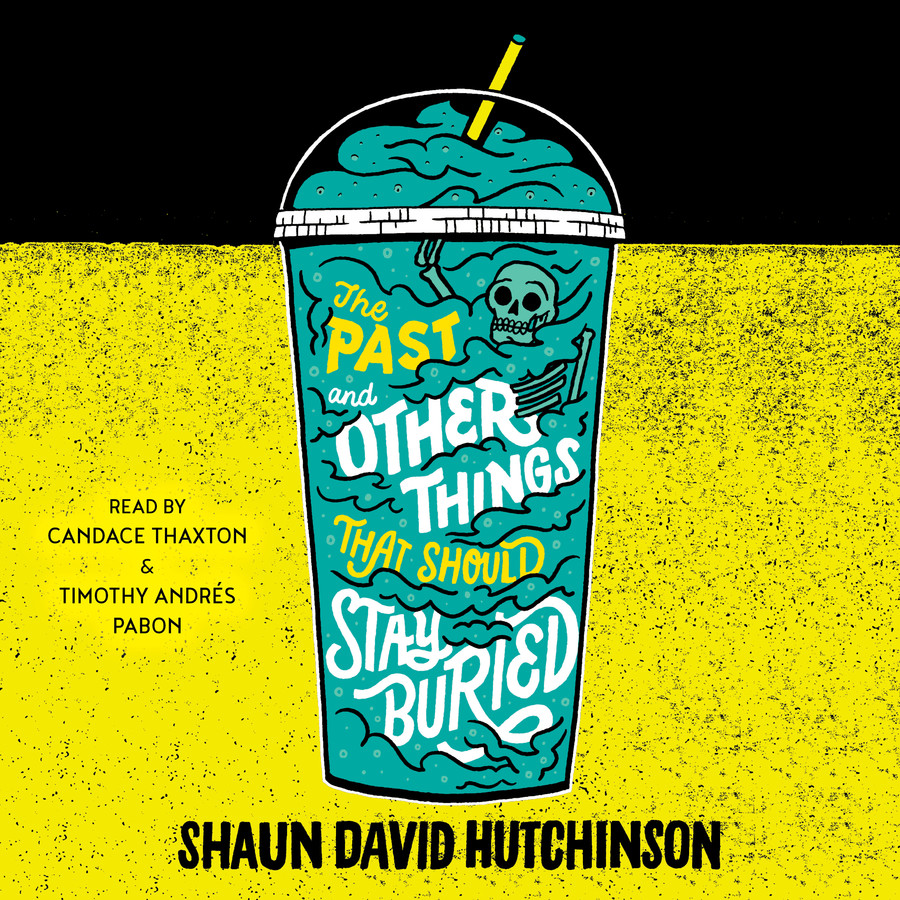 “A fearless and brutal look at friendships...you will laugh, rage, and mourn its loss when it’s over.” —Justina Ireland, New York Times bestselling author of Dread Nation

Six Feet Under meets Pushing Daisies in this quirky, heartfelt story about two teens who are granted extra time to resolve what was left unfinished after one of them suddenly dies.

Dino doesn’t mind spending time with the dead. His parents own a funeral home, and death is literally the family business. He’s just not used to them talking back. Until Dino’s ex-best friend July dies suddenly—and then comes back to life. Except not exactly. Somehow July is not quite alive, and not quite dead.

As Dino and July attempt to figure out what’s happening, they must also confront why and how their friendship ended so badly, and what they have left to understand about themselves, each other, and all those grand mysteries of life.

Critically acclaimed author Shaun Hutchinson delivers another wholly unique novel blending the real and surreal while reminding all of us what it is to love someone through and around our faults.

Seventeen-year-olds Dino DeLuca and July Cooper have been ex–best friends for a year. Prior to that, they barely have any memories that the other isn’t a part of. So when July suddenly dies of an aneurysm, Dino is left with a multitude of mixed feelings. Fortunately—or unfortunately—Dino and July have another chance to work out their complicated relationship when July sits up on the metal table in the DeLuca and Son’s mortuary.

1. List the reasons Dino both hates and misses July. Why do you think it’s possible to have conflicting feelings toward someone who knows you best? Have you experienced complicated friendships or relationships like Dino and July? What advice would you give Dino?

2. What do Dino’s parents expect of him? Why do you think Dino has continued to work in the morgue even though he’s not passionate about it? Why do his parents refuse to believe him when he tells them he doesn’t want to follow in their footsteps? What do your parents expect of you? How are parental expectations harmful? How are they beneficial?

3. In Dee’s bedroom, her clothes are sorted by type and color. Rafi’s room has dirty clothes, comic books, computer parts, and other objects littering the floor. What does someone’s room say about them? What does your room say about you? Do you think your room reflects who you are? Where do you feel most like yourself? Are there both people and places that make you feel that way?

4. Dino considers his older sibling Dee to be perfect. July has a younger sister who “barely registers” because her older sister feels larger than life. Think about the people in your life: classmates, siblings, friends, relatives, members of your community. How do you view them? Do you think there are things they haven’t shared with you? Do you think you ever categorize or stereotype them, or make assumptions? How could you get to know them better? Do you think people ever misunderstand you? How can you be better about making your views, preferences, and personality known?

5. What physical differences does July experience because her body is a corpse? How does her physical decline affect the plot? Do you think it affects Dino and July’s relationship?

7. Compare and contrast Dino and July. After reviewing your list, why do you think they were best friends? Do you think they had more of a positive or a negative influence on each other? What qualities do you value in a friend? What signs might point to a toxic friendship? Do you consider the length of a friendship to be a big factor in choosing whether or not to remain close? Have your friendships changed growing up? Are there any friendships you wish you had a second chance to fix? Explain your answer.

8. In what ways has Dino changed since he met Rafi? How does Rafi encourage Dino in ways that July may have neglected? Why is Dino so conflicted about having the two meet? What realization does he come to when he considers this?

9. How might the plot of this story change if it had been written in the 1990s before smart phones?

10. Describe the situation that ends with Kandis saying, “Then those jokes don’t belong to you.” Why do you think Rafi’s friends are so bothered by July’s attempt at humor? Why do you think July thought it was okay to make those jokes? Do you think someone laughing along with you automatically means they appreciate your joke? Why might it be difficult for someone to speak up about what they find offensive, especially in the context of a larger group? Do you think it’s your responsibility to be sensitive to other identities and cultures?

11. What does Rafi try to show Dino about family and belonging while they’re cleaning the beach with other kids from the community center? Think about interactions you see between Rafi and his friends throughout the novel; how do you know they respect and understand each other? Compare and contrast relationships between Rafi and his friends with Dino and July’s relationship. What might Dino and July be able to learn from Rafi’s group? What does Rafi try to make Dino see about himself?

12. What does July learn when she’s pretending to be Roxy? Why can putting on a persona help people deal with issues or situations? What are some of the problems that can arise from pretending to be someone else? Do you think July knows who she is with Dino and without Dino? Do you think she’s as comfortable with herself and her decisions as she first appears to be?

13. Why are Dino and July no longer friends when the book begins? By the end of the book, whose fault do you think that is? Do you think Dino and July know each other as well as they think they do? Why can it become problematic to make assumptions for someone you know well, or to only let one person get close to you? What kind of sacrifices would you make for your friends? Do you feel you can be honest with them? Do you think best friends should always be truthful?

14. Explain how Dino and July reach a new understanding of one another. Why do you think they struggled so much to communicate when July was alive? Do you think knowing July might not have much time left contributed to their desire for reconciliation? Do you think both Dino and July are at peace with how they left things?

15. What is your definition of romantic love? How does Rafi know he is in love with Dino? Why does Dee believe that she is in love with Theo? Why can it be difficult to express how we feel about one another? What are the similarities and differences between romantic love and the love of a close friend? Do you believe you need friendship to build a strong relationship? Why can it be difficult when a close friend begins a relationship? Think about the dynamic between July and Dino, and Dino’s hesitation with Rafi.

17. Do you agree with the title? Should the past stay buried? Explain your answer. How might Dino’s life have progressed if he hadn’t had the chance to repair things with July?

1. One of the repeating images in this novel is boxes. As a class, discuss the following quotes and situations from the story:

“But once we stuff someone into a box, what’s on the inside no longer matters.”

“We box reality up and hide it in some distant corner of our minds like a bomb on a timer we’ll be forced to confront one way or another.”

Then write an essay about boxes you see in your life or community, and how they make you feel. Do you ever unintentionally or intentionally box others in? How can you prevent or avoid doing this in the future? Reflect on the class discussion: Did anything anyone said make you view yourself or others differently? Did the conversation change the way you feel about any of the events in the novel?

2. July chooses to write e-mails for Dino to send to her family. Write a note to someone in your life whom you’ve wronged or whom you haven’t been completely honest with, and explain how you feel or what you’re sorry for. What can you do to open a conversation? Make sure you include questions for them, and ideas you can both reflect on. How long did it take you to write the letter? How did it make you feel? Why can it be easier to write to someone instead of speak face-to-face? Why do you think July chose to leave her family notes instead of talking to them one last time?

3. Make a list of ten activities that make the world a better place, like cleaning up a beach or starting a community center. Then make a list of ten purely fun activities, like going to Disneyland. Out of the twenty items on your lists, circle the top five activities that you would choose to do. What do your choices say about you? Do you think July’s and Dino’s lists would look different at the beginning of the book versus the end? What kind of perspective did July’s death give them on life? Does thinking about this change any of your choices?

4. There are many funny, intense, and strange conversations in the novel. Choose one of your favorite scenes and find a friend or two to perform a readers’ theatre version in front of your classmates. Then, as a class, choose one scene for multiple groups to perform. How do different inflections change your interpretation of the book, or your appreciation for the characters?

Guide inspired by Shari Conradson, an English, drama, and history teacher in California. 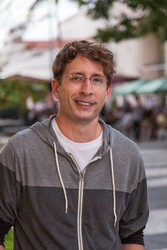 Shaun David Hutchinson is the author of numerous books for young adults, including The Past and Other Things That Should Stay Buried, The Apocalypse of Elena Mendoza, At the Edge of the Universe, and We Are the Ants. He also edited the anthologies Violent Ends and Feral Youth and wrote the memoir Brave Face, which chronicles his struggles with depression and coming out during his teenage years. He lives in Seattle, where he enjoys drinking coffee, yelling at the TV, and eating cake. Visit him at ShaunDavidHutchinson.com or on Twitter @ShaunieDarko.