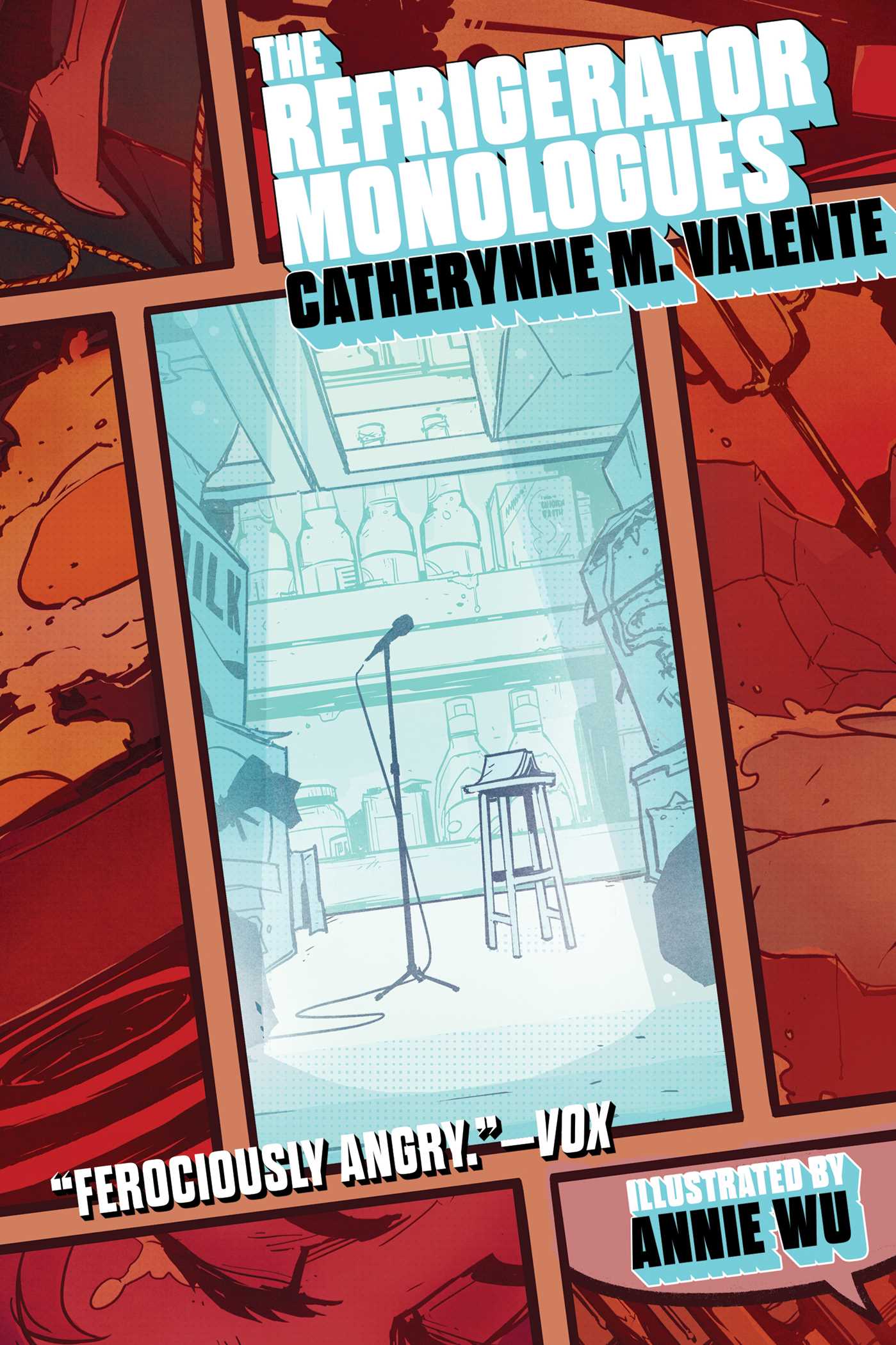 By Catherynne M. Valente
Illustrated by Annie Wu
PRICE MAY VARY BY RETAILER

From the New York Times bestselling author Catherynne Valente comes a ferocious riff on the women in superhero comics.

The Refrigerator Monologues is a collection of linked stories from the points of view of the wives and girlfriends of superheroes, female heroes, and anyone who’s ever been “refrigerated”: comic book women who are killed, raped, brainwashed, driven mad, disabled, or had their powers taken so that a male superhero’s storyline will progress.

In an entirely new and original superhero universe, Valente subversively explores these ideas and themes in the superhero genre, treating them with the same love, gravity, and humor as her fairy tales. After all, superheroes are our new fairy tales and these six women have their own stories to share.

It’s been a while now. I’m comfortable with the word. You wouldn’t believe how comfortable the dead can get. We don’t tiptoe.

Dead. Dead. Dead. Flying Ace of the Corpse Corps. Stepping the light Deathtastic. I don’t actually know what a doornail is, but we have a lot in common. Dying was the biggest thing that ever happened to me. I’m famous for it. If you know the name Paige Embry, you know that Paige Embry died. She died at night. She died stupidly. She died for no reason. She fell off a bridge like a suicide leap and nobody caught her. She dropped into the water, her spine snapped, and the last things she probably saw was those astonishing lights in the sky, the lights of Doctor Nocturne’s infernal machine igniting every piece of metal in the city, turning skyscrapers into liquid purple fire while Kid Mercury punched the bad guy over and over again, maybe because he was grieving already, maybe because he loved fighting more than girls and it was his biggest fight yet, maybe because that’s what the script of his life told him to do, maybe because he couldn’t stop. Paige Embry died watching her boyfriend save New York City. When the fires went out in Manhattan, they went out in her eyes, too.

It’s nice to be famous for something, I guess.

And the thing about me is, I’m not coming back. Lots of people do, you know. Deadtown has pretty shitty border control. If you know somebody on the outside, somebody who knows a guy, a priest or a wizard or a screenwriter or a guy whose superpower shtick gets really dark sometimes or a scientist with a totally neat revivification ray who just can’t seem to get federal funding, you can go home again.

But we go steady, Death and me. Nobody can tear us apart.

Not everybody wants to go back. Life’s okay in Deadtown. The early bird special lasts all day and the gas is free. There’s no fiery rings of artisanal punishment down here. Just neighborhoods. Blackstones. Bodegas. Walk-up apartments with infinite floors. The subways run on time. Yeah, sure, there’s skulls and femurs and gargoyles all over the place and the architects never met a shade of black they didn’t like, but hey—good design is all about a unified aesthetic. You get used to it. It starts to feel like home. And the gargoyles are really nice guys. The one living on my balcony is called Brian. He has three heads and he’s super into slam poetry. Deadtown is like anyplace else. It’s scary at first, but you get into a rhythm. Find a favorite park. Put a couple of pictures up on your wall. Pretty soon, you can’t imagine living anywhere else.

Not everyone adjusts. I’ve seen girls run down the main drag toward the EXIT sign with smiles on their faces that would break you in half. Then again, I’ve seen others dragged back to the land of the living, screaming and sobbing and clawing through the dirt till their fingernails snap off and their mouths fill up with snot.

But not me. No way. No how. If there’s a constant in the universe, it’s that Paige Embry is dead. I am a permanent error page. 404: Girl Not Found. Oh, sure, I know a guy on the outside. A pretty damn powerful guy. A guy with the speed of a maglev train, the brainpower of a supercomputer, and the strength of a half-dozen Hollywood Hercules. A guy who can slalom between skyscrapers like gravity forgot to take down his name and number. But he’s never once peeked in on me. Never once caught me, in all the times I’ve fallen. I hear he’s dating now. We do get the news here in Deadtown. Every morning in four colors. He’s got somebody prettier than a lipstick ad who’ll stay home while he fights crime, waving from a window in a goddamn apron. I bet she lives forever.

I think about Tom Thatcher a lot. Kid Mercury. I came up with that name, you know. He wanted to call himself Mr. Mercury. But I said, Tommy, that sounds like a car dealership. You’re eighteen. You’re not even halfway to being a Mister yet. We’re still kids, you and me.

The thing I hate about being dead is you can’t move on. I was in love with him when I died, so I’ll be in love with him till the sun burns out. I used to say that actual thing, curled up next to Tom in bed, my leg draped over Kid Mercury’s marvelous thigh, as romantic as a heart-shaped balloon.

I’ll love you till the sun burns out.

Well, now it’s factually, actually true and it is just a huge bummer. I’m frozen. I’m stuck. I’m Paige Embry forever, the Paige Embry that died with all that violet flame flickering in her blank eyes. I can never be anyone else. I can never see a therapist or eat all the ice cream ever made or go out with my friends and drunk-dial him and tell him I hate him and I never came when he fucked me, not even once, not even after he got his powers, and then call again in the morning and apologize and hide in my couch watching a million episodes of Law & Order all in a row. I don’t get to start dating again. I get to wait in a black window for a guy who’s never coming home.

At least it’s a nice window.

But one thing the dead do love is telling our stories. We get to take our stories with us. They don’t take up a lick of room in the suitcase. Most days I leave my apartment in Hell’s Kitchen (actual Hell’s actual Kitchen), go down to the Lethe Café, order a cup of nothing, look out the window at the blue-gas burntbone streetlamps, and wait for the girls. Ladies who lunch. Ladies who lost. You don’t have to be lonely down here if you don’t want to be. They come one by one, all big eyes and long legs, tucking strands of loose hair behind their ears, carrying pocketbooks and hats and secret griefs. Julia, Pauline, Daisy, Bayou, Samantha and more and others. Every time they open the frosted-glass door a gust of autumn leaves and moonlight blows in and sticks against the legs of the tables. They apologize to Neil, the gargoyle behind the espresso machine. He shakes his big woolly wolfshead, pulls a black ristretto shot of emptiness and says, Don’t you worry about it, honey.

It’s always autumn in Deadtown. It’s always the middle of the night, even at nine in the morning.

We call ourselves the Hell Hath Club.

There’s a lot of us. We’re mostly very beautiful and very well-read and very angry. We have seen some shit. Our numbers change—a few more this week, a few less next, depending on if anyone gets called up to the big game. You can’t keep your lunch date if some topside science jockey figures out how to make a zombie-you. We’re totally understanding about that sort of thing. She’ll be back. They always come back. Zombies never last, power sputters out, and clones don’t have the self-preservation instinct God gave a toddler in a stove shop.

I watch them come and go and, sometimes, for a minute, I think that sweet-faced geek in his lab will reanimate my rotting corpse for once. But he never looks twice at me. Never picked myself for the team for all eternity.

I guess you could call me the President of the Hell Hath Club. It’s honorary and empty and mostly means I get to the café first and hold our table. I order for everyone. I keep the minutes, such as they are. And when the girls settle in, we open our stories up like the morning edition. News, sports, stocks, funny pages. It’s all right there, neat and tidy and well-crafted and finished. Everything that ever happened to us. With a big fat D-Day headline over the part where magic became real, superheroes hit the scene, and the world went absolutely, unashamedly, giggles-and-lollipops-for-good-behavior crazy. 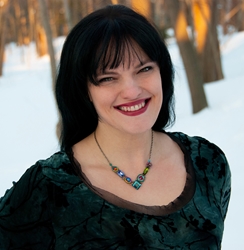 Catherynne M. Valente is the acclaimed author of The Glass Town Game, and a New York Times bestselling author of fantasy and science fiction novels, short stories, and poetry. She has been nominated for the Hugo, Nebula, and World Fantasy awards, and has won the Locus and Andre Norton award. She lives on a small island off the coast of Maine with her partner, two dogs, one enormous cat, a less enormous cat, six chickens, a red accordion, an uncompleted master’s degree, a roomful of yarn, a spinning wheel with ulterior motives, a cupboard of jam and pickles, a bookshelf full of folktales, an industrial torch, and an Oxford English Dictionary. Visit her at CatherynneMValente.com.

"This is Valente at her sharpest and most pointed, ably assisted by illustrations from comics artist Annie Wu (Black Canary)."

"Valente proves her adroitness with imagery and emotion in this extraordinary book of linked stories."

“In this novella, the superhero girlfriend gets to tell her own version of events in the afterlife. The women’s voices are strong: bitter and full of pain, yet steel-tipped in sarcasm and humor.”

""The real fun of The Refrigerator Monologues comes from Valente’s hyper-stylized voice, inflected by turns with pop, jazz, and opera as she moves from heroine to heroine, genre to genre. It’s by turns bitingly sarcastic and wistfully regretful, and always ferociously angry at the narrative in which this collection of women has been trapped.”

"The illustrations by longtime comic artist Annie Wu are an extra gift to this heartbreaking series of stories. Don’t turn from their stories, no matter how hard they can be to hear. Verdict: Buy it, damn you, and listen to their stories.”

"It’s hard to single out one tale. They are all of a piece- and they expertly dissect a common type of lazy storytelling that still crops up far too frequently. It’s not about angry polemics; instead, these monologues have their own energy and life that is both painful and captivating”

“Readers adventurous enough to parachute into unfamiliar literary territory will be rewarded by Valente’s biting wit, outlandish world-building and well-focused sense of outrage."

By Catherynne M. Valente
Illustrated by Annie Wu
PRICE MAY VARY BY RETAILER