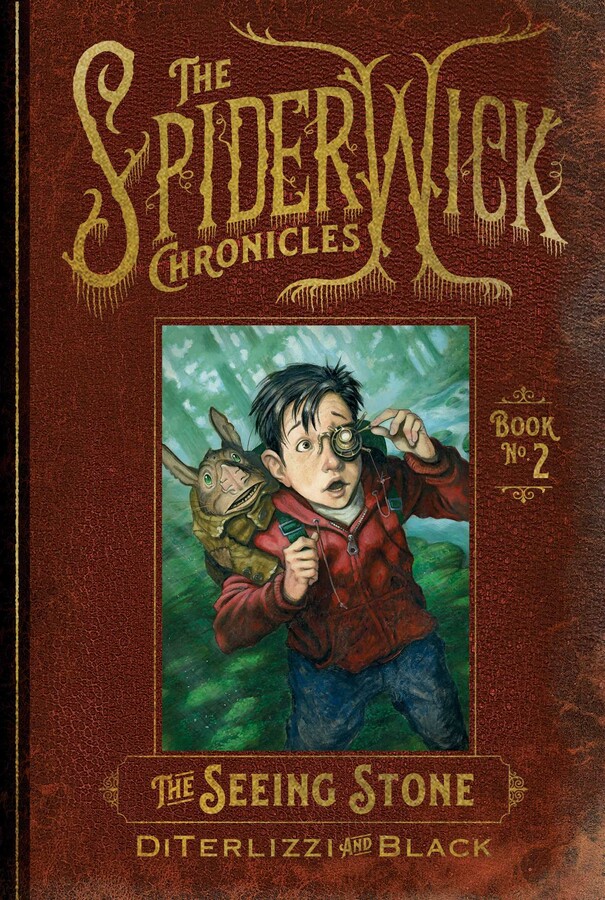 Thanks to the mysterious field guide left behind by their long-lost great-great-uncle Arthur Spiderwick, life for the Grace kids—Jared, Simon, and Mallory—is beyond weird. When Simon goes missing, Jared is convinced creatures from the faerie world have something to do with it. Mallory is not convinced. That is, until she and Jared have to contend with a band of menacing, marauding goblins. Simon is clearly in danger, and it’s up to Mallory and Simon to save him, before it’s too late…

Chapter One: IN WHICH

More Than a Cat Goes Missing

The late bus dropped Jared Grace at the bottom of his street. From there it was an uphill climb to the dilapidated old house where his family was staying until his mother found something better or his crazy old aunt wanted it back. The red and gold leaves of the low-hanging trees around the gate made the gray shingles look forlorn. The place looked as bad as Jared felt.

He couldn't believe he'd had to stay after school already.

It wasn't like he didn't try to get along with the other kids. He just wasn't good at it. Take today, for example. Sure, he'd been drawing a brownie while the teacher was talking, but he was still paying attention. More or less. And she didn't have to hold up his drawing in front of the whole class. After that, the kids wouldn't stop bothering him. Before he knew it, he was ripping some boy's notebook in half.

He'd hoped things would be better at this school. But since his parents' divorce, things had gone from bad to worse.

Jared walked into the kitchen. His twin, Simon, sat at the old farmhouse table with an untouched saucer of milk in front of him.

Simon looked up. "Have you seen Tibbs?"

"I just got home." Jared went to the fridge and took a swig of apple juice. It was so cold that it made his head hurt.

"Well, did you see him outside?" Simon asked. "I've looked everywhere."

Jared shook his head. He didn't care about the stupid cat. She was just the newest member of Simon's menagerie. One more animal wanting to be petted or fed, or jumping on his lap when he was busy.

Jared didn't know why he and Simon were so different. In movies, identical twins got cool powers like reading each other's minds with a look. It figured that the most real-life twins could do was wear the same-size pants.

Their sister, Mallory, thundered down the stairs, lugging a large bag. The hilts of fencing swords stuck out from one end.

"Hey, good job getting detention, nutcase." Mallory slung the bag over her shoulder and walked toward the back door. "At least this time, no one's nose got broken."

"Whatever. She's going to find out sooner or later." Mallory shrugged and headed out onto the lawn. Clearly this new fencing team was even more competitive than the last. Mallory had taken to practicing at every spare moment. It bordered on obsessive.

"I'm going to Arthur's library," Jared said, and started up the stairs.

"But you have to help me find Tibbs. I waited for you to get home so you could help."

"I don't have to do anything." Jared took the stairs two at a time.

In the upstairs hall he opened the linen closet and went inside. Behind the stacks of mothball-packed, yellowed sheets was the door to the house's secret room.

It was dim, lit faintly by a single window, and had the musty smell of old dust. The walls were lined with crumbling books. A massive desk covered in old papers and glass jars dominated one side of the room. Great-Great-Uncle Arthur's secret library. Jared's favorite place.

He glanced back at the painting that hung next to the entrance. A portrait of Arthur Spiderwick peered down at him with small eyes half hidden behind tiny, round glasses. Arthur didn't look that old, but he had a pinched mouth and he seemed stuffy. He certainly didn't seem like someone who would believe in faeries.

Opening the first drawer on the left-hand side of the desk, Jared tugged free a cloth-wrapped book: Arthur Spiderwick's Field Guide to the Fantastical World Around Us. He'd only found it a few weeks before, but already Jared had come to think of it as his. He kept it with him most of the time, sometimes even sleeping with it under his pillow. He would have even brought it to school, but he was afraid someone would take it from him.

There was a faint sound inside the wall.

He could never be sure when the house brownie was around.

Jared put the book down next to his latest project -- a portrait of his dad. No one, not even Simon, knew that Jared had been practicing drawing. He wasn't very good -- in fact, he was awful. But the Guide was for recording stuff, and to record well, he was going to have to learn to draw. Still, after today's humiliation, he didn't feel much like bothering. To be honest, he felt like tearing the picture of his father to pieces.

"There is a fell smell in the air," said a voice close to Jared's ear. "Best take care."

He whirled around to see a small nut-brown man dressed in a doll-size shirt and pants made from a dress sock. He was standing on one of the bookshelves at Jared's eye level, holding on to a piece of thread. At the top of the shelf, Jared could see the glint of a silver needle that the brownie had used to rappel down with.

"Could be trouble, could be nought. Whatever it is, it's what you wrought."

"You kept the book despite my advice. Sooner or later there'll be a price."

"You always say that," said Jared. "What about the price for the sock you cut up to make your outfit? Don't tell me that was Aunt Lucinda's."

Thimbletack's eyes flashed. "Do not laugh, not today. You will learn to fear the fey."

Jared sighed and walked to the window. The last thing he needed was more trouble. Below, he could see the whole backyard. Mallory was close to the carriage house, stabbing at the air with her foil. Further out, near the broken-down plank fence that separated the yard from the nearby forest, Simon stood, hands cupped, probably calling for that stupid cat. Beyond that, thick trees obscured Jared's view. Downhill, in the distance, a highway cut through the woods, looking like a black snake in tall grass.

Thimbletack grabbed hold of the thread and swung over to the window ledge. He started to speak, then just stared outside. Finally he seemed to get his voice back. "Goblins in the wood. Doesn't look good. My warning comes too late. There's no help for your fate."

"By the fence. Have you no sense?"

Jared squinted and looked in the direction the brownie indicated. There was Simon, standing very still and staring at the grass in an odd way. Jared watched in horror as his brother started to struggle. Simon twisted and struck out, but there was nothing there.

"Simon!" Jared tried to force the window open, but it was nailed shut. He pounded on the glass.

Then Simon fell to the ground, still fighting some invisible foe. A moment later, he disappeared.

"I don't see anything!" he shouted at Thimbletack. "What is going on?"

Thimbletack's black eyes gleamed. "I had forgotten, your eyes are rotten. But there is a way, if you do what I say."

"You're talking about the Sight, aren't you?"

"But how come I can see you and not the goblins?"

"We can choose to show what we want you to know."

Jared grabbed the Guide and ruffled through pages he knew nearly by heart: sketches, watercolor illustrations, and notes in his uncle's scratchy handwriting.

The little brownie leapt from the ledge to the desk.

The page beneath Jared's fingers showed different ways to get the Sight. He scanned quickly. "'Red hair. Being the seventh son of a seventh son. Faerie bathwater'?" He stopped at the last and looked up at Thimbletack, but the little brownie was pointing excitedly down the page. The illustration showed it clearly, a stone with a hole through the middle, like a ring.

"With the lens of stone, you can see what's not shown." With that, Thimbletack jumped from the desk. He skittered across the floor toward the door to the linen closet.

"We don't have time to look for rocks," Jared yelled, but what could he do except follow?

Holly Black is the author of bestselling contemporary fantasy books for kids and teens. Some of her titles include The Spiderwick Chronicles (with Tony DiTerlizzi), the Modern Faerie Tales series, the Curse Workers series, Doll Bones, The Coldest Girl in Coldtown, The Darkest Part of the Forest, the Magisterium series (with Cassandra Clare), and the Folk of the Air series. She has been a finalist for the Mythopoeic Award, a finalist for an Eisner Award, and the recipient of both an Andre Norton Award and a Newbery Honor. She lives in New England with her husband and son in a house with a secret door. Visit her at BlackHolly.com.

More books in this series: The Spiderwick Chronicles