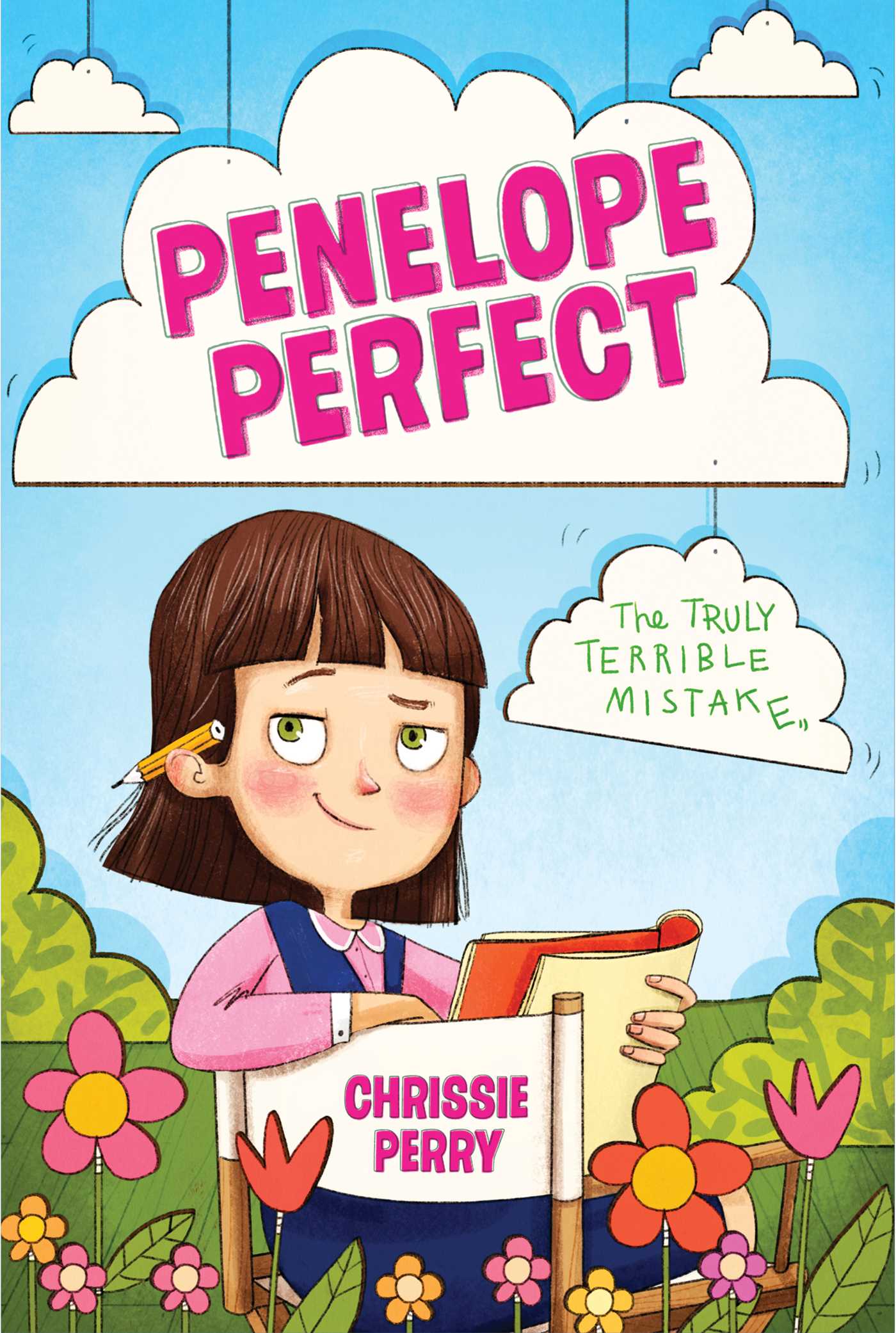 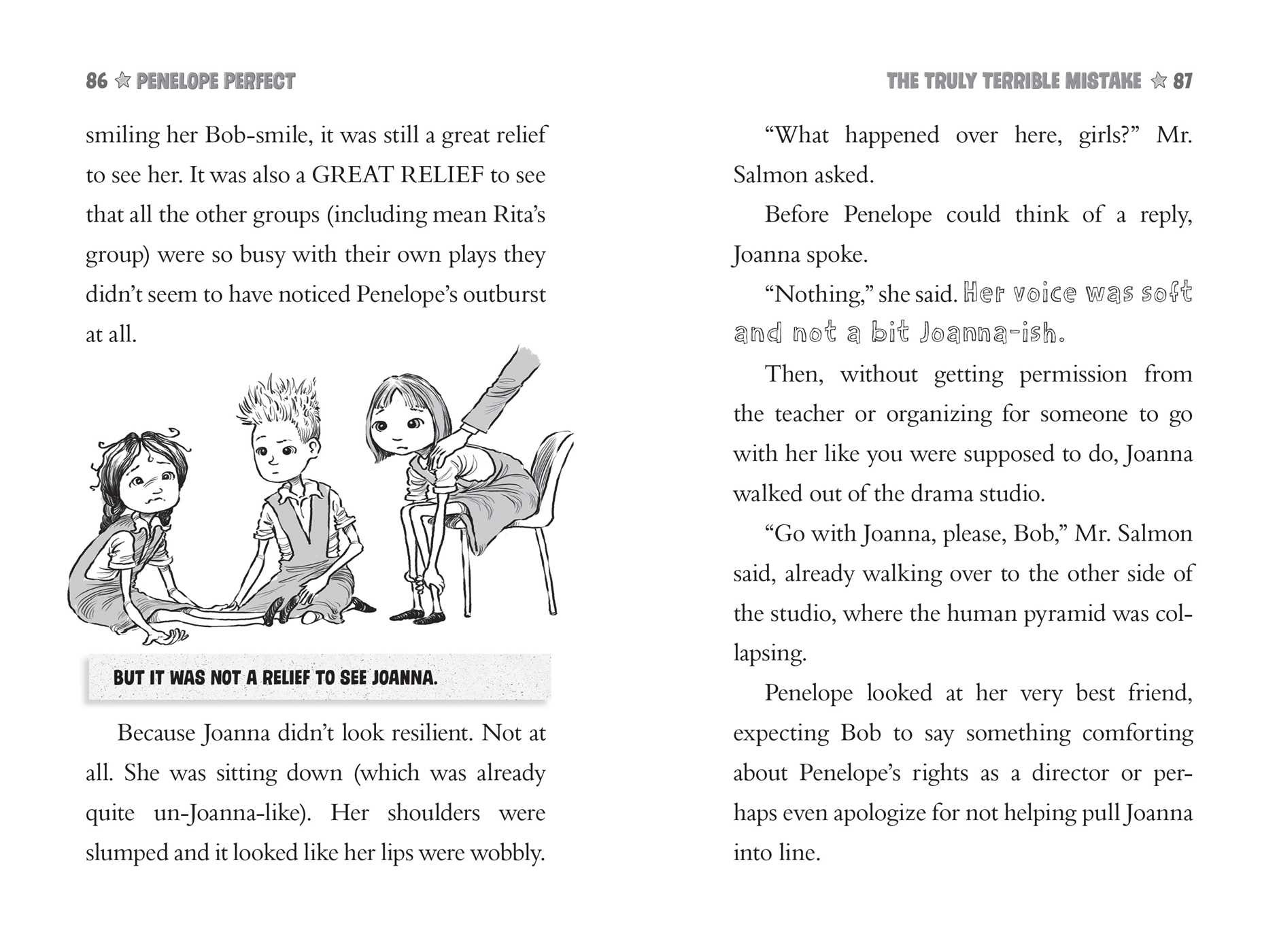 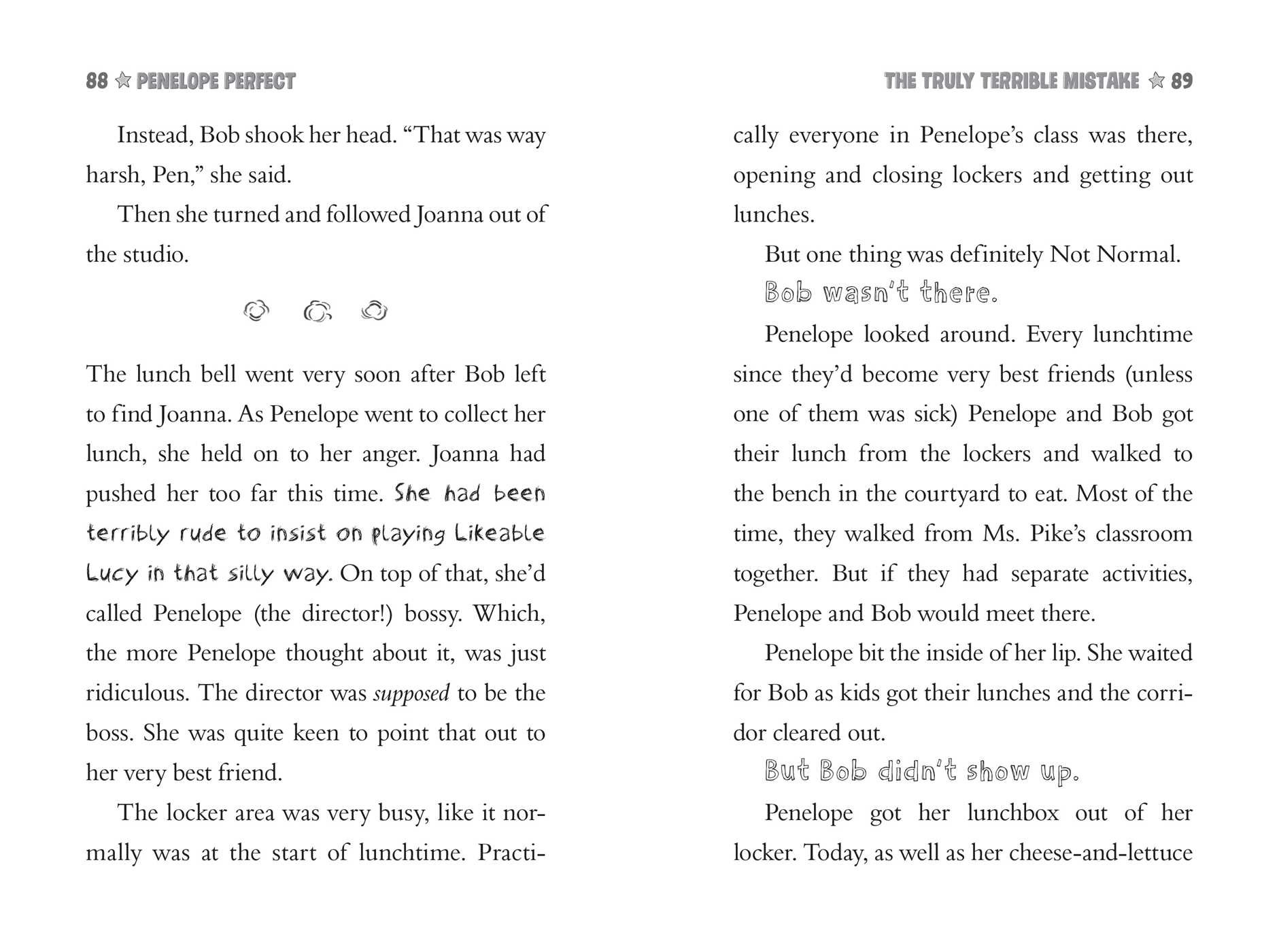 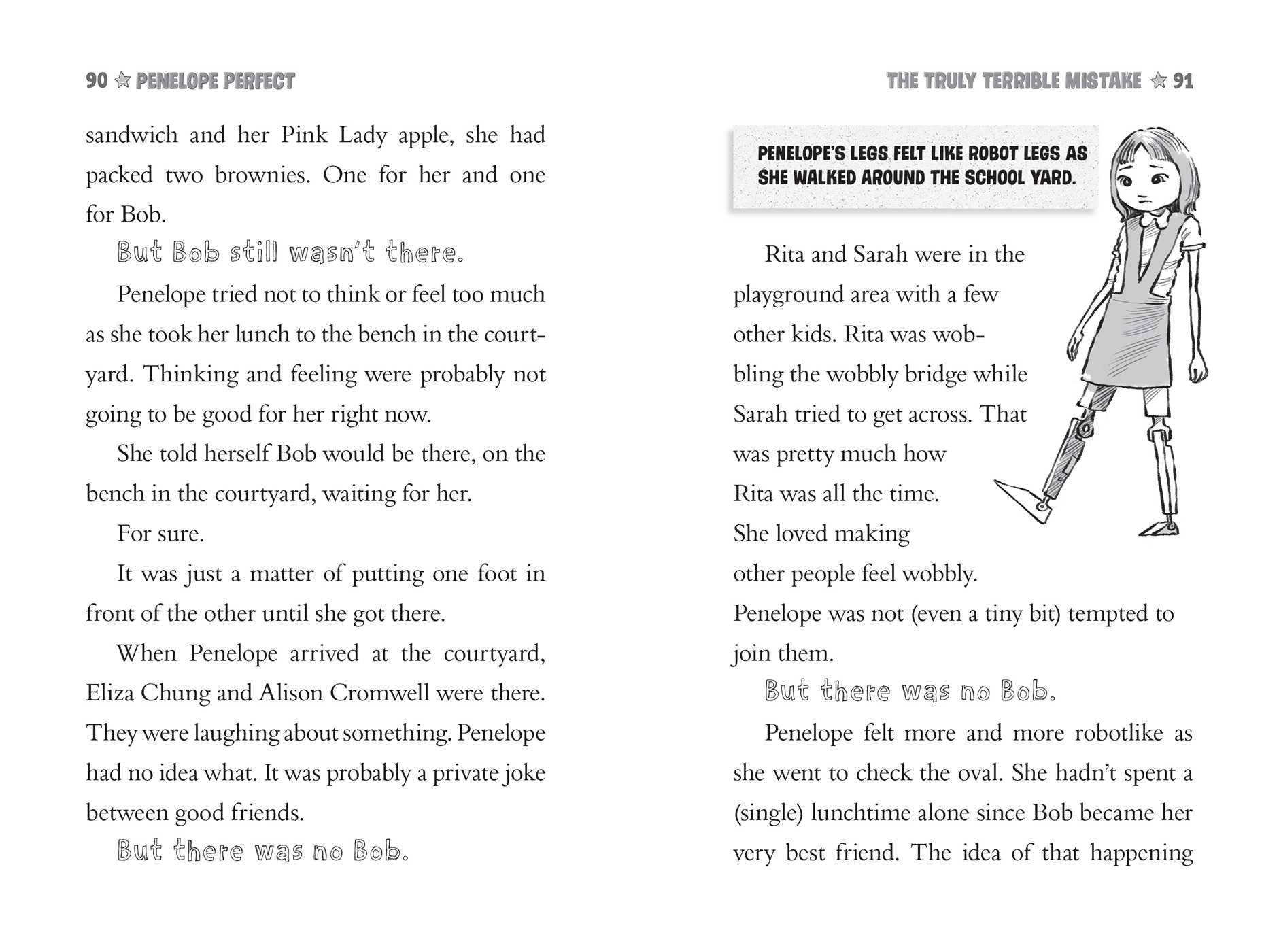 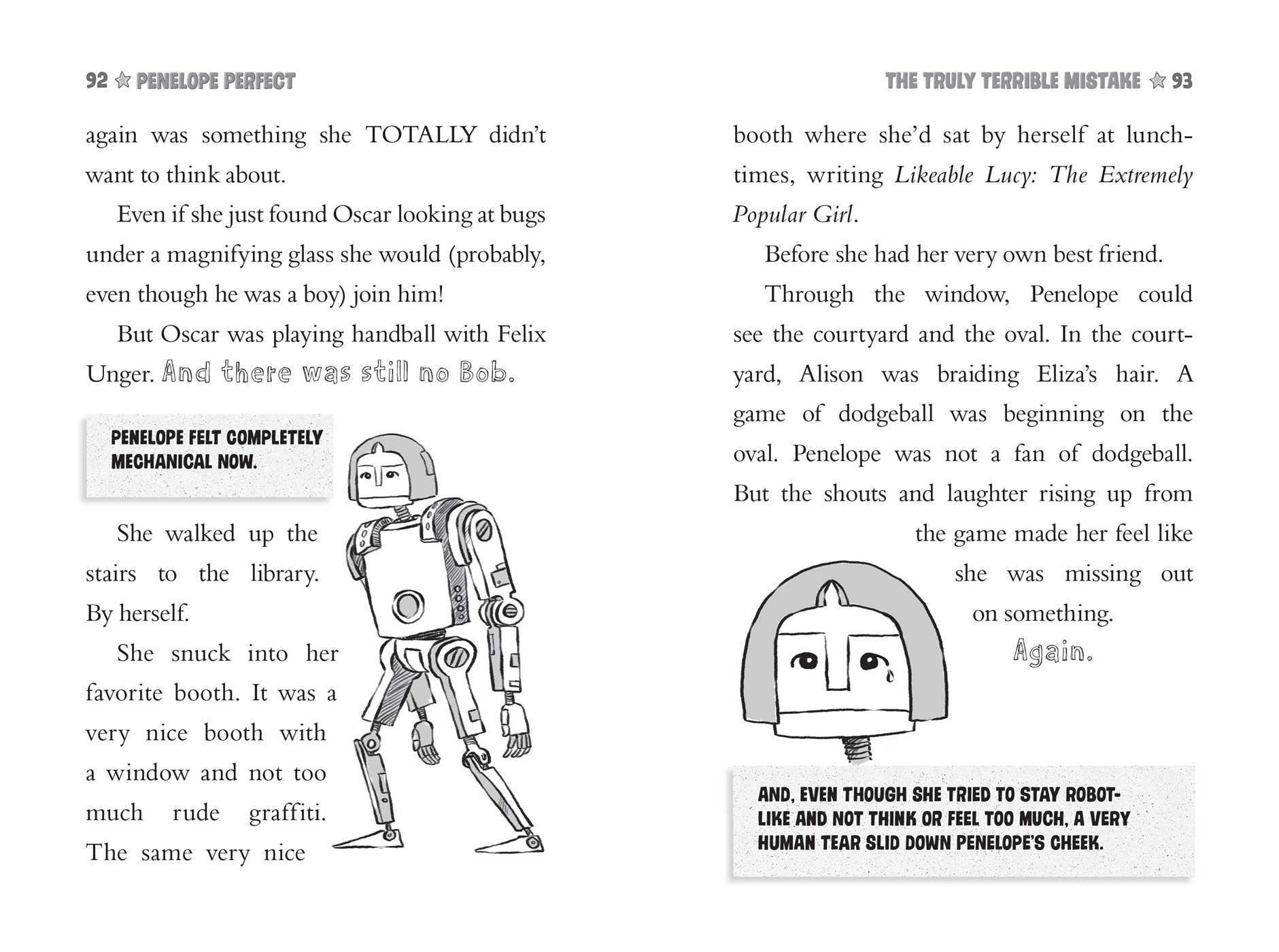 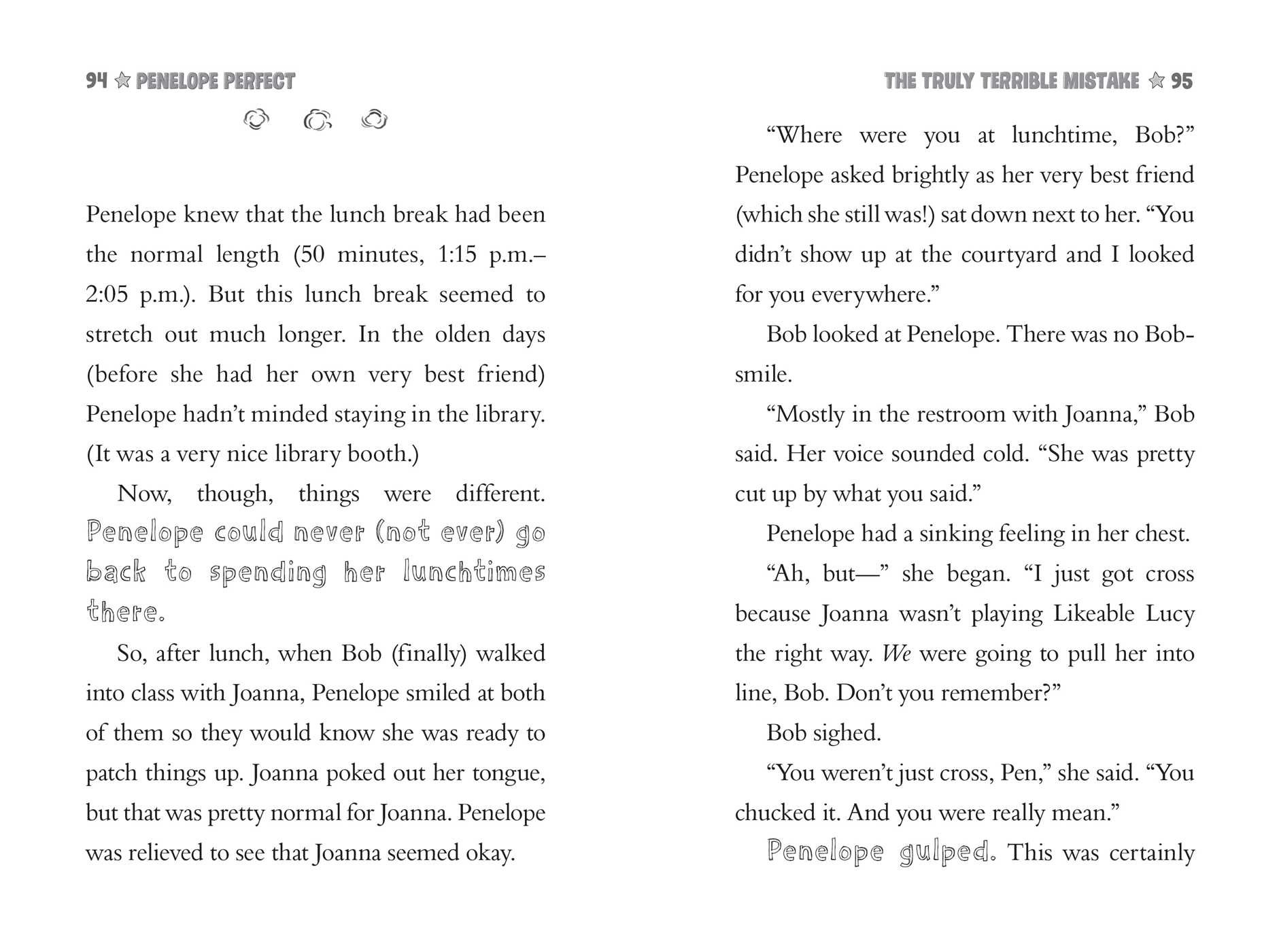 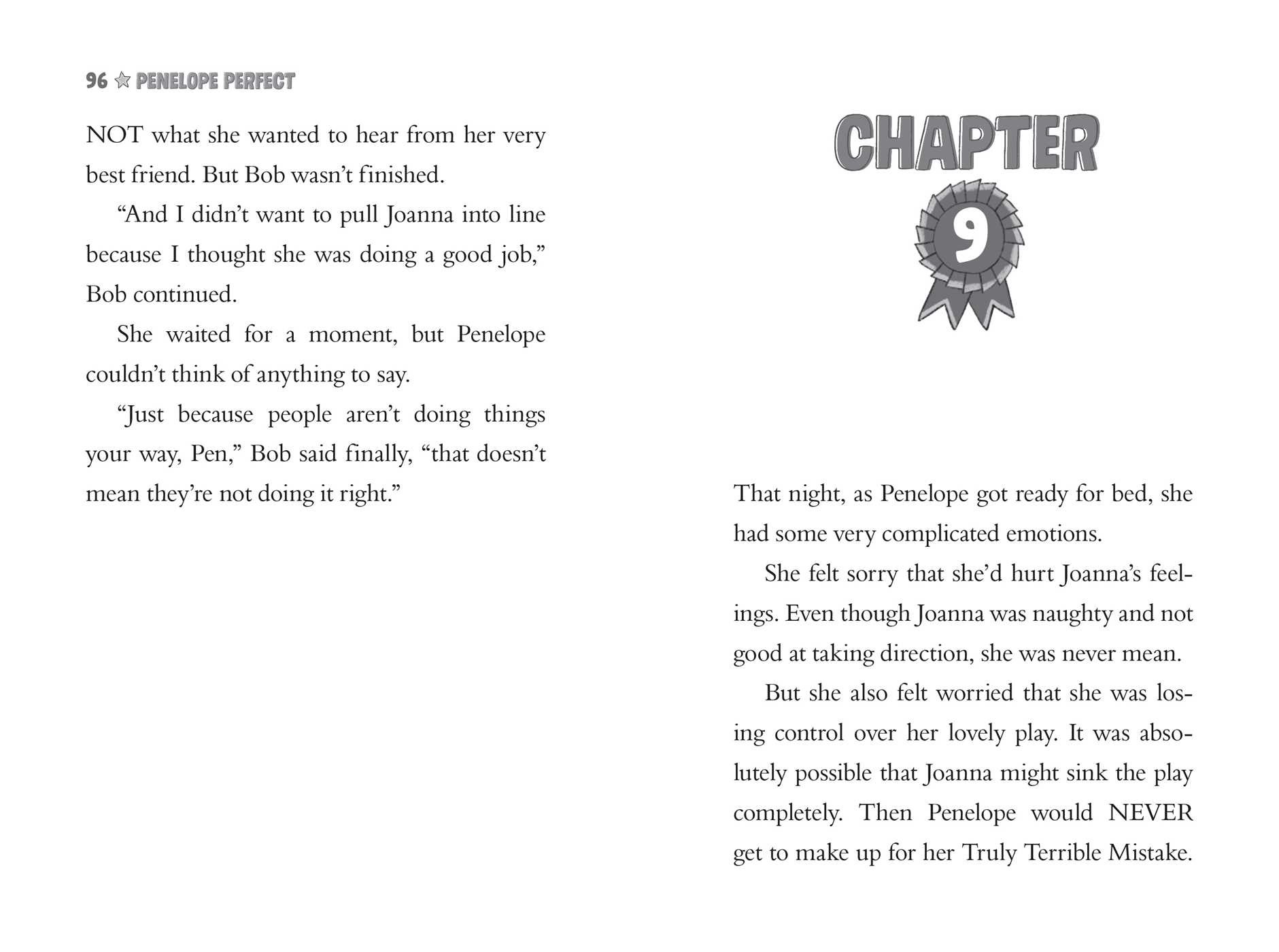 After getting a truly terrible grade, Penelope Kingston makes a plan to perfect her grades in the fourth book in the charming Penelope Perfect chapter book series.

Penelope Kingston has never, ever messed up on a test—until now. After this Truly Terrible Mistake, Penelope needs to make sure that she gets absolutely perfect grades from now on in every subject, including the dreaded drama class.

Luckily, Penelope is very good at organizing, so she figures she can be the director of the upcoming play. But can Penelope handle the naughtiest girl in class?

One thing’s for sure: Penelope Kingston didn’t get to be excellent at most things by being a quitter!


Penelope Kingston loved getting report cards. She adored seeing all her excellent grades lined up in a row. They were proof of how well she was doing at school. Penelope always sent a copy to her dad, who lived in another city. He paid her twenty dollars for every A. This meant that at the end of each term, Penelope was EXTREMELY happy with herself. ?She was also quite rich.?

Of course, it was necessary to get good grades all through the year so she could keep enjoying excellent report cards. So, at school on Monday morning, Penelope was excited as she waited for the results of her latest math test. To tell the truth (and Penelope always told the truth), she had found the test very easy. In fact, she was hoping for a ?perfect? score.

Ms. Pike was trying to get around the classroom to hand the tests back to each student. While she did that, everyone was supposed to be getting on with some English comprehension questions. Unfortunately, neither of these things was going smoothly. That was because of Joanna (the naughtiest girl in the class).

Joanna was scrunching up pieces of paper into little balls, LICKING them, putting them inside an empty pen casing, and blowing them across the classroom. So far, she’d hit two live targets. On the other side of the room, Felix Unger rubbed the back of his neck, and Tilly flicked a slobber ball off her jumper.

Ms. Pike paused and looked around, her eyes narrowed. Penelope (who was very good at deducing) figured that Ms. Pike suspected it was Joanna. But Ms. Pike was too kind and fair to accuse her without actual evidence.

As Ms. Pike leaned down to talk to Tommy Stratton about his results, Joanna launched two more missiles. Ms. Pike paused AGAIN. At this rate, it would take her half a day to get around the classroom!

Luckily, Penelope was sitting opposite Joanna and had actual evidence that she was guilty. Penelope was (quite) sure that Ms. Pike had put Joanna on her table so Penelope could influence Joanna’s BAD behavior with her own ?GOOD? behavior. It was quite a big responsibility, but Penelope didn’t mind.

“Joanna, you need to put that weapon down right now,” Penelope said in a loud whisper. She said it in a whisper because she didn’t want the other kids to think she was tattling. She made the whisper loud, though, in the hope that Ms. Pike would hear her. Sometimes Ms. Pike didn’t notice Penelope helping. This time was (unfortunately) no different.

“Hang on, will you, Penelope,” Joanna said, as though she was doing absolutely nothing wrong.

She licked two more balls of paper. Joanna often poked her tongue out, so Penelope had seen it far too many times. If she had to (though she could not think of a circumstance where she would have to), Penelope could probably describe Joanna’s tongue in great detail.

“I’ve only got two more pellets I need to shoot.”

“You actually don’t need to shoot any more pellets, Joanna,” Penelope said in another (louder) whisper. “In fact, you could stop right now, before you get into trouble and before someone gets hurt.”

Penelope thought it was a very convincing and logical argument. So when her best friend, Bob, opened her mouth to speak, Penelope was sure Bob was going to back her up.

“You know, Jo,” Bob began, leaning in toward Joanna, “you’re not doing it right. You’ve gotta use more spit and roll the balls up tighter. Then they’ll fly farther and faster.”

As she made the whooshing sound, Bob drew her hand up in the air like a rocket launching.

Penelope huffed. Even though Bob’s advice was correct, it was not Good Advice. Unfortunately Bob didn’t see her huff because she was leaning in toward Joanna. Penelope tugged her arm so she would sit back.

Bob screwed up her nose. One of the interesting things about having her very own best friend was that Penelope could often tell what Bob was about to say, based on the faces she made. Bob screwing up her nose, for instance, made Penelope suspect that she was about to disagree with her.

“I’m not exactly encouraging Joanna, Pen,” Bob said. “I’m just saying if she’s going to do it, then she could do it a lot better.”

In a weird way, it was actually quite satisfying that Penelope’s prediction was correct. It meant that Penelope really understood her best friend.

Bob was the most terrific best friend ever. Even though she sometimes saw things differently from Penelope, most of the time Penelope didn’t mind. Because Bob always told Penelope the truth about what she was thinking, and that was a Very Important Thing in a best friend.

Penelope reached over to confiscate Joanna’s pen so that she could convince Bob without being distracted. She did not confiscate the slobber balls, since that would have meant touching them. Without the pen they were useless anyway.

“Well, teaching Joanna how to do it better actually is encouraging her,” Penelope told her best friend.

“Nah,” Bob argued (she could be very stubborn!). “I think Joanna would shoot those pellets anyway.”

Normally, Penelope would have kept trying to explain why she was right, but this time she didn’t.

Because Ms. Pike was (finally) walking toward their table with the pile of tests.

“You did really well,” Ms. Pike said as she handed Joanna her test. “You should be very proud of yourself.”

As Joanna held up her test and beamed, Ms. Pike snuck Penelope one of her small but lovely smiles. Near the beginning of the year, when Joanna was struggling with math, Penelope had volunteered to coach her for half an hour a week after school. Now that Penelope had her very own best friend (and was quite a lot busier than she used to be) she sometimes wondered if it was worth giving up her time.

Sometimes, Penelope suspected (even though she always used her most calm, patient voice) that Joanna wasn’t listening. One time, she actually found proof. Penelope had heard a dull, distant doof doof sound. She’d followed the sound, lifting up a section of Joanna’s bushy hair, and discovered that she had earphones hidden underneath. That had been very upsetting. If Joanna hadn’t BEGGED for another chance, insisting that her mum was going to kill her, Penelope (even though she absolutely wasn’t a quitter) might have quit.

Now, she was glad she hadn’t. Getting one of Ms. Pike’s small but lovely smiles was very nice. ?Plus, Penelope loved helping people (even naughty ones).? 15/20 was Joanna’s best result so far.

Penelope didn’t mind that Sarah was the next person at her table to get her test back (17/20), and she was very happy for Bob (18/20). She told herself it was ?POSITIVE? that she was going to be the last person in the entire class to get her test back. Ms. Pike was stretching out the excitement.

Ms. Pike’s small but lovely smile seemed to turn into a frown as she handed Penelope her test, but Penelope didn’t think much of it. Sometimes Ms. Pike looked like that just before recess.

Penelope shut her eyes briefly. Then she looked.

Because the score on her test wasn’t a perfect score.

It wasn’t even a nearly perfect score.

“Everyone makes mistakes, Penelope,” Ms. Pike said for the third time. The other students had gone out for recess.

“Please let me do it again,” Penelope pleaded. She could hardly believe how Truly Terrible her mistake was. She had ENTIRELY MISSED five questions on the very back page. Five questions that she could (if she’d seen them!) have answered correctly. It was, perhaps, one of the STUPIDEST things she had ever done.

“I’ll do it at lunchtime. Or after school. Please, Ms. Pike.”

“I’m sorry, Penelope,” she said softly. “I can’t let you do the test again. If I let you do that, I’d have to let everyone do it every time they made a mistake.”

PENELOPE IMAGINED HER DAD LOOKING AT THE TERRIBLE REPORT CARD.

“But it wasn’t a normal mistake,” Penelope pointed out. “I know how to answer those questions. I really do. This is just”—she hit her forehead with the palm of her hand—“this is just a NIGHTMARE. I got 15/20 for a Very Important Test!”

She paused to let that sink in. And then, just in case it hadn’t sunk in properly, she continued.

“I got the same grade as Joanna! And it will RUIN my report card!”

“Penelope,” Ms. Pike said, and now her voice wasn’t as soft, “you need to learn how to cope when you don’t get a perfect grade. I’m sure you won’t make the same mistake again. You need to move on.”

“Come on, Pen,” she urged. “You’re going to waste the entire recess.” Bob looked at Ms. Pike and giggled. “No offense, Miss,” she added.

Even though Ms. Pike didn’t like being called Miss, she smiled back. Bob was the kind of person who made other people smile. Even at this Truly Terrible time, Bob made Penelope feel a tiny bit better.

“No offense taken, Bob,” Ms. Pike said. “Please do take Penelope out into the fresh air, or the recess will indeed be over.”

“Maybe I can do an extra test?” she suggested.

Penelope thought it was a Good Suggestion, but Ms. Pike must have really needed her coffee, because she just shook her head and ushered Penelope out of the classroom.
Chrissie Perry

Chrissie Perry is the author of over thirty books for children and young adults, including thirteen books in the popular Go Girl series, the award-winning Whisper, and the Penelope Perfect series. She lives in St. Kilda with her husband, three children. Like Penelope Kingston, Chrissie believes it’s great to aim for excellence. But she also has a sneaking suspicion that going with the flow every now and then can also work out just fine.

Perry sketches believable characters in familiar situations. One of the refreshing parts about this tale is that classmates pull back from bullying behavior, policing themselves when the situation seems ready to get out of hand. This series kickoff is a warmly satisfying and very useful exploration of coping strategies—and friendship.

“. . . following her [Penelope’s] thought processes offers insight into a certain kind of child. (We likely all know—or are—a Penelope.) The delightful, small black-and-white illustrations with their elegant captions sprinkled throughout the book round out the book, well, perfectly!