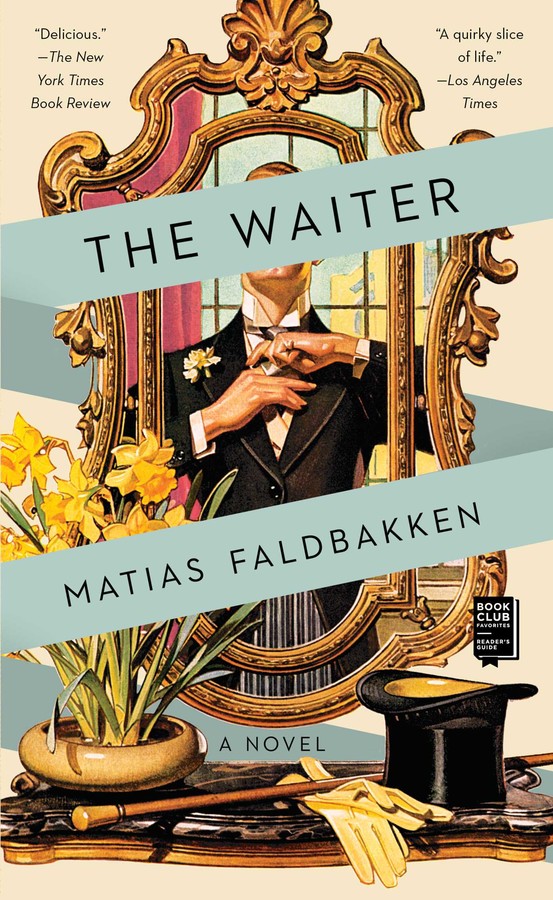 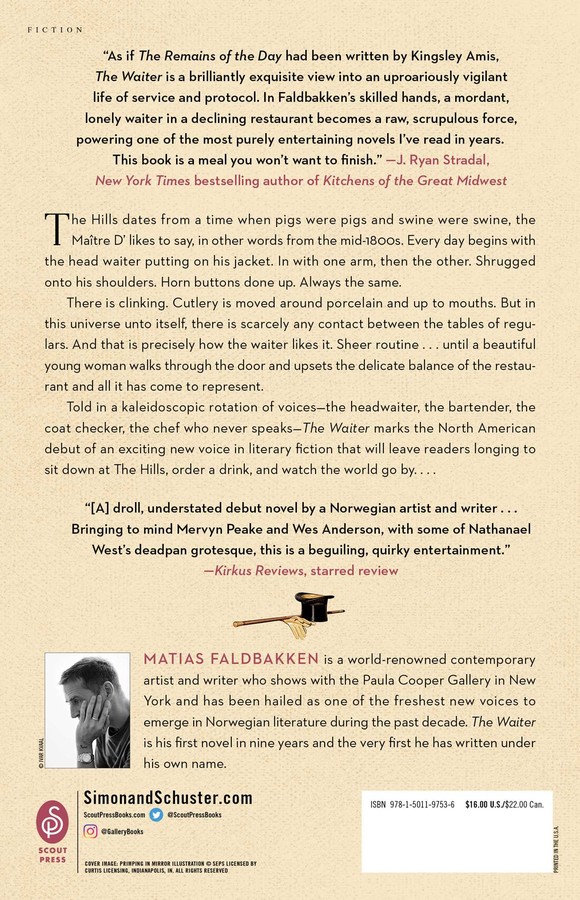 “As if The Remains of the Day had been written by Kingsley Amis, The Waiter is…one of the most purely entertaining novels I’ve read in years. This book is a meal you won’t want to finish.” —J. Ryan Stradal, New York Times bestselling author of Kitchens of the Great Midwest

In the tradition of the modern classics The Remains of the Day and A Gentleman in Moscow comes The Waiter, in which the finely tuned balance of a timeworn European restaurant is irrevocably upset by an unexpected guest.

The Hills dates from a time when pigs were pigs and swine were swine, the Maître D’ likes to say—in other words from the mid-1800s. Every day begins with the head waiter putting on his jacket. In with one arm, then the other. Shrugged onto his shoulders. Horn buttons done up. Always the same.

There is clinking. Cutlery is moved around porcelain and up to mouths. But in this universe unto itself, there is scarcely any contact between the tables of regulars. And that is precisely how the waiter likes it. Sheer routine…until a beautiful young woman walks through the door and upsets the delicate balance of the restaurant and all it has come to represent.

Told in a kaleidoscopic rotation of voices—the headwaiter, the bartender, the coat checker, the chef who never speaks—The Waiter marks the North American debut of an exciting new voice in literary fiction that will leave you longing to sit down at The Hills, order a drink, and watch the world go by….

This reading group guide for The Waiter includes an introduction, discussion questions, and ideas for enhancing your book club. The suggested questions are intended to help your reading group find new and interesting angles and topics for your discussion. We hope that these ideas will enrich your conversation and increase your enjoyment of the book.

In the tradition of modern classics The Dinner and A Gentleman in Moscow comes The Waiter, in which the finely tuned balance of a grand European restaurant (that has seen better days) is irrevocably upset by an unexpected guest.

In a centuries-old European restaurant called The Hills, a middle-aged waiter takes pride in the unchangeable aspects of his job: the well-worn uniform, the worn but solid tablecloths, and the regular diners. Some are there daily, like Graham “Le Gris”—also known as The Pig—and his dignified group of aesthetes; the slightly more free-spirited drinking company around Tom Sellers; and the closest one can get to personal friends of the waiter, Edgar and his young daughter, Anna.

In this universe unto itself, there is scarcely any contact between the tables . . . until a beautiful and well-groomed young woman walks through the door and upsets the delicate balance of the restaurant and all it has come to represent.

Like being in a snow globe, The Waiter is a captivating study in miniature. Everything is just so, and that’s exactly how the waiter needs it to be. One can understand why he becomes anxious when things begin to change. In fact, given the circumstances, anxiety just might be the most sensible response . . .

With the sophistication of The Remains of the Day and the eccentricity of The Elegance of the Hedgehog, The Waiter marks the North American debut of an exciting new voice in literary fiction.

1. The Waiter’s opening chapter propels us straight into The Hills, where everything from the décor to the music contributes to the perfect atmosphere. What role does our Waiter play in this coordinated dance with the customers?

2. We learn a little about the Maître d’ from the Waiter and the Bar Manager; how does he fit into the atmosphere at The Hills?

3. The Waiter thrives on routine: “Regularity and service act as a bulwark against inner noise. I work as much as I can,” (page 29). He finds peace and security in his job but what about being a waiter brings him comfort?

4. Everyone in The Hills is affected by the young woman’s entrance into their small community. What about the woman’s presence immediately sets them all on edge? How does the Waiter behave differently?

5. When the Pig attempts to engage the Waiter in conversation, he shuts down. He speaks to the Pig daily, so why does this specific conversation send him into a panic?

6. The Waiter and Edgar have a long-standing friendship that seems based in intellect and habit over emotion. How would you characterize their relationship?

7. Our Waiter begins making mistakes, one after another. His composure is shaken, but what has him speaking out of turn and making unsolicited suggestions? Is he trying to impress the “Child Lady”?

8. There is fallout from the Waiter’s trip into the cellar. How does such a simple journey impact his service for the rest of the evening?

9. The arrival of Sellers’s group disrupts the delicate balance within The Hills and leads to quite the dramatic exchange between his group and the Pig’s. What precise sequence of events leads to their standoff?

10. What do we learn about our Waiter from his interactions with Anna?

11. The Child Lady tries, with notable effort, to engage the Waiter in conversation about Edgar. Why does this, and their interaction the night before, unnerve him so much?

12. We see so little of the world beyond The Hills’s dining room, yet we venture into the cellar three times. How much does it differ from the first trip to the last? How does Anna’s presence change the experience?

13. The day is thrown into chaos by Edgar’s request; what does the Waiter do that is particularly out of character?

14. Now that you have seen several interactions between Anna and the Waiter, how would you characterize their relationship?

15. What do you make of the Waiter’s final summation of the night’s movements before closing? Even from the confines of his hiding place, he follows along with the goings-on outside, but there is a difference between that first description of The Hills and this. What is it?

1. While the Waiter offers a singular perspective of The Hills, there is much to be garnered from the supporting cast of characters. Describe how The Hills would appear differently through the eyes of the Bar Manager, the Chef, the Pig, the Child Lady, and Anna.

2. There are very few characters mentioned by name throughout the novel. Discuss why some are fully introduced while others are only referred to by the Waiter’s nickname for them. Elaborate on why the Waiter is among those whose name we never learn.

3. Imagine life after The Hills. Discuss what other atmospheres would suit the Waiter’s temperament. 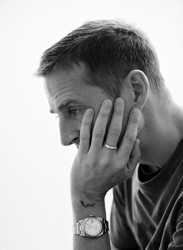 Matias Faldbakken is a world-renowned contemporary artist and writer who shows with the Paula Cooper Gallery in New York, and has been hailed as one of the freshest new voices to emerge in Norwegian literature during the past decade. The Waiter is his first novel in nine years and the very first he has written under his own name.