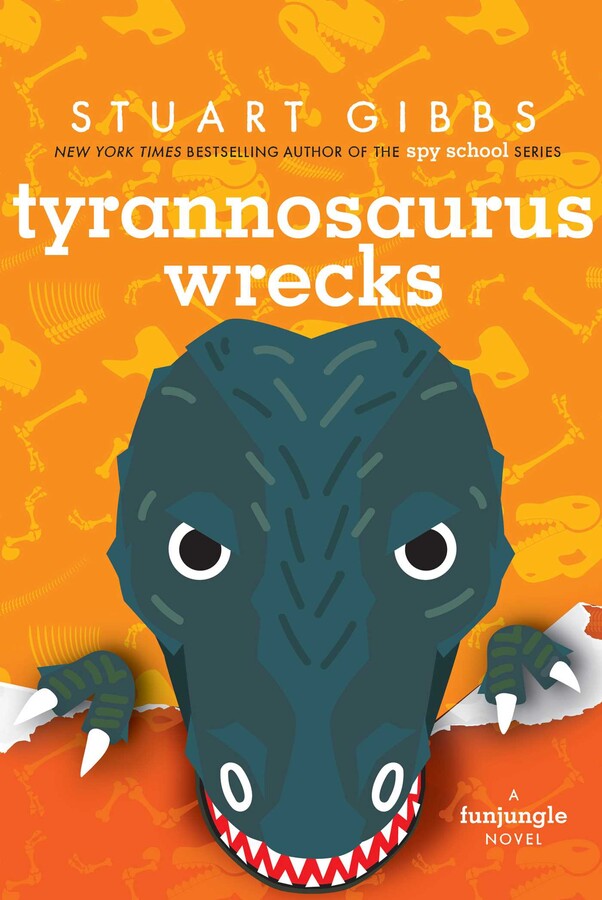 Teddy was all set for a campout at his friend Sage’s family ranch—but then Sage gets terrible news: The skull of a rare dinosaur that was being excavated on his property has mysteriously vanished overnight in the middle of a rainstorm, even though it weighed 500 pounds. Not a single footprint has been left behind. Since the dinosaur was top secret, the police don’t believe anyone outside the dig could have stolen it.

A T-rex skull can sell for millions of dollars, and everyone is a suspect—including J.J. McCracken, the owner of FunJungle.

Meanwhile, Teddy’s old foes, the Barksdale twins, have gotten into trouble with an illegally purchased anaconda, and Teddy’s girlfriend Summer wants to find out who’s behind the local trade in black market reptiles. The two cases will drag Teddy into more danger and chaos than ever before, in this mystery that’s stranger than fiction.

The following questions may be utilized throughout the study of Tyrannosaurus Wrecks as reflective writing prompts, or, alternatively, they can be used as targeted questions for class discussion and reflection.

1. Teddy tells readers, “All the trouble with the tyrannosaurus started the same day Xavier Gonzalez and I helped apprehend the zebra spanker.” What do you think makes that statement unusual? Given what you know about Teddy’s past experiences, predict what’s in store for Teddy and his friends.

2. Consider the zebra spanker’s behavior. In your opinion, why can getting attention online and on social media cause people to behave poorly? What kind of effect can this have on their lives and those of the people around them? Explain your answers.

3. When Sage asks Teddy for help, Teddy asks if Sage’s family is getting assistance from the local authorities. Xavier tells Teddy, “‘You’re way better than the police.’” In what ways might Teddy benefit from having his friends’ support and confidence in his abilities? Can you think of ways that this can also become problematic for Teddy?

4. After seeing tourists in Snakes Alive T-shirts, Xavier tells them, “‘You shouldn’t support Snakes Alive. It’s not accredited by the Association of Zoos and Aquariums. Zoos in the AZA are required to maintain high levels of animal care.’” Why is an organization like the Association of Zoos and Aquariums important to the overall well-being of animals? In what ways can unaffiliated attractions and small zoos like Snakes Alive be detrimental? How might you go about educating the public about this distinction?

5. Were you surprised to learn that Sage was in second grade when he started driving on his family’s property? Would you like to have a similar opportunity? Why do you think there is a driving age requirement? Explain your answers.

6. Upon visiting the dig site and hearing Mrs. Bonotto’s praise for successful investigations, Summer tells everyone, “‘We know how to handle a crime scene. This isn’t our first.’” Do you think Summer is right to be so confident? Why is Teddy less assured?

7. Consider how law enforcement treats Teddy’s and Summer’s presence at the crime scene. Why might the police and other law enforcement officials be bothered by their role in the investigation?

8. Throughout Tyrannosaurus Wrecks, readers learn a great deal about dinosaurs as well as snakes, lizards, and other animals that are often part of the illegal animal trade. Which animal facts most interested or surprised you? Which animals would you like to explore further?

9. After discovering that only the dinosaur’s skull has been stolen, the sheriff is told, “‘But as far as we’re concerned, the skull pretty much was the dinosaur.’” Why is that the case? Think about what you’ve learned; what makes finding a T. rex’s skull so incredibly rare and valuable? What information can it tell you? Did you have any idea of its importance?

10. Historically, Teddy’s and Summer’s investigations have been incredibly successful; however, their parents have continued to resist allowing their children to participate in solving mysteries. Why do you think that is? Did you find their behavior to be any different in this book? Can you think of any reasons for changes in attitude?

11. When Jim Barksdale reaches out to Teddy for help, he tells Teddy, “‘Tim and I just got this new pet snake, and it sort of ate our cat.’” What does learning that Jim hopes their cat is still alive reveal?

12. Based on what you know about them, what makes learning the Barksdale twins acquired an anaconda as a pet so problematic?

13. What do you think would be the best part of getting to participate in a dig such as this one? Can you think of any drawbacks or challenges to this kind of experience?

14. Sage tells Teddy, “‘Minerva’s the only thing that can save us . . . If that skull was really worth millions, it’d be enough to save our ranch. It was like stumbling across a treasure chest.’” Do you think knowing Sage and his family are in a financial crisis affects Teddy’s willingness to help solve this mystery? What other motivations might he have? Explain your answers.

15. After getting no answers as to where the Barksdales acquired the anaconda, Summer takes matters into her own hands by being flirtatious to get more information. Did you expect her plan to be effective? Why are the Barksdales hesitant to provide information about their snake source? Explain your answers.

16. Consider Teddy’s reaction to news that Summer’s father is the number one suspect in the case of the missing dinosaur skull. How did it make you feel? How do you think Summer would feel? How might you have reacted if you were in Teddy’s shoes?

17. Tommy shares Summer’s and Teddy’s frustration toward Rick’s illegal animal trading ring. Though he also wants justice to be served, he tells them, “‘The wheels of justice don’t move that fast.’” Do you agree with this statement? Explain your answer. How does this knowledge affect Summer and Teddy? In what ways does it motivate them to accelerate the process?

18. After learning that the zebra spanker inspired copycats who also want attention, Teddy tells Summer, “‘And every time we watch the videos, we feed the beasts.’” Summer defensively counters by retorting, “‘Hey, it’s not our fault this is happening.’” Do you agree more with Teddy or Summer? Explain your position, and what you feel their role should be.

19. As Tyrannosaurus Wrecks closes, Teddy and Summer have once again solved another important mystery. Predict what new mystery will come their way in the next FunJungle installment.

1. Paleontologists are at the center of this mystery surrounding a missing artifact. Readers are introduced to the work done by these specialists at universities and site locations around the world. Using library resources and the Internet, have students research to learn more about paleontology. What specialized training does one need to do this work?

Be sure to learn the following:

What kind of education is a paleontologist expected to have?

Which major universities have specialized programs?

What types of jobs do paleontologists typically hold?

What are some of the ways people interested in the science of paleontology can become involved in discovery and excavation?

After gathering this information, have students create a visual presentation that illustrates their findings.

2. Readers learn that dinosaur excavation first gained great attention around 1880. Given that historical time line, use research resources to investigate the process of dinosaur excavation to learn more about how it has changed over time. Consider choosing a dig from the early 20th century and a dig from the last twenty-five years to lead your examination of the following:

What tools are used during excavations?

Where have other dinosaur bones been located?

How is ownership assigned?

How are these excavations generally funded?

What are the benefits to an organization or institution?

After students finish their research, have them prepare presentations to share with others.

What types of animals are typically trafficked?

What countries have the highest incidences of animal trafficking?

What problems does the United States face with this issue? Can you find any data?

What are the most trafficked or sought-after animals?

What can be done to reduce the number of incidences of illegal animal trafficking?

What are the general legal consequences for animal traffickers and illegal traders?

Have students take what they’ve learned and work in small groups to discuss possible solutions and ways they can actively help raise awareness for this issue.

4. The Barksdale twins’ idea to keep a pet anaconda turns out to be far more complicated than they bargained for. Using library resources, learn more about these magnificent reptiles; alternatively, students can research other common types of wild snakes, such as a Mangshan pit viper or an emerald tree boa. Be sure to focus on the following:

What are some of the reptile’s general characteristics?

Where are they typically found in the wild?

What makes them such dangerous creatures?

Why are they not ideal pets?

Are there special sanctuaries available for their protection?

Are there any national or global conservation efforts to protect them?

What other snakes are often sold illegally as pets?

After students collate information, have them create posters to share what they’ve learned with their classmates.

5. As Dash and his friends camp out around the dig site, they hear a distant sound that Ethan suspects could be a chupacabra. Research to find out more about this mythical creature, being sure to focus on the following:

What is a chupacabra believed to be?

How is it described?

Are there specific geographic areas that have reported sightings?

What are other examples of cryptids around the world?

Have students write short essays sharing why they think these sightings and stories remain popular.

6. Readers learn that the illegal pet trade has destroyed ecosystems all over the planet. Have students discover more about how the illegal pet trade has had such a negative impact. Begin by reading this article from Time Magazine at https://time.com/longform/florida-python-hunters/. Working in small groups, ask students to discuss this topic using other research resources to inform and support their thoughts on the impact. Have them think about the following:

What are some additional examples of ecosystem destruction?

Are there any plans in place to combat this?

Who leads or funds these endeavors?

Using their new knowledge, ask students to create a visual that can be showcased and shared with others to spread awareness.

The Lexile reading level has been certified by the Lexile developer, MetaMetrics. 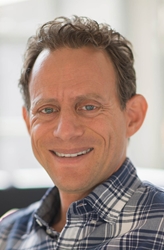 Stuart Gibbs is the author of the New York Times bestselling FunJungle, Spy School, and Moon Base Alpha series. He has written the screenplays for movies like See Spot Run and Repli-Kate, worked on a whole bunch of animated films, and developed TV shows for Nickelodeon, Disney Channel, ABC, and Fox. Stuart lives with his family in Los Angeles. You can learn more about what he’s up to at StuartGibbs.com.

More books in this series: FunJungle