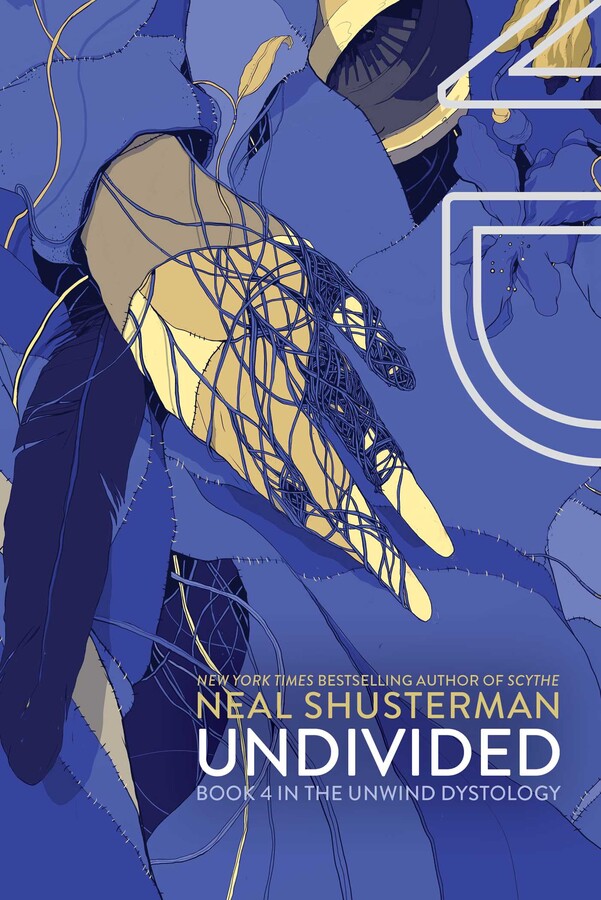 The fate of America hangs in the balance in the fourth and final book in the New York Times bestselling Unwind Dystology series by Neal Shusterman.

Cam was only the start of Proactive Citizenry’s plans for rewound teens. The corrupt company is planning to mass-produce rewound teen soldiers, and to keep their profitable plans from being interrupted, they’ve been suppressing technology that could make unwinding completely unnecessary.

When Conner, Risa, and Lev uncover these startling secrets, enraged teens march on Washington to demand justice and a better future. But more trouble is brewing. Starkey’s group of storked teens is growing more powerful and militant with each new recruit. And if they have their way, they’ll burn the harvest camps to the ground and put every adult in them before a firing squad.

Can the persecuted teens get the justice they deserve without dooming America to a divided and violent future?

UnDivided 1 • AWOL
A tranq tears past his head so close that his earlobe is skinned from the friction. A second tranq flies just beneath his armpit—he actually sees it flaring past—hitting the trash can in the alley ahead of him with a dull clank.

It’s raining. The sky has torn loose with a late summer storm of near biblical proportions, but the storm is his best friend today because the relentless torrents hinder the Juvey-cops in pursuit. The sheets of rain make it harder for them to get a bead on him.

“Running will only make it worse for you, son,” calls one of the Juvies.

He’d laugh at that if he could catch his breath. If he’s caught, he’ll be unwound; what could possibly be worse than that? And calling him “son”? How can a Juvey-cop have the nerve to call him “son” when the world no longer sees him as a child of the human race. As far as humanity is concerned, he’s an object. A bag of biomatter ripe for salvage.

There are two, maybe three Juvey-cops chasing him. He won’t turn to count them; when you’re running for your life, desperate to remain undivided, it doesn’t matter whether there’s one, or ten, or a hundred Juvey-cops behind you. All that matters is that they’re behind you—and that you run faster.

Another tranq whizzes past, but it’s not as close as the others. The Juvies are getting sloppy in their aggravation. Good. He passes an overstuffed trash can and dumps it over, hoping to slow their pursuit even more. The alley seems to go on forever. He never remembered the streets of Detroit having back alleys this long. The end finally comes into view maybe fifty yards ahead, and he’s already visualizing freedom. He’ll explode out of the alley into the city traffic. Maybe he’ll cause a car accident, like the Akron AWOL. Maybe he’ll find a tithe to use as a human shield like he did. Maybe he’ll even pair up with a beautiful accomplice too. These thoughts push purpose into his bone-tired body, and speed into his strides. The Juvies fall farther behind, and now he has a spark of the AWOL’s most valuable commodity: hope. It’s something in short supply for those who have been deemed not worth the sum of their parts.

In an instant, however, that hope is eclipsed by the silhouettes of two more Juvey-cops blocking his exit from the alley. They’ve got him trapped. He turns to see the others closing in behind him. Unless he can sprout wings and fly, it’s over for him.

Then, from a dark doorway beside him, he hears—

Someone grabs his arm, pulling him in through an open door just as a volley of tranqs shoot past.

His mysterious savior closes the door, locking out the Juvies—but what good will that do? Being surrounded in a building is just as bad as being trapped in an alley.

He leads him down rickety stairs to a dank basement. The AWOL takes a moment to size up his savior in the dim light. He seems to be three or four years older than him—eighteen, maybe even twenty. He’s pale and thin, with dark stringy hair, and weak sideburns longing to be a beard, but failing to bridge the gap.

Which seems unlikely, as he appears to be too old—on the other hand, kids who’ve been AWOL for a year or more tend to look older. It’s as if time ticks by twice as quickly for them.

In the basement, there’s a rusty sewer cap that’s been opened, and the dark hole, which couldn’t be more than a foot wide, emits a malevolent odor.

“Down you go!” says the stringy-haired dude, as cheery as Santa about to go down the chimney.

“Are you kidding me?”

From upstairs comes the report of the door being kicked in, and suddenly that sewer hole doesn’t seem like such a bad idea. He squeezes through, having to wiggle his hips and shoulders to fit. It feels like being swallowed by a snake. The stringy-haired dude slides in after him, then pulls the sewer cap closed, with a scrape of metal on concrete, sealing out the Juvies, without leaving a trace of where they went.

“They’ll never find us down here,” his strange savior says with a confidence that makes the AWOL believe him. The kid turns on a flashlight to illuminate the space around them. They’re in a six-foot cylindrical sewer main that is wet with runoff from the storm, but doesn’t seem to actually be in use. It still smells rank, but not as bad as it seemed from the other side.

“I don’t think the Akron AWOL would climb into a sewer.”

The kid grunts and leads them to a place where the sewer line is fractured, and they climb out into a concrete utility conduit that’s hung with wires and lined with hot steam pipes, which make the air oppressive.

“So who are you?” the AWOL asks his rescuer.

“Name’s Argent,” he says, “Like ‘sergeant’ without the S.” He holds out his hand for the AWOL to shake, then turns and leads the way down the steamy, narrow conduit. “This way, it’s not far.”

“I got a pretty sweet setup. Hot food and a comfortable place to sleep.”

“Sounds too good to be true.”

“I know, doesn’t it?” Argent offers him a smile almost as greasy as his hair.

“So what’s your story? Why’d you risk your ass for me?”

Argent shrugs. “Isn’t much of a risk when you know you’ve got ’em outsmarted,” he says. “Anyway, I figure it’s my civic duty. I escaped from a parts pirate a while back, now I help others less fortunate than myself. And it wasn’t just any parts pirate I got away from—it was the ex-Juvey-cop who Connor Lassiter tranq’d with his own gun. He got drummed out of the force, and now he sells the kids he catches on the black market.”

The AWOL reaches through his memory for the name. “That Neilson guy?”

“Oh, yeah—and he’s a real piece of work. A total loser. I showed him hospitality like I’m showing you, and he did this to my face.”

Only now does the AWOL see that the left half of Argent’s face is badly damaged from wounds that are still healing.

“I’m supposed to believe that the Akron AWOL did that?”

Argent nods. “Yeah, when he was a guest in my storm cellar.”

“Right.” Obviously the guy is making all of this up, but the AWOL doesn’t challenge him any further. Best not to bite the hand that’s about to feed him.

“Just a little farther,” says Argent. “You like steak?”

“Whenever I can get it.”

Argent gestures to a breach in the concrete wall through which cool air spills, smelling like fresh mold, instead of old rot. “After you.”

The AWOL climbs through to find himself in a cellar. There are other people here, but they’re not moving. It takes a moment for him to register what he’s seeing. Three teens lying on the ground, gagged and hog-tied.

But before he can finish the thought, Argent comes up behind him and puts him in a brutal choke hold that cuts off not just his windpipe, but all the blood to his brain. And the last thing that strikes the AWOL’s mind before losing consciousness is the bleak realization that he’s been swallowed by a snake after all.

"Shusterman's finale might be the best one in the series since the first...Everything culminates in an action-packed, heart-wrenching conclusion guaranteed to chill readers to the bone."

"The battle for hearts and minds--and teenage body parts--winds to a dramatic close in the finale to Shusterman's darkly satiric UnWind Dystology...true page-turner like the previous books."

"[A] lot of thought-provoking topics for discussion. The story is intriguing: a wonderful end to a unique and noteworthy series."

*"The popularity of this series is warranted: it is smart, it is dark, it is riveting, and the characters are drawn with respect. Furthermore, Shusterman’s series transcends the dystopian fan base. Libraries without books one through three should get them. Those who already have them, start the waiting list now."