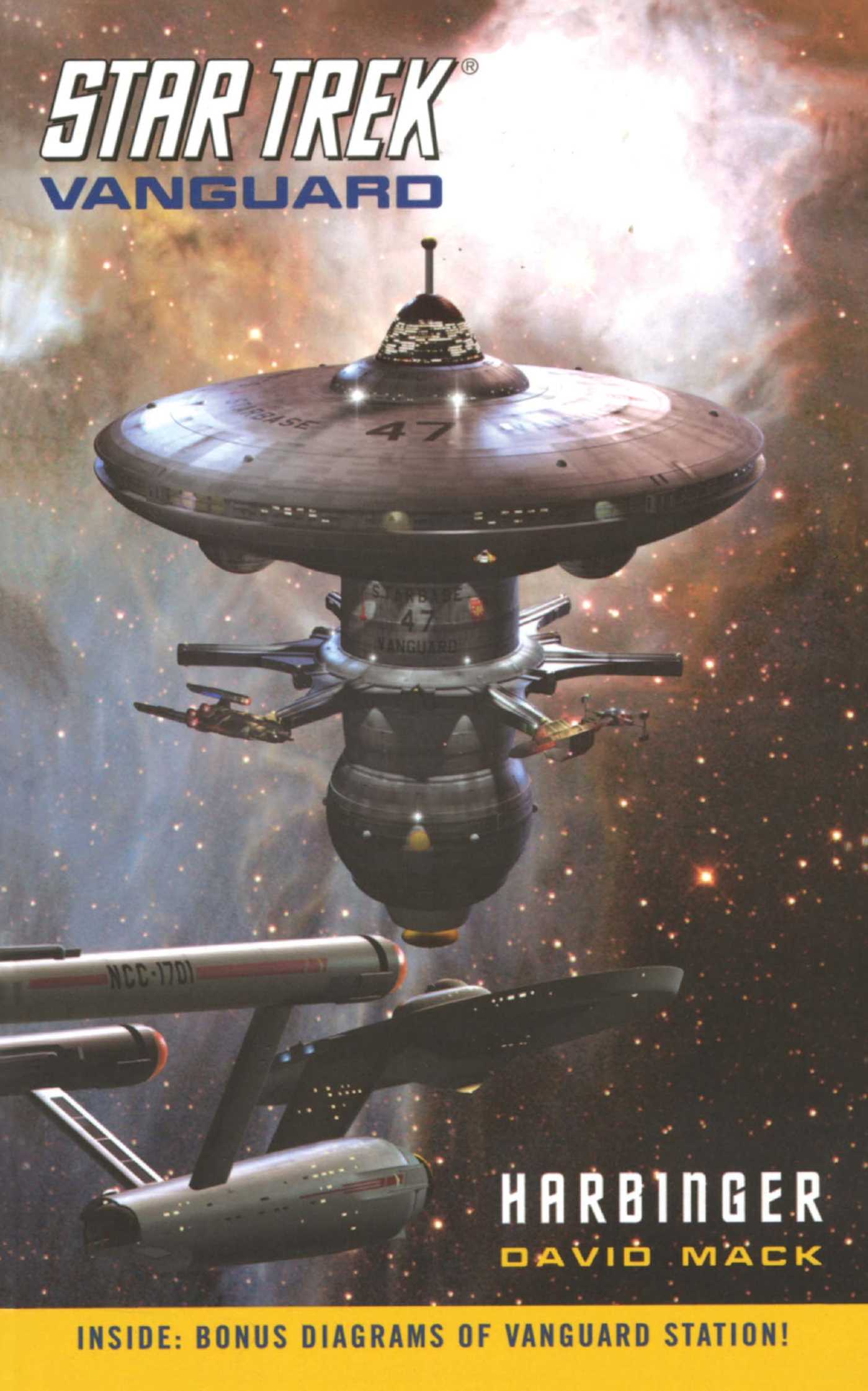 Part of Star Trek: The Original Series
By David Mack
PRICE MAY VARY BY RETAILER

From the USA TODAY bestselling author of Star Trek ®: A Time to Heal, the start of a new epic in the era of the original series.

Returning from its historic first voyage to the edge of the galaxy, the damaged U.S.S. Enterprise™ journeys through the Taurus Reach, a vast and little-known region of space in which a new starbase has been unexpectedly established. Puzzled by the Federation's interest in an area so far from its borders and so near the xenophobic Tholian Assembly, Captain James T. Kirk orders the Enterprise to put in for repairs at the new space station: Starbase 47, also known as Vanguard.

As Kirk ponders the mystery of the enormous base, he begins to suspect that there is much more to Vanguard than meets the eye. It's a suspicion shared by the Tholians, the Orions, and the Klingon Empire, each of whom believes that there are less than benign motives behind the Federation's sudden and unexplained desire to explore and colonize the Taurus Reach.

But when a calamity deep within the Reach threatens to compromise Starfleet's continued presence in the region, Kirk, Spock, and several key specialists from the Enterprise must assist Vanguard's crew in investigating the cause of the disaster and containing the damage. In the process, they learn the true purpose behind the creation of Vanguard, and what the outcome of its mission may mean for life throughout that part of the galaxy.

Inside: Bonus diagrams of Vanguard station!

Harbinger 1
Captain James T. Kirk walked alone through the crowded, busy corridors of the Enterprise. He moved quickly, like a man with a purpose, but the truth was that he had been wandering without a destination for the better part of an hour. Memories of Delta Vega haunted him. Gary Mitchell’s eyes, fiercely aglow with the alien power that had corrupted him, refused to stop staring back at Kirk every time he tried to sleep. Night after night, the ghost of Kirk’s best friend, dead by his hand, awaited him in his dreams, his spectral stare an inescapable silent reproach.

Even though the power packs Scotty had salvaged from the Delta Vega lithium-cracking station had enabled the Enterprise’s warp engines to be restarted, the ship’s current top speed was well short of its rated maximum. At their current best possible speed, they were still months from the nearest Federation base. By now Kirk’s after-action report—filed via subspace radio—had likely reached Starfleet Command. He did not regret the simple notation he had entered for Mitchell, despite the fact that the man had tried to commandeer the Enterprise and had turned his new psionic powers against Kirk. The young captain continued to remind himself that the being who had jeopardized his ship and crew had not been Gary Mitchell—not really. After the Enterprise’s failure to breach the energy barrier at the edge of the galaxy, Mitchell—and, later, psychiatrist Dr. Elizabeth Dehner—had been changed by the experience, transformed. Kirk had to believe that the man he had known would not have been capable of such casual cruelty…of murder. Instead, he had noted in his log only that Mitchell had died “in the line of duty.”

A door opened as Kirk passed by, and the aroma of fresh coffee lured him into the galley. Dr. Mark Piper sat alone at a table, gratefully inhaling wisps of hot vapor snaking upward from his burnished aluminum mug. “Morning, Captain,” the grizzled, aging physician said, his voice rough.

The greeting brought Kirk up short. “Is it?” He checked the ship’s chronometer, mounted over the galley door.

“I guess it is,” Kirk said with a wan grin. “Burning the midnight oil?”

“Emergency call,” Piper said. “Nothing serious enough to wake you for. But I guess that’s not an issue.”

Kirk stood in front of the food dispenser, eyeing his choices. “Who was it?”

“Alden,” Piper said, then puffed gently on his coffee.

None of the menu choices appealed to Kirk. He sat down across from Piper. “What happened?”

“An accident in engineering.” He took another sip, inhaled through gritted teeth, and set down his mug. “Spock’s probably writing the report for your morning briefing even as we speak.”

“No doubt,” Kirk said. His half-Vulcan first officer was nothing if not efficient. However, the same suppression of emotion that enabled Spock to exercise unimpeachable logic in his other official capacity, as ship’s science officer, had also led him to urge Kirk to kill Gary Mitchell before his new powers drove him to enslave or exterminate the Enterprise crew. Kirk had not heeded Spock’s warning, and helmsman Lee Kelso had paid for Kirk’s mistake with his life. The captain knew that it was absurd to blame Spock for what happened, or to be angry with him for being so quick to condemn Mitchell to death. Spock’s chief duty as first officer was to protect the ship and its crew, even if that meant sacrificing one to save the others.

Knowing those things made Mitchell’s death no easier for Kirk to accept, however. He had pulled the trigger and brought a ton of rock down on his friend. No amount of rationalization was going to erase the lingering guilt that had shadowed his every thought since that desperate moment.

After a silent minute, Piper said, “You should eat something.”

“Try getting some sleep, then.”

“On this ship, I guess that’s true.” Piper grabbed his mug and stood up. “I have to head back to sickbay. Want to stop in and say hi to Alden?”

Before he could accept the invitation, Kirk was cut off by a two-note whistle from the overhead speaker. “Captain Kirk to the bridge,” came Spock’s voice over the intraship channel.

Stepping away from the table, Kirk thumbed the transmitter switch on a nearby wall panel. “On my way. Kirk out.” He closed the channel and looked back at Piper. “Give my best to Alden.”

Piper’s reply of “Aye, Captain” trailed Kirk as he exited the galley, grateful for something new to think about.

Spock rose from the center seat as Captain Kirk emerged from the turbolift. “Report,” the captain said, making a beeline for his chair. He seemed primed to face a crisis that did not exist.

“Receiving an audio-only hail from a Federation outpost, Captain,” Spock said, moving to the right of the captain’s seat.

Rather than sit, Kirk stood to the left of his chair while he assessed the situation. “Which one?”

“Vanguard?” Kirk narrowed his eyes while he pondered that information. Spock had yet to determine what benefit the captain accrued to his concentration by reducing his visual acuity. “I thought that base was years away from being operational.”

“Apparently not.” Spock added, “They await our reply.”

The captain glanced at Spock but said nothing. In one fluid motion he pivoted into his chair and swiveled it toward the communications officer. “Lieutenant Uhura, patch them in.”

“Starbase 47, this is Captain James T. Kirk of the Starship Enterprise. Do you read me?”

“We read you, Enterprise,” a youthful-sounding female voice said. “Go ahead.”

“We require extensive repairs to a number of key systems. Are you in a position to assist us with maintenance?”

“Affirmative, Captain. Should we clear a berth for you?”

The captain frowned before he answered. “Please.”

“Consider it done. What’s your ETA?”

The channel clicked off. Kirk leaned on his elbow and stared hard at the slow drift of starlight across the main viewer. Under his breath he said to Spock, “A fully operational starbase, all the way out here. Must be our lucky day.”

Spock sensed the suspicion radiating from his commanding officer. “You seem less than encouraged by the news, Captain.”

“How long does it take to build a Watchtower-class station, Spock?”

“And how long ago was the Vanguard project initiated?”

The first officer watched the slow curling of Kirk’s hand into a fist. “Somebody was in a big hurry to get this station built. With all the saber-rattling the Klingons have been doing, why put a major base this far from the Federation?”

Spock considered the most likely possibilities. “Support for a colonization effort?”

“In the absence of another rationale, it would be the most logical explanation.”

“Dig up everything in the databanks on Vanguard,” Kirk said. “I want a full briefing before we make port.”

Part of Star Trek: The Original Series
By David Mack
PRICE MAY VARY BY RETAILER