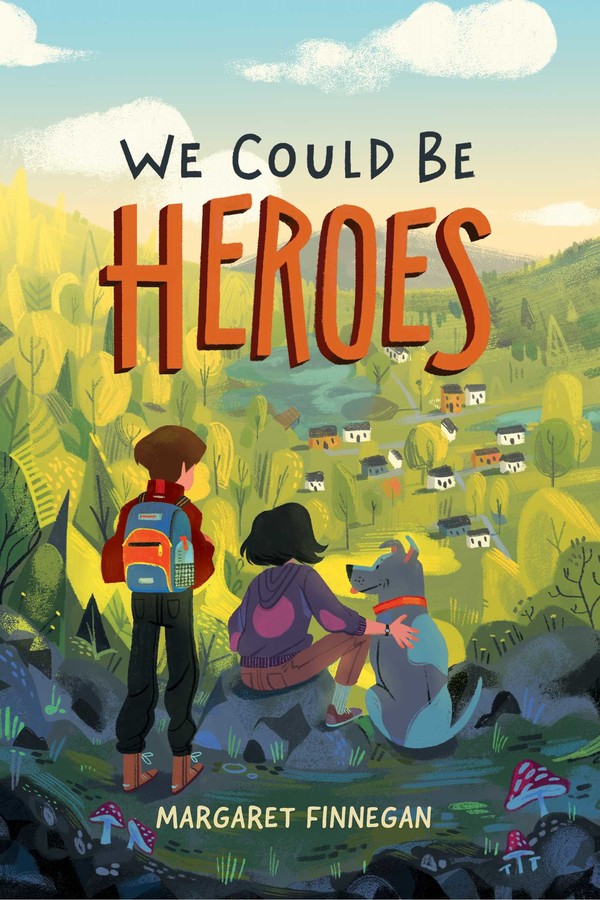 We Could Be Heroes

By Margaret Finnegan
PRICE MAY VARY BY RETAILER

Shiloh meets Raymie Nightingale in this funny and heartwarming debut novel about a ten-year-old that finds himself in a whole mess of trouble when his new friend Maisie recruits him to save the dog next door.

Hank Hudson is in a bit of trouble. After an incident involving the boy’s bathroom and a terribly sad book his teacher is forcing them to read, Hank is left with a week’s suspension and a slightly charred hardcover—and, it turns out, the attention of new girl Maisie Huang.

Maisie has been on the lookout for a kid with the meatballs to help her with a very important mission: Saving her neighbor’s dog, Booler. Booler has seizures, and his owner, Mr. Jorgensen, keeps him tied to a tree all day and night because of them. It’s enough to make Hank even sadder than that book does—he has autism, and he knows what it’s like to be treated poorly because of something that makes you different.

But different is not less. And Hank is willing to get into even more trouble to prove it. Soon he and Maisie are lying, brown-nosing, baking, and cow milking all in the name of saving Booler—but not everything is as it seems. Booler might not be the only one who needs saving. And being a hero can look a lot like being a friend.


Hank had things totally under control until he actually held up his brand-new Survival 4000 Fire Striker with Compass and Whistle—the one he got for his birthday, the one that he was only supposed to take camping—to Mrs. Vera’s book. Then the unthinkable happened. The 495-page torture device that she had been reading to the class for the last week—the one he had begged her to put away, the one about the thin, starving, scared boy who would most certainly be killed by Nazis—would not burn. Maybe it was the hard cover. Maybe the boys’ bathroom, where Hank stood committing his crime of passion, repelled fire. Maybe his mom was right after all: You never, ever, ever, ever burn books. Whatever it was, the paper merely ruffled and let off a little smoke.

Worry set in. He only had a few minutes of lunch left, and if he didn’t get the job done now, he’d be forced to suffer another afternoon with that terrible, terrible book. But that was when all those weekends of roughing it with his family in the Montana wilderness paid off. Because Hank knew that fires need kindling, and do you know what makes good kindling? Paper towels. Hank took all of them from the dispenser and spread them into a little pile on the ground. Then, like he was returning a precious dragon’s egg to its nest, he settled the book on top of the paper towels. He picked up his fire striker. He slammed the stainless steel rod against the magnesium-coated bar and watched as a spark smoldered on the paper towels and then erupted into flames.

Hank took a step back. The fire began to eat away at the paper towels and then at the book. Relief settled over him and his whole body felt lighter. Finally, he was free. He was free of the story. He was free of the boy. He was free of all the fourth graders seeing him cry every time the Nazi soldiers made the boy’s sad and scary life even sadder and scarier.

But then the smoke detector went off. And the sprinklers on the ceiling sprouted water. And Hank thought maybe it was time to leave.

Here, Hank got lucky. He slipped out of the bathroom and grabbed his down coat from the empty classroom before anyone saw him. Then—his hood covering his wet head—he walked all casual-like out of the building and over to the field. Of course no one noticed him then. No one ever noticed Hank. They didn’t notice him enough to be friends with him. They didn’t even notice him enough to be mean to him. And if they didn’t notice him when things were regular, there was no way they would notice him with the fire alarm blaring across the field.

Students who only moments earlier had been poking at the pale lunch meats in their sandwiches were now scrambling onto the field, sorting themselves into long alphabetical lines, just like they had practiced during all those emergency drills. Hank, who even seven months into the school year had a hard time keeping his classmates straight, wandered to the end of his line and tried to look cool.

The new girl—the one who had moved to Meadowlark a few months ago—hollered, “Up here, Hank. You need to be up here.”

“Up there, Hank,” repeated the boy in front of Hank. “You need to stand behind Maisie. Hudson goes after Huang.”

Hank crunched through the dusting of snow that sparkled on the brown and muddy field. He saw Maisie watching him and lowered his gaze.

“I wonder if there’s really a fire or if this is just a drill,” said Maisie, bubbly and excited. She was taller than him and had black hair that grazed her chin. Despite the spring snowstorm that had snuck up on everyone in the night, she wore a thin pink coat and red plastic rain boots. Hank used to have boots like them and he had always liked the squelching sound they made when he moved through mud. His heart gave a hiccup as he wondered what had ever happened to those boots.

Maisie shuffled left and right to better see around the lines of students. “I think maybe it’s a real fire because I’ve never seen a drill during recess. Have you?”

“Shhh. I’m listening to your shoes.”

She turned around and peered at him. “You’re listening to my shoes? That’s the strangest thing I’ve ever heard.” Her eyes narrowing, she added, “Hey, how come you’re wet?”

She stepped back and scanned his whole body, her head moving up and down. “Your bangs are wet and your pants and shoes are wet too.”

When Maisie didn’t answer, Hank slid his eyes over to find her staring straight at him, her lips squeezed tight. His insides went cold and he looked away again. He slipped his hand in his pants pocket and grasped his three rocks of the day—carefully chosen, as usual, from his rocks and minerals collection.

He whispered the names of the rocks—“unakite, feldspar, augite”—to distract him from the weight of Maisie’s stare.

“I got my eye on you,” she said, changing from bubbly to dangerous with that one little phrase.

Hank turned sideways and his shoulders gave a small shudder. He did not like the idea of Maisie’s eye on him.

And then some firefighters in fluorescent jackets that shouted yellow came in the yard and the principal went and talked to them. Hank saw them hand her something. It was a very soggy book with a charred cover. He saw the principal hold the dripping book out in front of her like it was a stinking fish on a hook. Then Mrs. Vera shuffled over to the principal. The two women talked for a minute before they both looked over at Hank, who slowly pulled on the drawstring of his hood until all he could see was a wall of black.

“Oh, boy,” said Maisie, her voice trumpeting through the cushioned padding of the hood. “You are in big trouble.”

Margaret Finnegan’s work has appeared in FamilyFun, the Los Angeles Times, Salon, and other publications. She lives in South Pasadena, California, where she enjoys spending time with her family, walking her dog, and baking really good chocolate cakes. Connect with her at MargaretFinnegan.com.

"A coming-of-age story of friendships young, old, and canine."

"[A] good-natured tale of two unlikely friends determined to save a life."

"A lively story about ethics and friendship compelling for the neurodivergent and neurotypical alike."

"[A] heart-warming story of friendship."

"Touching, often humorous... An excellent choice for a classroom read-aloud."

We Could Be Heroes discussion guide (pdf)

We Could Be Heroes

By Margaret Finnegan
PRICE MAY VARY BY RETAILER