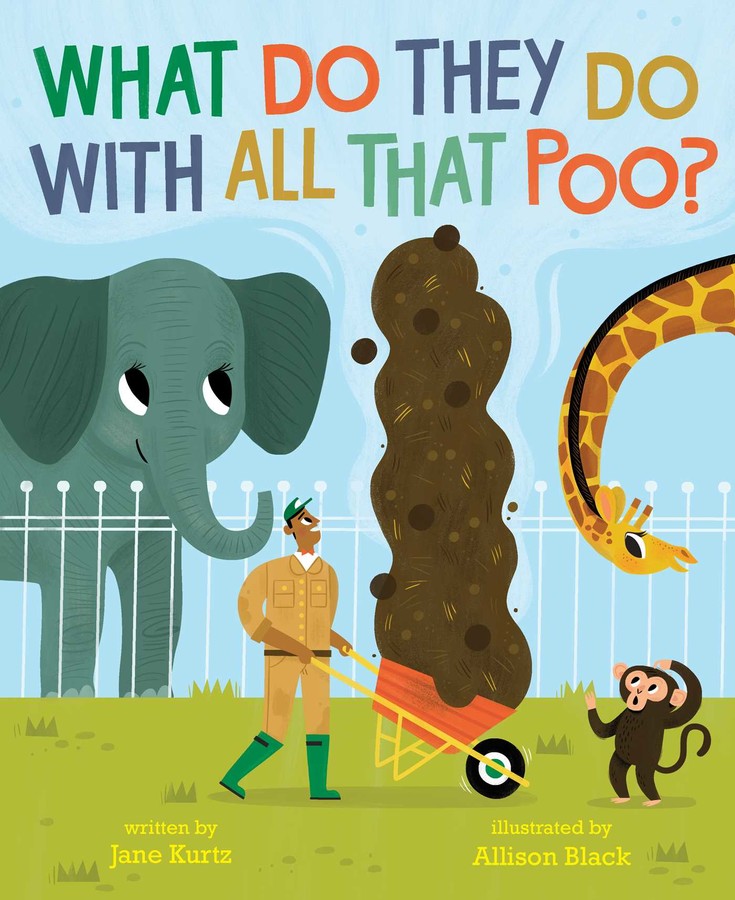 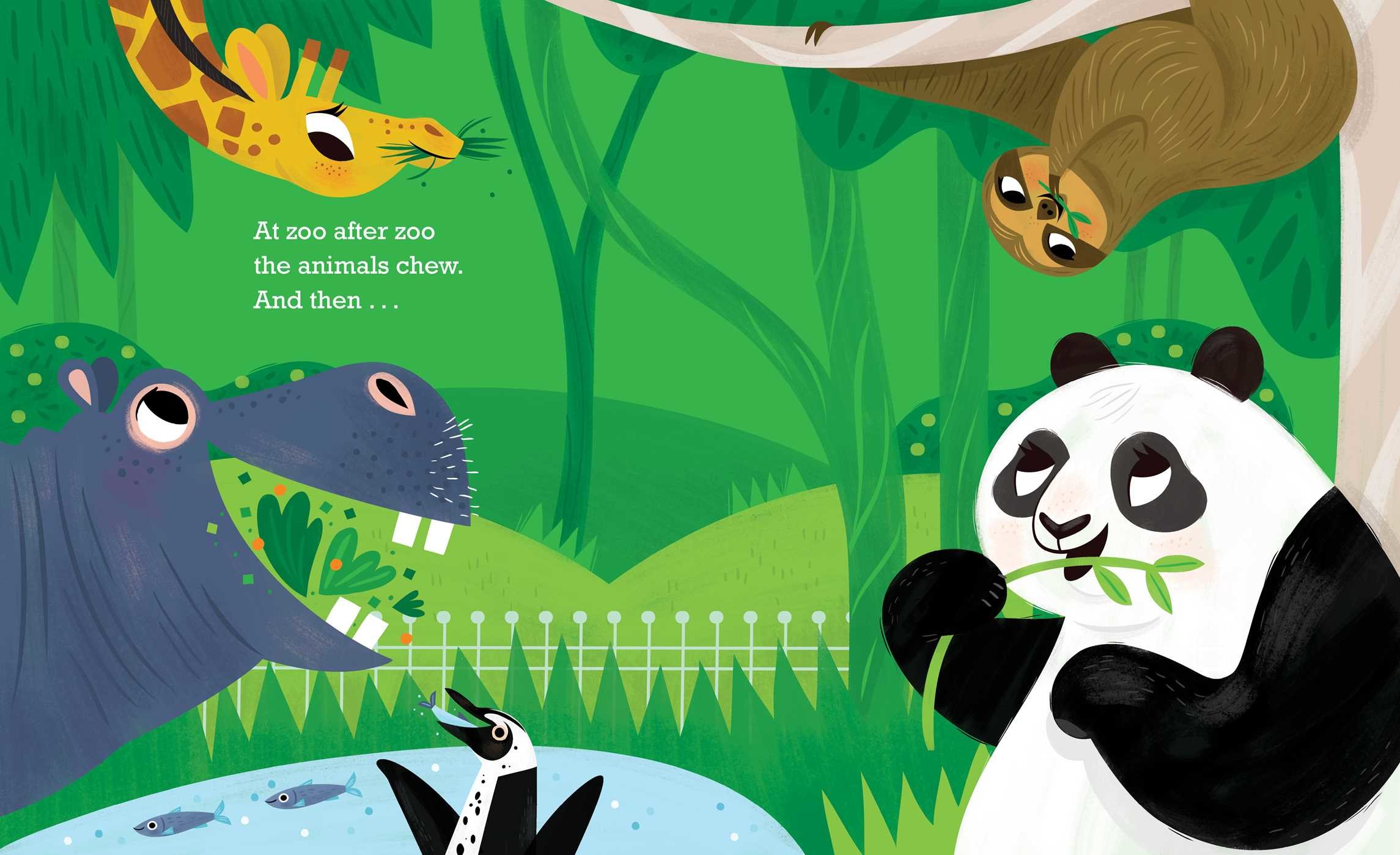 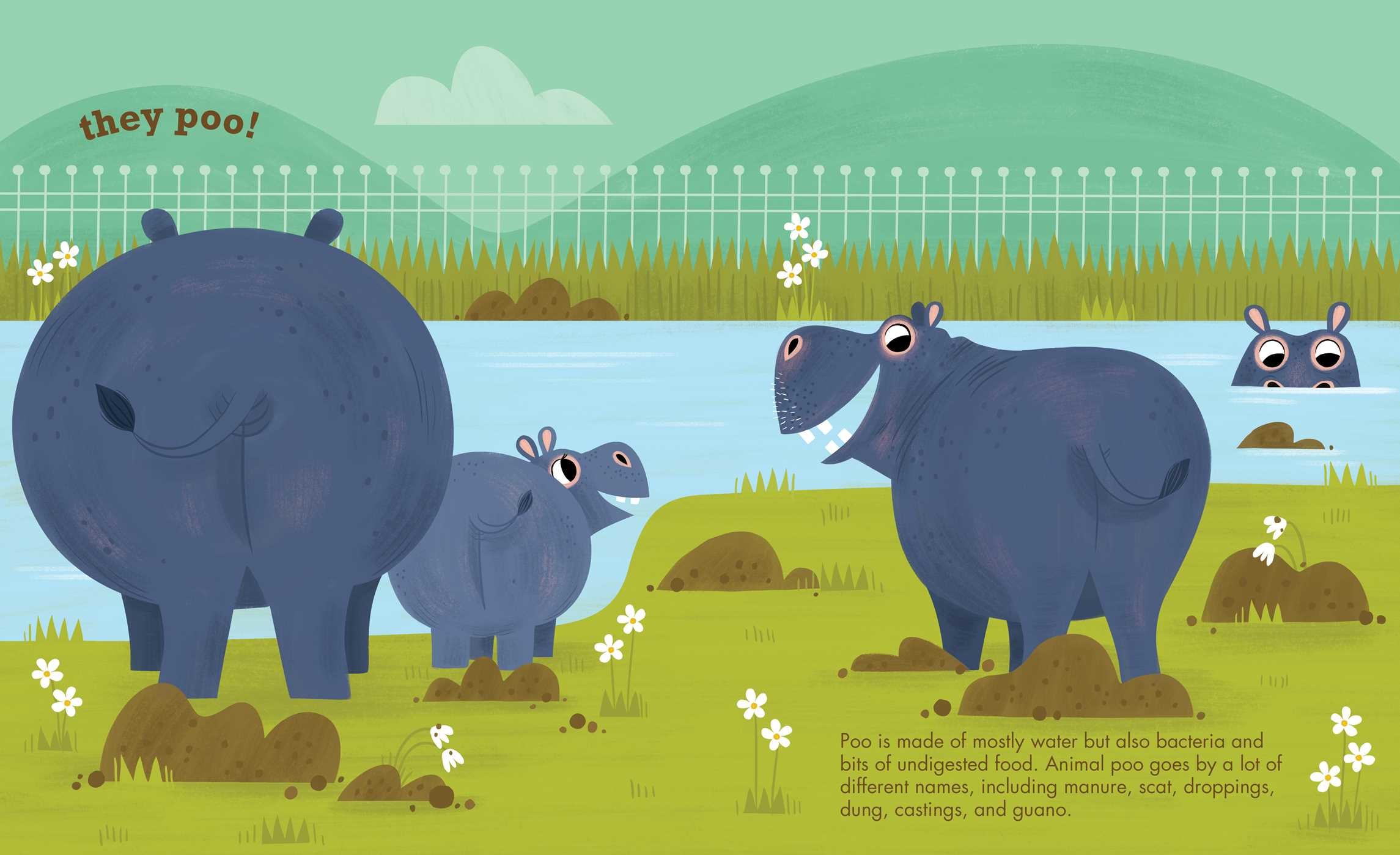 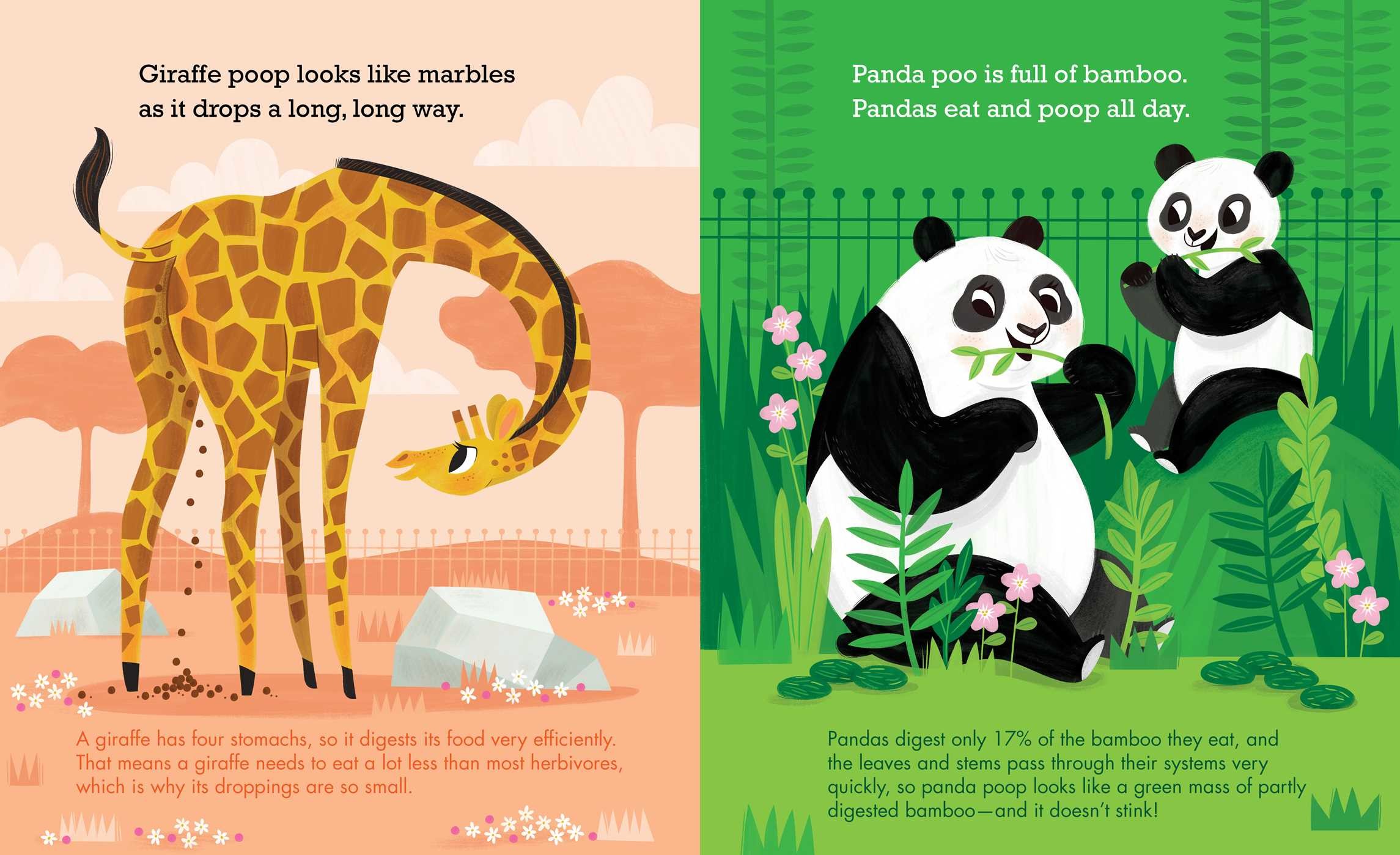 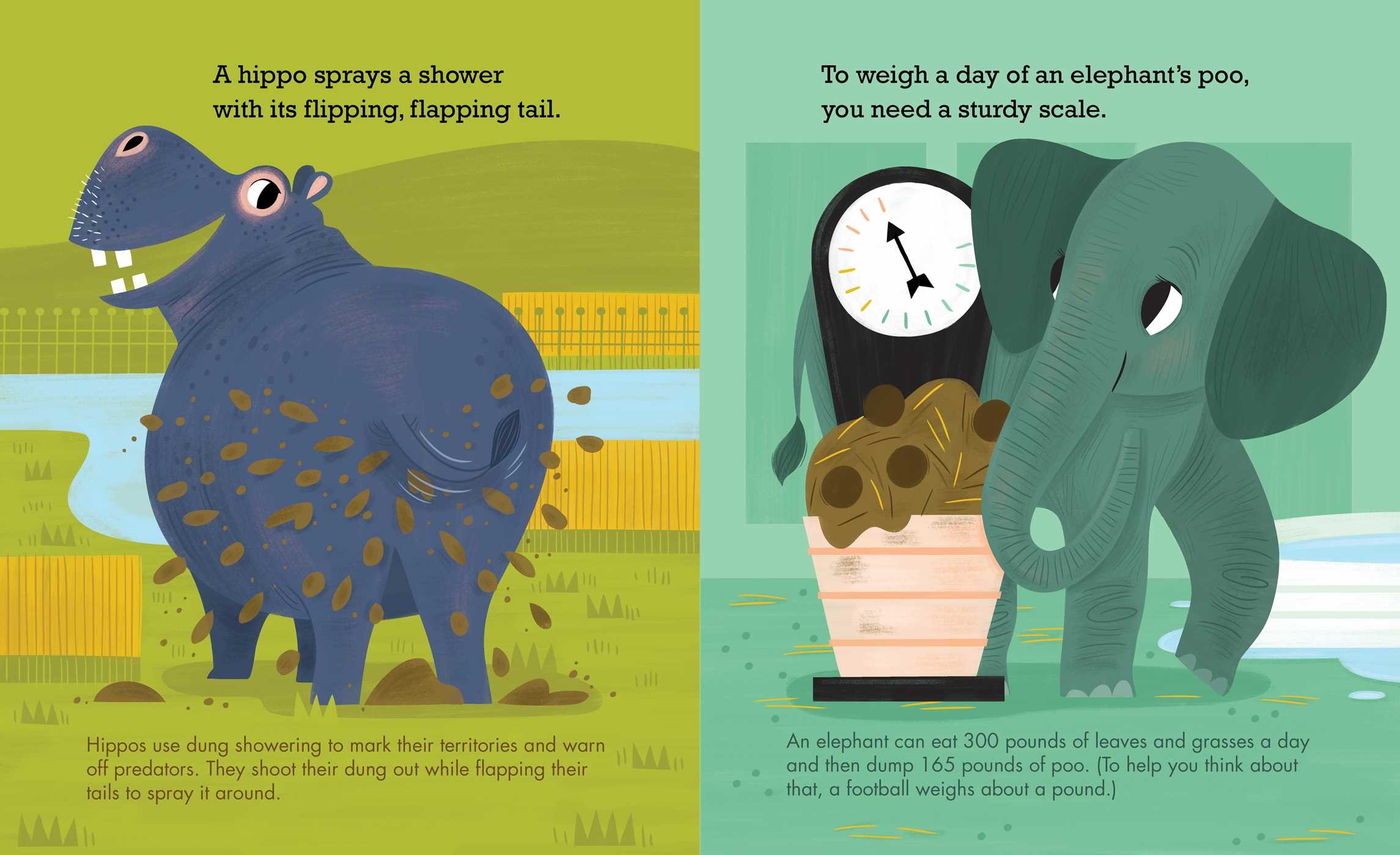 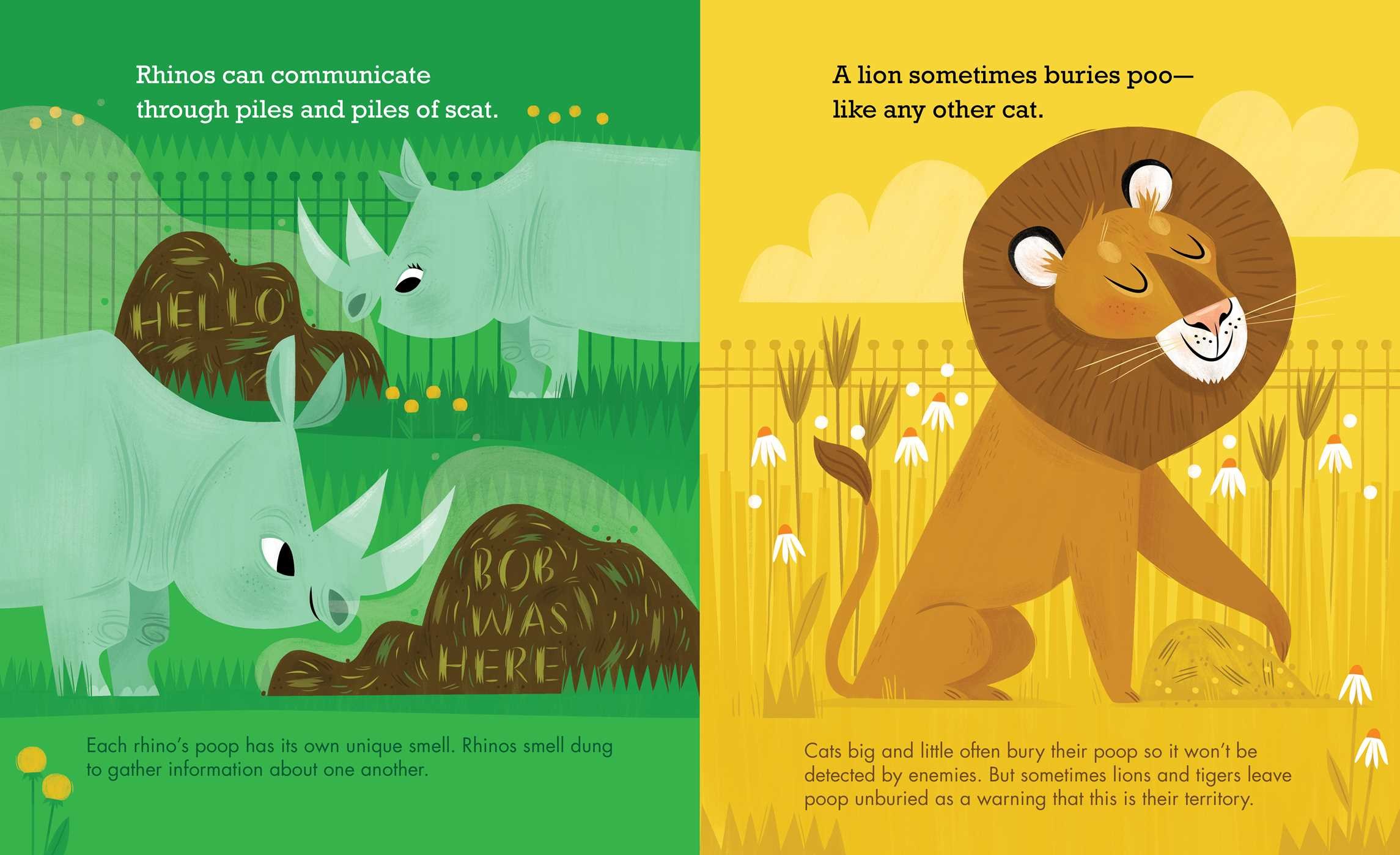 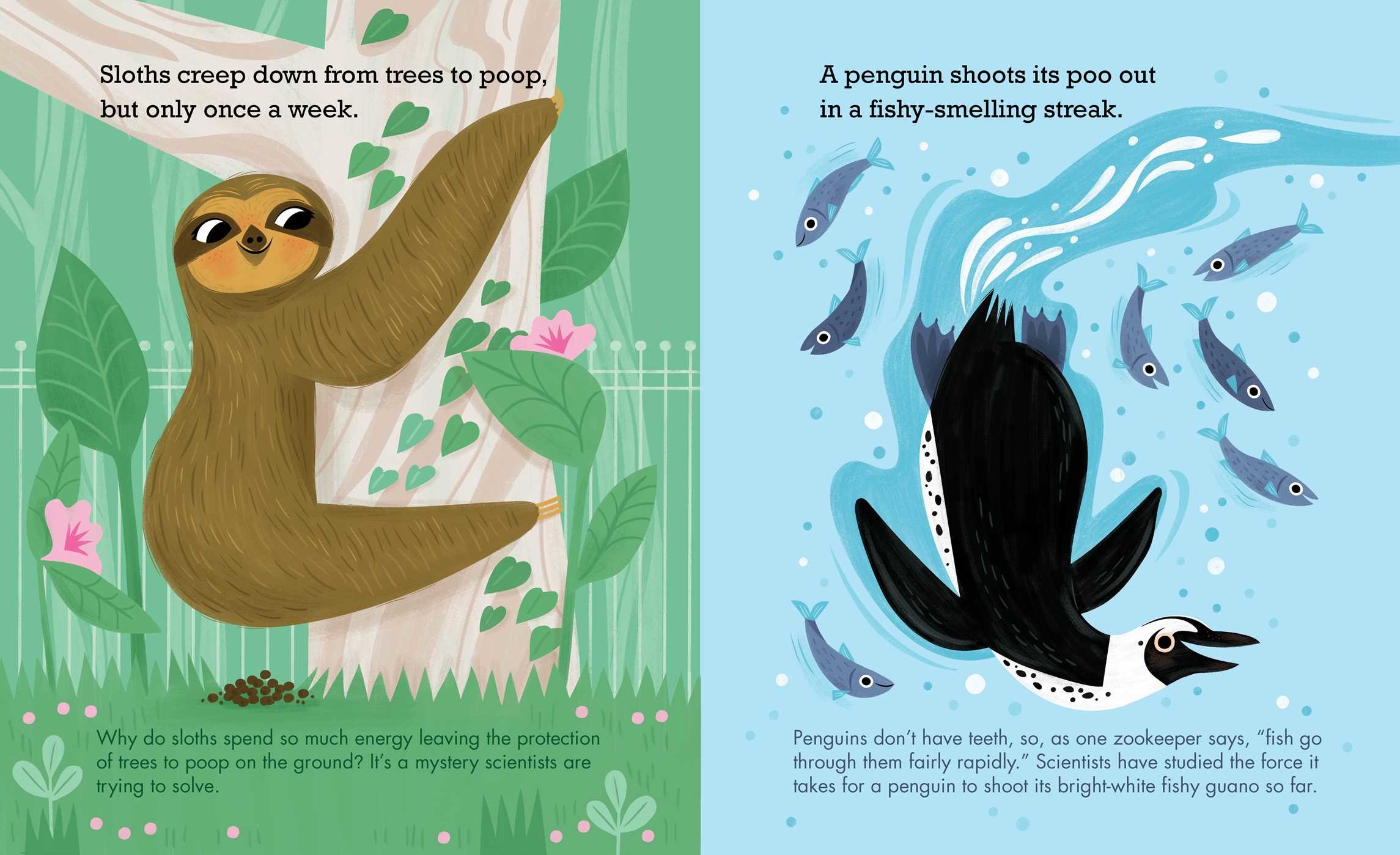 What Do They Do with All That Poo?

Find out what happens to all of the poo at the zoo in this funny and factual picture book!

There are so many different kinds of animals at the zoo, and they each make lots and lots (and sometimes LOTS!) of poo. So what do zoos do with all of that poo? This zany, fact-filled romp explores zoo poo, from cube-shaped wombat poo to white hyena scat, and all of the places it ends up, including in science labs and elephant-poo paper—even backyard gardens!

Jane Kurtz was born in Portland, Oregon, but when she was two years old, her parents decided to move to Ethiopia, where she spent most of her childhood. Jane speaks about being an author at schools and conferences—in all but eleven of the United States, so far, and such places as Uganda, Nigeria, Kenya, France, Germany, Romania, England, Indonesia, Cambodia, the Philippines, and Japan. She helped start Ethiopia Reads (EthiopiaReads.org), a nonprofit that is planting the first libraries for children in Ethiopia. She is the author of many books for children.

Allison Black is an illustrator and designer specializing in cute and colorful creations. Originally from upstate New York, Allison received her BFA at Syracuse University, and has since lived in Los Angeles, Minneapolis, and now Columbus, Ohio. Over the years, she has developed products ranging from baby bedding and toddler clothes to Christmas ornaments and Easter baskets. But no matter what she’s creating, she always brings a little Allison flair to the product through her illustration style, thoughtful design, and fanciful critters.

There’s quite a lot here to digest. In a mix of rhymed general statements and, in smaller type, pithy prose explanations, Kurtz drops nuggets of information about what poop is, how the excrement of a dozen types of zoo animals differs in shape and composition, what said animals do with their poop in nature, and the many ways zoos (and gardeners) study and recycle all those tons of “zoo-doo.” She closes with the provocative observation that more intelligent and socialized primates tend to fling their poop with more accuracy than their duller cohorts—as, perhaps, “a form of communication and self-expression.” Reflecting what young readers will be doing by this point, Black illustrates the author’s final sally with a troop of heartily laughing monkeys. In fact, all the creatures in these brightly colored cartoon illustrations, even the earthworms, are smiling. So are most of the notably diverse cast of human workers (a few pooper-scoopers look understandably beleaguered), as befits both the topic and the tone of this fresh scoop on poop. — John Peters

Any kid who’s been to a zoo knows that animal hygiene is not up to Mom’s standards. What might come as news are the very good reasons animals may have to leave their droppings where they drop, and the very good uses to which scat can be put. Rhymed verse rolls continuously along the top of spreads in oversized font, offering an introductory outline for the youngest listeners: “Sloths creep down from trees to poop, but only once a week./ A penguin shoots its poo out in a fishy-smelling streak.” A sentence or two in slightly smaller sans serif type adds nuance to the simple observations. And what about disposal? Kurtz’s explanations are largely satisfactory: some poo is trucked to landfills, some ends up in labs for study, some turns into compost (worms love to eat and re-poop the stuff), and some, like fiber-rich elephant poop, even appears later in the zoo gift shop as writing paper and greeting cards. Black’s toylike animals, with anthropomorphized grins, will hold more appeal for younger listeners, but the information will delight older, independent readers. What kid wouldn’t enjoy imagining a place where nobody tells you to flush, put down the seat, and wash your hands?

Kurtz (Planet Jupiter) playfully delves into the diversity of dung found at the zoo in her latest picture book. “A wombat’s poo is cube-shaped, so it isn’t very roly. / Some snakes poop only once a year. They digest their food sloooow-ly.” Simple rhyming couplets deliver the facts, with accompanying sentences providing additional detail (e.g., “Wombats are highly territorial. They each deposit 80–100 droppings every evening as a signpost to say ‘I’m here.’ ”). The first half of the book discusses how various creatures take care of back-end business, while the second describes how zoos manage all that manure (much of it is trucked to landfills, while some is composted into “Zoo Doo,” among other things). The brightly colored, cartoon-style illustrations by Black (Barnyard Boogie!) add levity, as hippos grin, sloths smile, and bats beam. Poop of various sizes is buried, sniffed, squirted, weighed, and even thrown. Young readers going through a bathroom-humor stage should enjoy the topic and the book’s light tone but, whether appreciative, awed, or grossed out, all will come away informed.

Countless zoo books line the shelves, but how often does one discuss animal manure—and how a zoo discards it? Employing the page turn to great effect from the very start, Kurtz is bound to get youngsters' attention: "At zoo after zoo / the animals chew. / And then … // they poo!" Quick rhymes in boldface type across the top make simple statements about each animal's toilet habits. "Sloths creep down from trees to poop, / but only once a week. / A penguin shoots its poo out / in a fishy-smelling streak." Smaller text below offers more in-depth facts: "Why do sloths spend so much energy leaving the protection of trees to poop on the ground? It's a mystery scientists are trying to solve." Black's wide-eyed, expressive animals have personality, but they never cross over to cartoony garishness. After exploring 12 different zoo dwellers, Kurtz then turns her focus to the large amount of poo that accumulates at a zoo every day. What do they do with it? Much is trucked to landfills, but zoos also study it in labs to help understand their animals better. Plus, there are compost options and even elephant-poo paper!....A scatological success. (Informational picture book. 3-8)

What Do They Do with All That Poo?