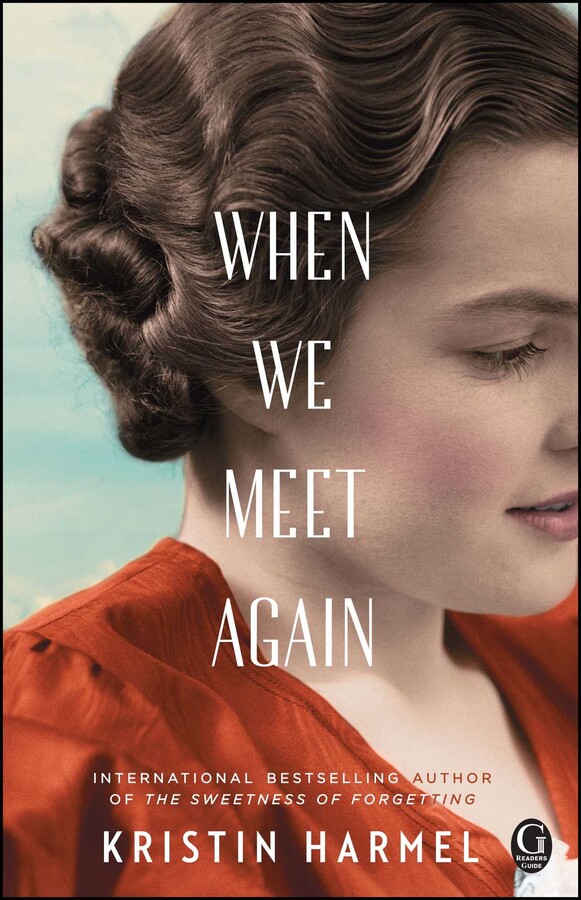 When We Meet Again

By Kristin Harmel
PRICE MAY VARY BY RETAILER

Emily thinks she’s lost everything…until a mysterious painting leads her to what she wants most in the world. The new novel from the author of international bestsellers The Sweetness of Forgetting and The Life Intended shows why her books are hailed as “engaging” (People), “absorbing” (Kirkus Reviews) and “enthralling” (Fresh Fiction).

Emily Emerson is used to being alone; her dad ran out on the family when she was a just a kid, her mom died when she was seventeen, and her beloved grandmother has just passed away as well. But when she’s laid off from her reporting job, she finds herself completely at sea…until the day she receives a beautiful, haunting painting of a young woman standing at the edge of a sugarcane field under a violet sky. That woman is recognizable as her grandmother—and the painting arrived with no identification other than a handwritten note saying, “He always loved her.”

Emily is hungry for roots and family, so she begins to dig. And as she does, she uncovers a fascinating era in American history. Her trail leads her to the POW internment camps of Florida, where German prisoners worked for American farmers...and sometimes fell in love with American women. But how does this all connect to the painting? The answer to that question will take Emily on a road that leads from the sweltering Everglades to Munich, Germany and back to the Atlanta art scene before she’s done.

Along the way, she finds herself tempted to tear down her carefully tended walls at last; she’s seeing another side of her father, and a new angle on her painful family history. But she still has secrets, ones she’s been keeping locked inside for years. Will this journey bring her the strength to confront them at last?

This reading group guide for When We Meet Again includes an introduction, discussion questions, and ideas for enhancing your book club. The suggested questions are intended to help your reading group find new and interesting angles and topics for your discussion. We hope that these ideas will enrich your conversation and increase your enjoyment of the book.

When a mysterious painting arrives out of the blue at Emily Emerson’s door, all the heartache and uncertainties in her life bubble to the surface: she is out of work, her mother and grandmother are dead, she isn’t speaking to her father, she abandoned the love of her life, and she gave up her only child for adoption. The painting, which depicts a familiar-looking young woman in a field under a violet sky, stirs a desire in Emily to reconnect with her long-estranged father in an effort to find the grandfather she never knew. Emily and her father travel from Florida to Germany to Georgia and back again, and along the way uncover a family history both beautiful and tragic. In the end, Emily learns about the healing power of art, forgiveness, and love.

1. Our first encounter with Emily Emerson involves her lying in bed on a Friday morning, discouraged and alone. The scene is broken by a telephone call from her former editor, letting her know a package arrived for her—a package we later learn is the painting of Grandma Margaret. How did you initially characterize Emily? Did you feel sorry for her? Is she a likeable character? Without the arrival of the painting, do you think she would have snapped out of her depression? Why or why not?

2. Very early in the novel, the topic of abandonment arises. Emily’s grandfather abandoned her grandmother and father; her father abandoned her; she abandoned Nick and her daughter, Catherine. Discuss this abandonment motif, considering how each of the characters reacts in the wake of being left behind. Does the title—When We Meet Again—hint at reconciliation? Do you think all of the characters find reconciliation in the end? Why or why not?

3. Discuss the structure of the narrative. How does the weaving between the past and present-day story lines affect your understanding of the characters? Do you think this “time travel” allows the story to belong to both Emily and her grandparents? How would the story change if we only had Emily’s point of view?

4. On page 33, Jeremiah tells Emily, “sometimes, when one is living with a broken heart, it’s too hard to give voice to the stories that hurt the most.” Consider the ways in which silence shapes the lives of these characters. Is what is not said a defining aspect of life for Emily, her father, her grandparents, etc.?

5. “Do you really think one bad experience has the power to change a person’s character . . . ?” Myra asks Emily, and she replies that yes, “if you love someone enough and they hurt you deeply, it can change you forever” (pages 70–71). Answer Myra’s question for yourself. Did Grandma Margaret change as a result of her love affair with Peter? Did Peter? In what ways?

6. How is Margaret a symbol of American ideals—specifically life, liberty, and the pursuit of happiness? In what ways is she the antithesis of these principles? Consider her relationship with her family, Jeremiah, Peter, and Emily in your response.

7. Evaluate Franz Dahler’s character. Do you blame him for allowing Peter to leave his family, his home, and his country? Do you think he could have changed the course of Peter’s life if he had stood up to their father? Is he similar to many of the other characters in that he can “never forget that which you regret” (page 166)?

8. What role does World War II play in the novel? Do all of the characters’ suffering and joy happen as a result of the war?

9. On page 184, Peter declares, “From this moment forward, I am no longer a Dahler.” Consider the ways in which troubled parent/child relationships are the sparks that cause the characters to change their lives and their identities—in some cases very literally. Discuss in relation to the moment when Victor tells Emily, “That’s what being a parent is: loving someone so much that they’ll be a part of you forever, no matter what” (page 190).

11. A possible theme for the novel emerges on page 329 when Louise asks Peter, “You ain’t gonna hold a grudge, are you?” Which character seeks forgiveness most? You might consider Emily, Victor, Peter, Louise, Franz, Margaret, or Ingrid in your response.

12. Were you surprised when Nick arrived at Emily’s doorstep? Do you think Nick and Emily are fulfilling the love story that Peter and Margaret never got to have?

13. Ultimately, do you think the painting is responsible for changing Emily’s life? Reflect on the changes in her relationship with her father, Nick, Catherine, and herself. Do you think art has the power to transform the way we understand the world? Why or why not?

1. Peter and Margaret share a passion for the works of Ralph Waldo Emerson—a poet, essayist, and philosopher who defined the nineteenth-century American literary scene. Spend some time with Emerson in your book club meeting, paying particular attention to his famous essay “Self-Reliance.” Why do you think Peter and Margaret were so drawn to Emerson’s philosophy? Does the pair embody Emerson’s famous saying “A foolish consistency is the hobgoblin of little minds, adored by little statesmen and philosophers and divines,” which suggests that we must always think for ourselves? Share with the group your understanding of Emerson’s belief in the individual. Have you faced a moment in your life, like Peter and Margaret, where you chose to “be yourself in a world that is constantly trying to make you something else” (page 60)?

2. “I was floored to learn that nearly four hundred thousand Germans had been imprisoned in the United States during the 1940s, but that newspaper coverage of the POW camps was limited, so many Americans didn’t even know about them. Most of the prisoners had been captured in battle or on German U-boats and had been brought to the States to work” (page 65). Were you as shocked as Emily to learn about the POW camps in the United States during World War II? Consider reading a different take on this unusual piece of World War II history in Summer of My German Soldier by Bette Greene. Compare and contrast this book with When We Meet Again. What themes do the two share? Did the characters face similar prejudices?

3. The fictional Ralph Gaertner’s paintings are compared to the realist twentieth-century American artist Andrew Wyeth, though Wyeth “painted subjects in a much different kind of landscape, mostly in the northeast region” (page 123) of the United States. With your book club, host an art night. Over appetizers and drinks, preview some Andrew Wyeth paintings (andrewwyeth.com). Do the paintings appear as you might have imagined Gaertner’s? Are they different? How so? Does it seem that Wyeth agrees with Gaertner that “to paint a face was too intimate; it was like baring a person’s soul to the world without their permission” (pages 123–124)? Why or why not? 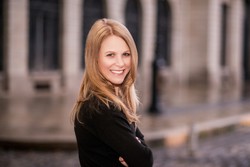 Kristin Harmel is the New York Times bestselling author of a dozen novels including The Book of Lost Names, The Winemaker’s Wife, The Room on Rue Amélie, and The Sweetness of Forgetting. She is also the cofounder and cohost of the popular web series, Friends and Fiction. She lives in Orlando, Florida.

“Harmel’s newest book, WHEN WE MEET AGAIN, is perhaps one of the most moving and powerful stories of all time, and potentially one of her best entries in the field thus far.”

"Richly told and emotionally evocative, WHEN WE MEET AGAIN, is a novel with a wide and thrilling sweep, and an impossible to resist hook: a beautiful painting of a mysterious woman surfaces as if from nowhere. Who is she? Who is her artist?... In this complex and poignant novel, through gorgeously crafted prose and wonderfully nuanced characters, we are reminded of the indomitability of the human spirit and of the redemptive power that follows once we have made peace with our past."

“Kristin Harmel writes with such insight and heart that her characters will stay with you long after you’ve finished her books.”
—New York Times bestselling author Emily Giffin

"Centering on a lesser-known facet of American history, WHEN WE MEET AGAIN is a gripping novel of history, art, and the power of love. Kristin Harmel’s work is always riveting but her storytelling reaches new heights with a tale that is layered, complex, and satisfying to the last page."

When We Meet Again

By Kristin Harmel
PRICE MAY VARY BY RETAILER